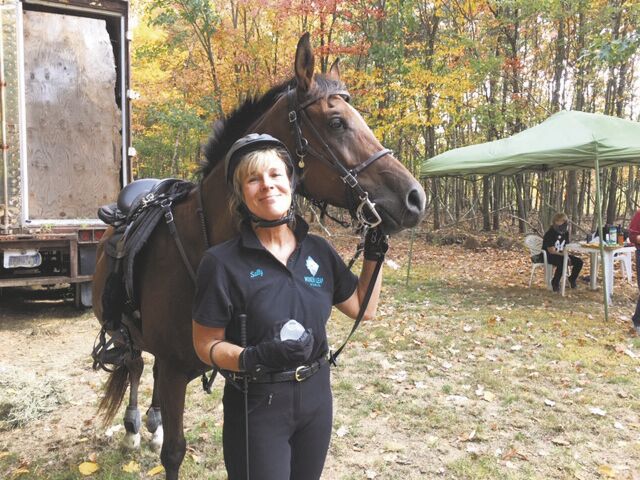 Sally Jellison, organizer of the hunter pace competition in northern Northumberland County, takes a water break with “Roo,” her 7-year-old full-bred Arabian, during the competition on Sunday. 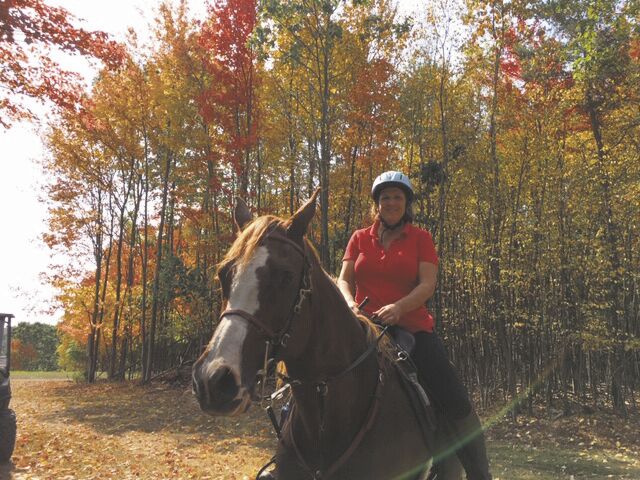 Anne Shea, of Pennsdale, gets back on the trail with “Geronimo” during hunter pace competition on Sunday in Delaware Township, Northumberland County. 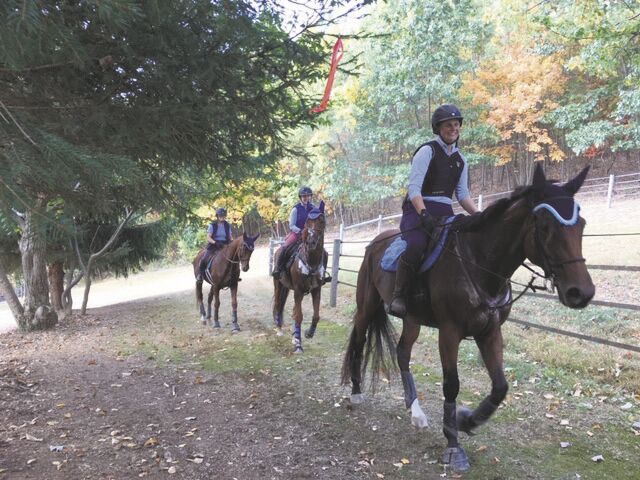 Sally Jellison, organizer of the hunter pace competition in northern Northumberland County, takes a water break with “Roo,” her 7-year-old full-bred Arabian, during the competition on Sunday.

Anne Shea, of Pennsdale, gets back on the trail with “Geronimo” during hunter pace competition on Sunday in Delaware Township, Northumberland County.

MUNCY — When Sally Jellison moved to Northumberland County about three years ago, she was disappointed that no one held a hunter pace competition.

In a hunter pace, competitors ride their horses through the woods on a marked trail that includes obstacles and jumps to simulate a foxhunt.

“When we permanently moved here, I was sad nobody did a foxhunt or hunter paces,” said Jellison, 57, who moved with husband, John Dugan, and daughter, Charly, from New Jersey, just outside of New York City, to the rural Delaware Township property they already owned.

So they started holding the hunter pace events. They held the third one in three years on Sunday, with the help of neighbors who volunteered to help out at the checkpoint and other duties.

“I wanted to reach out to the equestrian community,” said Jellison, who previously worked in New York City and has been riding in endurance competitions for 20 years.

Jellison, who competed with her daughter, Charly, in the Big Horn 100 in Wyoming over 24 hours this summer and competed in the Mongolian 1,000 (kilometer) race in the Mongolian steppes last year, Sunday rode “Roo,” a 7-year-old full-bred Arabian who is the number one endurance horse in the Northeast United States.

Anne Shea, of Pennsdale, in nearby Lycoming County, rode in the competition on, “Geronimo,” a 19-year-old Arabian gelding that Jellison previously owned.

“I would say the trails are very technical,” Shea said during a mandatory break in the 7.2-mile course to give the horses water and carrots.  “There are a lot of hills, up and down. He (Geronimo) loves it. He’s been doing this pretty much all his life.”

Miner, who rode in the hunter pace event, said it’s a nice experience for the horses.

“We do this to give them experience outside of the show arena,” she said.

Lewisburg veterinarian Dr. Marlo Egleston, longtime vet for Dugan’s and Jellison’s horses, as well about 600 other farm animal owners, took part in the hunter pace, but walked her horse through.

“My horse doesn’t jump,” she said.

Dugan said there are three categories in the competition, essentially, fast, medium and slow. Riders go out before the competition and ride the trail at those various paces to determine pace times. The riders who come closest to each of the pace times wins a ribbon. He said his wife was not eligible to win a ribbon.

Jellison holds the competitions as fundraisers. Sunday’s event drew 16 competitors from the Valley and from as far away as State College and Mechanicsburg. The event raised about $1,200 for the two children of a woman who was killed in a horseback riding accident in August. Jellison did not identify the family because she wanted to protect their privacy.