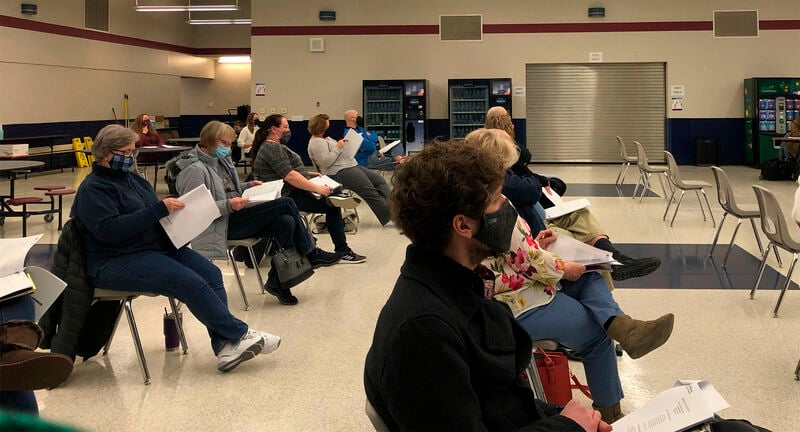 Members of the public sit inside the Shikellamy High School cafeteria Thursday night for an Act 34 hearing for the proposed Chief Shikellamy Elementary School project, which would consist of adding 17,514 square feet onto the existing 61,634 square foot structure in Upper Augusta Township.

Members of the public sit inside the Shikellamy High School cafeteria Thursday night for an Act 34 hearing for the proposed Chief Shikellamy Elementary School project, which would consist of adding 17,514 square feet onto the existing 61,634 square foot structure in Upper Augusta Township.

SUNBURY — The Shikellamy School District board of directors will vote on whether to close Beck Elementary at the March 11 school board meeting.

Prior to a work-session Thursday night, an Act 34 public hearing was held inside the Shikellamy High School auditorium for the proposed construction project at Chief Shikellamy Elementary School, in Upper Augusta Township.

Act 34 of 1973 requires that a public hearing be held on all new construction and substantial additions.

The construction project includes shuttering Beck Elementary and transforming the building into district administration offices as well as hosting sixth- through 12th-grade virtual academy classes. The district would also rent a section to the Intermediate Unit, according to directors.

The move will save the district $1.25 million based on the restructuring, according to school directors.

The cost of the project is around $4.8 million for the additions and renovations of the 61,634 square foot building.

The proposal is to add 17,514 square feet to the existing structure in order to expand and add classrooms.

Superintendent Jason Bendle said the construction will include the addition of 13 classrooms for third through fifth grades.

The Act 34 hearing lasted 30 minutes and there were no public comments. Solicitor Mike Lavin said the school board would accept written comments or concerns for the next 30 days.

The Schrader Group, LLC, a Lancaster architect, was paid $259,669 for the plans that would be bid out to any contractor who is interested in the project if it's approved by the board.

In July, more than 300 people attended a Zoom meeting to voice concerns about the spending and the closure of Beck Elementary.

Freeman said the prom will be for the junior and senior class and will be held outside at the Shikellamy Stadium on May 1.

"We are excited about this," Freeman told the board. "These will be awesome events."

Freeman said graduation will be held on June 4.

Bendle said families of graduates will be able to receive four tickets but the district is hoping more restrictions will be lifted by the state in order to increase in the number of people able to attend.

The March 11 meeting will be held at 7 p.m. inside the Shikellamy High School cafeteria.