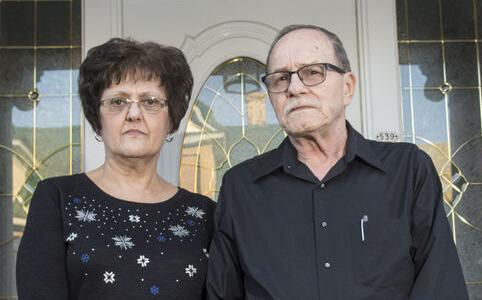 Robert Inglis/The Daily Item Donna and Jim Gotlob both have had COVID-19 this year and Donna lost her parents Josephine and Larry Novack to the illness this year. 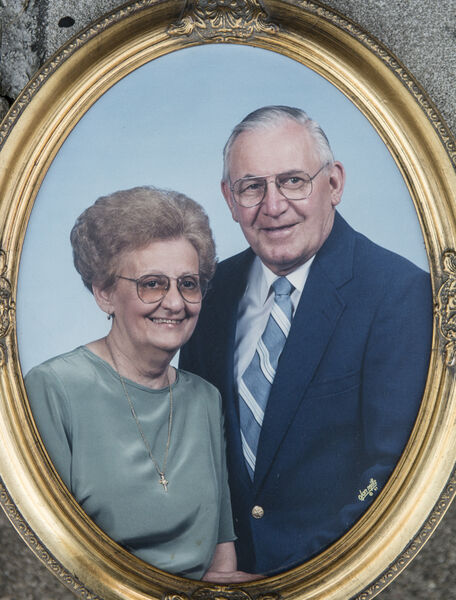 Robert Inglis/The Daily Item Josephine and Larry Novack both passed away due to COVID-19 earlier this year. 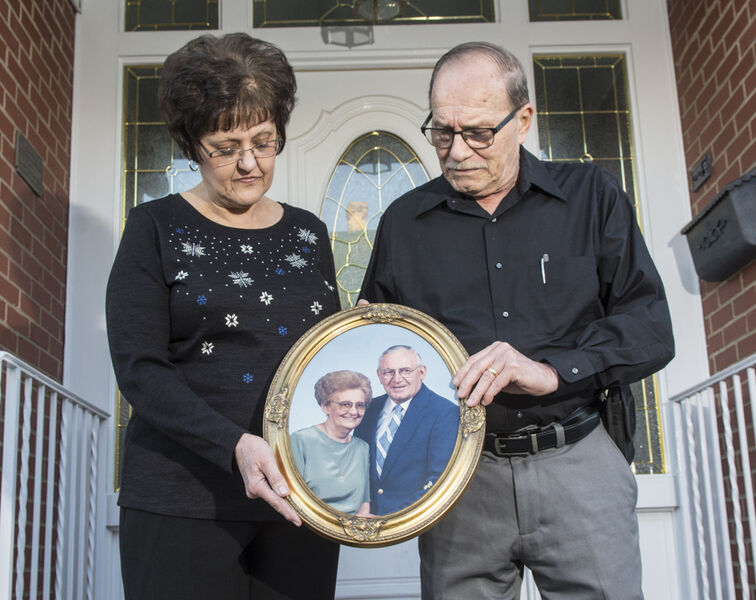 Donna and Jim Gotlob look at a photo of Donna's parents, Josephine and Larry Novack, who both died from COVID-19 this year.

Robert Inglis/The Daily Item Donna and Jim Gotlob both have had COVID-19 this year and Donna lost her parents Josephine and Larry Novack to the illness this year.

Robert Inglis/The Daily Item Josephine and Larry Novack both passed away due to COVID-19 earlier this year.

Donna and Jim Gotlob look at a photo of Donna's parents, Josephine and Larry Novack, who both died from COVID-19 this year.

James Gotlob buried his wife’s parents when they died of COVID-19 and today the Sunbury funeral director will do the same for one of Donna Gotlob’s cousins.

Donna, 70, of Sunbury, says 10 people in her family contracted the disease this year including James, 74, and herself. She carries the burden of having unknowingly spread it among all but two of them.

“I never ever thought by me doing somebody’s hair that I would contract COVID,” said Donna, a professional hairstylist who for a half-century operated a salon from her parents’ Shamokin home.

The Gotlobs volunteered to share their story in an effort to encourage others to follow health-safety standards amidst the novel coronavirus pandemic: wear a mask, maintain social distance, practice good hand hygiene.

Donna said she contracted COVID-19 from an elderly client while styling the woman’s hair inside a Shamokin high-rise in late August. She didn’t know it. Neither of them had symptoms.

The weekend after, Donna’s family had a christening and outdoor reception. It was limited to their family but no one wore masks, she said.

The next day, she fell ill. James soon followed. Donna felt tired and sick all over, her head and sinuses grew particularly painful and she eventually began to lose taste. James grew weak and had stomach troubles.

Donna said a physician’s assistant prescribed antibiotics via a telemedicine visit. She abided and later in the week returned to work at her shop. She got a call from her client’s daughter, the 95-year-old woman from the high-rise, confirming she’d tested positive for COVID-19. Donna said she panicked at first but did tell two clients who were at the shop. She then called her doctor and arranged for testing in Bloomsburg on a Friday in early September.

James worked; he had a funeral service but hadn’t yet learned of his wife’s eventual diagnosis. He said he grew so weak that an assistant had to dismiss the family from the service at a Sunbury church.

“I was just dragged out. I had all the symptoms other than fever. I lost 10 pounds,” James said.

The next day, Donna learned she tested positive. Her husband was a presumed positive, too, she said.

The Department of Health called for contact tracing, Donna said. They alerted her customers from her shop and her visits to local high-rises.

“To my knowledge, I didn’t infect anyone else. It was the family members who all got it,” Donna said. “In the meantime, both my daughters were sick. In succession, every day somebody was going for a test.”

Eight relatives including the Gotlobs contracted COVID-19, Donna said. Two additional relatives from out of the area came down with the disease, unrelated to her own, more recently.

The disease took hold of Donna’s parents, Larry and Josephine Novack. They were 93 and 90 years old, respectively, and their ages alone put them at high risk of severe illness. Josephine had advanced Alzheimer’s disease, too, Donna said.

While Larry seemed to have pulled through, Donna said, neither survived. Josephine died Sept. 30 and Larry followed Oct. 12.

James, who operates Olley-Gotlob Funeral Home in Sunbury, handled both of their funerals.

The Gotlobs said they’ve acted cautiously throughout the pandemic. They said they’ve followed recommended health-safety protocols including for their respective businesses. James is a deputy coroner for Northumberland County, too.

“I’ve been precautious from day one. You have to be working around all these people. It’s real. There’s no joking around about this,” James said.

Donna said she continues to see clients at her salon but hasn’t returned to the high-rises. She struggles to spend time at her business knowing her parents for so long were always upstairs.

“For me to open that door to my mom and dad’s house and have it empty and cold, I’m not sure how long I can keep this up,” Donna said.