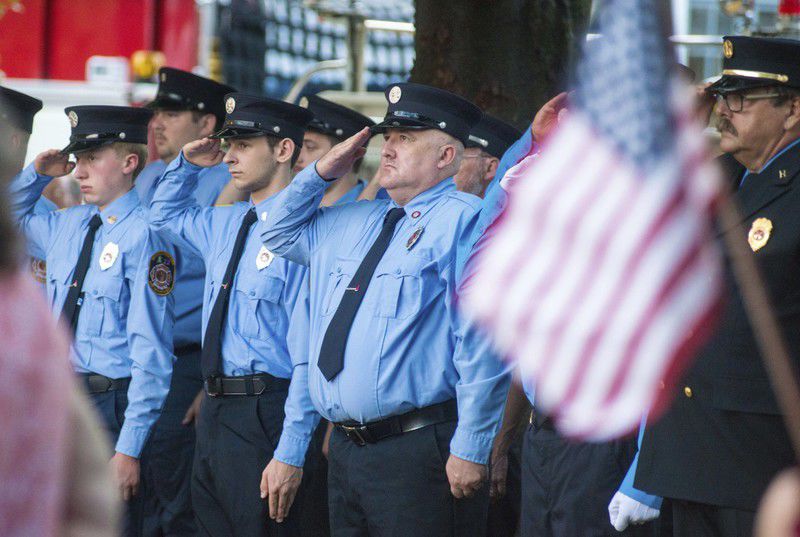 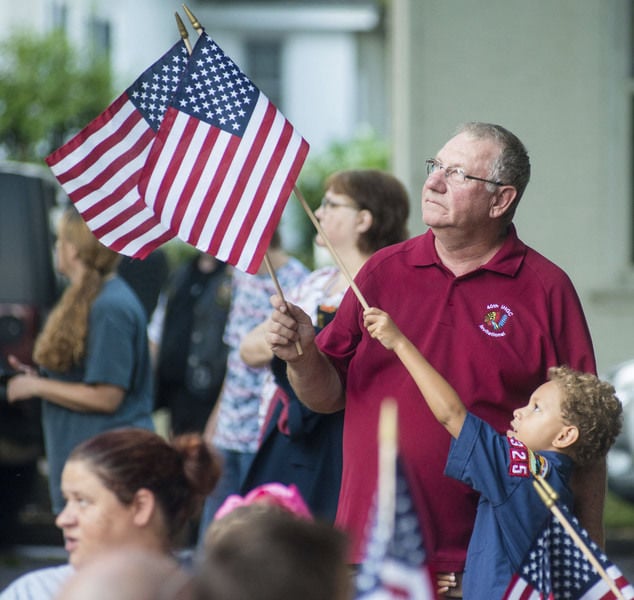 Dan Ramer, of Northumberland, and his seven-year-old grandson, Isaac Ramer, hold up their flags during Wednesday's 9/11 memorial service in Northumberland. 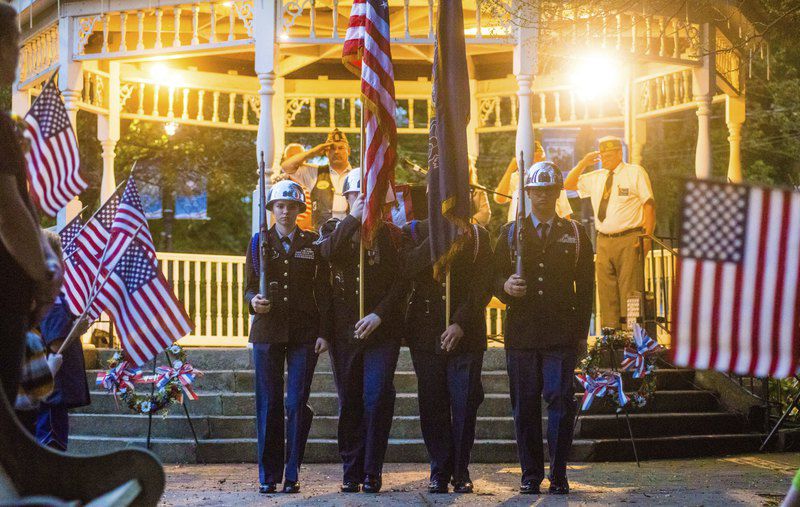 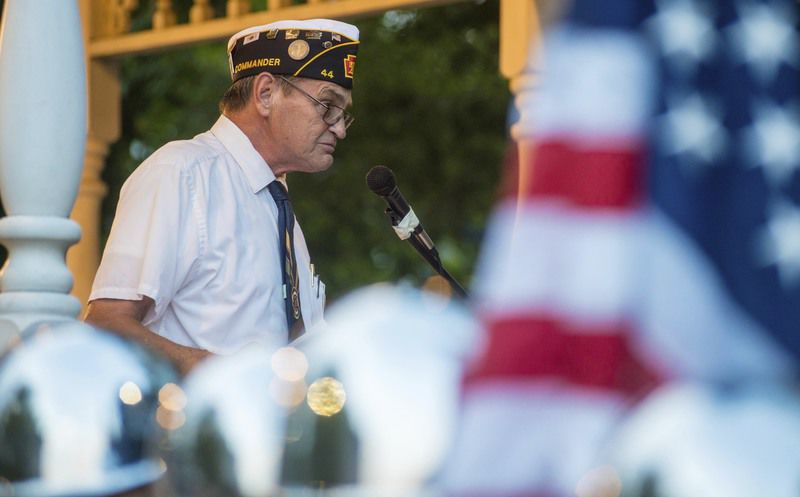 Richard Simpson, of the American Legion Post 44, speaks to the crowd during Wednesday's 9/11 memorial service in Northumberland. 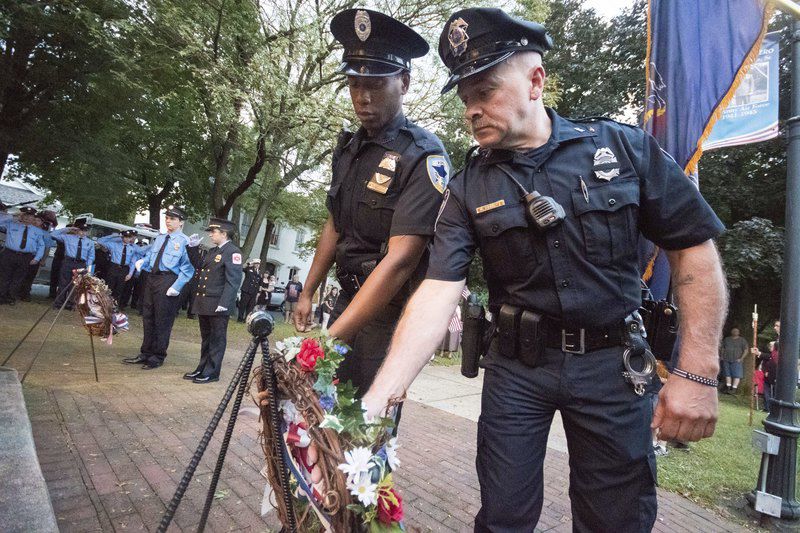 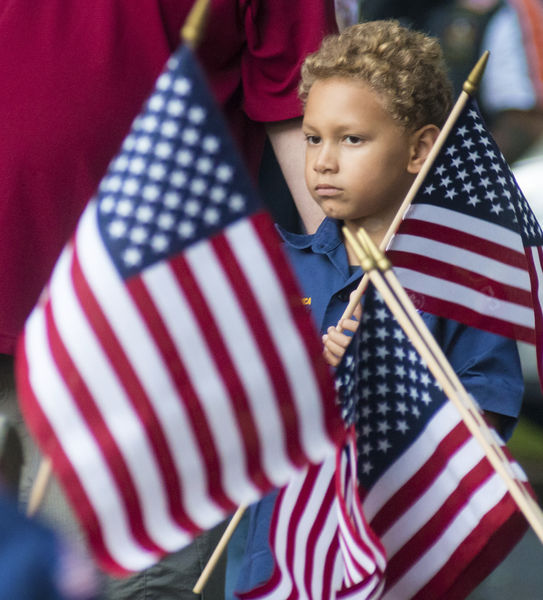 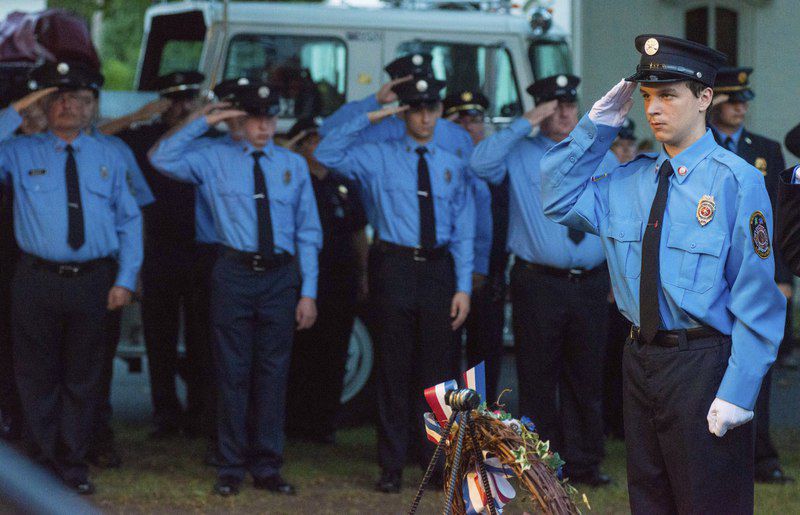 Dan Ramer, of Northumberland, and his seven-year-old grandson, Isaac Ramer, hold up their flags during Wednesday's 9/11 memorial service in Northumberland.

Richard Simpson, of the American Legion Post 44, speaks to the crowd during Wednesday's 9/11 memorial service in Northumberland.

NORTHUMBERLAND — Crowds throughout the Valley gathered to honor the memory of those who died on 9/11 in terrorist attacks at the Twin Towers, the Pentagon and United Flight 93, in Shanksville.

She and other East End members joined firefighters from the Southside Fire Company, Lower Augusta Township Fire Company and the Goodwill Hose Company. Southside's Adam Nuss came up with the idea throughout the borough, Fire Chief Nicholas Fowler said.

At the King Street Park Gazebo in Northumberland, a separate crowd braved the thunderstorm for a solemn 30-minute ceremony. It was comprised of police, fire and rescue personnel from Northumberland Borough and Point Township, American Legion Post #44 members, area residents, a Shikellamy High School color guard, JROTC, and a contingent of students from St. Louis de Monfort Academy, in Herndon.

The 18th Anniversary of that "horrific day," said Richard Simpson, of the American Legion, "seemed the right time to urge those who were old enough to remember that fateful day to tell their children, who weren't born yet, about that day. We must never forget what happened, and not just those innocents who died in the attack, but the first responders who ran into the buildings to help people get out. And didn't survive."

"This day makes me so sad," said Sonia Morales, who made it a point to come from Sunbury with her two young children to honor the fallen. "I am originally from New Jersey. I was home with my parents when the news came on the TV. I'll never forget that moment. Never."

This was the point made by Pa. Rep. Lynda Schlegel Culver in her emotionally powerful keynote speech. "We are here to remember the moment that changed our world 18 years ago today," she said.

In everyone's life there are moments, Culver said, "that have impact. Moments that you can recall with the most accurate of detail. Where you were, what you were doing. Those small moments become frozen in time. But it is not often that an entire country has that same, memorable moment at the same time. Where were you on Sept. 11, 2001?"

It is in these moments that make or break us, she said, "and define our character. This was a moment we must never forget and impart on the generation after us that didn't bear witness to this.

"We must not reflect on the carnage, but on the courage," she said. "Not on the terrorism, but on the heroism, and not on our vulnerabilities, but on our resilience. And how from those ashes, we came together, united as a nation."

Earlier in the day, there was a particularly poignant moment at Susquehanna University, when students, faculty and staff gather at the 9/11 memorial that honors Colleen Supinski '96 and Chris Vialonga '93.