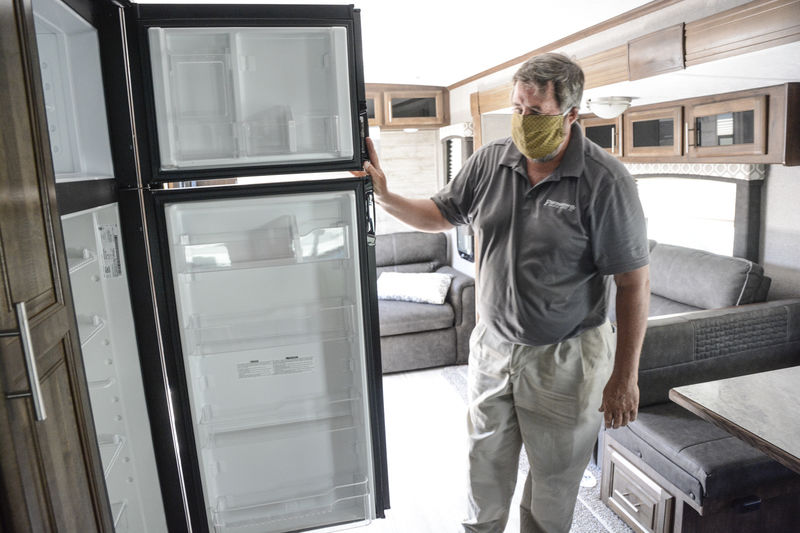 Robert Inglis/The Daily Item Gary Farnsworth of Fansworth Camping Center in Elysburg talks about some of the amenities in one of the campers for sale at his business. 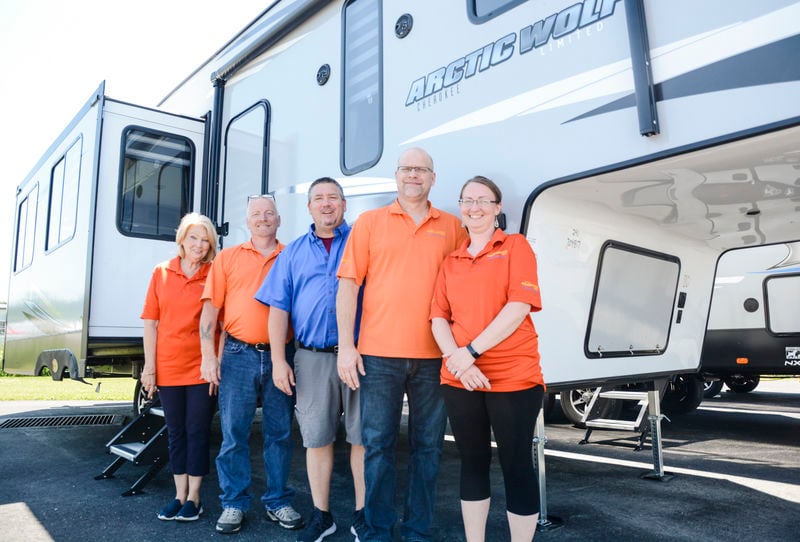 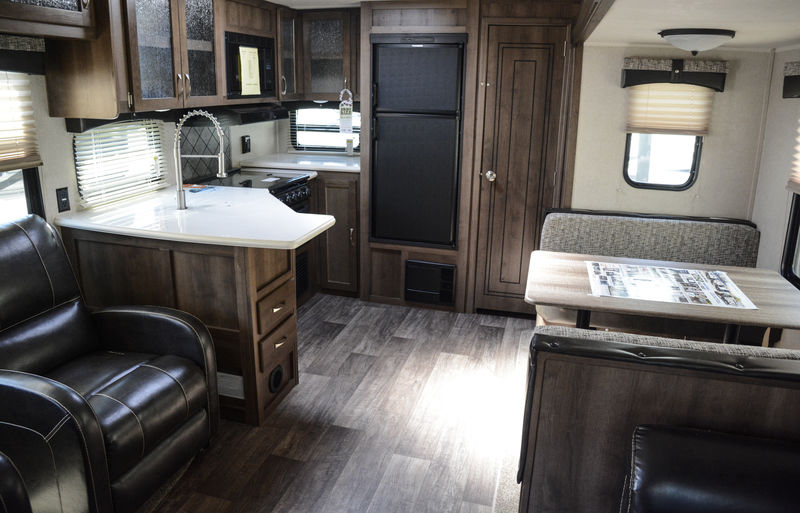 Robert Inglis/The Daily Item A kitchen and dining space inside one of the campers for sale at Farnsworth Camping Center in Elysburg. 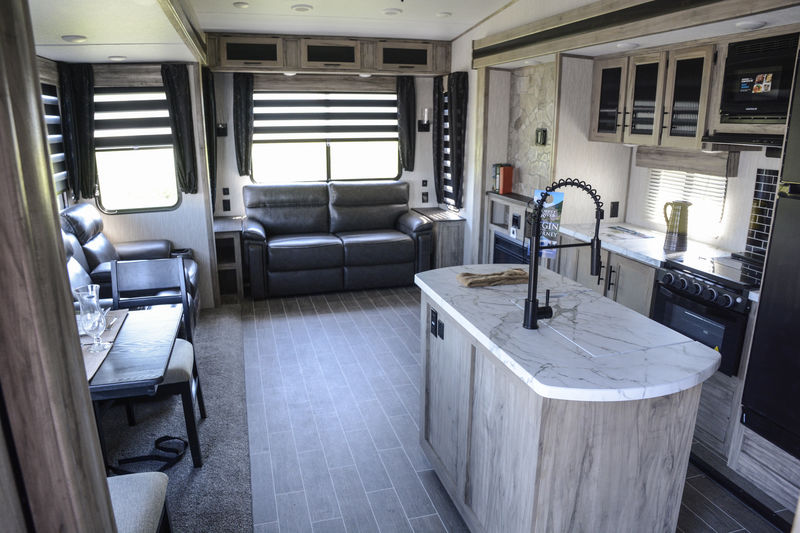 Robert Inglis/The Daily Item Susquehanna RV has a variety of campers with different amenities for sale at the Selinsgrove location. 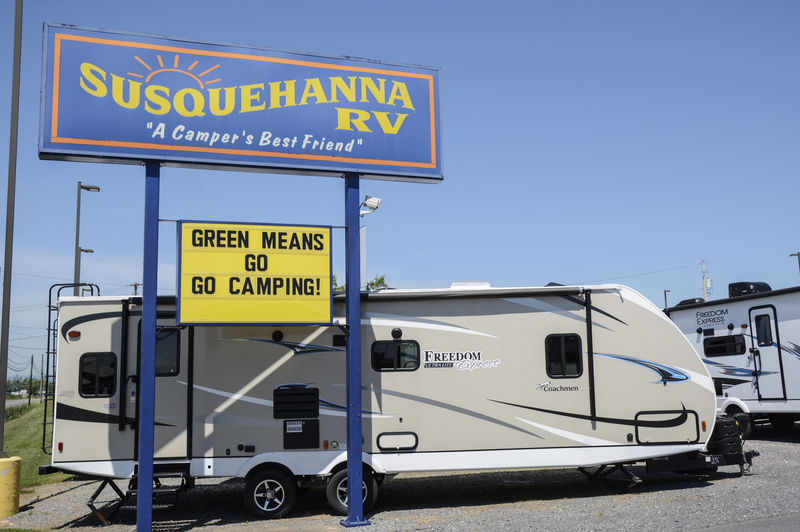 Robert Inglis/The Daily Item Gary Farnsworth of Fansworth Camping Center in Elysburg talks about some of the amenities in one of the campers for sale at his business.

Robert Inglis/The Daily Item A kitchen and dining space inside one of the campers for sale at Farnsworth Camping Center in Elysburg.

Robert Inglis/The Daily Item Susquehanna RV has a variety of campers with different amenities for sale at the Selinsgrove location.

Coronavirus caused RV showrooms to close indefinitely and effectively canceled the start of an annual jump in sales each spring, but Valley dealers say it also inspired a stronger market than anticipated as business returned.

“It’s like working at a convenience store. Go pick something out and bring it to the counter. We’re that busy,” Hartz said.

Farnsworth Camping welcomed an even split of customer-types — some new to the market and others seeking an upgrade, the owner said.

“We’re all seeing an uptick and I think it’s going to keep moving up,” Farnsworth said.

That’s because there’s sudden hesitance to air travel, cruise lines and overnight stays at unfamiliar lodging as a result of the coronavirus and its related disease COVID-19, both Farnsworth and Hartz said.

The RV Industry Association cites a survey by Ipsos, a global market research firm, that found one in four Americans will use an RV in the next year. Some dealers report as much as a 170 percent increase in sales for May compared to last year, according to the trade association.

Cabin fever played a part, Hartz said. Pennsylvanians were under stay-at-home orders for about six weeks before restrictions eased. The federal stimulus payments made to Americans helped, too, Hartz said.

A major complication is supply. Shipments of RVs declined from 504,000 in 2017 to 406,000 in 2019, according to the RV Industry Association. The trade association cited projections of 410,000 shipments in 2020 but manufacturing halted as the virus spread and disrupted the economy.

Though the buyer returned to storerooms, the stock isn’t on hand for them to take home immediately.

“It’s tough right now because the manufacturers are backed up, too. It is getting hard to get inventory; actually, even in our parts store. That’s been a real hard part of this,” Farnsworth said.

Dave Heitsenrether, of Curwensville, Clearfield County, drove to about five dealerships on June 6 as he sought a trailer. It led him to Farnsworth, about two hours from his home. He bought a 2019 travel trailer that he plans to use when road-tripping with his wife and family. But he couldn’t tow it home last week. It’s on back-order.

Heitsenrether said he’d planned on exploring a trailer purchase before the pandemic but added that the virus played a role in his decision.

“You can go out and camp. You’re away from people and you can keep as much distance as you want,” Heitsenrether said, adding that he’s lost interest in air travel for at least the short-term.

Lisa Barger, of Northumberland, found herself selling a motor home on the used market. She expected interest in the vehicle, even if hers was a 1976 model. What she didn’t expect was just how much interest prospective buyers would show.

“I put it on (Facebook) Marketplace and it sold in about 90 minutes,” Barger said, adding that she sold it for her asking price.

The buyer drove from Shamokin and arrived cash in hand, Barger said, as another prospective buyer watched from their vehicle hoping to get a look at the vehicle.

“It’s camping season. Everybody’s cooped up because of the coronavirus and wants to get out. I didn’t think it would take (just) 90 minutes,” Barger said.