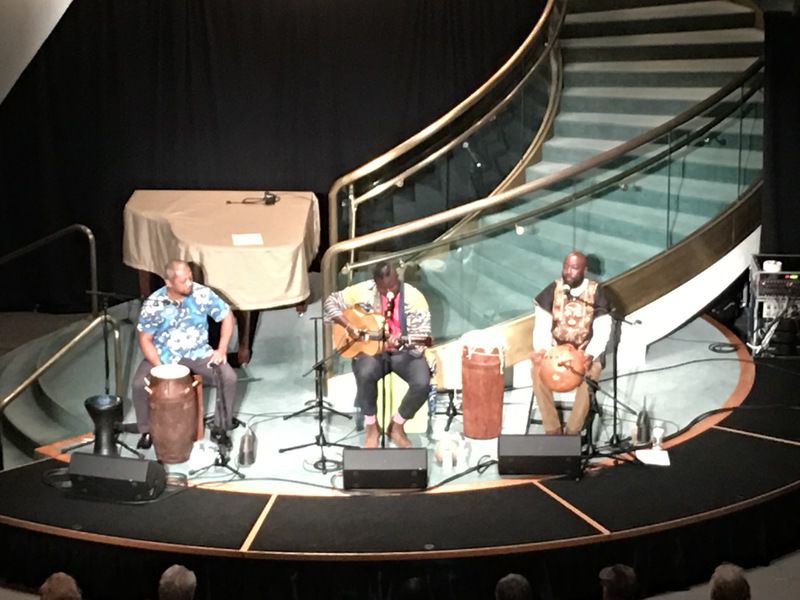 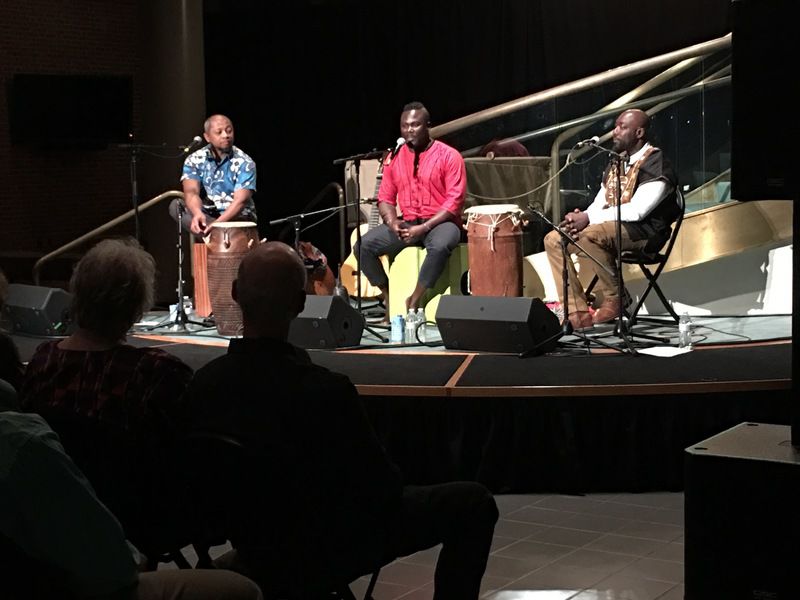 LEWISBURG — Judith Flock of Danville, was having dinner with her husband at the Siam Restaurant in Lewisburg when they overheard the men at the next table talking.

They were musicians from Africa. That piqued her interest.

They learned the musicians, West African singer, guitarist, percussionist and dancer Okaidja Afroso and percussionists and singers Boinor Titus Nartey and Manavihare Fiaindratovo, who now live in Portland, Oregon, were giving a free performance Thursday evening on the campus of the Flocks' alma mater, Bucknell University.

"Fantastic," was Judith's assessment of the performance, held in the Weis Center for the Performing Arts Atrium.

Afroso, of Ghana, and born into a family of musicians and storytellers, has recorded four albums. As he performed, he taught the audience of nearly 300 people some Ghanaian words and told stories of his homeland.

He came to her attention through his involvement in the Western Arts Alliance program.

"He's going to be recording an album that captures a lot of their traditional fishing songs," Maguet said. "He's concerned this tradition is on the verge of being lost. He wants to preserve these songs."

Afroso told the audience, "My language is fading quite a bit. I'm teaching some words along the way."

He said later there are some towns in his country where there are no local newspapers. But someone will write a song about someone who did something and give the song to a fisherman to sing.

So if someone does something bad, Afroso joked, "They will sing about it, so you'd have to move to another town."

The performance left an impression on Sarah and Brock Plotts, of the Lock Haven area.

"It was really nice," said Sarah, 29, a Bloomsburg University student who attended the performance for her multicultural education class.

"It was very interesting," said Brock, 28. "I haven't ever seen anything like it."

He said he couldn't understand the words that Afroso sang in his native language, but, "I could tell when it was an upbeat song."

Afroso, reminding the audience that this is Black History Month, said he told the Bucknell students, "Tap into where black people come from."

He said that will tell them much about who black people are, their culture and how they survived.