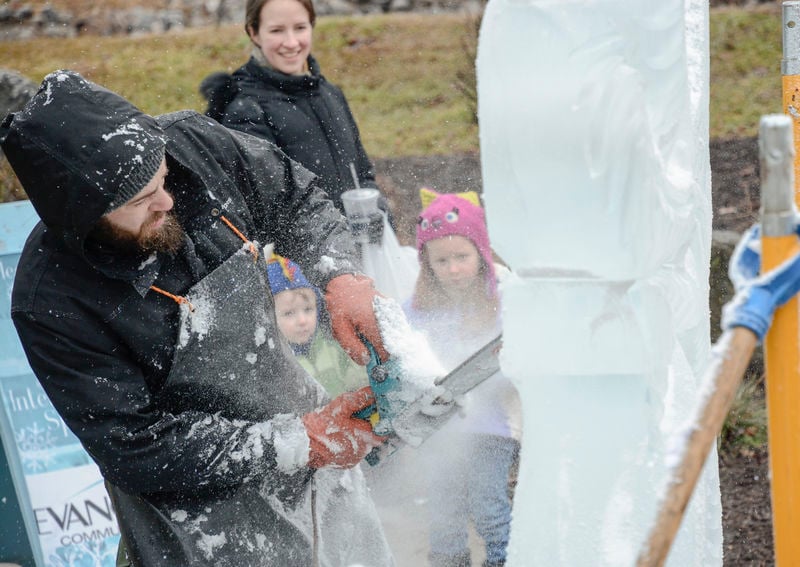 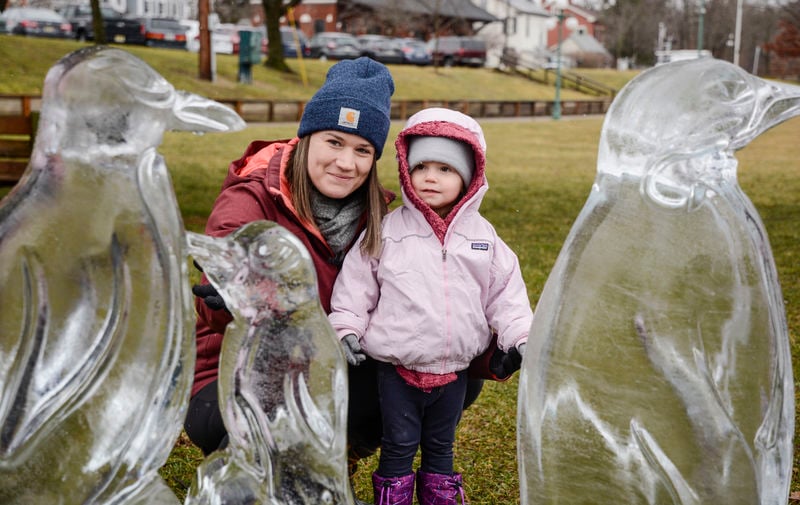 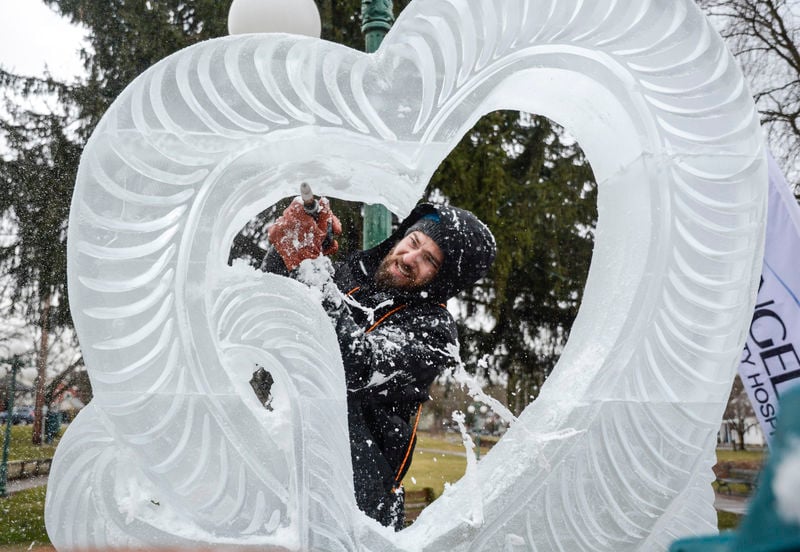 LEWISBURG — Using a chainsaw, a grinder and a propane torch, Jared McAlister, of DiMartino Ice Company in Jeannette, turned a 2,700-pound block of ice into a piece of art this afternoon.

The ice sculpture was one of 36 that will be on display through Saturday in the downtown and Hufnagle Park for The Heart of Lewisburg Ice Festival.

Visitors marveled at some already completed creations and watched McAlister wield his chainsaw, with a modified chain, to create an interlocking set of hearts.

"It's a new design that we came up with a couple months ago," McAlister said. "I saw a picture of something similar to it and thought it would make a really good ice carving."

McAlister said the challenge for this particular piece was its height, which would be 110 inches — more than nine feet. The piece was expected to weigh approximately 1,800 pounds when completed.

"It's a pretty tall piece. I know we've done stuff this tall before here," he said. "But it is a bigger, a little bit more impressive, with some good negative space for taking photos and things."

McAlister said it would take an hour and a half to two hours to carve — time was also taken getting the initial ice block built.

Connor Clayton, age 5, liked a penguin sculpture that was already completed. Looking at the massive unsculpted block of ice, he thought it would be turned into a building.

Connor was there with his sister, Kaylin, age 2, and their parents, Cody and Kristy.

As McAlister began to carve, large chunks of ice were cut away and crashed to the ground.

"We've been to (the festival) a couple of times, but at his age, I think it would be cool for him to watch them carve it," Kristy Clayton said. "We'll probably come by tomorrow once they have everything set up."

"We're always trying to grow the event a little bit," said Lynne Ragusea, Lewisburg Downtown Partnership executive assistant. "This year we have the River Valley Nature School games from 10 a.m. to 1 p.m. in the park."

This is Ragusea's first year working with the partnership. She said the organization started planning the festival, which is sponsored by Evangelical Community Hospital, around Christmas.

"It's nice to see everything coming together and it's nice to see the rain stopped and little flurries coming," Ragusea said. "I love seeing everyone out here looking at it."

A steady trickle of people came through the park to watch the sculptor work, including Brigit Dugan and her two kids, Emilia, 5, and Sam, 2, who were watching from a restaurant across the street.

Julia Macedonio, a Bucknell senior from New York, was there with her mother who was visiting for the weekend.

Macedonio has seen the sculptures before in her time at Bucknell — she works at a downtown business — but never witnessed their creation.

"It's really cool," she said. "I've never actually seen it. We Facetimed my grandpa because he loves doing work like that. He taught me how to use a chainsaw over Thanksgiving, so we wanted to show him.

"I'm surprised how quick it is."

One of McAlister's ice creations is a wishing well, sponsored by Weis Markets. All change exchanged for wishes during the festival will be donated to the Central Pennsylvania Food Bank, according to Ellen Ruby, LDP executive director.

Gilson Snow is holding a patio party from 6 to 10 tonight at the Brasserie Louis. The Stay Rad Lewisburg Apres Ski Party featured samplings of Holla Vodka and a prize for the "funniest Apres ski outfit." The winner was set to receive a one-of-a-kind Stay Rad snowboard from Gilson.

Saturday's schedule of events also includes a Polar Bear Plunge into the Susquehanna River, a Hidden Lewisburg Walking Tour, a chocolate tour and a Frosty 5K race, among others. The Polar Bear Plunge will be at 2 p.m. at the Lewisburg Landing at Front and St. George streets.

I am the editor of The Danville News.