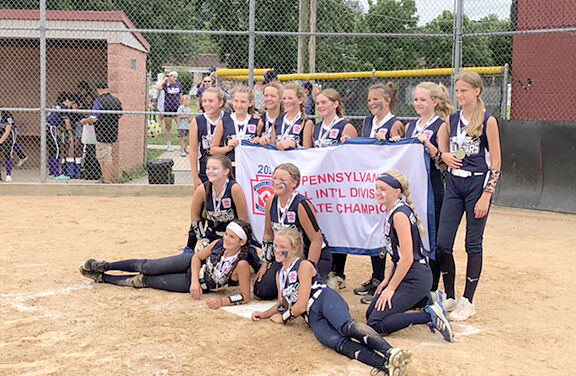 Members of the Mifflinburg Major Division All-Star softball team pose at home plate of the Caln Little League field with the state championship banner Sunday in Thorndale. Mifflinburg won and advanced to the East Region Tournament. 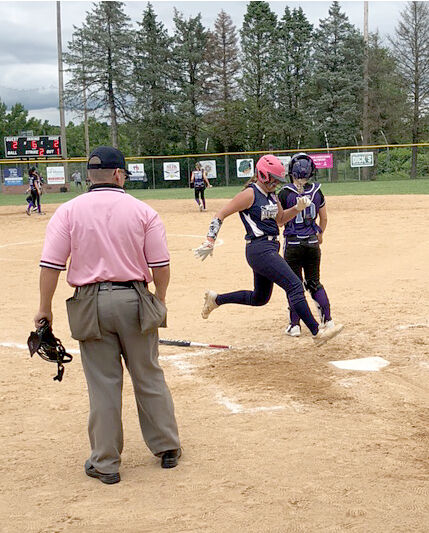 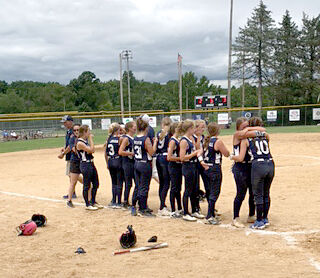 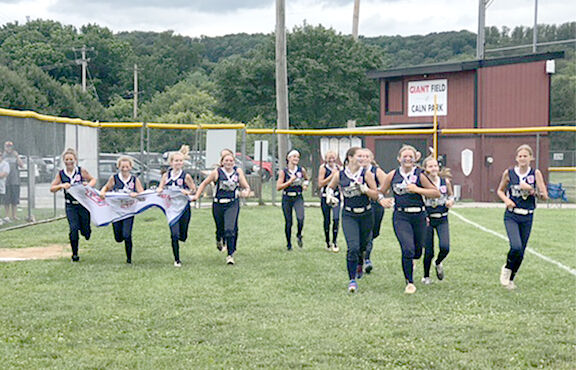 Members of the Mifflinburg Major Division All-Star softball team run on the Caln Little League field with the banner after winning the state championship Sunday in Thorndale.

Members of the Mifflinburg Major Division All-Star softball team pose at home plate of the Caln Little League field with the state championship banner Sunday in Thorndale. Mifflinburg won and advanced to the East Region Tournament.

Members of the Mifflinburg Major Division All-Star softball team run on the Caln Little League field with the banner after winning the state championship Sunday in Thorndale.

THORNDALE — Taylor Stewart had already done the hard work, ripping a softball past the outfielders and racing to third base in the last inning of a tied championship game.

The easy part was bounding home with the winning run on Maggie Rubendall’s single and setting off a celebration that was felt 125 miles away from the Caln Little League Field.

Mifflinburg’s Major Division All-Stars, in a whirlwind, back-and-forth game, walked it off in the bottom of the sixth inning to win the state title 3-2 over St. Marys.

“It was very nervous,” said Stewart, “but I knew as a team we could do it and that we weren’t going to give up.”

Mifflinburg advanced to the 10-team East Regional in Bristol, Connecticut. That tournament begins Saturday with Mifflinburg facing Warwick North (Rhode Island) at 8 p.m. in the last of the day’s four games. The game is scheduled to air on ESPN+.

St. Marys, the Section 1 champion, would have had to defeat unbeaten Mifflinburg twice Sunday to advance. The District 10 rep went down fighting, though, taking a 1-0 in the first inning.

After St. Marys shortstop Molly Hanslovan reached base on a swinging bunt, pitcher Avery Eckels hit a fly ball to right field that was misplayed, allowing Hanslovan to score.

Mifflinburg’s bats didn’t stay quiet for long. In the bottom of the second, after back-to-back walks and a passed ball that allowed the runners to advance to second and third, Olivia Fetterman hit an RBI grounder to second base, scoring Lainey Miller.

The momentum continued in Mifflinburg’s favor in the bottom of the third. Taylor Stewart hit a two-out single to right field, and scored when catcher Chloe Showalter followed suit. As Stewart reached third base, the relay throw got away from St. Marys third baseman, allowing Stewart to trot home for the lead.

“I don’t have a lot of confidence in myself,” Stewart said, “but when I talked to all my friends, and they’re like ‘You got this,’ it really boosts my confidence.”

When Mifflinburg went down without much issue in the bottom of the fifth, it seemed as though the game could be destined for extra innings.

However, after Stewart worked out of trouble in the top half of the sixth, she led off the bottom half with a laser to center field. That hit forced St. Marys to intentionally walk the next two Mifflinburg batters to load the bases, setting up a force out at every base bringing Rubendall to the plate.

In the biggest at-bat of her postseason, and with the infield slightly shifted in, Rubendall drilled a line drive into right-center field, allowing Stewart to score the game-winning run.

“It felt like a great rush,” said Rubendall. “I felt it hit the sweet spot, and I knew it was going.”

Mifflinburg’s shortstop Anna Pachucki, who was a vacuum in the field throughout and had two base hits Sunday, said, “It feels very good — very good.”

Showalter added, “I was really excited for Taylor since her and I are literally best friends. I was so excited to the point where I started crying, and I’m so glad that we won.”

Heath Stewart said he knew a challenge was in store but had the utmost confidence his girls would pull through.

Coach Stewart detailed plans for a celebratory firetruck ride at home later Sunday evening, and told the girls they would have a well-deserved day off today.