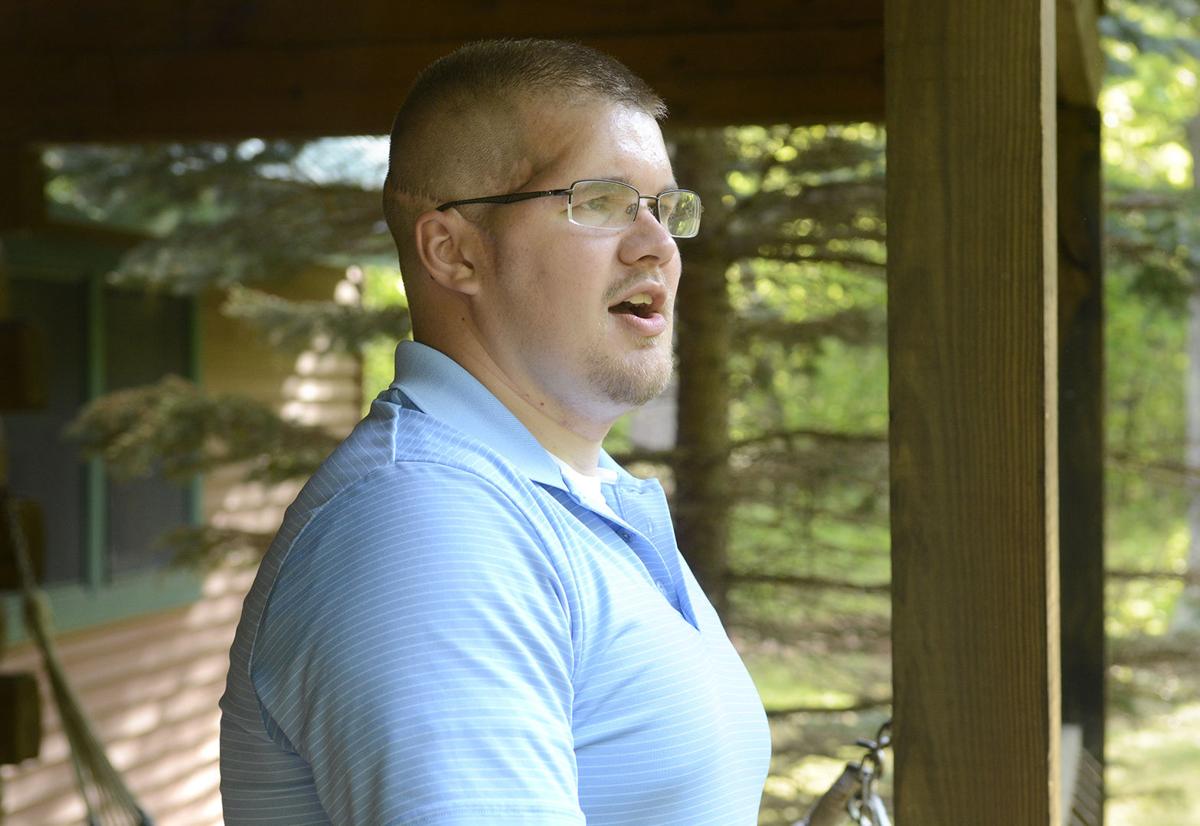 Taylor Bingaman stands on his front porch and talks about his passion for hunting despite an accident 2 years ago. 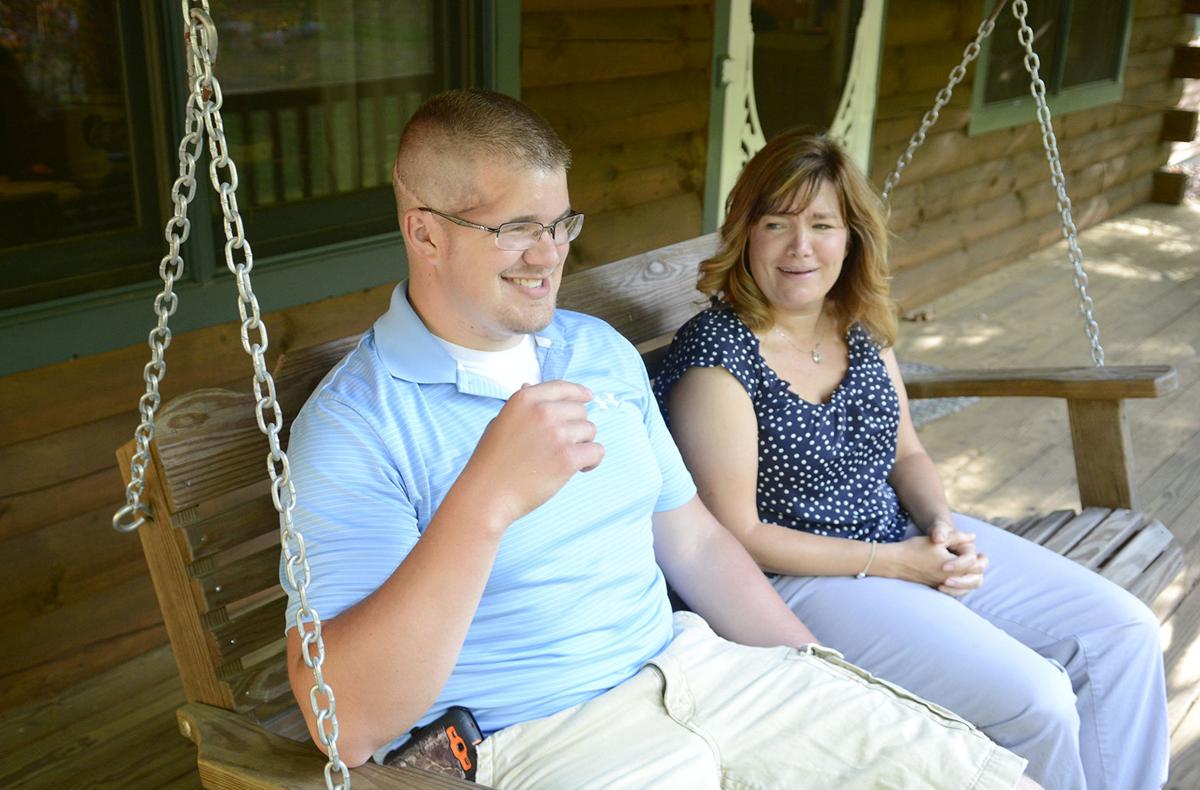 Taylor Bingaman shares a few laughs with his mother Nicole on their front porch in Mifflinburg.

Taylor Bingaman stands on his front porch and talks about his passion for hunting despite an accident 2 years ago.

Taylor Bingaman shares a few laughs with his mother Nicole on their front porch in Mifflinburg.

MIFFLINBURG — Taylor Bingaman is 24 years old, fit and muscular and able bodied. He said he feels "pretty good," but "I want back what I was."

What he was a talented HVAC technician who specialized in copper and pipe work and was paid very well for it. An avid hunter and outdoorsman who liked spending time with his friends. A good son to Nicole and Keith Bingaman.

It all changed Thanksgiving eve 2012 when Taylor fell down a flight of 13 steps at his parents’ Mifflinburg home. Taylor suffered severe damage to his frontal lobe and both sides of his brain, which swelled in his skull.

Taylor was pacing. He’s a handsome bundle of energy and tired at the same time. He talks about his doctors and what he does with his time now. His head bears the scars of his fall and of his many surgeries.

But in all this is Team Taylor, led by Nicole, 44, the petite mother of three adult boys including Avery, 22, and Tanner, 19. She looks almost half as tall as six-foot Taylor. Her strong will is apparent, and she’s able to talk him down. "Go ahead and sit with dad a while," she says calmly and firmly. He does.

Nicole misses what Taylor was, too. "The brain injury is hard on his self esteem," she said. "He can be negative about himself."

But Nicole has hope, because she’s come this far, three years after this family- and life-altering event. She tells the story in a book, "Falling Away from You" from Convurgent Publishing, and will do local events soon to discuss it.

In her book, some 450 pages, Nicole recounts everything from the fall to the gnawing uncertainty of Taylor’s fate to life as it is now, both for Taylor and his family.

"Writing was more of a challenge than I believed it would be," Nicole said. "Truthfully, I didn’t know it would be an exercise of therapy for me."

The book is as frank as it could be, she said, a lot of events and emotions still too raw to put out there. "It was exhausting," she said, but a good editor and publisher helped her through the yearlong writing process.

The book begins with Taylor’s fall and time at Geisinger Medical Center in Danville, where he was taken via LifeFlight medical helicopter. Nicole said the family was spoon-fed information on Taylor so that they could understand the extent of what happened. If Taylor survived, he might not wake, walk, or talk.

"The picture painted was pretty bleak," she said. "A few weeks into it, I realized it would change our lives forever."

She described Taylor’s emergence from coma as "fascinating. When it’s your son, it’s heartbreaking and scary, but there were moments of beauty there," she said.

Triumphs came in doses: Taylor’s first time speaking — he said "thanks" to his parents in a raw voice — standing up, walking again. He had to learn to eat, dress, take care of himself again.

"Even with his legs helped along by therapists, it was amazing," she said. "Each thing was amazing."

It’s also been terrifying. "This is the most non-Hallmark thing you can imagine," she said. "It’s scary: the trips to Philadelphia (Taylor sees doctors there), to the ER.

"It brought the family together, but also it takes over everything," Nicole said. "It changes every dynamic you ever had and puts you in an extremely vulnerable place."

That place is living with your loved one who’s forever changed by traumatic brain injury. What people don’t know about it, she said, is "at the end of the day, you go home and everything changes. They lose who they were. You’re grieving. They’re grieving."

Taylor is impaired cognitively, and every day is a new chapter. There are quirks in his personality, she said. Traumatic brain injury "is a lonely place to walk."

"I miss my old life," Taylor said, the independence. "I can’t see friends alone, I can’t drive, I can’t be alone."

Taylor may not be what he was, but what he is appears to be doing well. He watches his diet. He likes to exercise and does crunches and pushups every day. He works out at the Bucknell University gym and is proud of very strong triceps muscles.

Taylor visits with Mike Hobbins, his former football coach from Mifflinburg high school who himself suffered a debilitating hunting accident that left him blind and dependent on others. They buoy each other, Nicole said, and herself as well.

"I couldn’t have gotten through this without the Hobbins family," she said, calling them a touchstone to emotions and reality.

Taylor has a seizure disorder as a result of the accident. It’s under control with a lot of medication, she said, but it’s working.

Taylor makes the most of when he gets out. His uncles take him on construction jobs once or twice a week, where Taylor puts up trim and drywall. He proudly showed a photo of recent siding work he did.

Taylor also takes classes at the Barn Owl Art Studio in Lewisburg, and that helps him express himself and use his stunning art talent. Among graphic landscapes and paintings of his dog, there is a treasured ceramic plate he made for Nicole for Mother’s Day.

On it is painted a simple message with a heart: "Love wins."