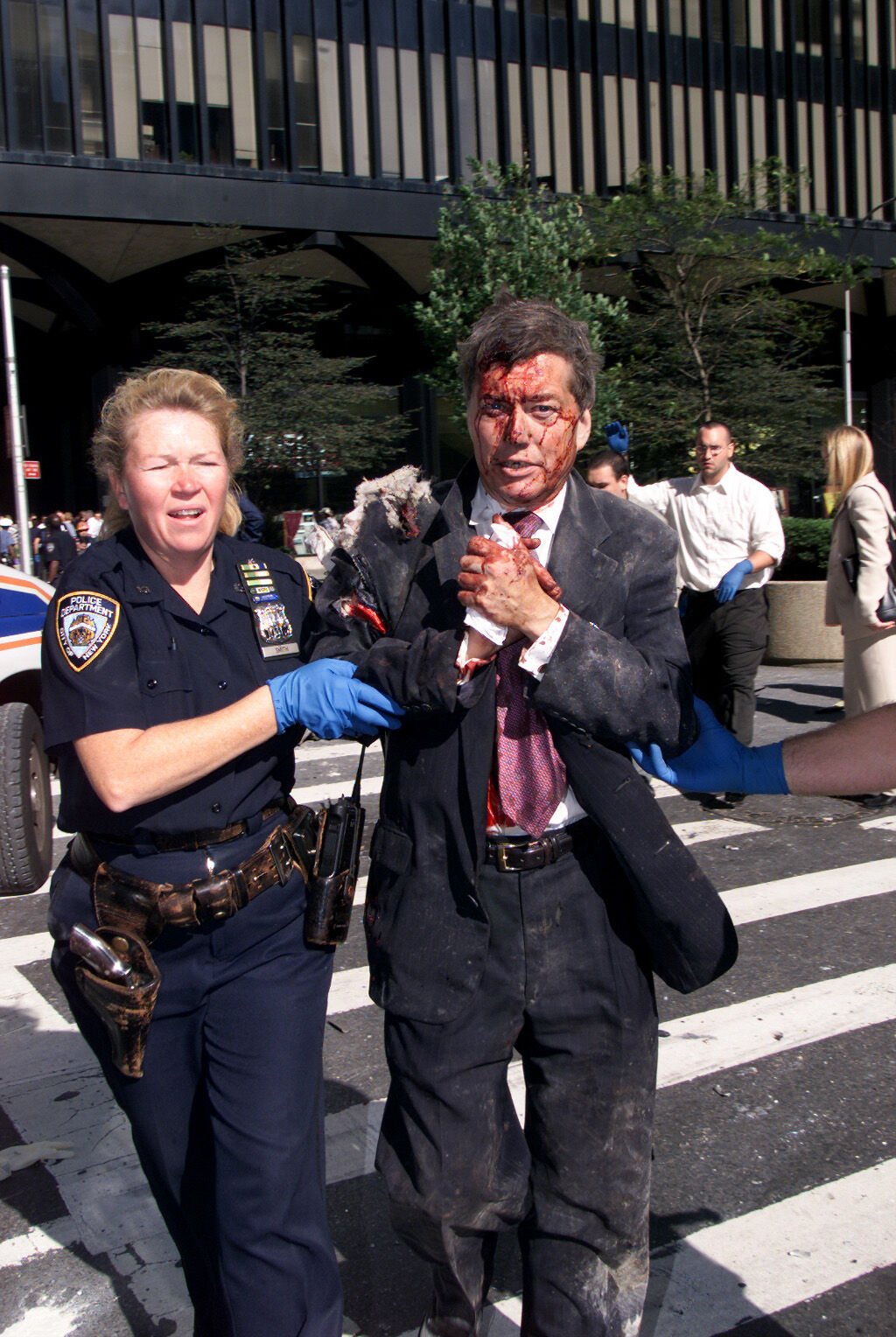 Police Officer Moira Smith, cousin of Trevor Finn, leads injured Edward Nicholls, a broker at Aon Corporation, to safety from the burning World Trade Center in this file photo taken just before the collapse of the first tower on Sept. 11, 2001, in New York. 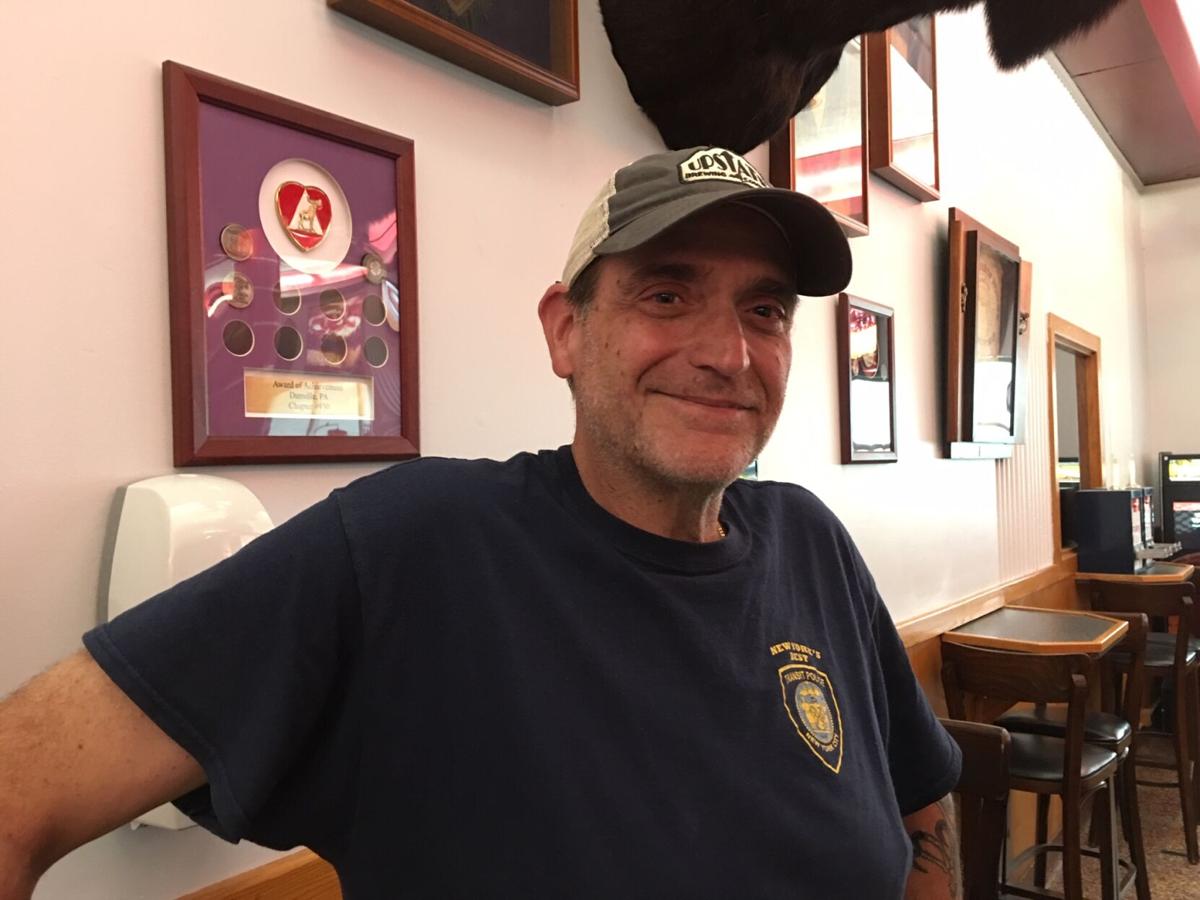 Mario Tulino, a retired NYPD officer, worked with Officer Moira Smith, who died while rescuing people from the World Trade Center on Sept. 11, 2001. 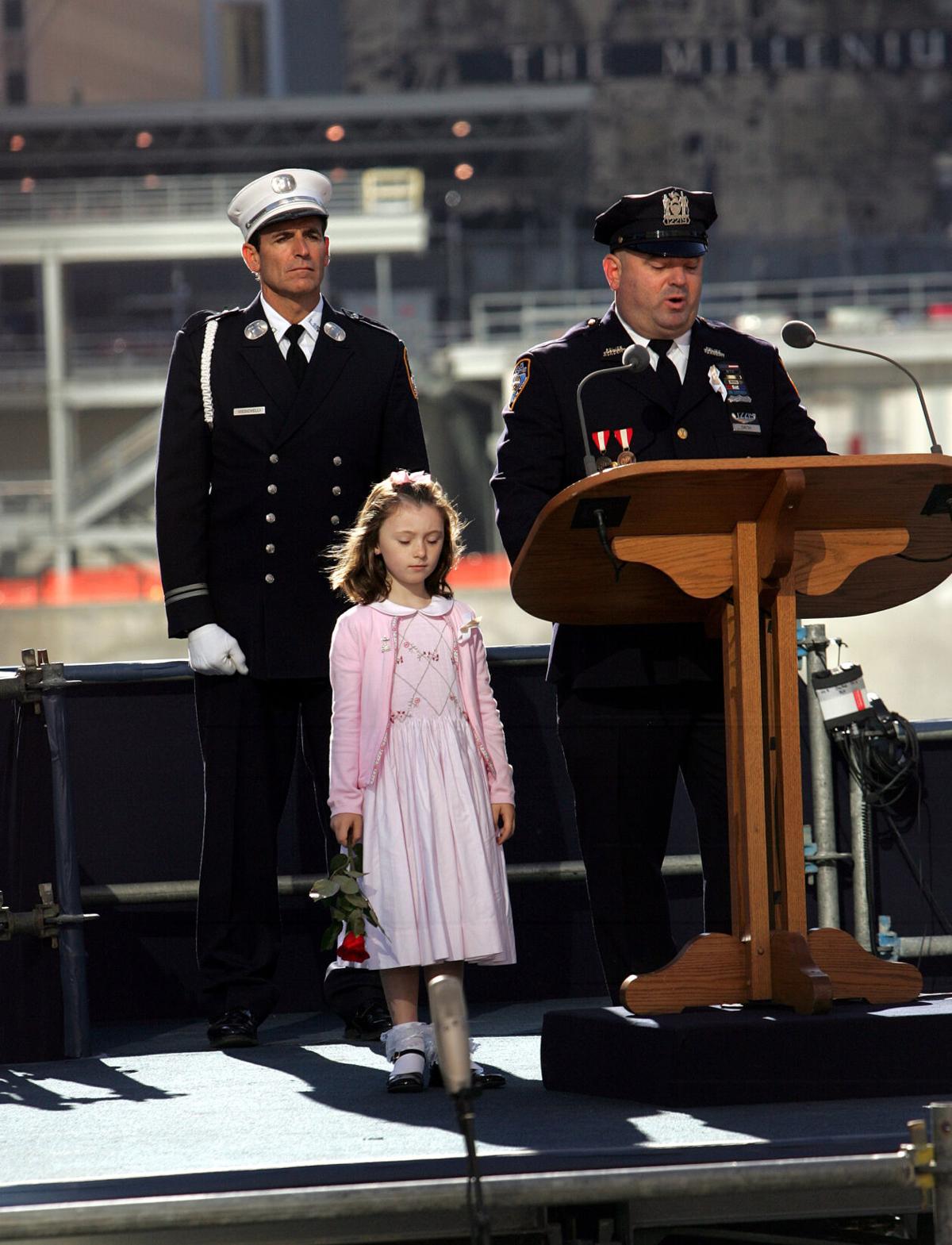 Patricia Smith, 7, holds a rose during 2006 ceremony marking the fifth anniversary of the attacks on the World Trade Center as her father, New York City policeman James Smith, speaks.

Police Officer Moira Smith, cousin of Trevor Finn, leads injured Edward Nicholls, a broker at Aon Corporation, to safety from the burning World Trade Center in this file photo taken just before the collapse of the first tower on Sept. 11, 2001, in New York.

Mario Tulino, a retired NYPD officer, worked with Officer Moira Smith, who died while rescuing people from the World Trade Center on Sept. 11, 2001.

Patricia Smith, 7, holds a rose during 2006 ceremony marking the fifth anniversary of the attacks on the World Trade Center as her father, New York City policeman James Smith, speaks.

DANVILLE — The thing Trevor Finn most remembers about his cousin Moira Ann Smith is how fully she lived.

He recalled Smith as a very happy, jovial person who seemed to have no fear.

“She was definitely larger than life,” Finn said. “She ran with the bulls in Spain. She was my hero.”

So it was no surprise that Smith, 38, a New York City police officer, kept going back inside the South Tower of the World Trade Center the morning of Sept. 11, 2001, to rescue the people inside.

After helping a bloodied man out of the building, she went back in to bring out others. That’s when that tower collapsed, Finn said.

“She called in the initial attack,” said Finn, 50, a Montour County commissioner. “She went in and evacuated people. She kept going in, which wasn’t new for her.”

Bush said Smith “ran into a subway tunnel to rescue dozens of people trapped in one of the worst subway accidents in New York history,” according to whitehousearchives.com.

Five people died and 200 were injured in that derailment, The New York Times reported.

“On September the 11th, 2001,” Bush continued, “she ran toward danger once again, into the burning towers of the World Trade Center. A broker she helped to safety remembers her steady blue eyes and her even voice. The next day’s papers carried an image of Moira helping an injured man out of the tower, before she rushed back in to save others. and the tower collapsed around her. One of Moira’s colleagues said, ‘She could have saved herself, but nothing would have stopped her saving one more person.’”

Finn noted that Moira’s sister, Mary Elizabeth, who worked in one of the towers, also helped people get out that day.

News accounts state that Smith was miles away from lower Manhattan when the planes hit. She rushed to the scene to gather victims and witnesses and brought them to the 13th Precinct, where she worked, and then returned to ground zero to continue to help.

The New York Police Department, and the city, memorialized Smith. The street in Brooklyn where she grew up is named P.O. Moira Smith Way. A playground in Madsion Square Park in Manhattan is called Police Officer Moira Ann Smith Playground. Madison Square Park Conservancy notes in its park guide that, “The playground stands as a loving tribute to this community hero and mother,” who was the only NYPD policewoman killed in the Sept. 11 attack. Twenty-three NYPD officers in all were killed that day.

A commuter ferry also was named in Smith’s honor.

Retired NYPD Officer Mario Tulino, 51, who moved to Danville about 10 years ago — his wife, the former Lisa Seebold, is a Sunbury native — knew Smith when both were officers in NYC Transit Bureau District 04, before the Transit, Housing and Transportation bureaus merged with NYPD in 1995 to become one department. When that merger occurred, Tulino said, Smith requested a transfer out of Transit, which patrols the subways.

“She wanted to get out there in the world and be helping people,” he said. “She led by example.”

Tulino, who is scheduled to speak at Montour County’s 9/11 remembrance ceremony today at Memorial Park in Danville, said that when he first got on the force in the early 1990s, Smith already had been on the force for two or three years.

“Some people could be harsh to rookies,” he said. “She was one of those who was really nice. As far as I know, she was very dedicated to the job.”

He did not know her Danville connection until he was living in the borough. Someone at the Danville Moose, where he is acting president, asked him if he had known Smith when he was a police officer. He wondered why would that person asked him that until he was told that she was related to the Finns who ran the newsstand just up the street.

Tulino, who was an officer for just over 10 years, said he wasn’t on duty when the planes hit the towers.

“I was not in Manhattan that day,” he said. “I was beginning the process of retirement and was not on duty.”

He found out about the attacks like most other people did.

“I was so numb,” he recalled. “When I saw the towers go down, I was in shock. It was devastating for everybody. It was a major game-changer.”

Tulino said he knew other officers who died that day. He still gets emotional about it, but he said that one positive thing that happened right after 9/11 was that the country came together.

“It’s unfortunate we can’t look at the good things that happened,” he said. “I think we got stronger. Unfortunately, we’re going away from that. We got to get back to that. Hopefully, this anniversary, we can take this day and learn how we deal with it and move forward.”

Moira Ann Reddy was the daughter of John Reddy and Mary Finn Reddy, sister of Jerry Finn, Trevor Finn’s father. Moira was married to Jim Smith, also an NYPD officer. They had a daughter, Patricia Mary, who was almost 2 when her mother died.

“That was the first time I ever tasted buffalo wings. The wings were fried and they put on this concoction (buffalo hot sauce). I thought they were awful,” he said, chuckling at the memory.

He smiled at those memories and how Moira would call his father “Uncle Jer,” in her Brooklyn accent.

“She was a very happy person,” Finn recalled. “She was loved.”

Then that horrific day happened.

“All communication was cut off,” Finn recalled. “We knew she was lost.”

No one could get information.

More than six months passed before they found her.

Smith’s remains, along with her name tag and badge, No. 10467, were found in the early morning of March 20, 2002, according to The Associated Press.

“We kept up hope for a long time,” Finn said. “Then reality kicks in.”

He said her wake was held in Brooklyn. Family members put together picture boards to display there.

“We forgot ours at the hotel,” Finn said. “A police officer took me, lights and sirens on, to the hotel.”

Cardinal Edward Egan of New York said the funeral Mass at St. Patrick’s Cathedral. Finn said the city came to a standstill, as police stopped traffic to allow the funeral procession to pass.

“Ten thousand police officers in full dress uniform, saluting up and down the block, with black mourning bands across their badges.”

The memories of that time still are difficult.

He said it’s still difficult to talk about that day.

“That was a family member taken from us way too young, a daughter, sister, mother, cousin, friend,” he said. “She lived life strongly. She helped people. She’s definitely missed.”