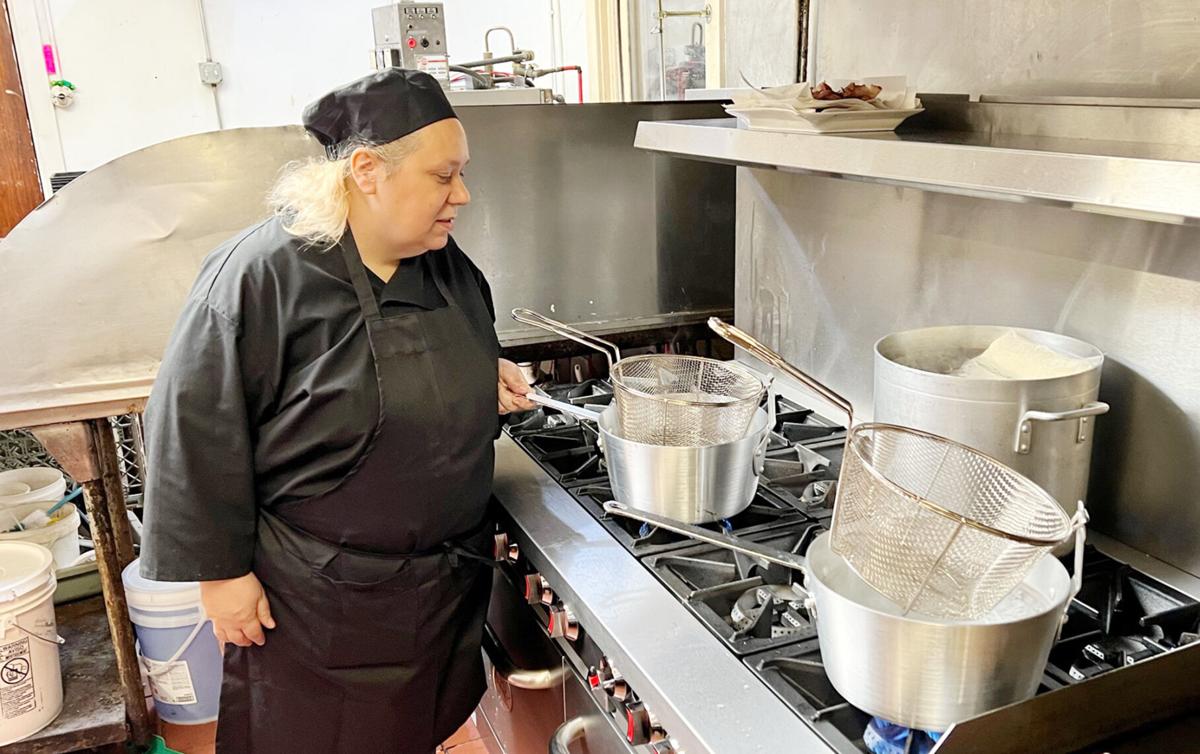 Owner Robin Kepner works in the kitchen at Robin’s Nest Family Restaurant, inside the Edison Hotel, on Market Street, in Sunbury. 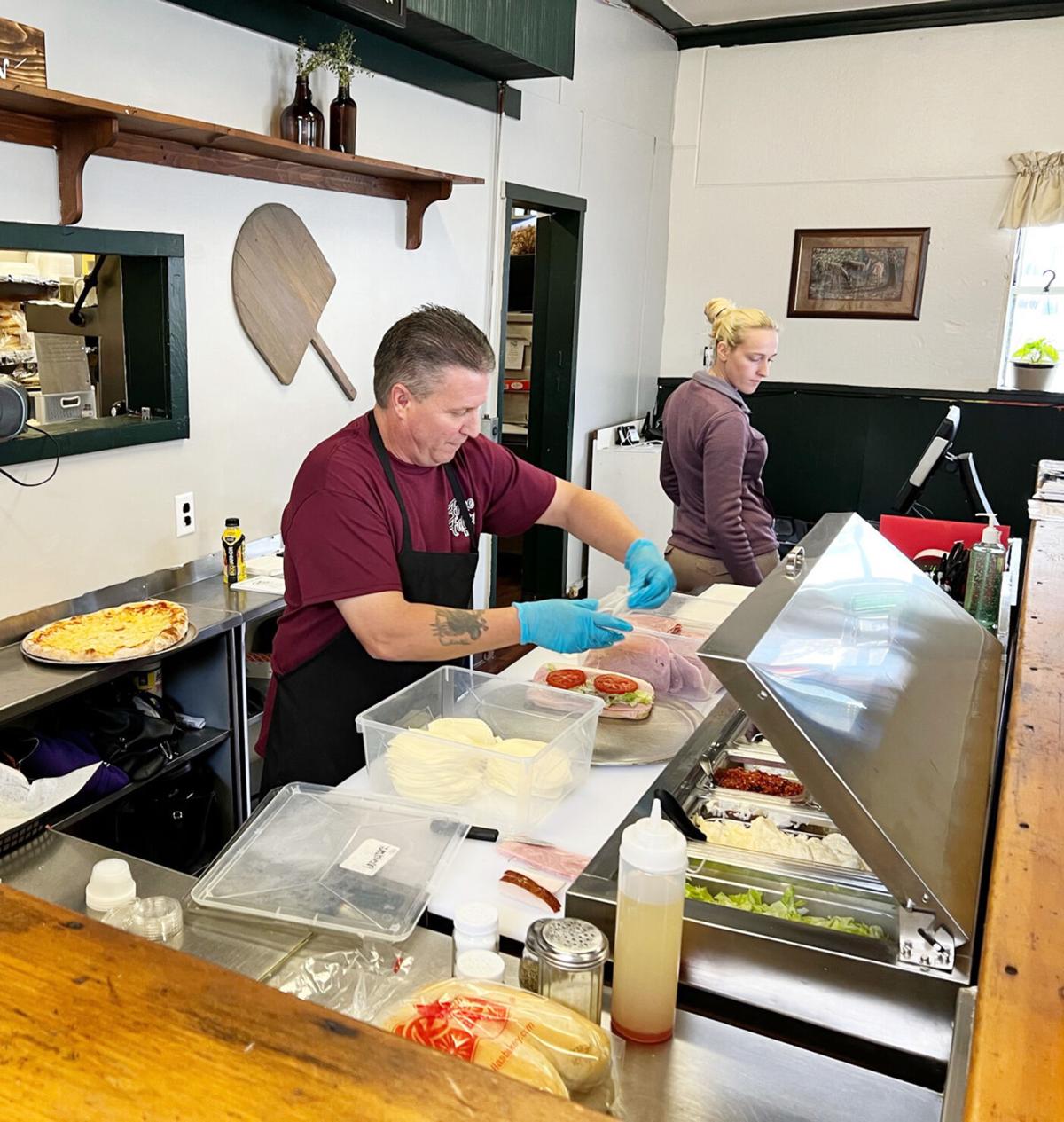 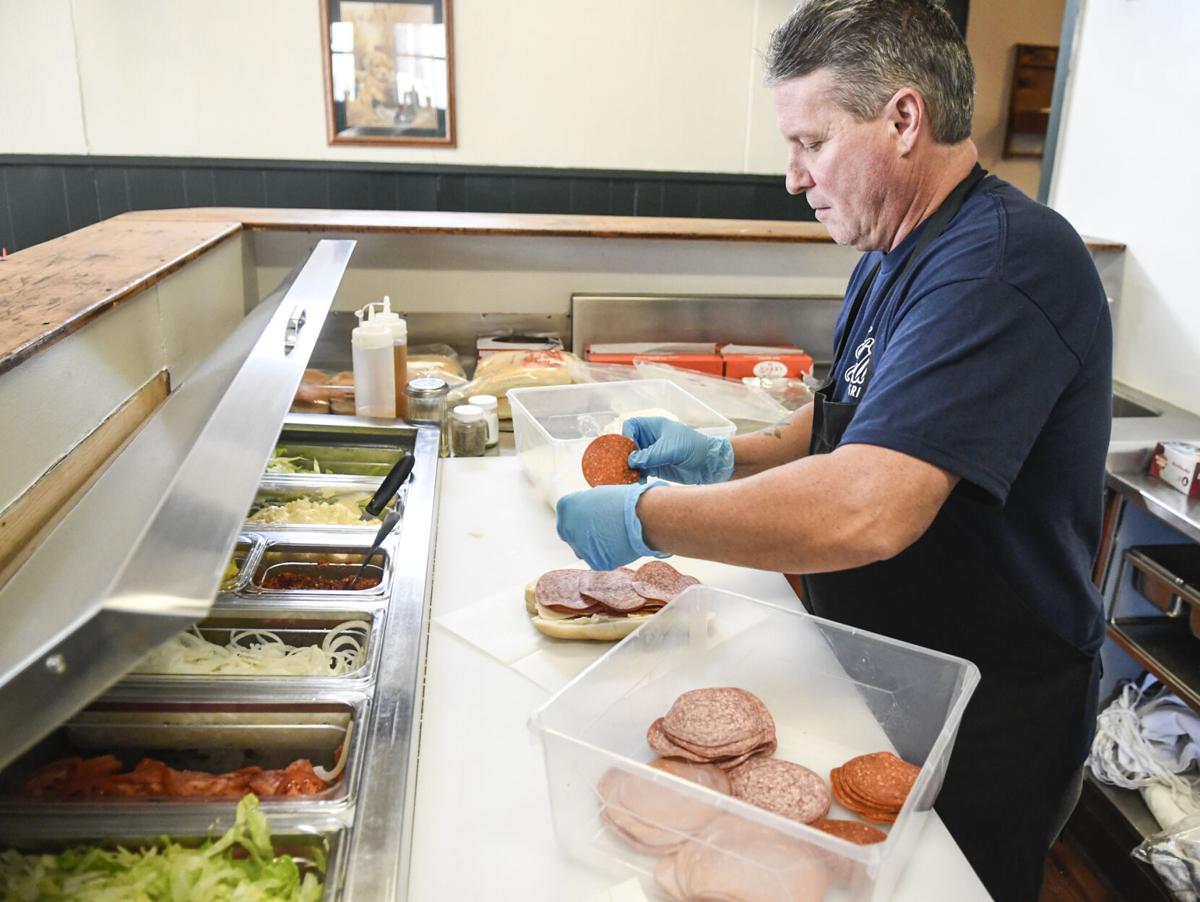 Bob Supsic, owner of the new Free Fallin’ restaurant on Walnut Street in Sunbury, whips up an Italian sub for an order. 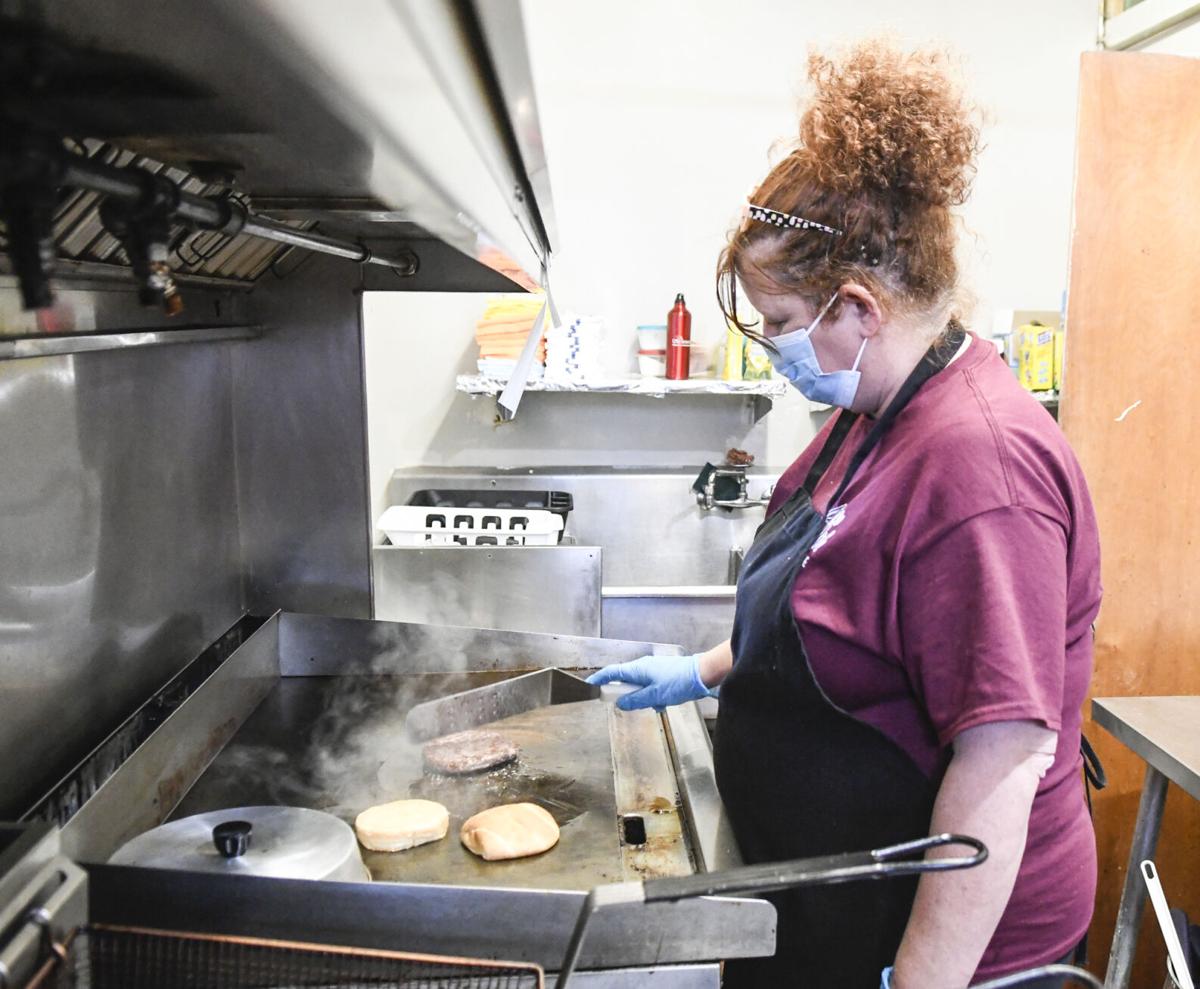 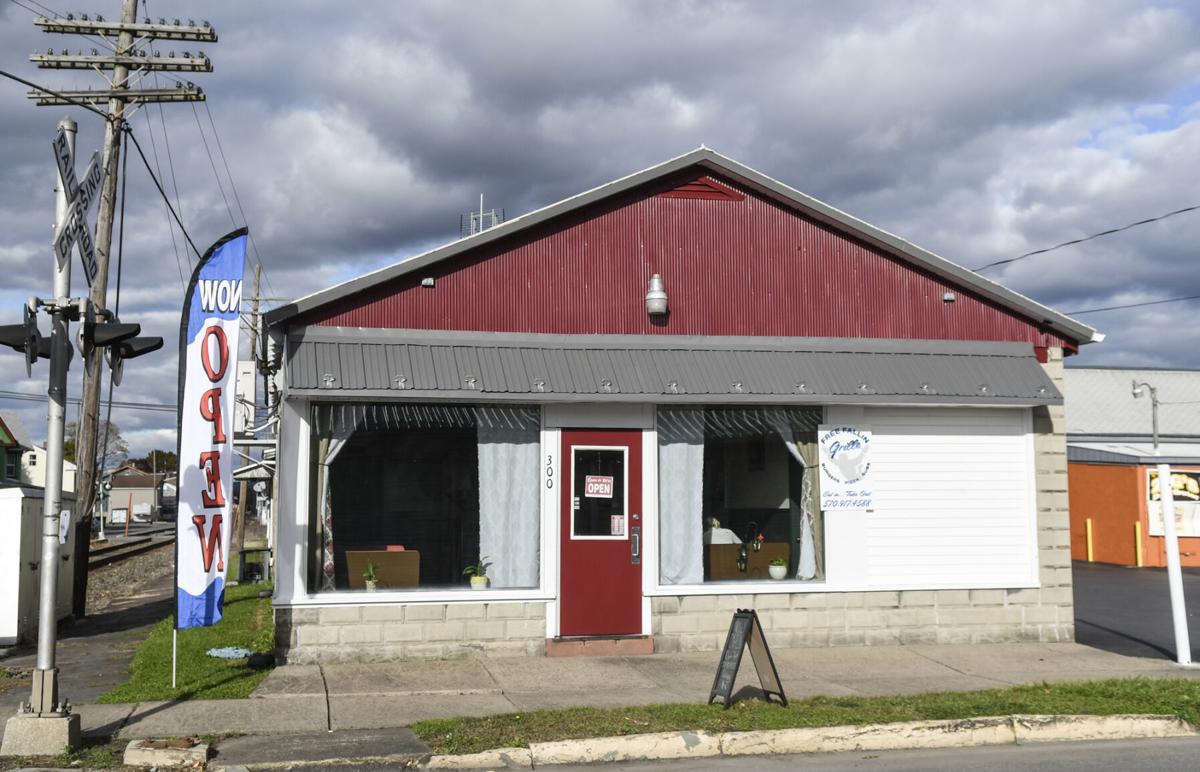 Above: The new Free Fallin restaurant on Walnut Street in Sunbury is now open. Below: La Fiebre Food Truck, on Second and Reagan streets in Sunbury. 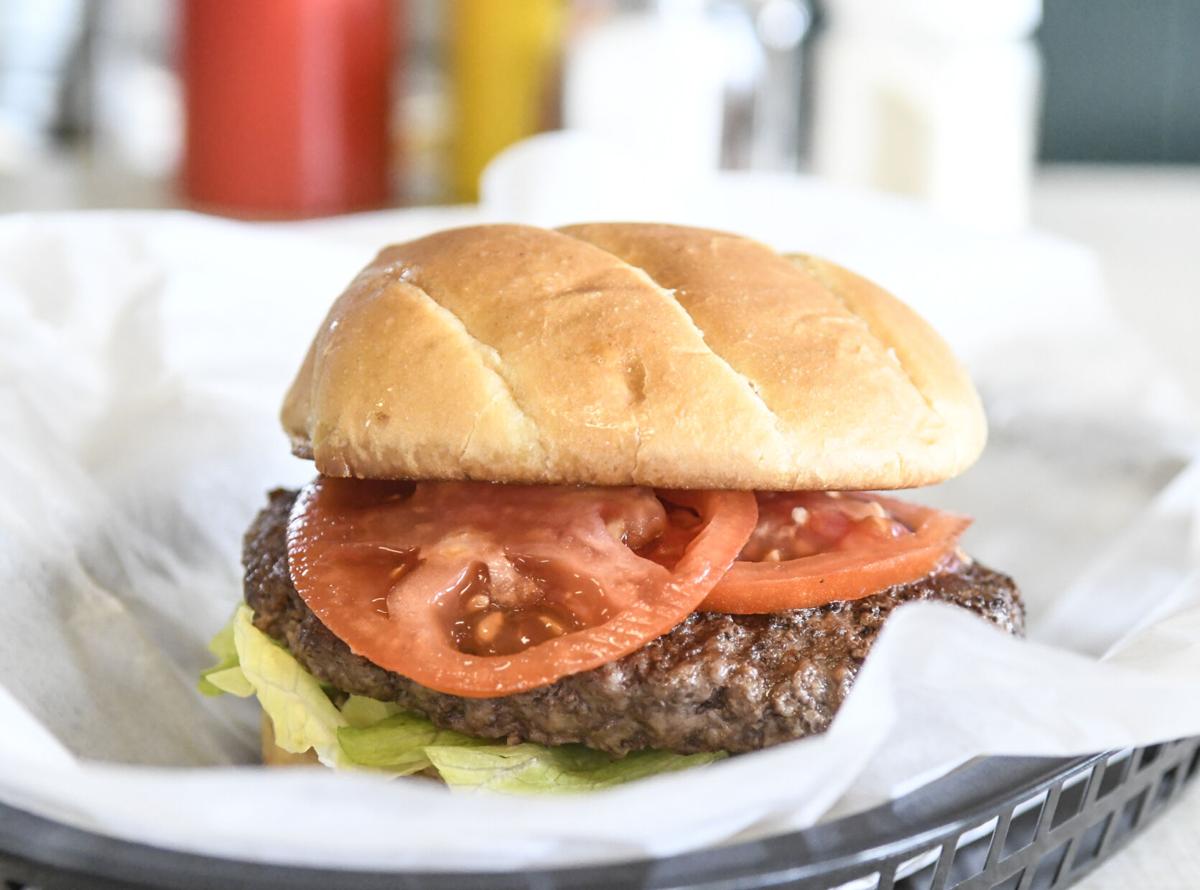 Robert Inglis/The Daily Item A fresh, never frozen hamburger, made at the new Free Fallin restaurant on Walnut Street in Sunbury on Wednesday. 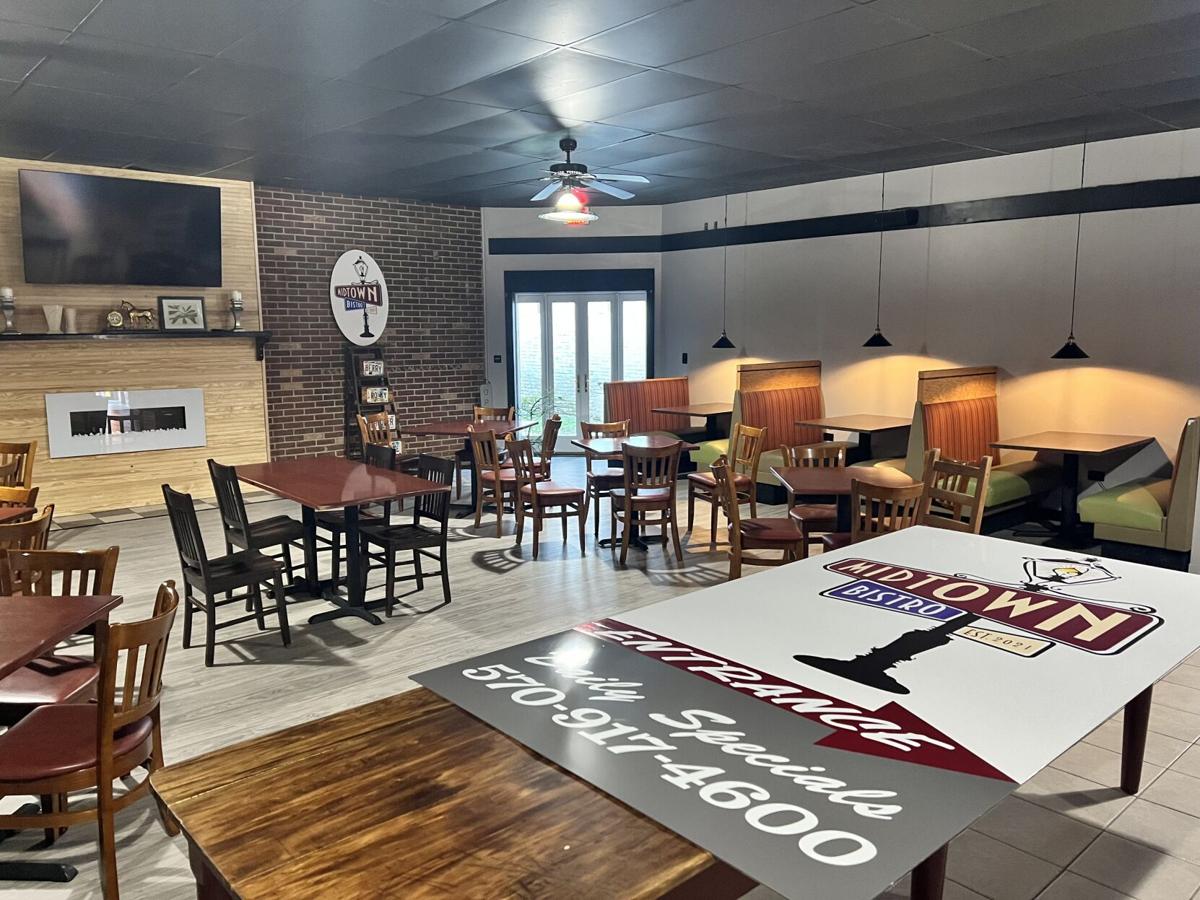 The inside of MidTown Bistro, at the rear of 323 Market Street, in Sunbury, which is slated to open soon. 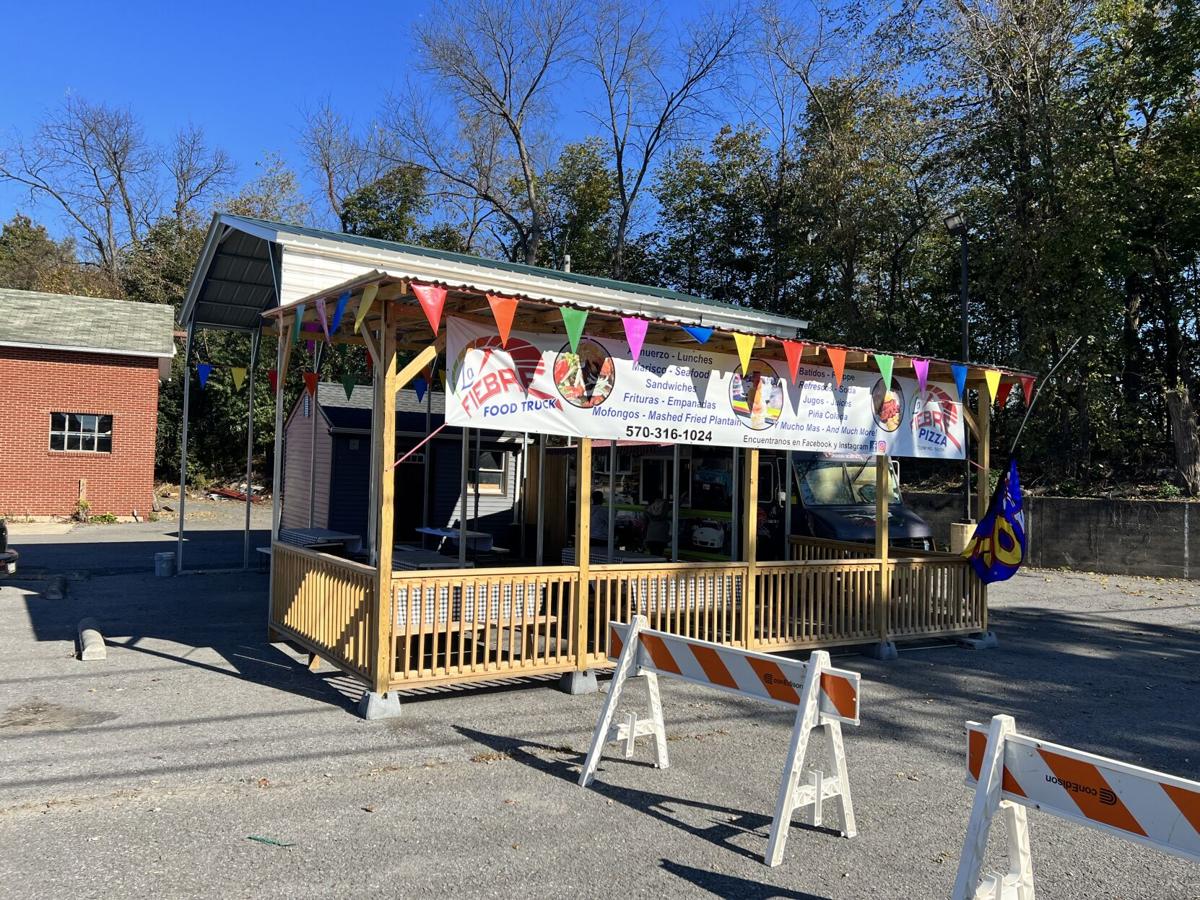 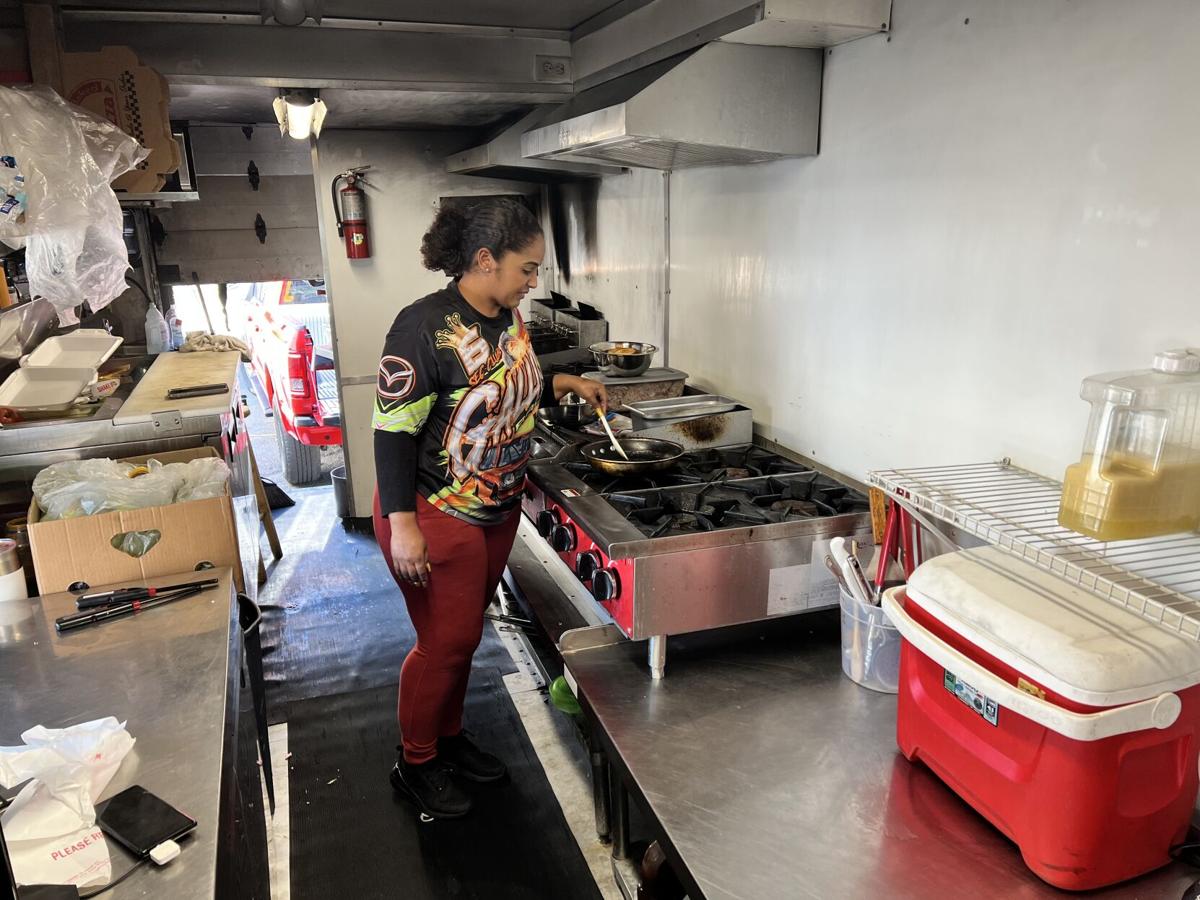 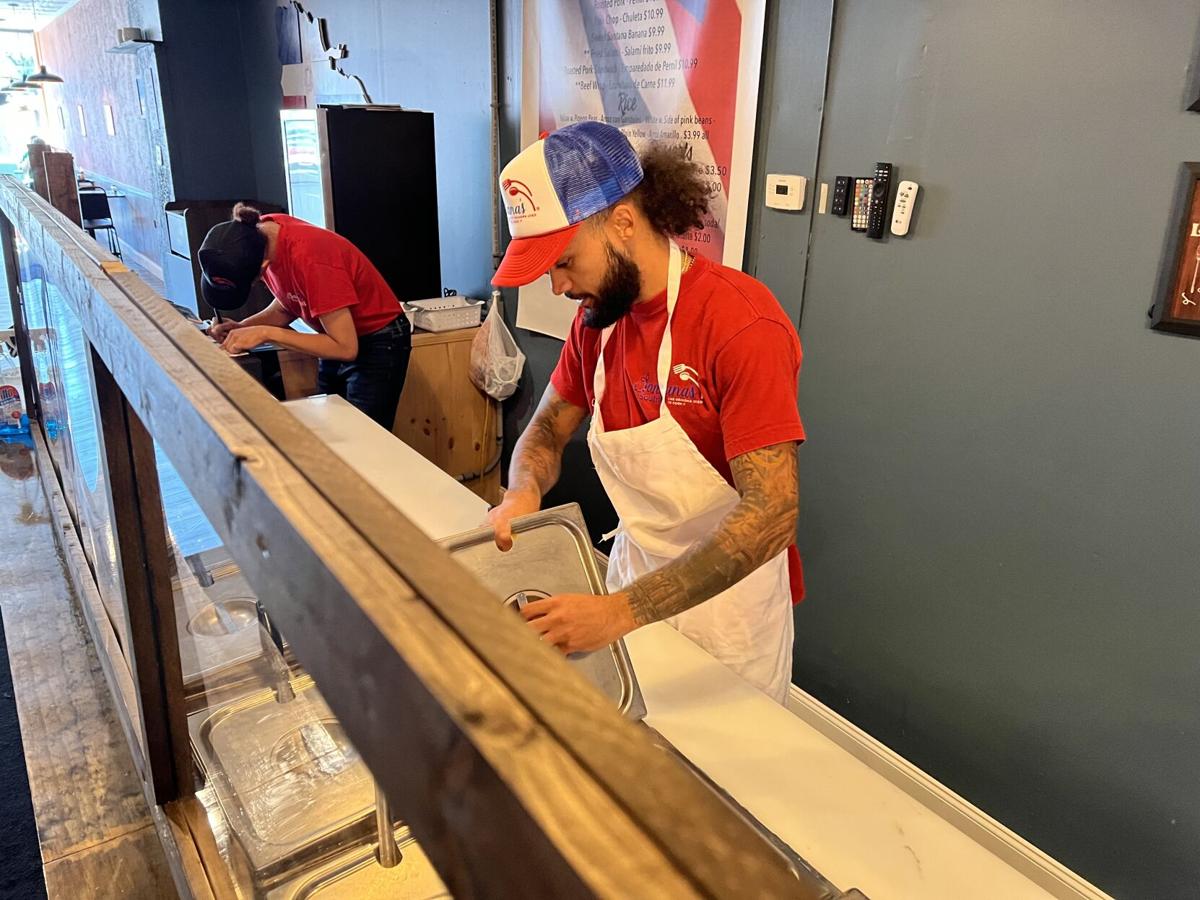 Owner Robin Kepner works in the kitchen at Robin’s Nest Family Restaurant, inside the Edison Hotel, on Market Street, in Sunbury.

Bob Supsic, owner of the new Free Fallin’ restaurant on Walnut Street in Sunbury, whips up an Italian sub for an order.

Above: The new Free Fallin restaurant on Walnut Street in Sunbury is now open. Below: La Fiebre Food Truck, on Second and Reagan streets in Sunbury.

Robert Inglis/The Daily Item A fresh, never frozen hamburger, made at the new Free Fallin restaurant on Walnut Street in Sunbury on Wednesday.

The inside of MidTown Bistro, at the rear of 323 Market Street, in Sunbury, which is slated to open soon.

SUNBURY — Big changes are under way to the menu of Sunbury restaurants.

Six new eateries are in various stages of opening. At least one other is planning to move and expand.

Perhaps most remarkable of all, none of the owners are reporting problems hiring so far, bucking a national trend.

The owners and operators at the new locations also say supply chain issues haven't gotten in their way.

Free Fallin’ Grille, at 300 Walnut St., and Robin’s Nest Family Restaurant, inside the Edison Hotel on Market Street, opened in the last week.

Elders Restaurant 916 Walnut, Sweet Chaos, 901 Market Street, MidTown Bistro 323 Rear Market Street, and La Fiebre food truck, on Second and Reagan are either open are getting ready to open in the coming weeks

“I have had no problems (hiring),” Kepner said. “In fact, I had 40 applications for the 13 positions I had available.” Among those new employees are has two family members who are working for her.

Little Addy’s Cafe owner Tammy Koonsman is preparing to move from 438 Market St. to 314 Market St. at the end of February, barring any unexpected delays. She said she will have a staff of six people.

“As far as employees, last year it was tough but now I am not seeing that,” she said. “I have not had a hard time at all.”

"I have had so much support," she said. "I love doing this and I am happy to be here in Sunbury."

Leon said she will stay open in the winter and even built an outside seating area with a roof for patrons when the weather is nice.

"I am very happy to be doing this," she said.

That experience may be part of a long-awaited national employment rebound.

On Friday, the Labor Department announced the addition of 531,000 jobs, the most since July and unemployment fell from 4.8% to 4.6%. The number of long-term unemployed — people out of work for six months or more — has fallen sharply in recent months, to 2.3 million in October from 4.2 million in April.

In October, the pickup in hiring was spread across nearly every major industry, with only government employers reporting a job loss. Shipping and warehousing companies posted a gain of 54,000 jobs. Retailers added 35,000. The battered leisure and hospitality sector, which includes, restaurants, bars, hotels and entertainment venues, gained 164,000 jobs. Manufacturers, despite their struggles with supply shortages, added 60,000 jobs, the most since June 2020.

The Labor Department also reported the nation remains 4.7 million jobs short of the number it had before the pandemic flattened the economy in March 2020. The effects of the virus are still discouraging some people from traveling, shopping, eating out and attending entertainment venues.

Bobbi Jo Rodriguez, of Milton, and her partner Brandon Walburn, of Turbotville, owners of Sweet Chaos, both said they were glad to be in Sunbury and see the improvements being made through the city, as well as seeing other businesses opening their doors.

“We both wanted to be here and invest here,” Walburn said. “We are happy to be seeing people investing here and we are also thrilled to be seeing so much support for us. We want to ensure the success of businesses within the city because if they succeed, so does Sunbury as a whole.”

Walburn said they also have been working themselves and have not had any issues hiring at the 901 Market St. location.

Mike Berry, MidTown Bistro owner, said he is also excited to be part of downtown Sunbury and to open soon at the rear of 323 Market St.

“We are looking forward to seeing everyone come to see us,” he said. “We are happy to see so many businesses here in the city opening up.”

Koonsman said she's excited for all of the new members of the city restaurant community and for her building to be open and ready for business. They all understand the challenges of opening a restaurant at any time, but particularly as COVID looms and supply chain issues persist.

“It’s nice to see so many places living their dreams,” Koonsman said.

Outside of the Northumberland County Courthouse, within walking distance of many of the new locations, Sherry Mancini, 37, of Middleburg, said when she visits the city she likes to see what is new.

"It's exciting to see a new business open that serves food," she said. "Everyone always wants to make a good impression so I like to go and see what is offered and what it is on the menu."

Sandra Willis, 42, of Selinsgrove, sees similar progress across the region.

"I think the whole Valley is getting back on track and things are opening up all over," she said. "But I will say I do like seeing and hearing about Sunbury getting more options for people who have to visit."

Laurie Johnson, owner of the long-established McGuigan’s Public House on the corner of Market and Third streets said she is also happy to see residents have choices within walking distance.

"This is a great thing," she said. "I am excited for all the new restaurants that are opening and I think these are the types of things we need to revitalize our city. This will bring more people in and there is nothing wrong with that."

Santana's SOULfrito, located at 318 Market Street, is set for its one-year anniversary after opening Nov. 9, 2020. Owner Edwin Santana said he is already adding to his seven employees, adding beer and mixed drinks and starting a delivery service.

Santana said he arrived in Sunbury 15 years ago and missed the food his grandmother made while he was still living in New York.

"I wanted to bring that here to Sunbury," he said. Santana said he will be adding take-out beer and offering mixed drinks inside the establishment in the coming weeks.

"We couldn't be happier," he said. "We have grown so much and I am very appreciative of all the support."

Santana said he also makes it a point to visit each new restaurant that opens.

"I think it's great that we are seeing so many places open up," he said. 'I stop at each place when I can and show them support."

When Kepner was deciding where to locate Robin’s Nest, she said she ended up with a very short list. Kepner is leasing a section of the Edison Hotel for the restaurant, she said.

“I looked all over and this is just the place I wanted to be,” she said. “I am happy that the city is getting so many options with places to go.”

Sunbury on the rise

Central Pennsylvania Chamber of Commerce CEO Tea Jay Aikey said she isn't surprised to see Sunbury not experiencing a hiring problem. She sees it other locations across the Valey.

"Mifflinburg and Milton are also having new businesses pop up and not having any issues with hiring," she said. "I think it's because these individuals are doing all the work themselves and they are not real big service industries, like hotels where they need a lot of staff."

"It's just so exciting to see."

City Administrator Derrick Backer said he thinks Sunbury is growing, which is why so many restaurants might be opting for a location near the downtown.

“Sunbury is extremely fortunate that while other communities see businesses closing, we are seeing a boom of business openings,” he said. “This is a great sign for Sunbury and its future. This shows that entrepreneurs want to start their businesses in Sunbury and hopefully grow their businesses here.”

“There is certainly work to be done to continue this, but we want the message to be ‘Sunbury is open for business and is business-friendly,’ not ‘we hinder progress and development,’” he said.

The new restaurants give Sunbury residents more options than they have had in years, Councilman Jim Eister said.

Eister said in his past 12 years on council, he doesn’t remember ever seeing so many individuals investing in the city.

“I think it is wonderful that we are getting people interested in our city,” he said. “These restaurants are investing in the city and we couldn’t be happier to see this. We all wish each of them the best of luck and we encourage people to go out and try them all.”

The Associated Press contributed to this report.