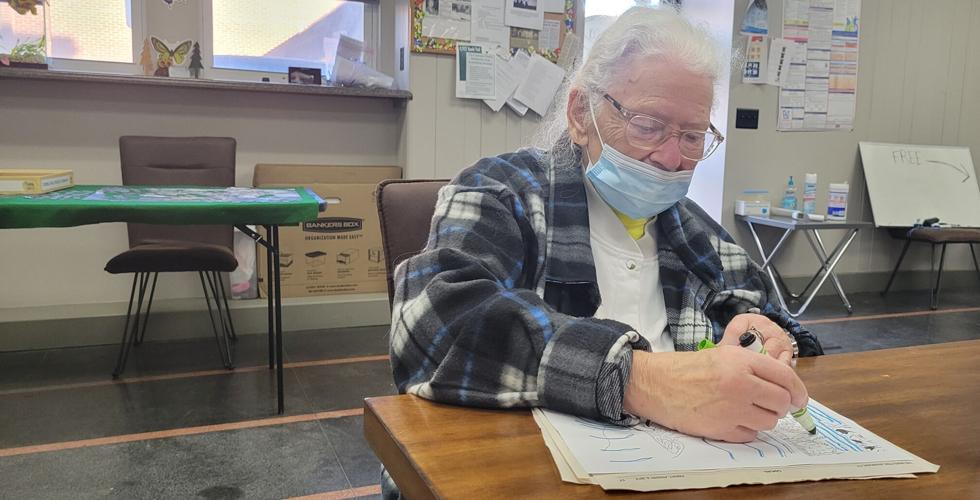 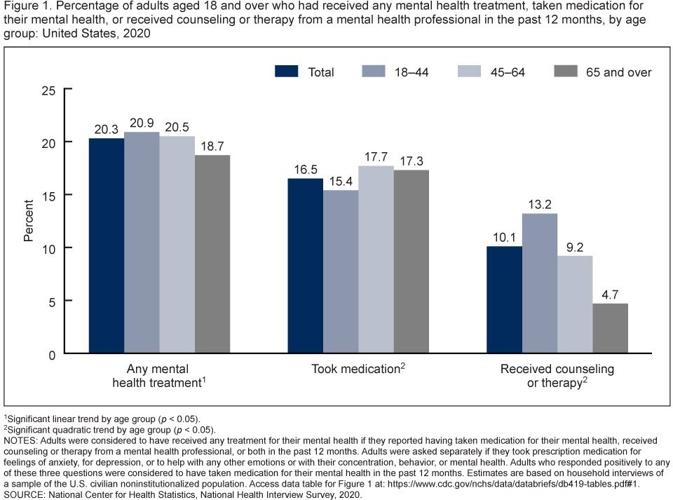 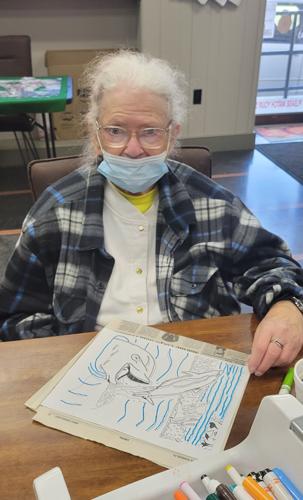 SHAMOKIN — Ruth Snydermull has been attending the Shamokin drop-in center since the Northumberland County Organizational Resources for Community Outreach (NORCO) was established more than 20 years ago.

NORCO’s drop-in centers — one in Shamokin and one in Sunbury — are designed to be a place where those recovering from mental health issues can come have dinner, play games, do activities, and socialize in a non-clinical environment. Snydermull, an 85-year-old resident of Atlas, was 62 when NORCO was founded in 1999.

“I wanted to be active and do things and be out,” said Snydermull at the drop-in center at the rear of 226 E. Independence St. in downtown Shamokin. “It’s relaxing to be there. It occupies me. I can color or do whatever I want. It just helps because it relaxes me. That’s the main thing. I just feel relaxed.”

Older adults experience many barriers when it comes to mental health services from lingering stigmas to technology issues, according to experts in the Valley.

The Centers for Disease Control and Prevention (CDC), in partnership with the National Association of Chronic Disease Directors, estimated that 20 percent of people age 55 years or older experience some type of mental health concern. The most common conditions include anxiety, severe cognitive impairment and mood disorders, such as depression or bipolar disorder.

The percentage of adults who had taken medication for their mental health in the past 12 months was higher among those aged 45–64 at 17.7 percent and 65 and over at 17.3 percent, compared with those aged 18–44 at 15.4 percent, according to the CDC.

‘It helped my mental health’

Snydermull, who lives in a personal care home in Mount Carmel Township, said she made sure to attend virtual drop-in center meetings during the height of the COVID-19 pandemic. She has one adult son who lives nearby in Dornsife.

Snydermull said the social aspect is also a benefit. She said she likes to meet new people.

NORCO Executive Director Jen Andress said the program is intended to be “a place to hang out and feel accepted.” Those attending must be older than 18, but there are no restrictions for income levels or other demographics. No one is charged a fee for attending.

Andress, who has worked 13 years in mental health, said people felt especially isolated during the pandemic.

“Working from home is the new normal,” she said. “I need to get out and see people, I can only imagine having a mental illness and not being out in the world. People need people.”

One of the biggest challenges with older adults is overcoming the stigma of mental health, said Northumberland County Area Agency on Aging Administrator Karen Leonovich.

“They (adults ages 75 and older) grew up in a generation where they didn’t admit easily that they had depression or mental health ailments,” said Leonovich. “They have a tendency to handle it on their own. It was very difficult for them to come right out and say they needed help.”

Brenda Appel, the deputy director of the Columbia-Montour Aging Office Inc., said outreach needs to continue and improve to inform older adults that it is okay to get treatment for mental health just as they would for any physical health issue.

The updated and revised document states that a person who has dementia or a dementia type cannot be excluded from mental health care/services, said Holly Kyle, the executive director of Union-Snyder Agency on Aging Inc.

“This was a huge win for the aging advocates because very often we have been told that if they are over 60 and have a dementia diagnosis that it is aging and not mental health,” said Kyle. “The truth is that dementia causes behaviors that are mental health behaviors and must be treated as such.”

The bulletin states: “Depression, anxiety, addiction, and other mental illnesses are not a normal part of aging and should not be considered as such. As individuals age, the support networks utilized to help manage symptoms of a mental illness may change, resulting in individuals seeking services for the first time in their lives. The development of depressive disorders occurs frequently in older adults making it critical that comprehensive mental health evaluations are conducted based on presenting symptoms regardless of age.”

It also reads, “Older persons diagnosed with a neurocognitive disorder, including dementia, who are experiencing symptoms of a mental illness, including depression, anxiety, substance use disorder, post-traumatic stress syndromes, and behavioral agitation are guaranteed access to mental health services under laws and regulations of the commonwealth.”

The bulletin adds, “Please inform your local provider network of the urgency of addressing the mental health and crisis services needs of older adults and work with them to develop appropriate services and ensure access to those services by senior adults.”

“Therefore,” said Appel, “specialized treatment is widely unavailable and older adults that do seek treatment are seeing a psychiatrist that sees all ages and may not have the additional training to work with older adults, or just managing mental health with their primary care physician.”

The need is most often in the community and those resources either don’t exist for this population or the wait is longer than reasonable, said Kyle.

“Honestly it is a lack of available clinicians,” said Kyle. “We simply do not have enough in our area overall and very few, if any who specialize in older adults.”

The challenges of mental health coupled with physical health issues compound the matter, she said.

“You may have a person who has had a stroke and thereby has issues related to the stroke and add to it behavioral issues as a result of dementia and the caregiving situation becomes twice as hard,” she said.

Isolation with older adults, especially during the COVID-19 pandemic, is also an ongoing issue.

“Older adults become more frail, they don’t leave their home often,” said Leonovich. “They might have ailments and health issues. Their kids move away, their friends start to pass away. They have a tendency to remain at home and not have a lot of people to talk to.”

As a result, they become sad, depressed and hopeless, she said.

“There’s not a lot of positive future in their eyes,” said Leonovich. “That can turn into major depression. It can be treated with medication or counseling, but older adults tend not to admit there’s an issue. It can be a major concern.”

Adult community centers and senior action centers can help address isolation. These centers have activities, meals and social interactions to help with feelings that come from isolation, she said.

Case managers who go into the home for bathing services or food delivery will also check on each client’s mental health. There are also programs for telephone checkups, said Leonovich.

Older adults may not have the technology or know-how for telehealth, said Leonovich.

“Many older adults have the technology such as smart phones and computers now but a large population still do not,” said Appel.

Should tele-psych become more available, there will be many seniors who do not have the devices or the knowledge of how to use the devices for such services, said Kyle.

“The broadband capability in this area further limits access,” said Kyle. “We need services that are able to go to where the need is and when it is needed. We must have either mobile services or access to mobile services in the rural communities.”

Leonovich said she is most concerned with older adults who have no connections with the Aging offices in any capacity. They try to reach as many people with health fairs, advertisements, other outreaches and word of mouth.

Anthony S. Ragusea, a board-certified clinical psychologist for Evangelical Community Hospital, said the research is clear that older adults can benefit from psychotherapy.

“There’s a belief that you can’t teach an old dog new tricks and if you’re old you’re not going to benefit or change,” he said. “It’s true to some degree. The more ingrained a problem is the less likely you’re going to benefit from psychotherapy. If the person is motivated to work on a problem, older folks are just as likely to benefit as anybody else.”

Older citizens tend to be more happier and grateful, to let problems go and are less fearful about the future, he said.

Older citizens tend to have more problems around loss: loss of functioning, loss of independence, and loss of loved ones who are sick and dying. This can lead to loneliness, which is associated with many psychological and physical health problems, said Ragusea.

One of the biggest problems with Medicare is the limited access older adults have to mental health services, according to Lynn Cooper, the beh…