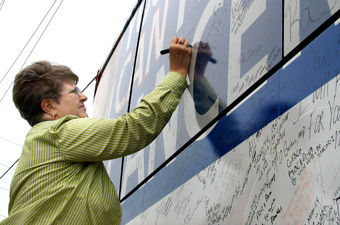 Sandra Winn, director of telecommunications at Evangelical Community Hospital, signs the Fight Back Express bus Wednesday at the hospital. 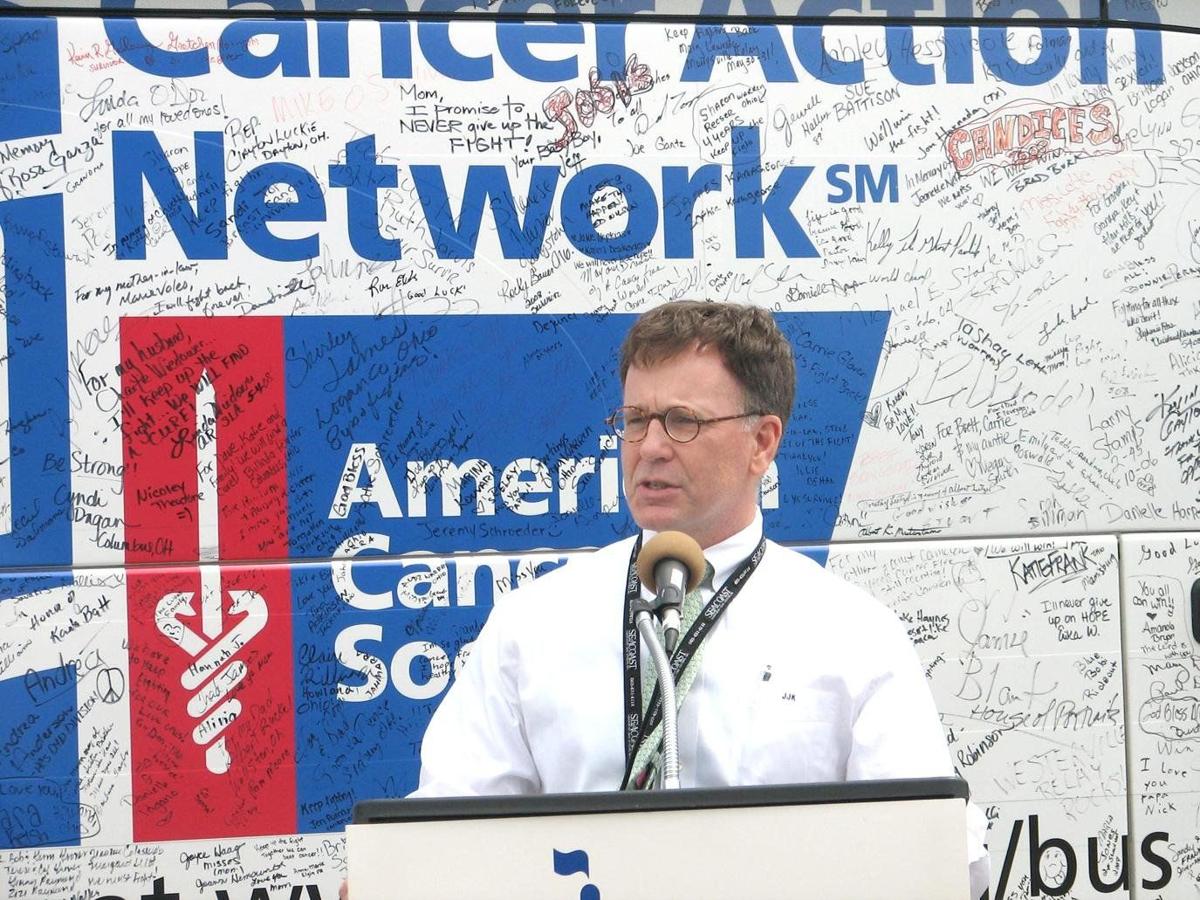 Sandra Winn, director of telecommunications at Evangelical Community Hospital, signs the Fight Back Express bus Wednesday at the hospital.

LEWISBURG — “Making my voice be heard for you dad.” “For you mom, I miss you.” “For all the ones I’ve loved and lost and those I love and survived.” “Fight for my future as I continue to fight for yours.” Messages of faith, hope and remembrance could be seen covering the Fight Back Express bus as it made a stop at Evangelical Community Hospital May 14 during its tour across the nation. An American Cancer Society Cancer Action Network program, the bus is traveling the country in hopes to raise cancer awareness and make it a national priority with elected legislators. Covered in a wrapping, the bus is serving as a petition to increase funding and access to health care, said John Held, a communications director with the American Cancer Society. Once covered, the wrapping will be removed and a new one put in place. He anticipates at least six wrappings to be filled, which he said could include up to 15,000 to 20,000 signatures. The bus will travel the nation, covering 25,000 miles, until election day on Nov. 4. “We’ve had an excellent response,” Held said. “Hundreds show up. Cancer survivors, those affected by the disease ... it’s neat to see people come out to see the bus and take action.” Held said he traveled across Pennsylvania, where the bus made 13 stops encouraging people of all ages to help take a stand. “It’s been a long, exhausting, but amazing trip. To see survivors sign the bus, it’s all worth it. ... We were parked on a street in Pittsburgh,” he said, “and a mom saw our bus and stopped with her 3-year-old son who was a cancer survivor. It was amazing to see him sign.” During the event at the hospital, two laptop computers were also set up with a webcam in which individuals were able to snap a photo of themself and type out their story. The message and photo were sent directly to the appropriate legislator. “You can’t help but get excited,” Karen Maurer, a cancer control specialist in the North Central region, said. “It’s a big bus with a big message.” Maurer addressed the crowd, saying there are 10.5 million cancer survivors, and if they can battle the disease, “our nation can rise to defeat it.” Hospital president and CEO Michael O’Keefe said the bus is on a worthwhile journey with a successful ending, and medical director of Pathology Services John J. Kryston Jr. spoke about both his and his wife’s battles with the disease. “The disease touches practically everyone’s life someday, somewhere,” he said. The bus was launched May 4 in Cleveland, Ohio, and will continue to educate the public, lawmakers and candidates about the importance of government as a critical partner in defeating cancer. “It truly is a journey,” Kryston said, “and one day everyone on the journey will complete the journey. One day we will beat this battle and we will finish this journey.” n E-mail comments to gmorton@dailyitem.com.