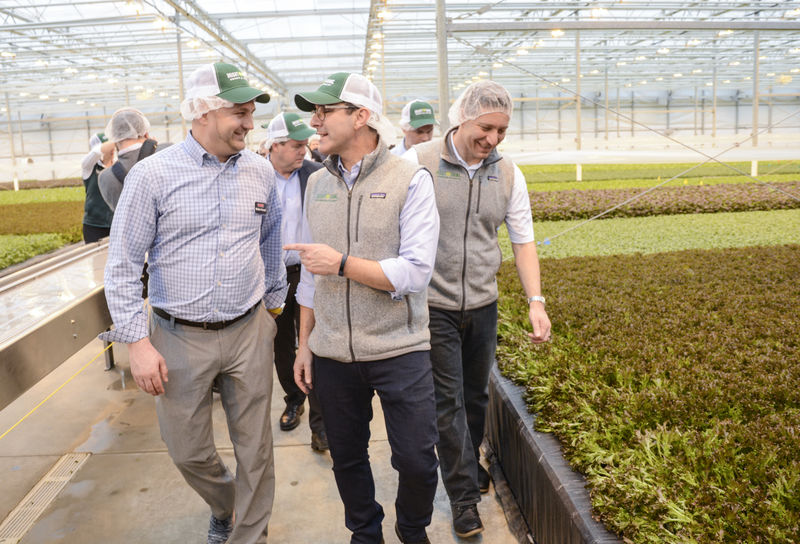 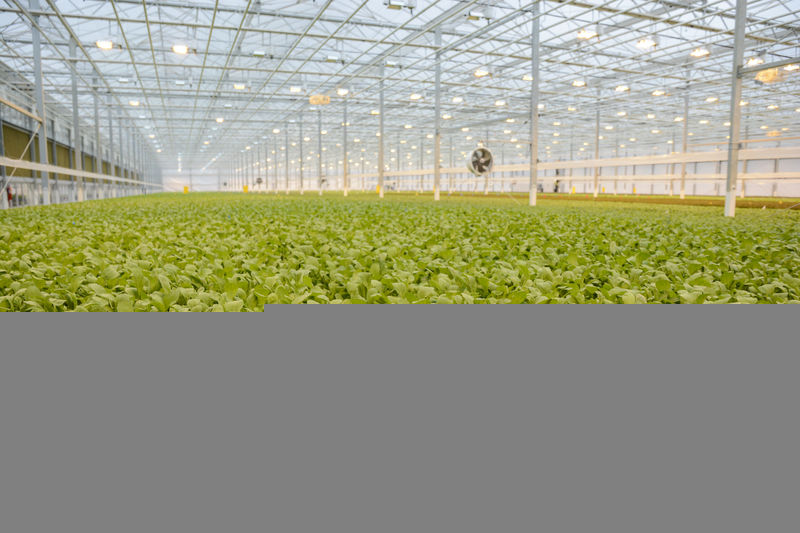 Robert Inglis/The Daily Item A new crop of greens at Bright Farm's in Selinsgrove on Tuesday. 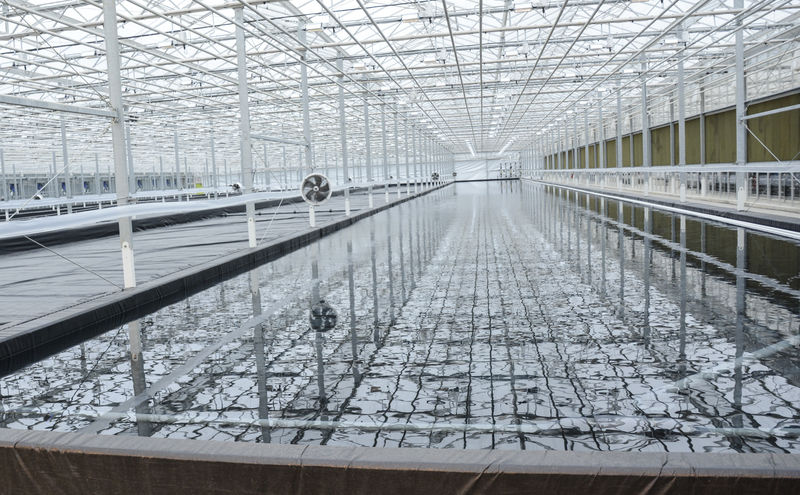 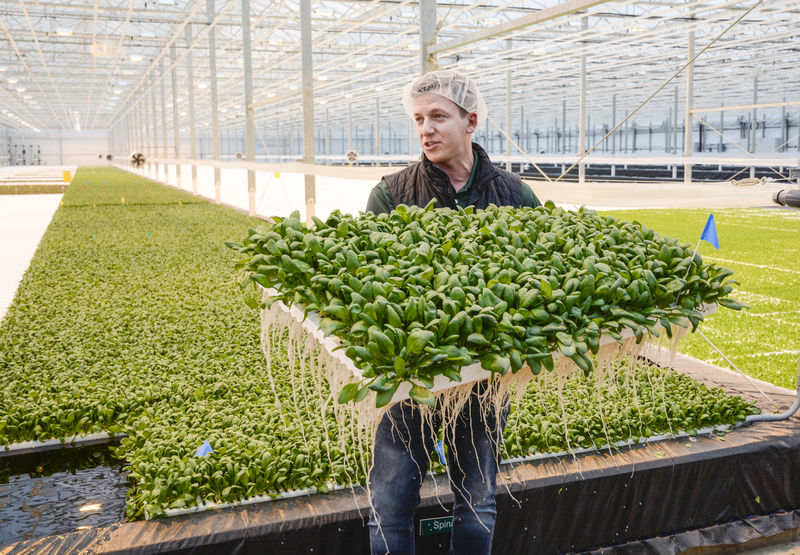 Robert Inglis/The Daily Item Bright Farm's Director of Operations Dominick Mack holds up a crop of spinach at their new facility in Selinsgrove on Tuesday. 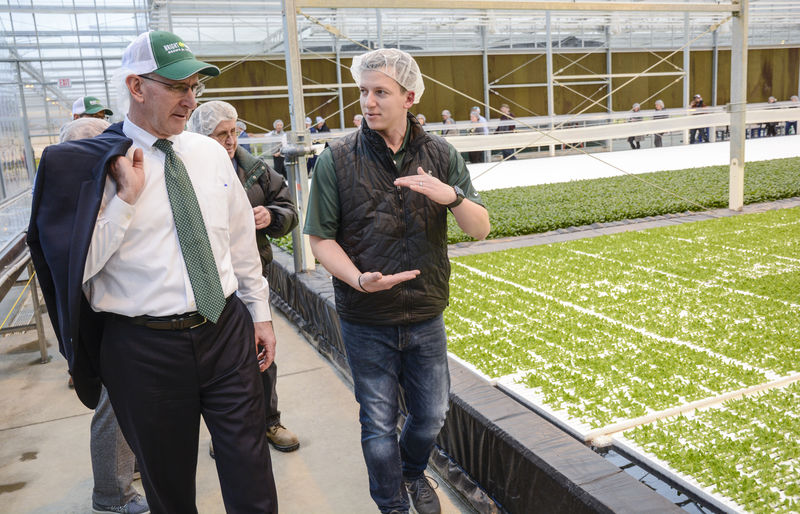 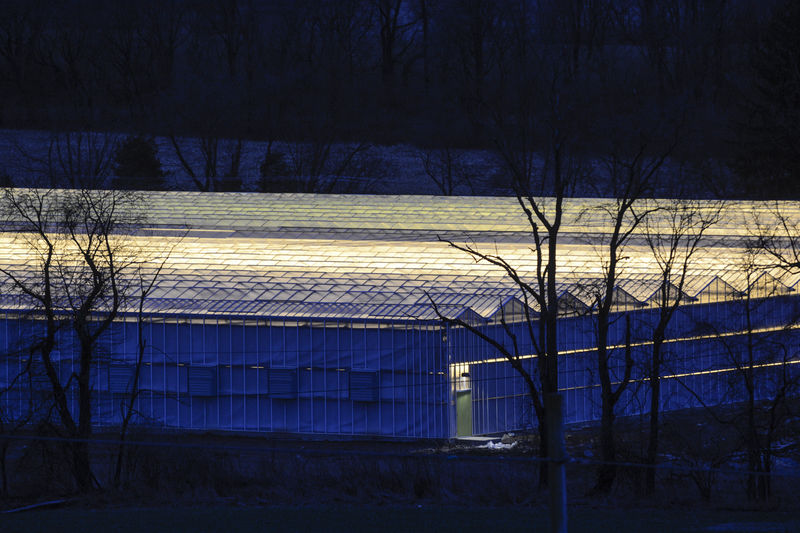 Robert Inglis/The Daily Item A new crop of greens at Bright Farm's in Selinsgrove on Tuesday.

Robert Inglis/The Daily Item Bright Farm's Director of Operations Dominick Mack holds up a crop of spinach at their new facility in Selinsgrove on Tuesday.

SELINSGROVE — The first harvest of 5,000 pounds of salad greens grown at the newly opened BrightFarms hydroponic greenhouse is being donated to the Central Pennsylvania Food Bank.

Executive Director Joe Arthur praised the donation to his nonprofit organization during a ribbon-cutting event and tour Tuesday at the $20 million, 280,000-square-foot greenhouse in Pawling Station off Route 522 in Penn Township

"We want to make sure our neighbors in need are eating healthy food. We care about the product we provide," said Arthur who was among 200 people at the event attended by Pennsylvania Agriculture Secretary Russell Redding and Snyder County Commissioners Joe Kantz, Chuck Steininger and Adam Ewig.

The greenhouse is the largest of the five facilities operated by the Irvington, N.Y.-based firm. The others are located in Bucks County, Pa., Ohio, Illinois and Virginia.

Once it is fully operational, the facility will employ 50 and produce about 2 million pounds of arugula, spinach, butter lettuce, pak choi, romaine and kale salad greens annually which is sold at Giant Stores and other markets in the East Coast.

Dominick Mack, director of operations, led a small group through the greenhouse showing how the seeds are put on a styrofoam board covered in a peat moss mixture and run through an automated seeding system. The seeds are then placed in one of six temperature- and humidity-controlled germinating rooms for a day before being installed in large ponds in the greenhouse under a glass roof equipped with fans and lights used when natural sunlight isn't available.

The boards are reusable for about 10 years, said CEO Steve Platt.

"We're turning over crops like crazy," said Mack, adding that depending on the variety, the growing time takes between 12 and 20 days.

SELINSGROVE — On some nights, warm orange glow blankets the Valley from the 263,000-square-foot BrightFarms facility at Pawling Station off Ro…