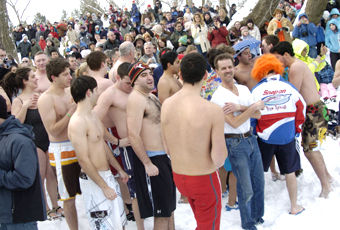 A large crowd on a hill gathered to watch as people ran into the icy Susquehanna River Saturday afternoon in Lewisburg as part of the Polar Bear Plunge. 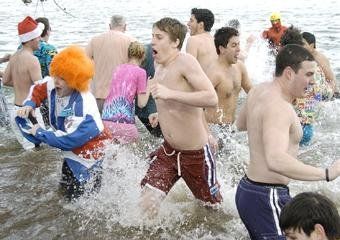 About 100 people, mostly Bucknell University students, brave the bone-chilling waters of the Susquehanna River in Lewisburg Saturday during the Heart of Lewisburg Ice Festival?Polar Bear Plunge.

A large crowd on a hill gathered to watch as people ran into the icy Susquehanna River Saturday afternoon in Lewisburg as part of the Polar Bear Plunge.

About 100 people, mostly Bucknell University students, brave the bone-chilling waters of the Susquehanna River in Lewisburg Saturday during the Heart of Lewisburg Ice Festival?Polar Bear Plunge.

It’s not so much about how little they wore, those Bucknell University students who undressed in 28-degree temperatures and scampered into the 34-degree waters of the Susquehanna River during Saturday’s Heart of Lewisburg Ice Festival. As always, there were dozens of women in bikinis and men in Speedos. But these days, it’s also about how much they wore in the annual polar bear plunge. One guy hit the water in a turquoise tutu and another in an Uncle Sam top hat. A woman complemented her two-piece swimsuit with a multi-colored tassel cap ringed with fake dreadlocks. A group even mimicked the running of the bulls in Barcelona, Spain, as they rushed into the Susquehanna clad in white outfits, red scarves and sombreros. “They are getting creative,” Jenni Stieler, an ice festival committee member, said Saturday. About 100 Bucknell students tiptoed, walked or ran into the Susquehanna River, she said, some submerging themselves entirely, some stopping when the water reached their waists. A crowd of about 200 watched from the river bank near the St. George Street boat launch, where a 12 mph northerly wind, gusting to 19 mph, brought the windchill factor to 16 degrees. “It’s just a fun, crazy scene,” Stieler said. “It’s a unique thing to do. It ties in so perfectly with the festival and the way everything has evolved over the past seven years.” Linda Sterling, executive director of the Lewisburg Downtown Project, which organizes the festival, was pleased with the turnout despite earlier fears that an overnight snowstorm — which dumped about 6 inches — would deter visitors. “Lots of people came out for games (at Hufnagle Park) and the polar bear plunge,” Sterling said. “We had good, steady crowds. On Friday people were coming in to look at the ice (carvings). It was a fun atmosphere. The snow at first dampened spirits, but now it adds to the overall fun of the event.” Sterling said she would not know about occupancy rates at Lewisburg area hotels until Monday or Tuesday. “I am kind of afraid the snow might affect that facet,” she said. “We have people out surveying today.” The goal of the festival is to encourage foot traffic downtown, Sterling said. “The partnership looks at this event as not for the community — we want the community to be part of the event — but we also really want it to create business,” she said. “We’re about economic development, too. The partnership started (the festival) because it is such a slow time of year for businesses, after the holidays. Things just really dropped off drastically. We looked for something to put a buzz in a tired and depressing time of year. The whole idea is to highlight the downtown as the heart of the community and to create an event where people come together and also to bring in visitors.” Dale Walize entertained some of those visitors Saturday. The festival’s polar bear mascot stood on the Susquehanna River bank, getting his photograph taken with children and adults, and the paramedics and rescue crews on hand as a precaution. Although he didn’t jump into the water Saturday — doctor’s orders, after Walize had a heart attack two years ago — he has at past ice festivals. “It was cold,” he said. “Even polar bears don’t go in that temperature of water.”