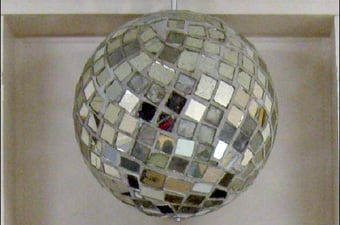 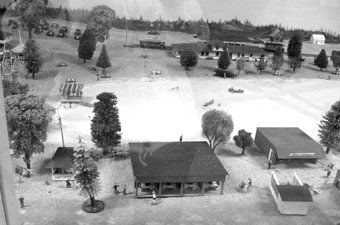 The museum also has on display an elaborate reproduction of the park, carefully constructed with the finest details.

The museum also has on display an elaborate reproduction of the park, carefully constructed with the finest details.

The People's Playground, later and better known as Rolling Green Park, was one of the area's most popular hot spots of its day. Those who remember the park might recall not only its dance pavilion but the crystal ball that hung above it. Now in the care of the Snyder County Historical Society Museum, the crystal ball was donated to the Society by Dawn L. Youngs on March 3, 2002. And beneath the crystal ball, housed in a large 7-foot glass case, lays an elaborate reproduction of this park, carefully constructed with the finest details. The artist who created this menagerie was Robert Troutman, of Selinsgrove. His family generously donated this to the society on Feb. 14, 1989. The history of The Peoples Playground goes back a long way. In 1907 a trolley line was constructed to run from Selinsgrove via Hummels Wharf, Shamokin Dam and into Sunbury. It was then that Guy Webster, president of the York Bridge Company, realized that potential trolley-riders needed a reason to travel on the trolley. In 1908, approximately 46 acres of land was purchased for $9,841.66 with the idea of a park as the trolley's last stop. During the first quarter of the 20th century, the People's Playground's rapid growth fueled the need for a new name, to be chosen through a contest. Mrs. Charles Kissinger, of Lewistown, dubbed it Rolling Green Park for which she received a $25 cash reward. From 1908-1944 a vast line-up of entertainment which featured well-known bands such as Tommy Dorsey, Buddy Rogers and Fletcher Henderson were held virtually every night and on Saturday nights, accompanying the music, were fireworks. The park's theater witnessed the talent and music of entertainers such as Edgar Bergen and Charlie McCarthy, George Jessel, Jeanette McDonald and Nelson Eddy. Later on, the theater became the fun house with a slowly turning barrel exit. Other popular rides were the tilt-a-whirl, the carousel and the Giant Twister roller coaster. Unfortunately, a gradual decline in attendance and revenue led to the sale of Rolling Green Park in 1935. In 1936, Roman M. Spangler Sr., of Red Lion, assumed ownership and managed the park until his death in 1966. The park continued to operate for several years, but by 1972, Hurricane Agnes did extensive damage to the park and it was felt the park would never regain its former patronage. Real estate developer Luke E. Bogar Jr. purchased the park from the Spangler estate. The land is now the site of Rolling Green Acres, a housing development. The Snyder County Historical Society Library has a wealth of information and pictures regarding Rolling Green Park. A model of the park and its crystal ball can be viewed during museum hours. The library also has for sale "Snyder County: Postcard History Series" by Jim Campbell in which he devotes an entire chapter to Rolling Green Park. The price is $19.95. -- Jane Kessler is the librarian at the The Snyder County Historical Society, which is located at 30 E. Market St., Middleburg. Library hours are Thursdays and Fridays 10:30 a.m. to 3:30 p.m. and Sundays 1:30-4:30 p.m., weather permitting. Also, visit www.snydercounty.org/schs and view "Items for Sale." For more information call 837-6191.