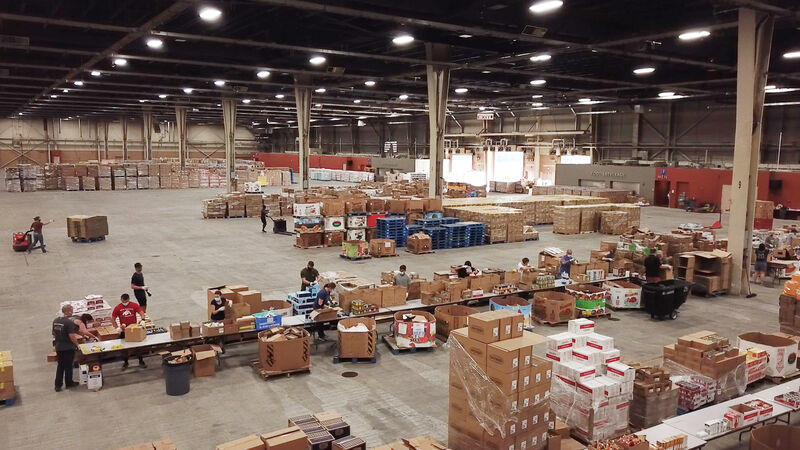 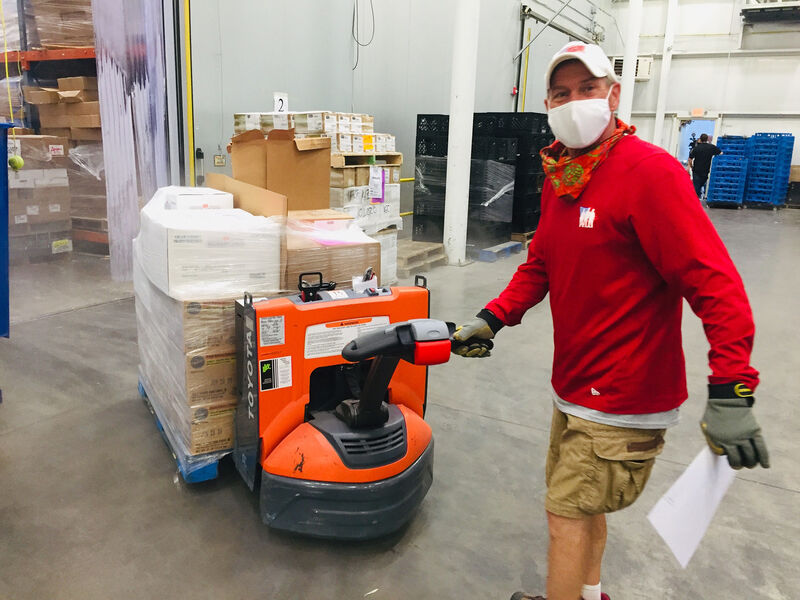 The Central Pennsylvania Food Bank and its Susquehanna Valley partners worked overtime in 2020 to meet the increased demand for food amid the pandemic and this year is following the same pattern.

"And 2021 is shaping up to be very similar to 2020," said food bank Executive Director Joe Arthur on Wednesday.

The need for food during the height of the pandemic just kept increasing, he said. By the end of 2020, the food bank provided 50 million meals to the 27 counties and 1,000 local agencies it serves.

The demand place upon the food bank's two healthy food hubs — one in Williamsport and one in Harrisburg — remains high.

On the week of March 9, 2020, a week before the pandemic was declared by the World Health Organization, Arthur vividly recalled, "we were already doing things like washing our hands more frequently, but that was about it."

Little was known about the virus. The organization's two main fundraisers — called Soup-and-Bowl events — had been held.

"It seemed like everything was fine," he said. "Life seemed normal."

A week later, he said, the pandemic was declared, "and we're like ... 'uh-oh.' The closures starting happening immediately. And we knew that we were in for a big surge. We have a helpline for people and it went crazy that very week. Every day. We had extra coverage, but the phones literally rang off the hook."

Arthur knew things had to be done in a different, safer way. Box packing became a big thing.

"We always pack boxes, but we knew that we were not going to be able to have pantries to open up their doors and let people in," he said, "so we started a crisis boxes program the first couple of days of the pandemic."

At the start of the pandemic, much of the food bank's supply of shelf-stable, non-perishable products were packaged into 30-pound crisis response boxes, which are twice the volume of normal boxes. According to a news release from the organization, volunteers produced 4,500-5,000 of the boxes each day in the early days of the pandemic, which made it easier for food pantries to distribute with limited or no person-to-person contact either at drive-thru or pick-up giveaways.

Arthur discovered the Central Bank's warehouse volunteer areas were not big enough to get the job done and keep everybody at a socially safe distance.

"We had a big COVID scare right away," he said. "Turned out the person was not positive, but in those days it took forever to get results. Twenty-four people that we really needed had to stay home for over a week until the test came back negative."

The solution to finding more space was unusual: They started talking to the people that owned the Farm Show Complex in Harrisburg. "We had the idea they wouldn't be doing much in that space for quite a while," Arthur said.

Within two days of discussions, they made arrangements to get compensated by FEMA because the rental on the Expo Hall would be expensive, Arthur said. They moved their packing operation into the Expo Hall by the end of March.

"We set up packing lines and adhered to all the COVID-19 protocols there," he said.

Since early April, every business day and Saturdays, 2,000-plus boxes are packed.

"That has sustained the crisis response for 12 months," Arthur said. "And it continues today."

Volunteers come in every day, put on masks and gloves, and put up with established protocols, but there has been a change in the demographic mix of volunteers.

"During the pandemic, we have been leaning more on the other groups ... businesses, church groups, student groups over 18 ... but we look forward to welcoming the older volunteers back when they get their vaccines and feel comfortable here."

Meanwhile, there has been no leveling off of service at the Central Pennsylvania Food Bank, where truck drivers have been putting in overtime.

"We've had to hire additional drivers since day one," Arthur said. But that wasn't enough in the first three months of the pandemic.

The Food Bank got offers from several trucking firms to help with deliveries.

The biggest story was FedEx in Harrisburg, Arthur said.

"For three months they delivered for us more than 100 tractor-trailer loads of food, at the very height of the crisis," Arthur said. "When we absolutely needed them, they were doing deliveries from the packing center at the Expo, to where we needed it. Amazing. An incredible show of company support.

"At the point where we had gotten things rewired," he said, "and handle things on our own, they went back to their business, which was also crazy busy."

At the Central Pennsylvania Food Bank's Williamsport Warehouse 10, Ron Laielli, of Loyalsock, a CDL Driver at the Williamsport Hub Location, said that “Before the pandemic we had five trucks that went out regularly from the Williamsport Hub to our partners in what we call the northern tier of our service area, delivering food to their distributions.

"We now have eight trucks that go out," Laielli said, "which is 70,000 pounds a day with some days hitting as high as 120,000 pounds. With the increased demand, we added two more drivers to make sure no one goes hungry.“

The pandemic has been awful for so many people, Arthur said.

"But there are some things we've learned from this. The generosity of people, foundations, and companies has just been unimaginable," he said. "So we have high confidence that we can continue this robust response ... even if it's for two more years, or however long it takes."

He said their food suppliers, businesses, from farm to fork, their grocery friends, Weis, Giant, Walmart, even the independents have been extraordinarily generous.

"Remember, at the beginning of the pandemic there was no guarantee we'd have enough food," he said. "It was a struggle, just like people in grocery stores. We experienced shortages on a grand scale."

The Department of Agriculture found a way to get food that was no longer going to closed restaurants into the food bank stream.

"It shows what we can do," Arthur said. "We've learned to do some things better, that we'll hold on to."

The food bank has started a night shift and can handle truckloads in the middle of the night when grocers are moving their trucks.

Arthur called it a "huge deal. We will continue with safer protocols, even when the COVID is gone. And, we are looking to build more sustainable local sourcing. We are building relationships with farmers, but we can do more."

Over the past 12 months, many of its local partners have kept their food distributions going by changing distributions to drive-thru pick-ups, as well as other creative solutions to abide by COVID-19 safety precautions.

Arthur estimates the pandemic will lead to elevated food insecurity for another two years. In December, nine months into the pandemic, the food bank had distributed 55 percent more food flow than the previous December.

"But we think the American Rescue Plan will be a big support for economic recovery," Arthur said.

In January 2021, there was a relief package that had, "some pretty positive impact on people we serve," Arthur said. "January to March to date have seen moderated demand. But we're still 25 percent above the pre-pandemic demand. That's historically high, but not at the crazy levels of last year. We think we'll be at this level for a few years."

The food bank budget in 2020 swelled to $20 million (cash expenditures) from $16 million the previous year.

Expenses to maintain food bank operation are up more than 35 percent. It cost about $500,000 more per month in 2020 for warehousing, freezers and refrigeration, transportation and distribution expenses as well as increased cost to acquire fresh, healthy food to keep up with demand.

Funding runs through the Pennsylvania Department of Agriculture. The food bank did get money for operating costs through the Coronavirus Aid, Relief, and Economic Security Act, also known as the CARES Act.

Pennsylvania’s strong COVID-19 mitigation efforts have left hundreds of thousands out of work, as non-life sustaining businesses closed their doors for the health of the state.

Lack of awareness of existing resources

Federal, state, and local programs may not be fully utilized.

Information is siloed and can be hard to find, especially for people who may have never had to access community supports before.

Usual supports may not be able to stretch far enough to cover the increased need.

More than 1.6 million Pennsylvanians have filed for unemployment compensation, widening the base of need across the state.

Older adults, those who are immunocompromised, those struggling with mental health or substance-use disorders, and families with infants and toddlers may have a harder time getting food.

Stay-at-home orders and recommendation that individuals wear masks while in public complicate public transportation. Lack of commonwealth-wide broadband access limits use of online ordering and delivery services for groceries, medicine, and other necessities, makes it harder for businesses to adapt to offer online services, and hinders applications for assistance.

The food supply chain is struggling to balance supply and demand challenges that arise with a shifting marketplace, resulting in supply challenges for grocery stores and the food pantries.

A combination of social, financial, educational, and geographic barriers make it harder than usual for those in need to access food.

The Central Pennsylvania Food Bank supplies packages and food to two dozen pantries and soup kitchens across the Valley. It serves 27 counties…