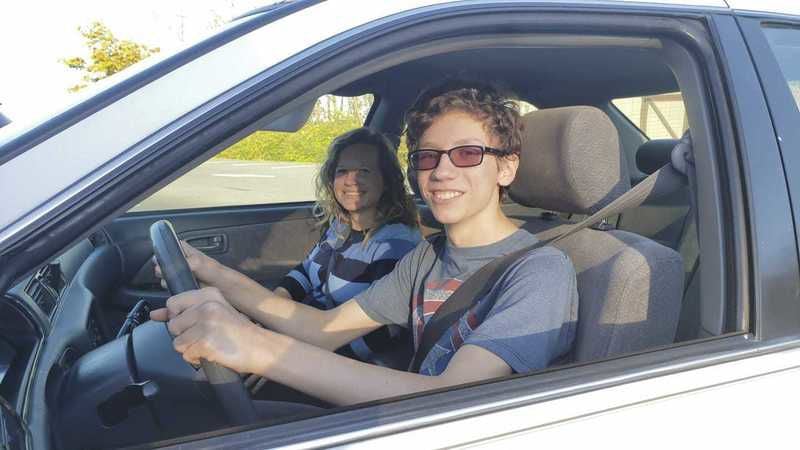 Jack Newell, 16, of Selinsgrove, has been learning to drive since May. Pictured here is also his mother Jess Newell at the DMV in Selinsgrove. 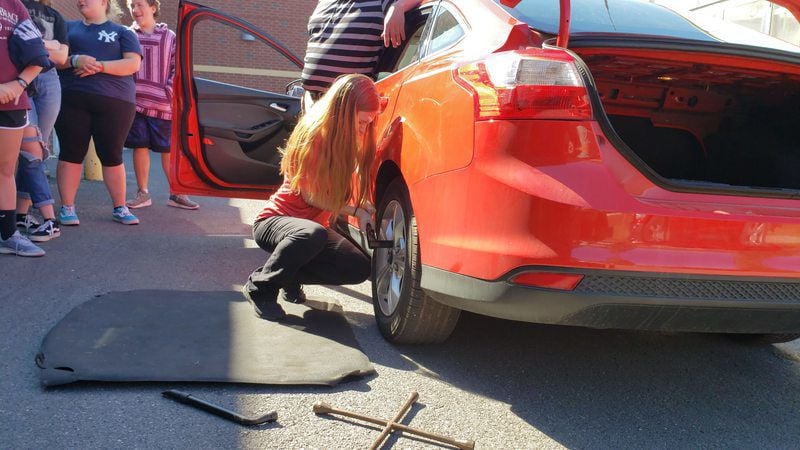 Midd-West Junior Cloey Werger, 16, of Beavertown, helps change a tire as part of the drivers education class at the high school. 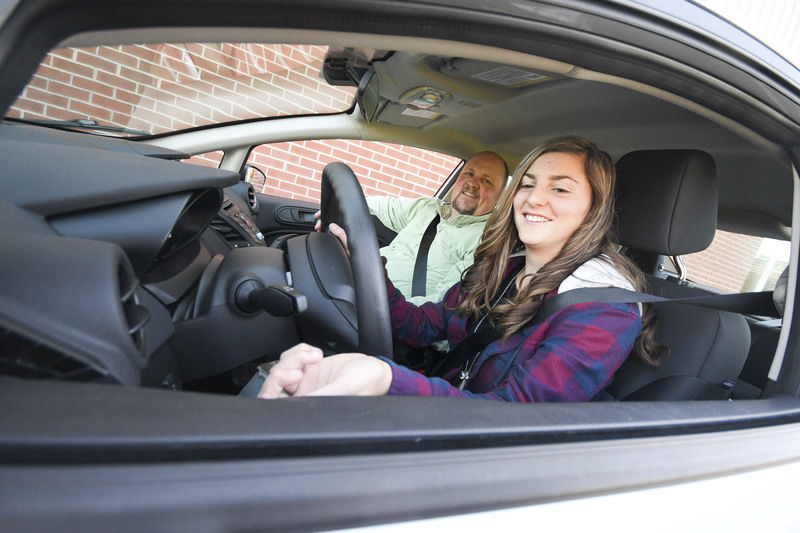 Rockell Keister, 16, of Mifflinburg, checks her mirrors while taking a driving lesson from instructor Brian Beward, of CSIU, on Thursday. 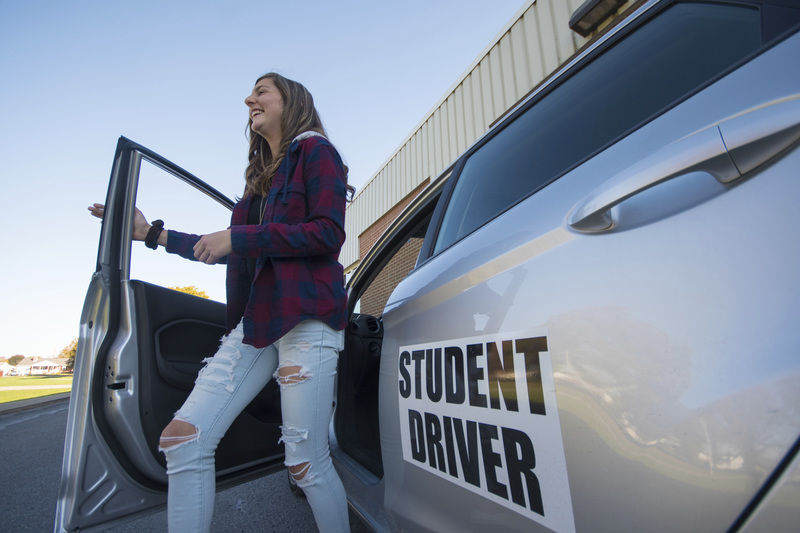 Rockell Keister, 16, of Mifflinburg, steps out of a vehicle while taking a driving lesson on Thursday. 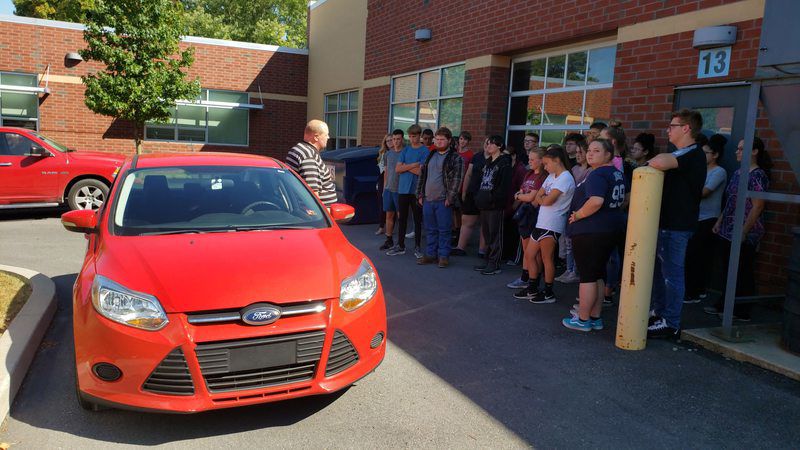 Brian Beward, the Drivers Education Instructor at Midd West High School, talks to students outside the high school about driving. 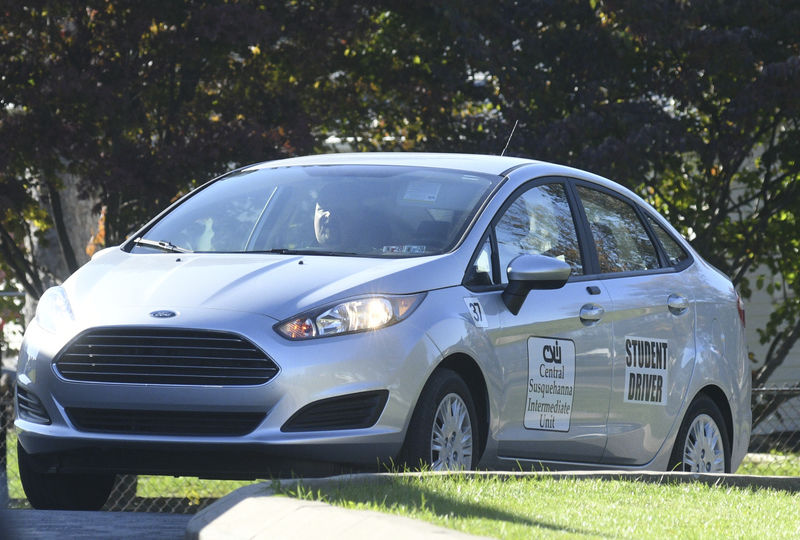 A CSIU student driver heads through Mifflinburg on Thursday.

Jack Newell, 16, of Selinsgrove, has been learning to drive since May. Pictured here is also his mother Jess Newell at the DMV in Selinsgrove.

Midd-West Junior Cloey Werger, 16, of Beavertown, helps change a tire as part of the drivers education class at the high school.

Rockell Keister, 16, of Mifflinburg, checks her mirrors while taking a driving lesson from instructor Brian Beward, of CSIU, on Thursday.

Rockell Keister, 16, of Mifflinburg, steps out of a vehicle while taking a driving lesson on Thursday.

Brian Beward, the Drivers Education Instructor at Midd West High School, talks to students outside the high school about driving.

A CSIU student driver heads through Mifflinburg on Thursday.

Locally, the number of teen drivers in Northumberland, Snyder, Union and Montour counties does not follow state trends; while the data still show fewer drivers ages 16 to 19 since 2009, it is not at a 10-year low. PennDOT recently observed Teen Driver Safety Week in Pennsylvania from Oct. 21-25.

"Unfortunately we do not have data on why teens may wait or may abstain from getting a driver’s license," said PennDOT spokesman Craig Yetter. "PennDOT’s focus is ensuring those that choose to get a driver’s license, regardless of their age, understand traffic rules and are capable of operating a vehicle safely."

Zach Walburn, 25, of Northumberland, waited until this year to learn to drive. He has his learner's permit now.

"Partially, it's because driving scares the daylight out of me, and partially because some of the places I've lived I could thrive without it because of good public transportation," said Walburn. "Moving back here to Pennsylvania, and realizing that if I ever wanted personal freedom on the scale I need I'd have to knuckle down and make it happen."

Walburn said he believes many people have hesitations about driving.

"We all get nervous thinking about what could happen in an accident or if we hit someone," he said. "Not many people take it as far as I did, though."

Some schools in Pennsylvania offer driver education as part of their curriculum. There are also third-party vendors who offer driver skills training in addition to driver education classes for a fee. PennDOT supports numerous local community outreach programs aimed at teen driver safety. Several years ago, PennDOT partnered with the PA DUI Association to develop a resource guide that contains safe driving-related resources that are available in the commonwealth, said Yetter.

Schools such as Midd-West offer driver's education, but not behind-the-wheel training. In order to get an insurance discount, students must take 30 hours of classroom time through the school year, according to instructor Brian Beward.

The class consists of basic maintenance and instructions, but students do not drive, he said.

Midd-West junior Cloey Werger, 16, of Beavertown, said she wants to get her license so she can get to work.

"I've been looking, but I want to get my license before I get a job," she said. "Everybody is usually pretty excited about getting their license.

Jess Newell, of Selinsgrove, has been teaching her second child, 16-year-old Jack Newell, how to drive since May.

"Most of my friends are excited to drive," said Jack Newell. "I didn't need it, but I am looking forward to the freedom. I won't have to wait until one of my parents is free."

The teen wants to drive to his job at Dairy Queen, to school and to hang out with friends.

"In our area, I feel like you need your license," said Jess Newell. "It's rural. If you don't get your license, you won't get around."

The instructors are certified by PennDOT in the End of Course Skills Test Program. This means the behind-the-wheel instruction includes 6 hours of in-car training and during the last hour of training, instructors can conduct the driver license test.

On Thursday, Beward, who also works as a CSIU instructor, was giving Rockell Keister, 16, of Mifflinburg, her final test around the Mifflinburg High School.

"Driving is a privilege," said Keister. "Not everybody's going to be able to drive. You have to actually know what you're doing and not just think you're going to pass."

Keister said a lot of her friends are waiting to drive because they're scared to be on the road. She knows college freshmen who are waiting to get their licenses.

"I honestly couldn't tell you why," said Keister. "I think it's mostly the other drivers and they're scared of accidents."

Beward said it does seem like students are waiting to get their license.

"I think a lot of it is there is more of a fear factor today," he said. "I think that many of them wait because of the money reason. It is not cheap to get a license, have insurance and go through the process. A lot of them are waiting until they have enough money saved up, or a job in order to get their license."

The CSIU program was implemented in the early '90s. There are five instructors, including Beward.

Last year, 432 students used the program, which is down over the last five years when it used to be more than 1,000, according to CSIU Leadership Coordinator Katherine Vastine.

At one point, schools helped pay a portion of the program, but now only Bloomsburg helps students pay for it. The cost is $120 for the 30-hour program and $360 for behind the wheel, she said.

"There are numerous factors that come into play with crashes involving teen drivers," said Yetter. "Most teen driver crashes are due to driver error caused by inexperience and distraction."

According to the National Institute of Child Health and Human Development, the highest crash risk for teen drivers occurs in the first six months and 1,000 miles of driving, said Yetter.

The risk of a crash involving any of these factors can be reduced through practice, limiting the number of passengers riding with a teen driver, obeying all rules of the road, and using common sense, according to PennDOT.

“Parents can encourage safe driving behavior by consistently modeling good habits behind the wheel, starting long before their teen gets a learner’s permit,” said Col. Robert Evanchick, commissioner of the Pennsylvania State Police. “We can each do our part to set a positive example by eliminating distractions, driving defensively, and ensuring everyone in the car is buckled up.”