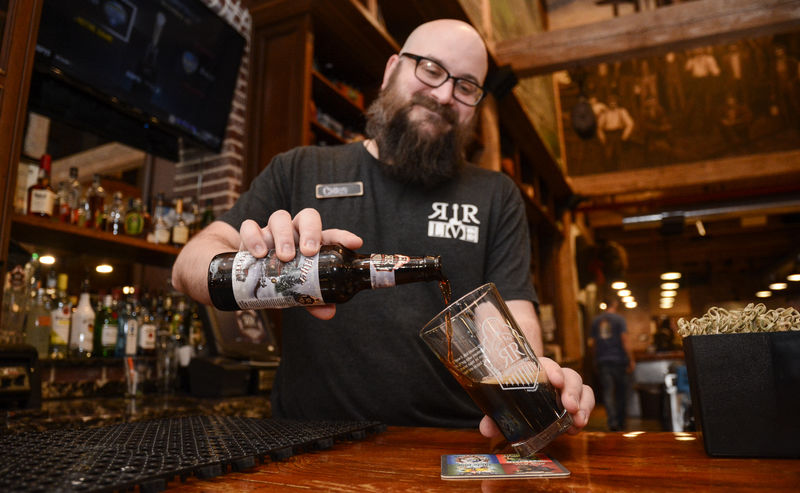 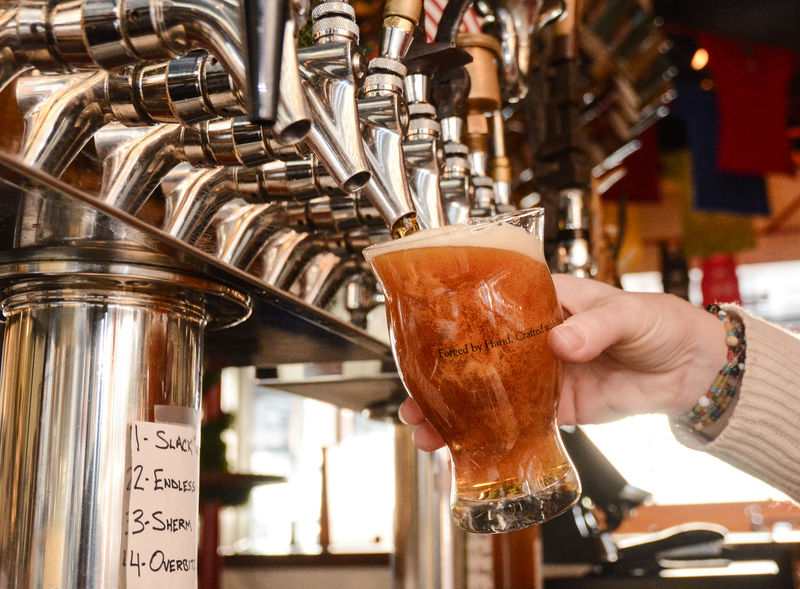 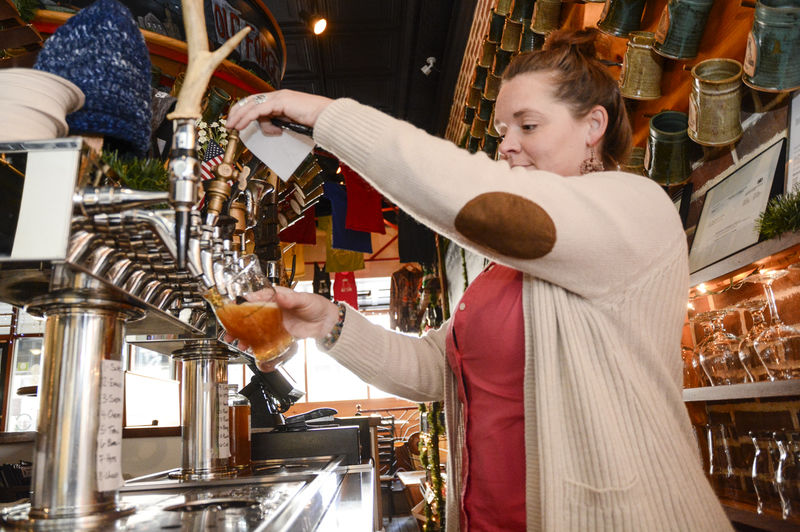 Kat Yannes, a manager at Old Forge Brewery in Danville, pours a beer on Tuesday. 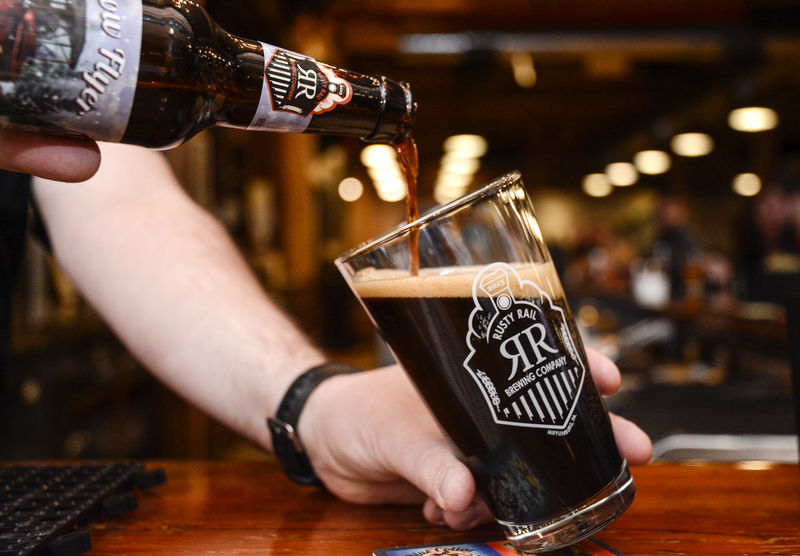 Robert Inglis/The Daily Item Chris Sampsel pours out a porter at the Rusty Rail in Mifflinburg on Tuesday evening. 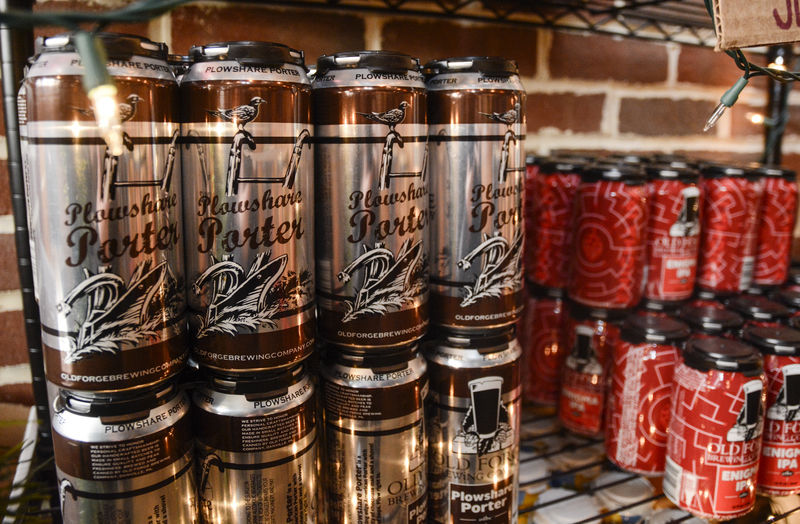 Robert Inglis/The Daily Item Six packs of Old Forge beer for sale at their brewery in Danville on Tuesday.

Kat Yannes, a manager at Old Forge Brewery in Danville, pours a beer on Tuesday.

Robert Inglis/The Daily Item Chris Sampsel pours out a porter at the Rusty Rail in Mifflinburg on Tuesday evening.

Robert Inglis/The Daily Item Six packs of Old Forge beer for sale at their brewery in Danville on Tuesday.

Craft beer isn’t cheap and it’s about to get more expensive.

Every dollar spent on malt or brewed beverages directly at Pennsylvania breweries will be taxed 6 cents beginning July 1.

The Department of Revenue issued a directive enforcing the state’s 6 percent sales tax on every pint, growler, bottle and can sold on-site at breweries and brewpubs — whether the brew is their own or imported from another manufacturer. The tax also applies to brewers’ off-site locations like taprooms and festivals.

The tax is direct to consumers. Brewers can tuck the tax into the advertised price or charge it at the register. Tax revenue is turned over to the state and deposited into the general fund. The tax doesn’t apply to sales at wholesale distributors, restaurants, hotels and bars independent of a specific brewery.

“When somebody walks in here, they probably feel like they’re getting nickled-and-dimed on a million different things,” said Rich Schrader, general manager, Rusty Rail Brewing Co., Mifflinburg. “That beer is the best part of their day sometimes. Now, they’re going to get hit with that, too.”

Pennsylvania’s craft beer industry is among the best in the nation. As of 2017, it ranked first among all states in production with 3.7 million barrels, second in economic impact at $5.8 billion, and sixth in total breweries with 282, according to the Brewers Association, a national organization for small and independent brewers.

The state Legislature moved over the last few years to allow off-site sales from breweries at taprooms and to sell beer from other brewers on-site. Though a sales tax may appear new to consumers and brewers alike, Department of Revenue spokesman Jeffrey Johnson said its been on the books for 50 years.

“What the department did was issue a sales tax bulletin in July to make this point clear,” said Johnson, communications director. “The Tax Reform Code of 1971 specifically states that a manufacturer of beer shall collect and remit sales tax on sales of beer to any person for any purpose except to distributors or importing distributors.”

Johnson said an estimate on the potential tax revenue wasn't calculated but that it'd be a "small portion" of the total $10.4 billion in sales taxes collected across the state on all products in 2017-18.

Craft brewers were to begin collecting the tax in October but successfully lobbied to have it delayed to July 1. Expect that lobbying effort to continue toward thwarting the collection altogether. Trade associations supporting distributors along with heavyweights like Anheuser-Busch and MillerCoors lobbied to have the tax effective this fall but also said craft brewers were given an unfair advantage on the tax since they're paying it "earlier and lower in the distribution process than any other retail licensee," according to a press release.

Restaurants and bars, not their customers, pay a sales tax on the wholesale price. If a sales tax is to be applied to craft brewers, Malfara said it should be similar to that.

“The craft brewing industry in Pennsylvania has seen tremendous growth in the past 10 years, primarily due to the opening of new breweries, taprooms and brewpubs. We propose paying a fair sales tax based on the wholesale price of the beer as other bars, restaurants and retail outlets currently pay,” Malfara said.

“I am not aware that I have been contacted by any of my local breweries on this issue. I am keeping an open mind as to a final solution. The craft breweries and their brewpubs have been well-received in the local communities. However, there does appear to be a fairness issue if the state is collecting a tax on Yuengling in the distribution system but not on craft beers being sold directly to the consumer,” Gordner said.

State Rep. Kurt Masser, whose Wayside Inn outside Shamokin is a bar and restaurant, opposes the tax on craft brewers. He called it a “money grab.”

“I think they see an industry flourishing and a way to grab more money. If anything, we should try to help the industry grow instead of taxing it more. I’m not in favor of it,” Masser said.