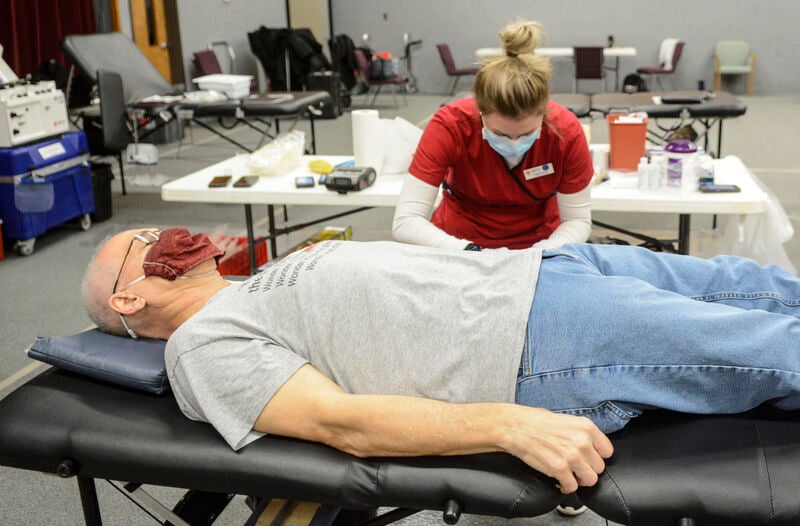 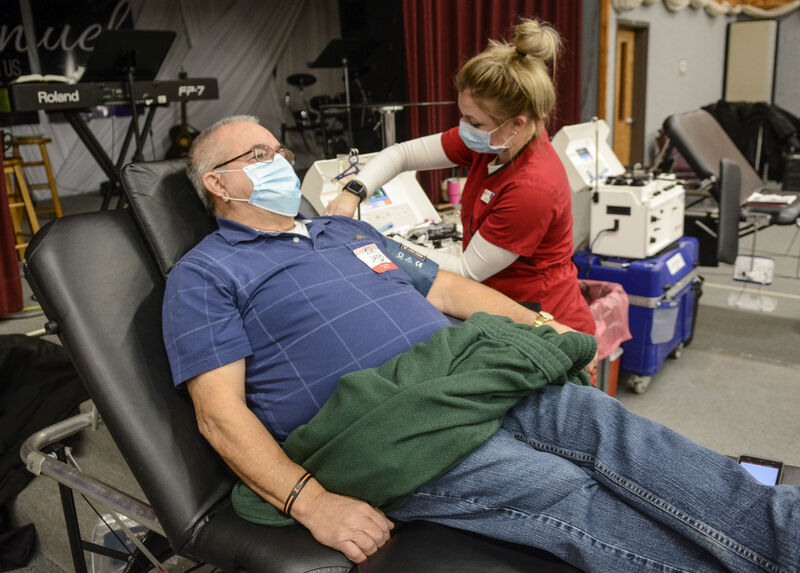 Robert Inglis/The Daily Item Jake Myer of Mifflinburg talks with collection tech Sierra Matash while donating blood on Tuesday at the Buffalo Valley Church of the Brethren in Mifflinburg. 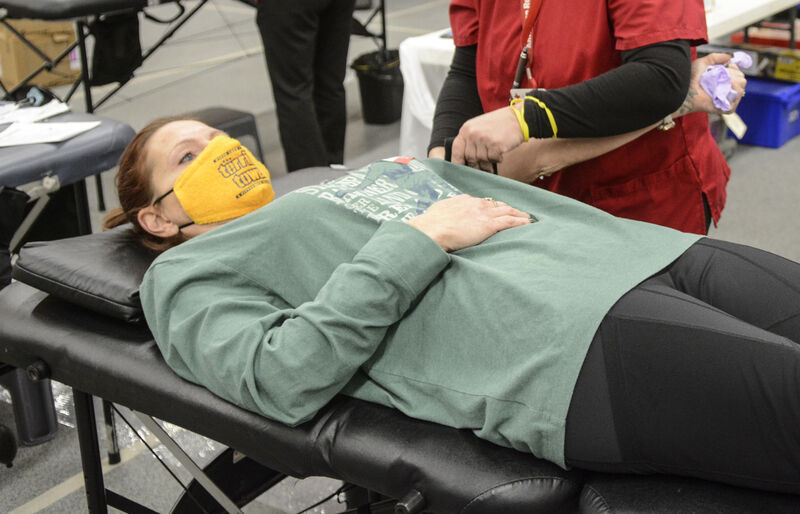 Robert Inglis/The Daily Item Jake Myer of Mifflinburg talks with collection tech Sierra Matash while donating blood on Tuesday at the Buffalo Valley Church of the Brethren in Mifflinburg.

The surge of COVID-19 cases that began last fall taxed the country’s supply of convalescent blood plasma and the American Red Cross is pushing to restore it.

Evangelical and Geisinger hospitals each use the plasma to treat patients hospitalized with the disease. The plasma is collected from people who contracted and recovered from the virus as it contains antibodies. It can be donated by those who experienced symptoms as well as those who were asymptomatic.

The use of convalescent blood plasma increased by 250% nationwide since October, according to Dr. Erin Goodhue, Red Cross medical director of clinical services. Demand for plasma outpaced collections by between 1,000 and 1,500 units per day in November, according to a joint statement from national blood banks including the American Red Cross.

Dr. Gustaaf de Ridder, system director of transfusion services, Geisinger, said anecdotally that the treatment fares far better for patients at the start of their illness compared to those with severe symptoms.

Potential donors must have tested positive for the virus, either by nasal swab or blood draw, and must be symptom-free for 14 days, de Ridder said. Donors are encouraged to provide plasma within 3 to 6 months though the science behind the resilience of the antibodies is still developing.

The American Red Cross is pressing the public to act and is calling on anyone eligible to donate convalescent plasma to do so. There were two donation drives occurring simultaneously Tuesday at the Danville State Hospital and the Buffalo Valley Church of the Brethren in Mifflinburg.

“I had a positive test not too long ago. Hopefully, the antibodies do somebody some good,” said Mindy Denbow of Mifflinburg, who added she’s been a recipient of donor blood that helped save her life. “I like to pay it forward.”

Jake Myer of Mifflinburg was at the church’s drive. He said he’s a double red donor — two units in one sitting — and gives a donation every 2 to 3 months.

“I just feel I can give somebody a chance,” Myer said.

The American Red Cross began testing whole blood donations, which is the routine donation, for the presence of antibodies in June. The extraction of antibodies from such donations began Sept. 23, according to Alana Mauger, biomedical field marketing and communications for the Red Cross.

“Whole blood is always separated out into different components. One donation can help three people,” Mauger said of the different ways blood donations are used.

To meet current demand for plasma, Mauger said Pennsylvania’s Northeast and Central regions must collect 130 pints of blood daily. That effort was hampered at the start of the pandemic when donation sites universally closed before gradually reopening.

“We’ve been able to collect what we need to meet the overall patient need with the exception of this convalescent plasma component,” Mauger said.

Convalescent blood plasma therapy requires 1 to 2 units, de Ridder explained. Each unit measures 200ml to 300ml. Geisinger currently averages 20 to 40 new inpatients daily for COVID-19 and about 25% of them receive the convalescent blood plasma therapy, he said. It’s often ordered for someone hospitalized 5 days or less and who haven’t been intubated.

“It’s a majority of patients eligible in that situation. Most patients don’t end up on ventilators,” de Ridder said. “That doesn’t stop people from ordering it for patients in intensive care because they’re very sick and we’re trying to do everything we can for them.”

Geisinger does advocate during discharge that patients consider a convalescent blood plasma donation, he said. There’s a short deferral period for those who contracted the virus and received a vaccination but once the period expired, they’d be eligible to donate plasma, he added.