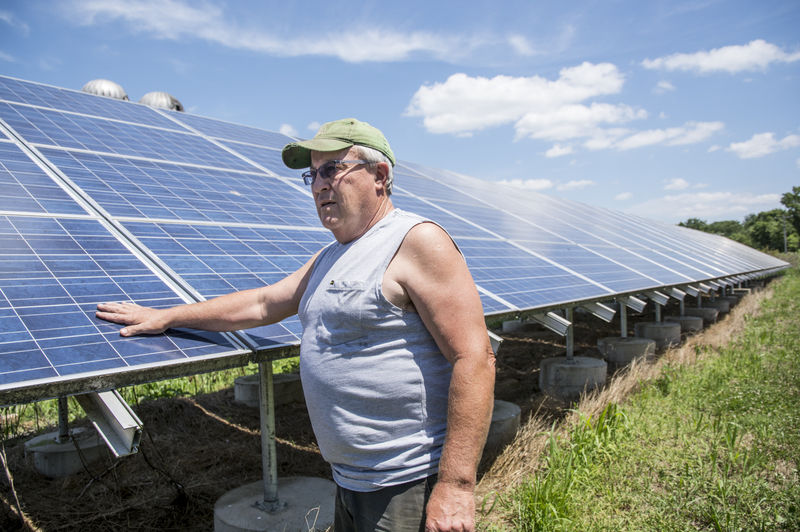 Robert Inglis/The Daily Item Farmer Dennis Spangler of New Berlin talks about his solar panels that he had installed several years ago. 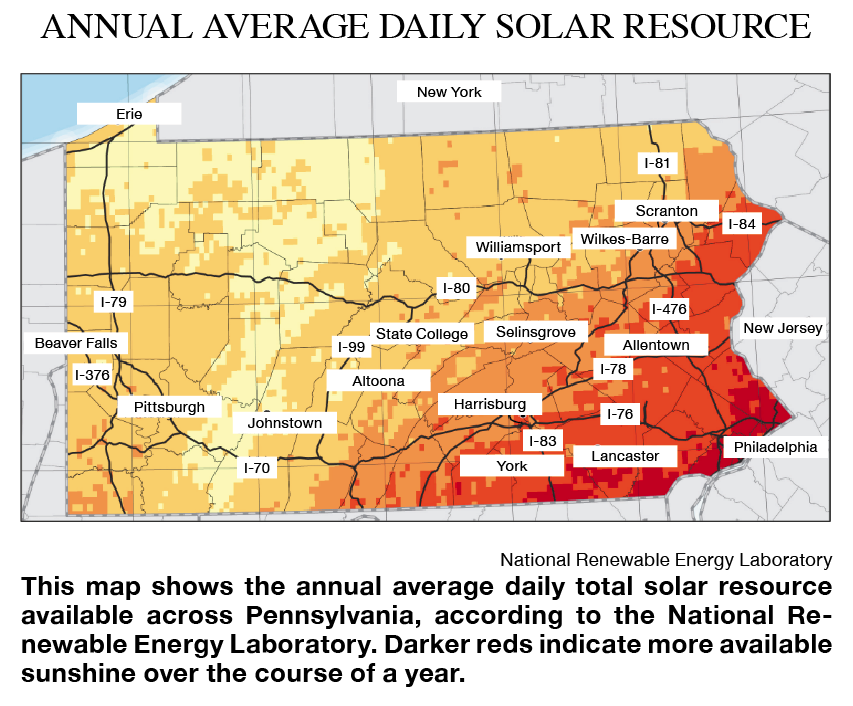 Sun rays shining on the Keystone State have become a coveted commodity, spurring plans for solar projects in the Susquehanna Valley and beyond.

Nine separate utility-grade solar energy projects are proposed to be built in Montour, Northumberland and Snyder counties, according to a database for the PJM electric grid. If constructed, they’d each tie into PJM, which serves 65 million people across 13 states and Washington, D.C.

The proposals include a 70-megawatt solar farm in East and West Chillisquaque townships and a 100-megawatt project in the Washingtonville area.

The increasing value of solar renewable energy certificates, combined with a state mandate that solar energy represents at least 0.5 percent of all electricity sold in Pennsylvania by 2021, have heightened interest in solar developments.

As the state and nation seek to increase inventories of clean energy, the build-out of natural gas pipelines across Pennsylvania is alleviating a glut of natural gas storage. Natural gas currently trails only nuclear energy when it comes to powering electric plants and it’s becoming increasingly popular for electric generation.

But, according to the latest Gas Outlook Report by the Pennsylvania Public Utility Commission, the price of natural gas is expected to rise because of demand. Altenburg thinks that projection has led to the increased interest in Pennsylvania solar.

“You look at the market and say, ‘solar is never going to be more expensive than it is today and natural gas is never going to be cheaper.’ You can see where the market is going today and it’s influencing companies to at least lock up the land acquisition,” for solar projects Altenburg, co-author of Pennsylvania’s Solar Future Plan, a 2018 publication of state Department of Environmental Protection, said.

Dakota Power Partners’ proposed farm in the Chillisquaque townships in upper Northumberland County will stretch across portions of 700 acres. A preliminary planning document identifies 15 landowners as leasing property to the Colorado-based energy company. The project is estimated at $75 million and according to the company, would generate enough electricity to power 13,000 homes. The ground-mounted system is projected to be completed by 2022.

“We’re getting close to completion of the land portion of it. We’d like to try and finalize it by the end of July,” company director Erik Duncan told officials of both townships at a joint planning meeting in early July.

Though hundreds of projects are proposed, the PJM queue’s history is littered with failed solar proposals. Just three of 216 proposals entered into the queue since 2007 are in service. The far majority are withdrawn.

All of the Valley proposals were made between September and March and all are in the pre-construction stages of development, the queue shows.

The systems, in theory, would provide a combined 336.4 megawatts of solar energy — an almost 29 percent increase over the state’s existing output.

According to the Solar Energy Industries Association (SEIA) formula, that’d be enough to power 40,368 homes in Pennsylvania, though such estimates tend to vary by source within the solar energy arena.

While two Valley proposals were identified independent of the database, the PJM info doesn’t state the exact location or company pursuing any of the projects. It does identify tie-ins to PPL substations in Sunbury, Milton, Danville and elsewhere.

New Jersey has the nation’s largest market for SRECs, or solar renewable energy credits, according to the brokerage firm SRECTrade. The Garden State’s electric sales goal of solar energy is 5.1 percent by 2021, 10 times that of Pennsylvania.

The value of an SREC, or solar energy renewable certificate, in New Jersey peaked at $235 so far this year. Compare that to Pennsylvania, where a credit peaked at $42 this year, SRECTrade reports. SRECs are purchased by utilities seeking to meet mandated levels of renewable resources in their energy portfolio.

The District of Columbia passed legislation in 2018 to transition to 100 percent renewable energy by 2041 including at least 10 percent from solar energy. Its maximum SREC value reached $410 this year.

Maryland’s SRECs reached $67.50 this year. There’s a mandate to have solar energy represent 2.5 percent of electric sales in the state by 2020 and recently adopted legislation moves that goal to 14.5 percent by 2030.

While lower than some neighbors, and substantially so, it’s a vast improvement from August 2018 when a credit in Pennsylvania was valued at just $7.50 due to market oversaturation as an open-border state.

Ron Celentano, a solar energy industry consultant with Celentano Energy Services, Philadelphia, said the saturation of “banked” SRECs continues to hold back the value of a Pennsylvania SREC. The credits have a life span of two-and-a-half years, he said.

“As that dwindles,” he said of the stashed SRECs, “then we’re going to be more sensitive to supply and demand and the price will rise.”

The state’s solar electricity generation stood at 0.24 percent in the first quarter of 2019, according to SEIA. That’s enough energy to power 53,267 homes, SEIA found, but just shy of the halfway point for Pennsylvania’s pending quota in 2021.

The PA Solar Future Plan recommends a 10 percent minimum for solar electric sales by 2030 and outlines 15 steps to get there, including the development of both utility-grade systems and distributed solar like rooftop and community systems. An estimated 60,000 new construction jobs alone would result from such a build-out, the report states.

Large solar energy systems may do well to help Pennsylvania reach its mandated and recommended solar energy quotas. Residential systems, for now, make up the bulk of the state’s solar portfolio.

Such systems are considered at about 1 to 3 megawatts. They’re constructed in a community and when locally owned, multiple nearby subscribers receive credit for the electricity produced.

The consumer sees direct savings in electric costs, similar to owning a rooftop system but without solar panels installed on their property. If approved by the state, virtual net metering — like net-metering for on-property systems — would allow them to sell excess electricity back to the grid. They can also share in the potential profits by selling SRECs.

Richards advocates for a moratorium in utility-grade developments. She says the downtime would allow further education for landowners considering lease agreements, explore potential negative impacts on the Valley’s farmland aesthetic posed by the installation of ground-mounted solar panels and consider the possible loss of prime farmland to solar fields that can limit agricultural production.

“The tipping point is if we take out too much agricultural land in an agricultural economy, that economy begins to fall apart,” Richards said.

Several bills are pending in the state Legislature to eliminate existing barriers to making Pennsylvania a community-solar state. Richards said community solar energy systems could be created under existing regulations but others say the proposed legislation is necessary.

Rep. Aaron D. Kaufer, R-120, is the prime sponsor of a bipartisan bill that aims to allow community solar in Pennsylvania. It “removes an existing policy and market barrier,” according to the bill memo, allowing off-site subscribers to join a community system anywhere in the state, be it community-owned or by third-party developers.

Richards cautions against third-party providers. They can develop a solar farm in a rural area, say Snyder County, and seek “community solar” subscribers in communities hundreds of miles away in metropolitan areas.

Though the cost of solar continues to drop — 34 percent over the past five years, SEIA found — Kaufer’s bill acknowledges it’s still out of the reach for many. The bill establishes targets to allow low-income and moderate-income residents to participate.

Housing type can restrict on-site solar energy systems. One’s house can be positioned in an unsuitable direction, have too much shade. Apartment building tenants would have to rely on landlords to install such a system.

“The goal is to make this so everybody has an opportunity to be part of renewable energy,” Kaufer said.

Solar energy is harvested most commonly by photovoltaic cells. The cells are semiconductors likely made of silicon. Light, consisting of photons, is reflected, absorbed or passed through the cells and transfers its energy to electrons which travel through the cell as electrical current.

The cells can be the size of a postage stamp to several inches across and are often less than the thickness of four human hairs. To allow them to withstand years outdoors, they are sandwiched between protective materials like glass and plastics.

The devices typically produce 1 or 2 watts of power and are chained together in panels to boost energy production. Several panels are connected to form arrays which can be connected to the electrical grid.

There are 64 solar energy-related financial incentives available in Pennsylvania, including ones from private firms like PPL and federal, state and municipal agencies. For a full list, the U.S. Department of Energy directs interested parties to visit the Database of State Incentives for Renewables & Efficiency at www.dsireusa.org/.

Year’s worth of power

The the amount of sunlight that strikes the earth’s surface in an hour and a half is enough to handle the entire world’s energy consumption for a full year. We lack the technology to harness the energy.

Every location on Earth receives sunlight at least part of the year, varying based on geographic location, time of day, season, local landscape and weather.

Concentrating solar power, used primarly in large power plants uses mirrors to reflect and concentrate sunlight onto receivers that convert the energy into hea, which is used to produce electricity.

Pennsylvania farmers are no strangers to solar energy systems.