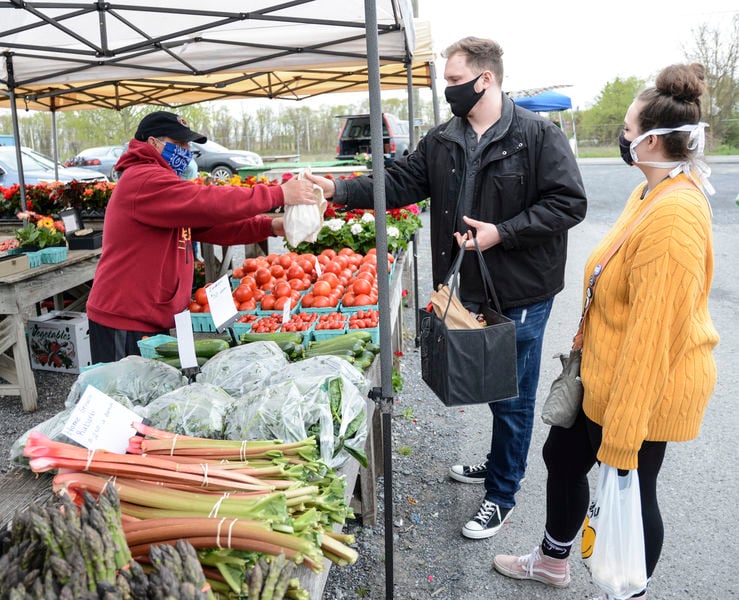 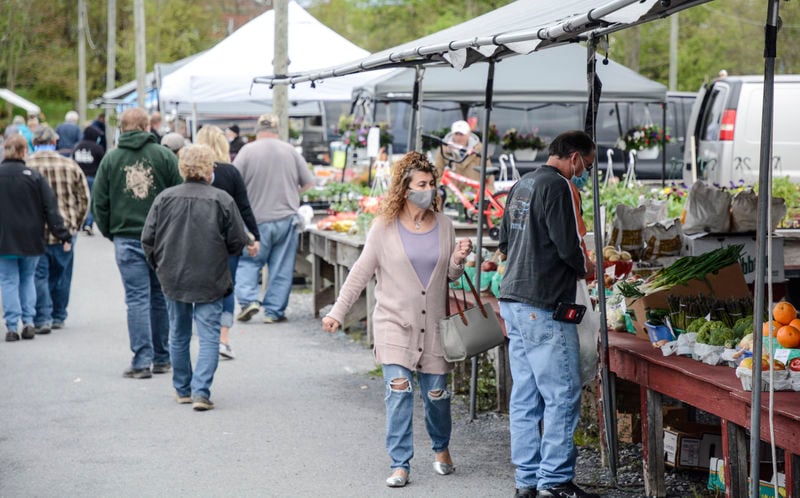 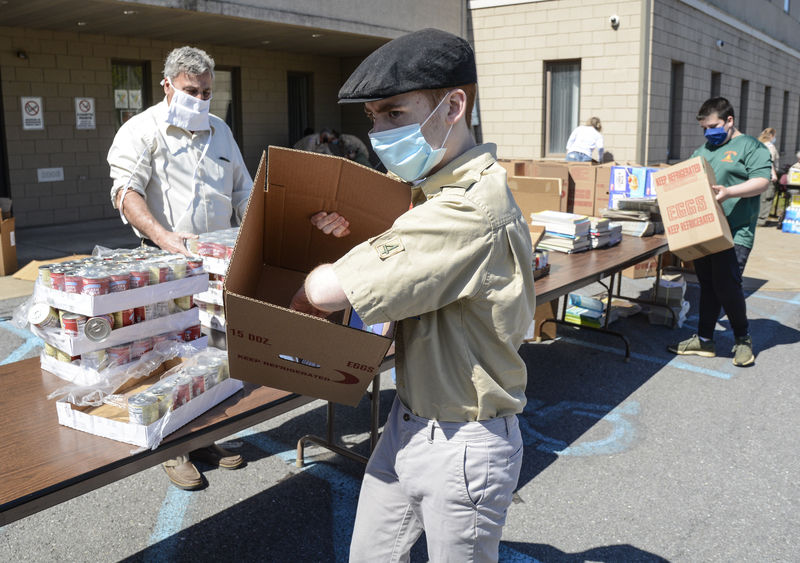 Robert Inglis/The Daily Item Boy Scout Tucker Snyder, 16, helps to pack up boxes of food and supplies in Sunbury on Thursday for families in need. 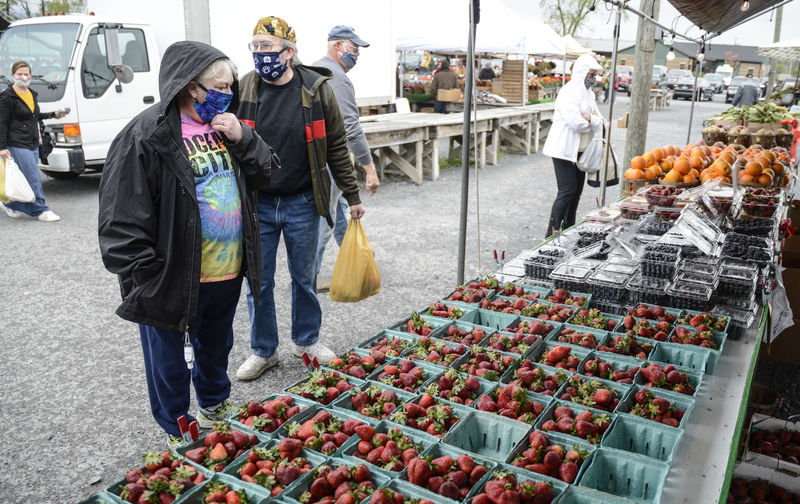 Robert Inglis/The Daily Item Bambi and Tom Bodnar of Muncy check out produce at the Lewisburg Farmers Market on Wednesday. 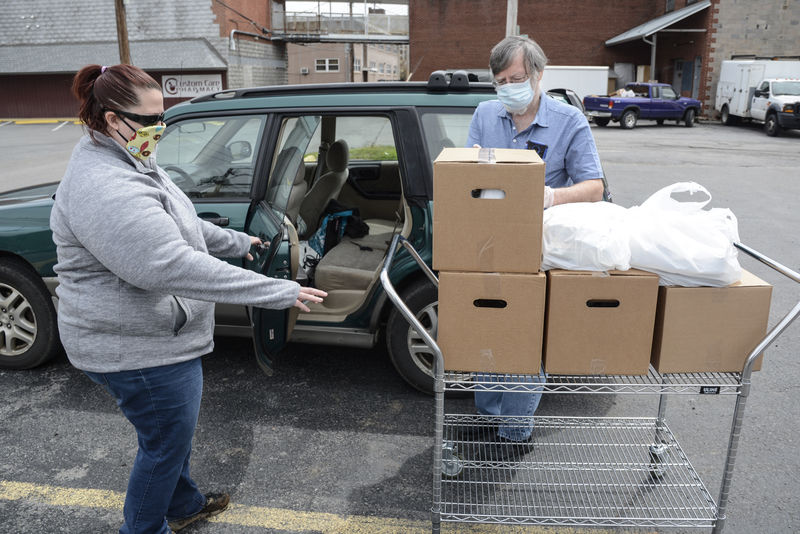 Robert Inglis/The Daily Item Typhynie Phillips, of Sunbury, gets help from Harold Raker loading up boxes of food for her and friends at the Sunbury Salvation Army. 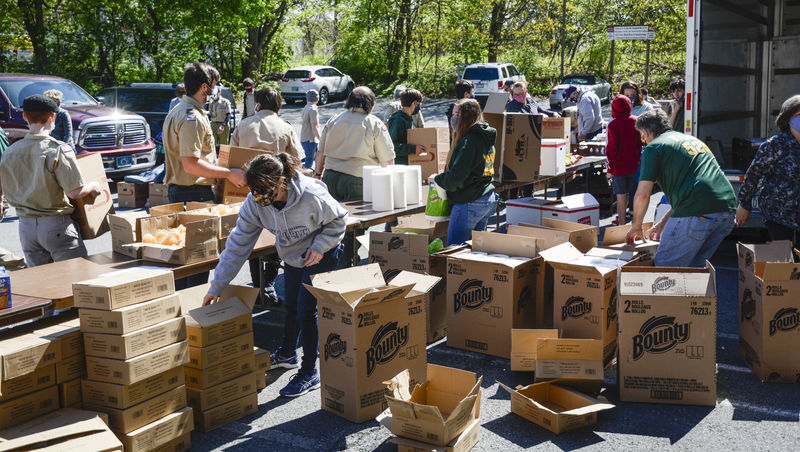 Robert Inglis/The Daily Item Scouts and their families help to fill boxes of food and supplies for families in need on Thursday in Sunbury. 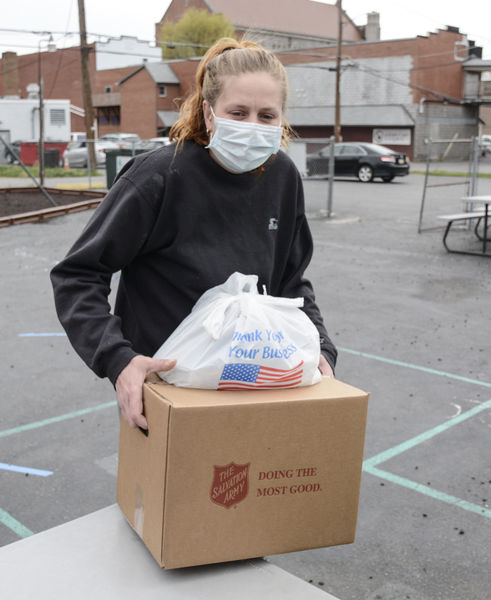 Robert Inglis/The Daily Item Lindsey Rebuck of Sunbury collects a box of food for her family during the Salvation Army's food giveaway in Sunbury. 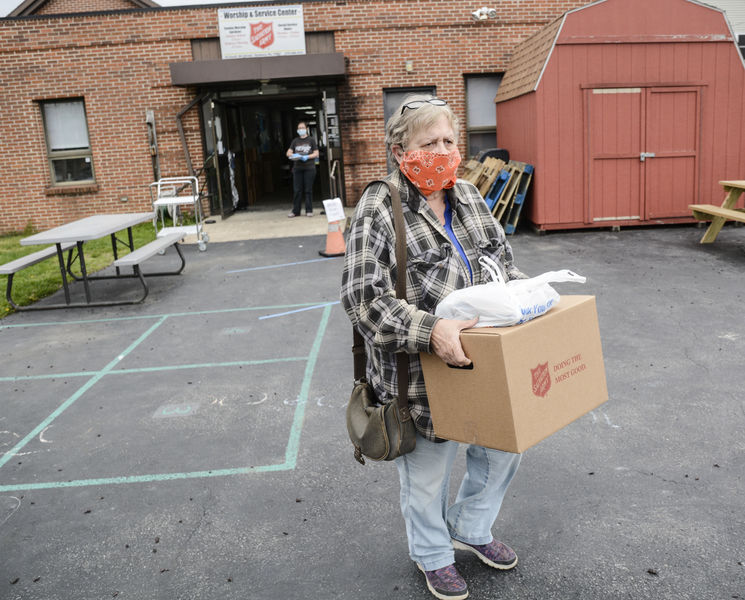 Robert Inglis/The Daily Item Patricia smokowitz of Sunbury gets a box of food from the Salvation Army in Sunbury during their food giveaway. 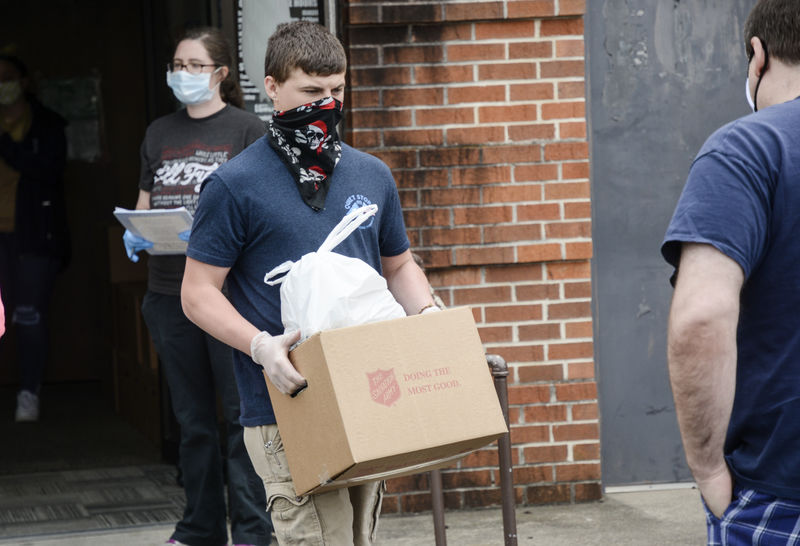 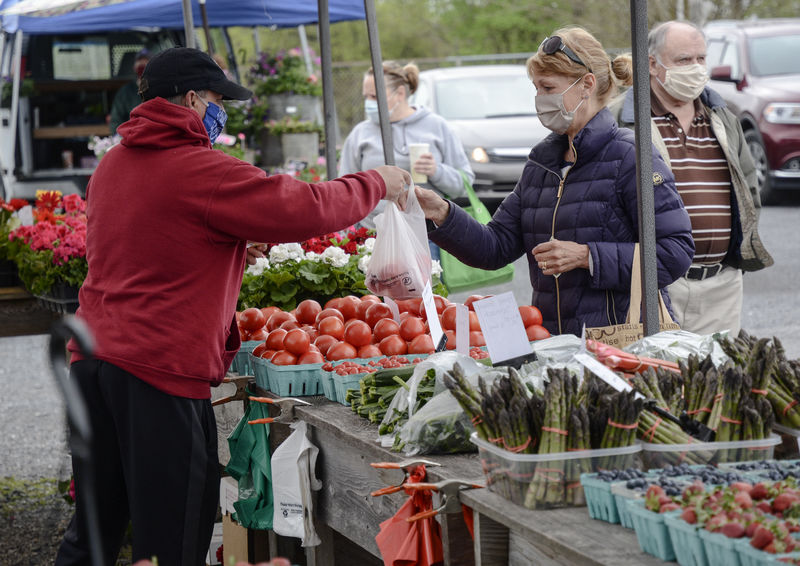 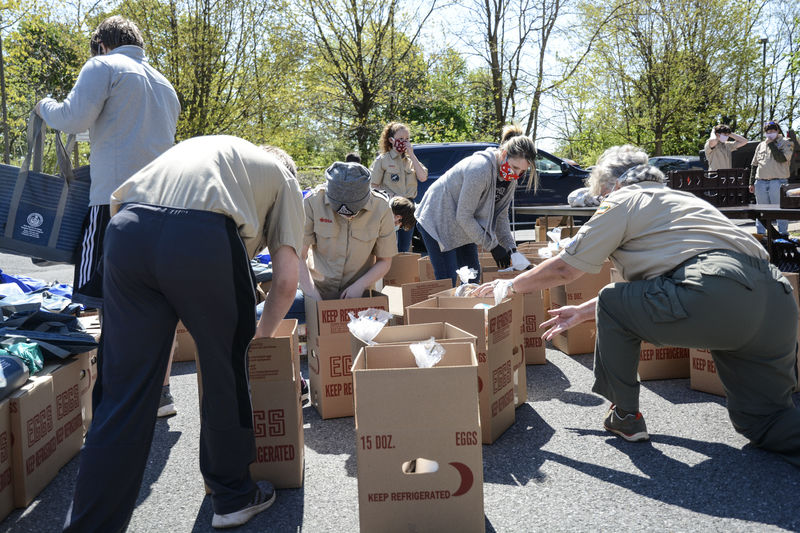 Robert Inglis/The Daily Item Boy Scout Tucker Snyder, 16, helps to pack up boxes of food and supplies in Sunbury on Thursday for families in need.

Robert Inglis/The Daily Item Bambi and Tom Bodnar of Muncy check out produce at the Lewisburg Farmers Market on Wednesday.

Robert Inglis/The Daily Item Typhynie Phillips, of Sunbury, gets help from Harold Raker loading up boxes of food for her and friends at the Sunbury Salvation Army.

Robert Inglis/The Daily Item Scouts and their families help to fill boxes of food and supplies for families in need on Thursday in Sunbury.

Robert Inglis/The Daily Item Lindsey Rebuck of Sunbury collects a box of food for her family during the Salvation Army's food giveaway in Sunbury.

Robert Inglis/The Daily Item Patricia smokowitz of Sunbury gets a box of food from the Salvation Army in Sunbury during their food giveaway.

LEWISBURG — A trip to the grocery store for Jason and Rebecca Washington takes planning and, in terms of good weather, a bit of luck.

The husband and wife from Lewisburg are parents of two children, one of whom is a newborn. They don’t have a car and Jason said he lost his job as a cook when the state-mandated business restrictions on restaurants.

The COVID-19 crisis caused the shutdown of non-essential businesses since March 19, leaving millions without income. Friday was the first day that Northumberland, Snyder, Union and Montour counties were allowed to enter the first phase of re-opening.

The struggle of many Valley residents during the COVID-19 crisis was highlighted this week when thousands of people backed up traffic in Shamokin Dam for two free gallons of milk. Dairy Farmers of America (DFA), a national dairy cooperative owned by dairy farm families across the U.S., teamed up with Greater Susquehanna Valley United Way, Greater Susquehanna Valley Chamber of Commerce and National Beef to provide more than 4,000 gallons of free milk to Valley residents.

The Washington family walks about a half-mile to the store, Jason said. They have to mind after their children along the way.

Without a car, the orders are smaller and the frequency of trips increases. Walking with a load of groceries, even if it’s a smaller order than average, presents its own challenges. And they’re met like other shoppers with dwindling supplies of certain grocery staples.

“I’m trying to find work wherever I can. It’s becoming a struggle but I’m a man of faith. I believe things will happen when they're supposed to,” Jason said.

Free meal distributions have popped up around the Valley, too.

Victory Baptist Church at 56 Abby Road, Selinsgrove, in partnership with Christ Community United Methodist Church has been holding a weekly chicken BBQ meal giveaway for the last four weeks. At a recent distribution, they had to turn people away after 500 meals were given out in an hour, said Pastor Rob Rines.

"It's a tough time, people need food, and it's nice to have a hot meal," said Rines. "We're trying to be an encouragement to the community. We feel it's time for the community to come together."

The church's food bank before the pandemic served on average 100 families each week, but there are now an additional 80 families that are using the services, Rines said. They are now open two days — 10 a.m. to noon Wednesday and Saturday — to accommodate the influx of families.

The weekly chicken BBQ meals will continue until there is no longer a need, he said.

Jessica Duperree, the co-captain of the Sunbury Salvation Army compares each week of food box distributions to Christmas because the number of people being served weekly skyrocketed in the last two months.

The organization at 40 S. Fourth St. used to provide five to 10 boxes of food for families a week with up to 70 people at the weekly soup kitchen but are now feeding about 400 families a week, she said.

"Hunger knows no quarantine," said Duperree. "We're still here, our doors are not closed to feeding people. It's one of the only things we're focused on, meeting the need for those who are hungry and have to stretch their limited means at this time."

The amount of people during the week is like food distribution during the holidays in December, she said.

"The amount of people we're serving, the amount of work we're doing, it's like Christmas every week," she said.

People are limited in the amount of funds they have right now, said Duperree.

"If we're able to provide something that they don't have to purchase or don't have the ability to get, then they can use what limited resources they have on other needs, like rental payments. We're just trying to help people with one of their basic, everyday essential needs: food."

"We are also doing same-day appointments on Wednesday and Thursday between 9:30 a.m. and 12:30 p.m. for boxes from the Central Pa Food Bank," said Duperree.

Helping self, helping others

On Tuesday, Typhynie Phillips, of Sunbury, picked up food from the Salvation Army in Sunbury for herself and her husband, but also for three other families. She said she started using food services when she found herself without full-time work during the pandemic.

"We've been struggling a little bit with the food," said Phillips, an employee of Century Services and SUNCOM who works with individuals with intellectual disabilities. "All our other money goes to bills."

The families she is helping with food delivery are clients and at risk, she said.

"I'm in better health," said Phillips. "Why have them risk it? It's not worth it.

Lindsey Rebuck, of Sunbury, said she came to the Salvation Army for her family of four: a husband and two kids, ages 2 and 7. She never used the services until the pandemic shut down the state.

"I'm off of work right now," said Rebuck. "He (her husband) works second shift. I'm at home with the kids by myself every night. Between me going to the grocery store and getting around while on unemployment, this helps me out."

Rebuck said they have cut back on spending and the food distribution helps the family budget better.

"It's fantastic," said Rebuck. "It gives us four days worth of food. To not have to plan out every single meal, focus on spending time with kids and doing their schooling, it's definitely been a blessing to not have to worry about this as much."

Patricia Smokowitz, of Sunbury, said she started using the Salvation Army for the first time last month. She said she and her husband make too much to receive food stamps.

"I'm retired, my husband is retired and is very sick," she said. "We needed the help. They don't take into account all the bills we have to pay. Every little bit helps."

Northumberland County Area Agency on Aging cases have gone up about 25 percent. There are more requests for meal delivery and general referrals, according to Agency Administrator Karen Leonovich.

The agency partnered with local Boy Scout troops to pack 350 boxes and hygiene bags for county senior citizens this past week. Those bags were packed and delivered on Thursday.

"Older adults are encouraged to stay in their homes because they are susceptible to COVID-19. They are not out shopping like they have been or their formal supports like family and friends were not available to shop for them," said Leonovich. "We have more and more older adults who have no food in their homes right now."

The Lewisburg Farmer's Market was packed with people on Wednesday.

Bambi and Tom Bodnar, of Muncy, said they didn't have any concerns about the novel coronavirus while they were shopping at the market. Jeanne and Paul Moulton, of Williamsport, said they come to the farmer's market once a month and feel about the same there as they do in a supermarket.

"Everybody's got their masks on," said Jeanne Moulton.

Austin Hopp, of Muncy, and Maddy Fetterolf, of Sunbury, came out to shop locally on Wednesday at the market.

"You're able to get better deals with a lot of the farmers because of everything going on. They want to get as much produce to people as possible," said Hopp.

Hopp said he does feel safer at the market.

"It's a little more open, a little more aired out," he said. "I feel like people are taking precautions compared to being cramped in close quarters at the grocery store."

David Heimbach, who owns a dairy and grain farm near Selinsgrove, said he has been fortunate so far not to have thrown away any product. However, he has been told by the co-op they ship to, The Dairy Farmers of America, that they are cutting back on the amount of milk.

"They asked us to cut back on 15 percent supply of regular shipping," said Heimbach. "If we don't cut back, they will dock 50 percent of the 15 percent we didn't reduce."

"I don't know how it will affect us yet," he said. "Farmers will probably cut back, and the demand will pick up. I don't know what's going to happen. We have to constantly look ahead."

Wilber Wheeler, the regional manager of the Dairy Farmers of America, said last week during the milk distribution that people are hungry and there is a need.

"We all know somebody who is hurting right now, or who lost their jobs," he said on Monday. "Folks are hungry. There is a need. The parking lot is full."

Wheeler said the milk is a product that may have gone to waste if it wasn't donated to the event. Schools closed and are not ordering milk for students, Wheeler said.

DFA has already donated more than 100,000 gallons of milk throughout five states, including Pennsylvania.

Food insecurity amid the COVID-19 pandemic