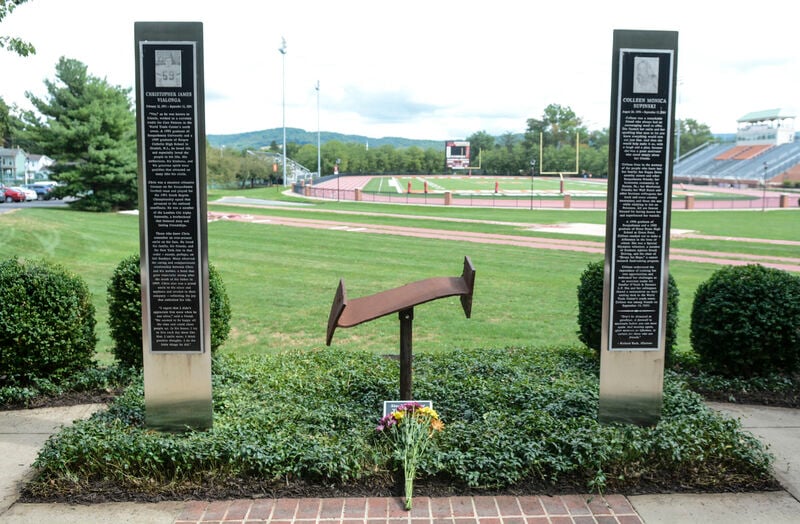 Robert Inglis/The Daily Item The 9-11 memorial at Susquehanna University honoring two graduates, Christopher Vialonga and Colleen Supinski, who died in the attacks on the twin towers in New York. 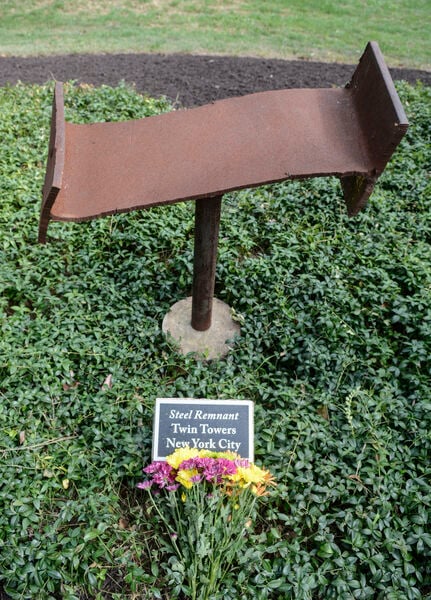 Robert Inglis/The Daily Item Flowers were laid at the base of the 9-11 memorial at Susquehanna University on Thursday. 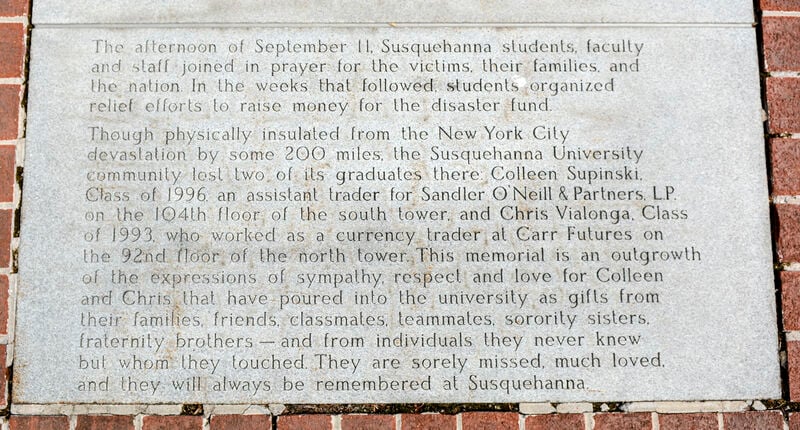 Robert Inglis/The Daily Item The 9-11 memorial at Susquehanna University honoring two graduates, Christopher Vialonga and Colleen Supinski, who died in the attacks on the twin towers in New York.

Robert Inglis/The Daily Item Flowers were laid at the base of the 9-11 memorial at Susquehanna University on Thursday.

Nineteen years ago today, the United States was attacked on several fronts by terrorists, resulting in the deaths of more than 3,000 people in New York City, Washington D.C., and Shanksville, Pennsylvania — a day that several Valley groups are memorializing.

Pa. Congressman Fred Keller, R-12, Kreamer, will be the keynote speaker Friday during Northumberland Borough's annual "We Will Remember" 9/11 memorial ceremony, 7 p.m. at the Gazebo in King St. Park.

“On September 11, 2001, the American way of life changed forever," Keller said Wednesday evening. "We remember all of the lives that were cut short and the first responders who ran towards danger instead of away from it. We also honor our military personnel who answered the call to fight for our freedoms. I look forward to joining with our community in commemorating these American heroes on Friday.”

The event is run by American Legion Post 44, in conjunction with Northumberland Borough.

Deiter said the Legion Post has been holding this memorial since 2002. "This is our eighteenth year," he said Wednesday.

At 12 p.m. Friday, Susquehanna University will hold a remembrance ceremony, which will be streamed on Facebook Live. At the ceremony, the Rev. Scott M. Kershner will honor Chris Vialonga, Class of '93, and Colleen Supinski, Class of '96, and all of those lost on the morning of September 11, 2001.

Both Vialonga and Supinski were student-athletes: Vialonga was an offensive lineman for the Susquehanna football team, and Supinski was a member of the track and field and cross-country teams.

Because of the pandemic, this year's ceremony is virtual, but the memorial is there for all to see. It is located near Susquehanna's James W. Garrett Sports Complex, facing the football field.

On the Bucknell campus, the College Conservatives Club will have the 9/11 American flags display out for the entire day Friday on the uphill portion of the Elaine Langone Center.

The Bloomsburg University Student Veteran Association will hold its annual 9/11 Memorial flag display on the Academic Quad near Warren Student Services Center Friday, in memory of those lost on 9/11. There will be moments of silence at the following times, all in the morning and coinciding with the times of the terrorist attacks: 8:46 a.m., 9:03 a.m., 9:37 a.m., and 10:07 a.m.

Meanwhile, Gov. Tom Wolf has ordered all United States and Commonwealth flags on the Capitol Complex and commonwealth facilities throughout the state lowered to half-staff at sunrise Friday.

“On Patriot Day, we commemorate the lives lost during the tragic events of September 11, 2001,” said Gov. Wolf. “May their bravery and sacrifice remind us to value our communities and the bonds between every American, and to seek ways to serve one another.”

The United States Flag shall fly at half-staff from sunrise to sunset Friday.

"It begins in Hughesville and will culminate at Mifflinburg's fire station at around 12-1 p.m. Saturday," Walters said.

The route goes along Route 405 through Milton to Route 45 and then to Mifflinburg. People are welcome to join in the walk, Walters said. "As we walk through different fire jurisdictions, we encourage people to walk the whole way with us or a portion of it. As we get closer to Mifflinburg, we usually pick up quite a few people who will walk the last couple of miles."