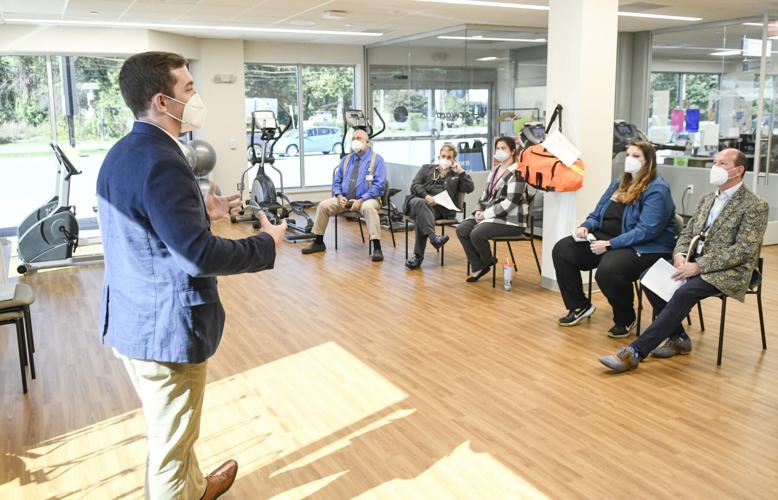 In this file photo from October 2021, Geisinger’s Manager of Military and Veteran Affairs Christopher Grill, left, talks with staff at the Geisinger 65 Forward Health Center in Milton. 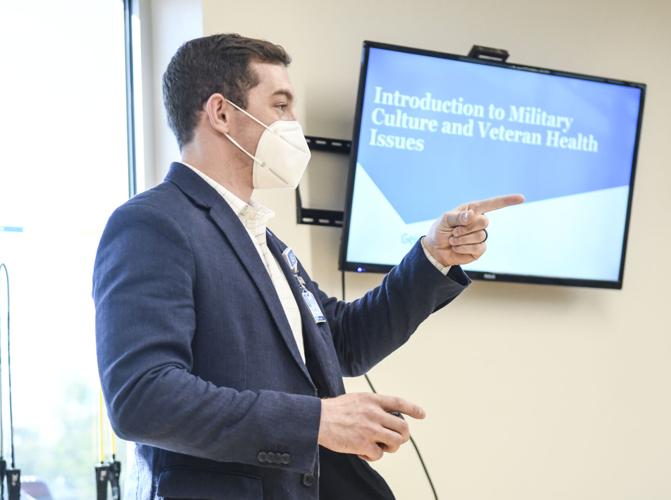 Geisinger’s Manager of Military and Veteran Affairs Christopher Grill talks in October, 2021 with staff at the Geisinger 65 Forward Health Center in Milton. 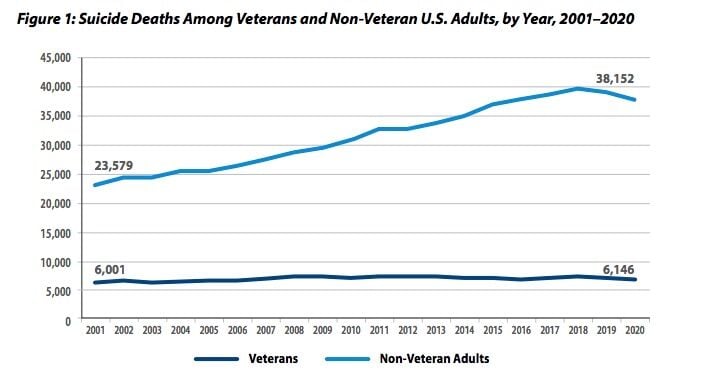 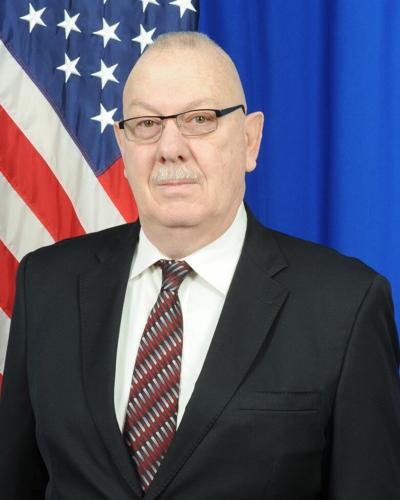 Provided photo Rick Hamp is the special assistant to the deputy adjutant general for the state Department of Military and Veteran Affairs (DMVA) and the state lead for the Governor’s Challenge to Prevent Suicide Among Service Members.

In this file photo from October 2021, Geisinger’s Manager of Military and Veteran Affairs Christopher Grill, left, talks with staff at the Geisinger 65 Forward Health Center in Milton.

Geisinger’s Manager of Military and Veteran Affairs Christopher Grill talks in October, 2021 with staff at the Geisinger 65 Forward Health Center in Milton.

Provided photo Rick Hamp is the special assistant to the deputy adjutant general for the state Department of Military and Veteran Affairs (DMVA) and the state lead for the Governor’s Challenge to Prevent Suicide Among Service Members.

Grill, a U.S. Army veteran who served from 2010 to 2016, frequently talks about how difficult it is for veterans and military service men and women to seek help for mental health services, but it wasn’t until 2021, when he decided to seek those services for himself, that he genuinely understood the talking points from his own training. Grill works with Geisinger’s behavioral health team to present veteran training and education to Geisinger facilities.

“As I’ve been giving this presentation more and more, I thought, ‘Oh man, that’s me. I don’t ask for help,’” said Grill. “I was seeing all the things I talk about in myself.”

Grill sought a mental health referral and ran into some technical issues with scheduling telehealth. He took it as a sign he shouldn’t be seeking help — another talking point from his presentation.

“The stigma, my preconceived notions that went into asking for help took over,” said Grill. “I said, ‘I don’t really need this.’ Finally, I was able to come back around and say, one, I do. and these technical issues are happening to me, maybe they’re happening to other people, maybe I can help solve a problem here.”

Military veterans are 1.5 times more likely to die by suicide than Americans who never served in the military. For female veterans, the risk factor is 2.2 times more likely, according to the state Department of Military and Veteran Affairs.

The U.S. Department of Veterans Affairs’ 2022 National Veteran Suicide Prevention Annual Report, released in September, shows that in 2020, there were 6,146 Veteran suicide deaths, which was 343 fewer than in 2019. The unadjusted rate of suicide in 2020 among U.S. Veterans was 31.7 per 100,000. In 2020, suicide was the 13th leading cause of death among veterans overall, and it was the second leading cause of death among veterans under age 45.

In 2001, veterans between the ages of 35 and 54 had the highest suicide rates, among both veteran men and veteran women, according to the report.

A 2021 study by Brown University’s Watson Institute finds that “at least four times as many active duty personnel and war veterans of post-9/11 conflicts have died of suicide than in combat, as an estimated 30,177 have died by suicide as compared with the 7,057 killed in post-9/11 war operations.”

According to the report, “these high suicide rates are caused by multiple factors, including risks inherent to fighting in any war such as high exposure to trauma, stress, military culture and training, continued access to guns, and the difficulty of reintegrating into civilian life. But the study finds that there are factors unique to the post-9/11 era, including a huge increase in exposure to improvised explosive devices (IEDs), an attendant rise in traumatic brain injuries (TBIs), and modern medical advances that have allowed service members to survive these and other physical traumas and return to the front lines in multiple deployments. The combination of multiple traumatic exposures, chronic pain, and lasting physical wounds is linked to suicidal behaviors.”

Rick Hamp, special assistant to the deputy adjutant general for the state Department of Military and Veteran Affairs (DMVA) and the state lead for the Governor’s Challenge to Prevent Suicide Among Service Members, Veterans, and their Families, said one in 10 veterans have been diagnosed with substance abuse disorder.

“A person dealing with addiction typically has trouble holding employment, trouble maintaining relationships, challenges in day-to-day life and social norms,” said Hamp, who served 32 years in the United States Army. “If not corrected, this often leads to homelessness and unemployment, and, very quickly, to depression and suicidal ideations, and then we’re dealing with someone who statistically could die by suicide. It’s never one thing that occurs that can cause a person to take their own life. It’s a combination of things. You can see how that pattern leads to that feeling of depression and loneliness, and not being connected to anything.”

Hamp touts The U.S Department of Veterans Affairs (VA) program called the President’s Roadmap to Empower Veterans and End a National Tragedy of Suicide (PREVENTS), as one of the reasons for the declining suicide rates. PREVENTS, launched in 2020 by President Trump, is considered an historic nationwide plan to raise awareness about mental health, connect veterans and others at risk of suicide to federal and local resources, and facilitate focused and coordinated research into suicide.

“Pennsylvania was an anomaly for a few years, with suicide rates higher than the general population,” said Hamp. “We stood out. We’re very happy to see this number going down. It’s important to understand what the data means. We need data to make informed decisions and to build programs that will combat the incidents of suicide. We think we’ve seen some success there.”

The roadmap is the result of an executive order President Trump signed March 5, 2019, calling on the Departments of Veterans Affairs, Defense, Health and Human Services and several others to develop a comprehensive strategy for ending the national tragedy of suicide. The PREVENTS Task Force launched a nationwide public health campaign aimed at educating Americans that suicide is preventable, creating awareness of mental health and suicide prevention best practices with a call to action for all Americans to take the PREVENTS Pledge to Prevent Suicide.

A primary goal of the campaign is to change the culture surrounding issues related to suicide and mental health. The campaign was intended to stress everyone has a role to play in the well-being of family members, friends and coworkers. It was intended to create awareness about risk and protective factors and encourage people to reach out to those who may be struggling.

“Suicide is a public health issue,” said Hamp. “It doesn’t discriminate. It’s a leading cause of death among all Americans, not just veterans. Veterans as a demographic tend to be a little higher than the non-veteran population. Education, outreach and making connections with each other, resources, and hope is causing that number to go down. We thought we would see incidents of suicide go up during the pandemic, but that didn’t happen. The numbers went down.”

June Gallegos Moser, the director of the U.S. Department of Veteran’s Affairs Vet Center in Williamsport, said a veteran experiences a military culture that is different than any other. The Vet Center offers confidential help for veterans, service members, and their families at no cost in a non-medical setting.

“This provides for many unique factors that may be involved with their mental health,” said Moser. “Here at the Vet Center, we primarily counsel veterans that may be struggling with readjustment from civilian to military back to civilian lifestyle. Also, those that have experienced trauma as a result of multiple reasons, including war. We counsel veterans that may have various emotions as a result of their unique situations; anxiety, depression, confusion of what they are feeling, et cetera.”

The Vet Center’s services include counseling for needs such as transitioning after a deployment or discharge from military service, depression, post-traumatic stress disorder (PTSD), and the psychological effects of military sexual trauma (MST). They can also connect a veteran with more support in VA and the veteran’s community.

Mental health counseling may be difficult, particularly when trauma is involved, said Moser.

“Many people, veterans included, do not want to bring up difficult situations that they have been avoiding, due to the distress it causes,” she said. “This is understandable but trauma does not go away because you avoid thinking about it. It may take many different forms such as anxiety, depression, irritability, anger to name a few. There is a light at the end of trauma therapy. It does get better.”

Barriers may include their own expectations that they should be able to understand what it is they are feeling that is causing distress, said Moser.

“Research studies show that once a veteran returns from war, it may take up to five years before they realize they may need assistance, in processing the multiple experiences and changes over a relatively short period of time, in their life.” she said. “Also, unfortunately, another barrier that remains is the stigma of mental health counseling. Many still believe that you should ‘tough it out’ and that if you get counseling that there is something ‘wrong’ with you or you are ‘weak.’ This could not be further from the truth. It takes courage, willpower and self-discipline to address your most hurtful emotions. Recognizing and seeking assistance is admirable.”

The Williamsport Vet Center has qualified, licensed mental health counselors that are well versed in evidenced-based therapies, that have proven to be effective, said Moser.

“Our population is primarily those that have suffered trauma and/or having readjustment issues,” she said. “We provide services in the form of individual psychotherapy, group sessions, marital/couples counseling, and a multitude of opportunities for veterans to engage, with other veterans and families. We have a Guitar Group, several Art Groups, Spouse/S.O Support Groups and always looking for establishing other groups that our veterans may be interested in. Our eligibility has been veterans that have deployed into a war zone, bereavement and a host of other qualifiers that have recently expanded eligibility. We also have multiple events throughout the year to honor veterans and their families.”

Hamp said the unique culture of military life can also lend to the idea of seeking help.

Transition to civilian life is never easy, he said.

“To a fellow veteran, I would say check your buddy,” said Hamp. “Just remember that guy to your left and your right. We always say ‘take a knee, drink water, check your buddy.’ Trust you buddy. If you’re not feeling well, reach out to that buddy. Don’t hesitate to reach out.”

Dick Simpson, a U.S. Navy veteran who served in active duty between 1965 and 1967 and has been a past commander of both the American Legion Post 44 in Northumberland and Legion District 14, started working as a funeral director in 1973. He said he saw several suicides of veterans over the years.

“Unfortunately, my experience has been at the bitter end,” said Simpson. “I saw some veterans who had served in Vietnam, some in Iraq. When I worked in Carlisle, there was a Vietnam vet who refused to go for professional help. They found him hanging in his house.”

Pride and shame are big hurdles to overcome, said Simpson.

“They don’t want to admit it’s a problem,” said Simpson. “That’s unfortunate because so many of these fellows and girls go through it.”

Simpson said he never experienced any mental health issues related to his military service but noted he had a mental breakdown at one point in his life. His father spotted the warning signs and he sought help. He encourages anyone needing professional help to get it.

988 then press 1 for Veteran Crisis Hotline