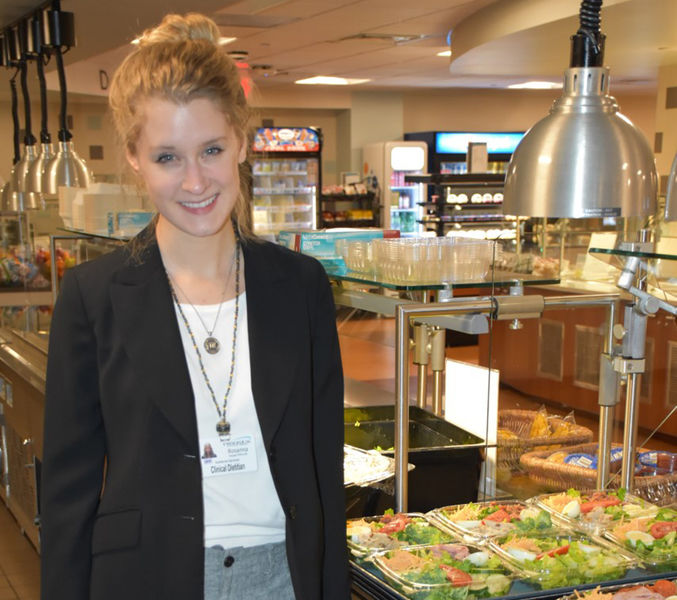 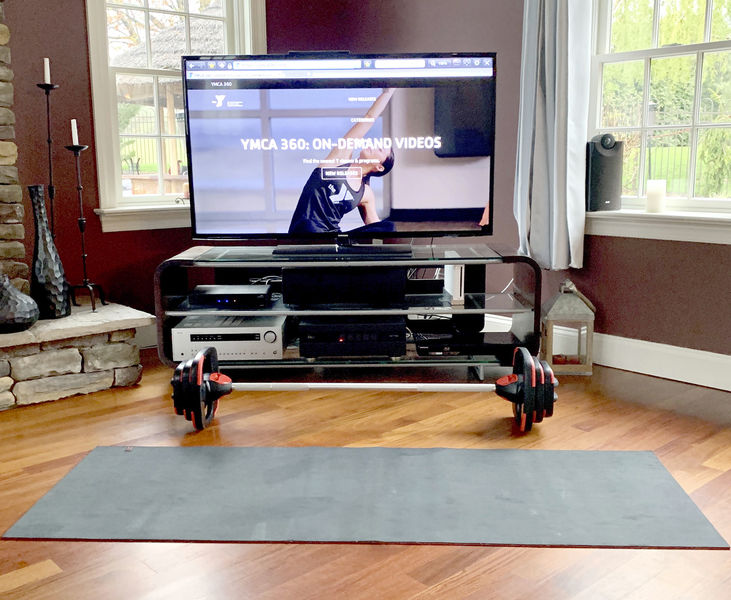 Exercise during the pandemic can include walking, bike riding or participating in virtual workouts available through programs such as the YMCA 360 – available for children to adults, beginner to advanced. 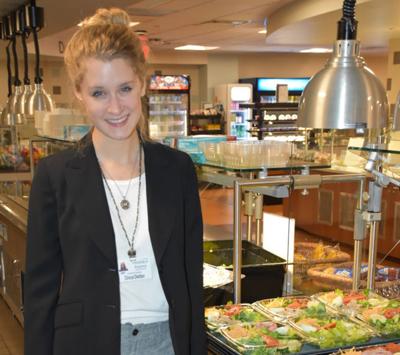 Exercise during the pandemic can include walking, bike riding or participating in virtual workouts available through programs such as the YMCA 360 – available for children to adults, beginner to advanced.

For the past 10 years, the YMCA has been a major part of life for one Valley family. Nicole Spontarelli said her children — Preston, 14, and Olivia, 13, — have participated in football and field hockey clinics, respectively. Olivia recently began attending group fitness classes with her mother, and Preston has found mentors to train him in the weight room as he prepares for the upcoming football season.

But when the COVID-19 shutdowns began, their 5- to 6-day-a-week routines at the YMCA abruptly stopped.

“Since the temporary closure of the Y, we went through some sort of withdrawal,” Spontarelli said. “We miss seeing our friends who became like a second family. We miss the feeling of accomplishment, that feeling of pushing yourself to the limits.

“We got stuck in a rut for a while,” she admits, “binge-watching shows and the kids playing online games with their friends.”

“Nothing undermines a good habit like the combination of stress and a change in routine,” she said, adding, “Understandably, a lack of structure and motivation may lead to mindless eating, lethargy and extended periods of immobility. This may ultimately lead to a state of increased inflammation, a decreased immune system, the flair up of underlying health conditions, a loss of lean body mass, fat gain, and ultimately, physical and emotional stress.”

But she soon realized they needed to change their habits and get active again. So now, each day they go on a two-mile run together with their dogs, followed by lifting weights together. In addition, Preston and Olivia will go outside to play football, and Olivia will even teach her brother some field hockey techniques she learned at the clinics.

Spontarelli, now working from home, spends her lunch hour with an on-demand LES MILLS program the Y is offering to its members.

“They have so many programs to choose from,” she said. “A little something for everyone with modification options if needed.”

Many families like the Spontarellis are finding ways to eat healthily and stay active during this time of quarantine and new routines. From long walks and bike rides to finding fresh produce and curbing their cravings for constant unhealthy snacking, many are realizing the benefits, both physical and mental, amidst this uncertain and stressful time.

No one will argue that a healthy lifestyle is hard enough in normal times, and that adjusting to a new normal as this pandemic has ushered in, makes it even more difficult.

Not only are gyms closed, but people also have to be wary these days even going to public parks and trails for some fresh air and exercise, due to strict social distancing and mask-wearing guidelines.

“A lot of folks are leery about going to the grocery store, or they minimize how often they are going to the grocery store,” he said. “Even buying fresh produce – either the supply hasn’t been there or people aren’t looking to get out and get some of that. Local farmer’s markets are shut down. Folks are tapping into their freezers, and eating processed meals in an attempt to save money and trips out to the stores.”

With the closure of all fitness centers, accountability that is crucial to sticking to a workout plan is often lost, added Melanie Garrison, Group Exercise Coordinator at the Greater Susquehanna Valley YMCA.

“For many that go to the Y, there is the social component that is just as important as staying healthy,” she said. “I am finding that many people are lacking motivation with having to work out on their own. Many do not know where to begin or what to do on their own.”

Dinko added that a consistently unhealthy diet and lack of exercise increases the risk for obesity, heart disease, lung disease and diabetes, to mention a few.

That’s why it’s even more important than ever to come up with a plan and commit to it.

“Now is as good a time as any to start that new behavior,” Dinko said, adding that it typically takes a month or longer of regular or semi-regular activity to develop a routine that “doesn’t feel like so much of a chore.”

Dinko encourages people to “fill the extra time with small, positive changes you can make.”

“Reasonable goals,” he said. “Start small and build off of that.”

For example, if someone is currently drinking six cans of soda a day, make it a goal to cut down to four and replace the other two with something healthier. If you are currently not exercising at all, start with two, 15-minute walks a week, and slowly increase that as they become a routine.

“Any improvements that can be made, even the smallest ones," he said. “Over time, you will see benefits and change.”

“It takes some time to tune into your body,” she said. “We often feel a sense of hunger when our bodies and spirits need a change, though relabel that ‘hunger’ for the word ‘longing’. Now ask yourself, ‘What am I longing for?’ A walk? Some sun? A tall glass of ice water? Time to unplug from the technology or from the news? Time to meditate? A good heart-to-heart conversation with a friend? Some exercise?”

Even a big bowl of ice cream is ok occasionally, she said, but “Try out one of these options before running to the kitchen.”

If you do find yourself overeating, she recommends taking away other stimuli such as work, television, phone, and even anxious thoughts, and to fill up your plate with fiber that’s found in vegetables, fruits, whole grains, legumes and beans. These help you to feel full, and as a bonus, they contain anti-inflammatory antioxidants and heart-healthy fats.

But even if you do have that longing for potato chips or the like, Dinko said instead of keeping the whole bag nearby, you can fill up a small container with “how much you’re willing to allow yourself to eat, then put them back.” And, he added, “Make sure you don’t go back and refill that bowl.”

“Everyone needs to keep moving,” Garrison said, adding that a routine, with respect to social distancing and stay-at-home guidelines, can include walking, bike riding or participating in virtual workouts available through programs such as the YMCA 360 – available for children to adults, beginner to advanced.

Dinko also suggests taking advantage of free applications, which can include workouts to do at home and even help with calorie counting. The American Heart Association, he said, recommends 30 minutes of moderate-paced walking each day, and getting outside is always a good idea.

But activity doesn’t have to be viewed as a formal workout.

“Spending time in the sun walking, chasing your dog, children or grandchildren, gardening, or simple stretching is a three-for-one mental, emotional and physical health special!” Haupert said, adding, “Spring cleaning, rearranging or reorganizing your house is a great way to get your body moving and get that nagging ‘to-do list’ done."

Tonya Hatter, 37, of Selinsgrove, had been attending group exercise classes at the Sunbury YMCA, but the shutdowns pushed her to find ways to exercise at home – “which has never been successful for me in the past,” she admits, due to a lack of motivation and social interactions.

She has been committed to doing workouts she has found online and staying active with family outings like bike riding. Her goal is to work out five days a week, and she is also trying to eat more natural, and less processed, foods.

“It is my self-care during this time,” she said, “and it also has helped my mood and energy levels.”

During this time of uncertainty, that is an even more attractive reason to take care of yourself.

“Without a doubt, exercise for those who do have underlying stress, anxiety or depression, has shown to be extremely beneficial,” Dinko said. The release of endorphins increases the mood, and “you can put that anxious energy into something more positive.”

Added Haupert, “Taking the time to create a new daily routine, to re-awaken your inner health coach, or to start one or two new healthful daily activities, will lead to decreased inflammation, a more resilient immune system, and better self-efficacy, which is the confidence in one’s ability to complete a task, and ultimately the hope to make it through a hard situation.”

As we move to a “new normal,” Garrison said, it’s important to prepare your mind and body for the challenges ahead through proper maintenance, which reduces stress.

But don’t allow the need for a proper diet and exercise become another source of anxiety.

“Ultimately, know that grace and rest are essential to wellness,” Haupert said. It’s okay to take time to adjust to a new routine, and to take it slow.

“When you are ready, commit to small, healthy practices, and your favorite activity-centered activities. Commit to media and art that inspires and invigorates your mind, foods that give you vitality and energy, and to relationships that bring you rest.

“We will make it through!”