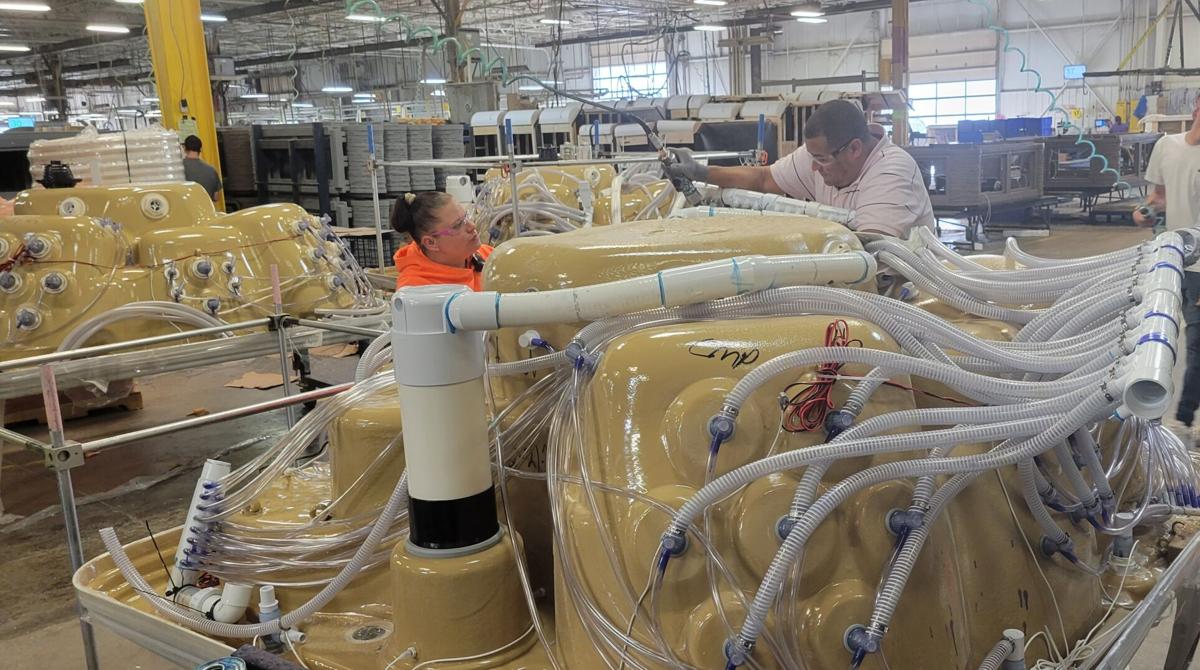 Jen Hale and Luis Bareto Marte, employees at Strong Industries, work on spas on Friday at the Northumberland plant.

Strong Industries, located outside Northumberland, is adding a second plant in Danville.

Jen Hale and Luis Bareto Marte, employees at Strong Industries, work on spas on Friday at the Northumberland plant.

Strong Industries, located outside Northumberland, is adding a second plant in Danville.

NORTHUMBERLAND — A second Strong Industries plant that will bring 300 jobs to the area is expected to be completed by early next year.

Meanwhile, the leaders at the spa manufacturing plant at 3204 Point Township Drive outside Northumberland said they have been promoting a positive work environment to attract and keep potential employees as well as fostering a workplace of diversity and inclusion. Strong Spas is one of the largest manufacturers in the world, and one of the few hot tub manufacturers with plant operations in the U.S.A., the leaders said.

The new plant is being set up inside the former National Ticket building in the Danville Industrial Court. The property is on the south side of the railroad tracks.

“That is in the process of being fabricated to manufacture similar products in this (Northumberland) facility,” said Tim Lust, director of manufacturing. “With COVID delays, we’re looking to have operations in the first quarter of 2022. We’ll start hiring and training in this facility and then we’ll shift that staffing there (Danville).”

Supply chain issues and contractor delays have pushed back the original finishing date, they said.

The new plant will have new production innovations, including two robots that will spray tubs and drill products, that will be able to produce 100 units a day. The current plant will also be retrofitted with new technology as well, Lust said.

“People are not spending their money to travel as much as they were,” said Greiner. “They’re investing in their homes. There’s a lot of people remodeling.”

Strong Spas is involving itself more in the Danville community in preparation for the opening. They participated in the Halloween parade in Danville and collected 990 pounds of food to donate to the Danville Food Bank, said Renee Walburn, director of human resources.

Greiner said Strong has worked to create an environment where people see themselves as being successful and where diverse people with talent can grow. The company helps provide a clear path for growth by encouraging leadership and growth, as well as helping to pay for training and education, including English as a Second Language or General Education Degrees. Each employee can contribute and bring ideas to the management as well, he said.

“We are a Strong family,” said Walburn. “There’s different levels of education, socioeconomic backgrounds, everybody working in the same departments and having a voice and being equal.”

Diversity could mean race, sex, gender, age, class, background. It can be a single mother, a person in recovery or someone with a criminal background, they said.

“To us, diversity means I have a unique experience in the world and a different viewpoint,” said Greiner. “People see themselves here.”

Walburn said the opportunities are spread by word of mouth and a heavy social media presence. Employee achievements from promotions to marriages to the birth of children are celebrated publically on Facebook. Employees are used in commercials. Events are highlighted, she said.

“We want to be seen as far as television, internet, social media, mailers,” she said. “Everywhere you look for employment, Strong is there. It’s overall branding, getting involved in the community.”

Strong is also involved with the Danville Area High School in the “What’s So Cool About Manufacturing” program. They work with high school students to show them what happens at the plant and the students make a video for a statewide competition, said Lust.

Walburn, who started in January, said she built an HR team and found key players. Prior to this, she said Strong was struggling with employee retention like every other business.

Strong also has a weekly bonus program for employees. If employees show up for work every day on time and have no disciplinary violations, they receive a $3 an hour bonus, said Walburn.

Tea Jay Aikey, president and CEO of the Central Chamber of Commerce, said she and other Chamber leaders toured the Northumberland plant in October. She said Strong is a great example of a positive company in the Valley.

“Coming from a manufacturing background, it was a really great thing to experience,” said Aikey. “It was such a great feeling. It’s just remarkable what they have done.”

Aikey said Strong in the past has had a reputation of being a “rough place to work,” but that old idea is gone.

Management has implemented many practices to make workflow better and make it easier for employees to accomplish their goals, she said.

“There’s so many different cultures represented there,” she said. “They are an employer who embraces second chance. They don’t shy away from that.”

Aikey said she is looking forward to seeing the new plant open.

Strong joined the chamber in early 2021.