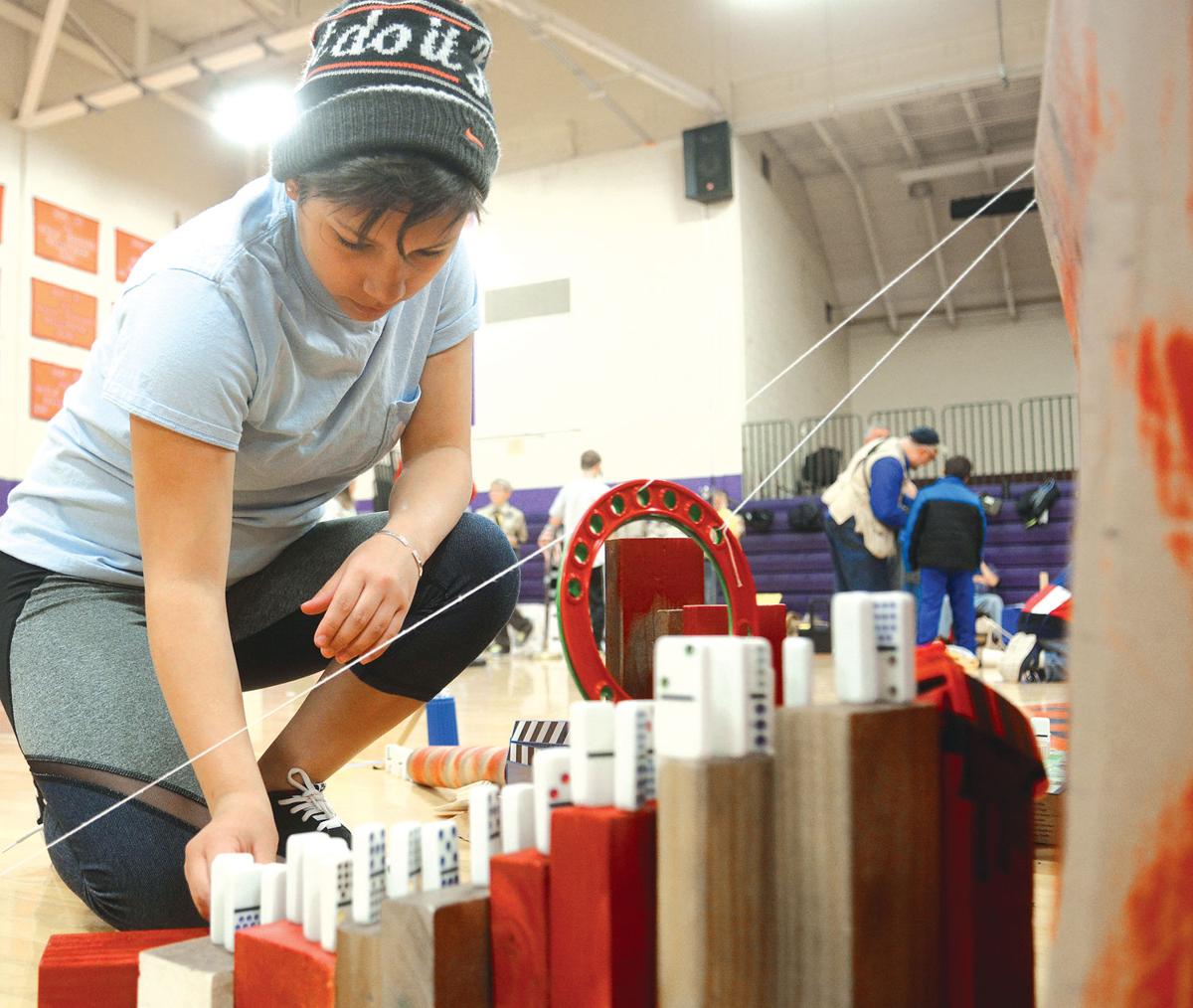 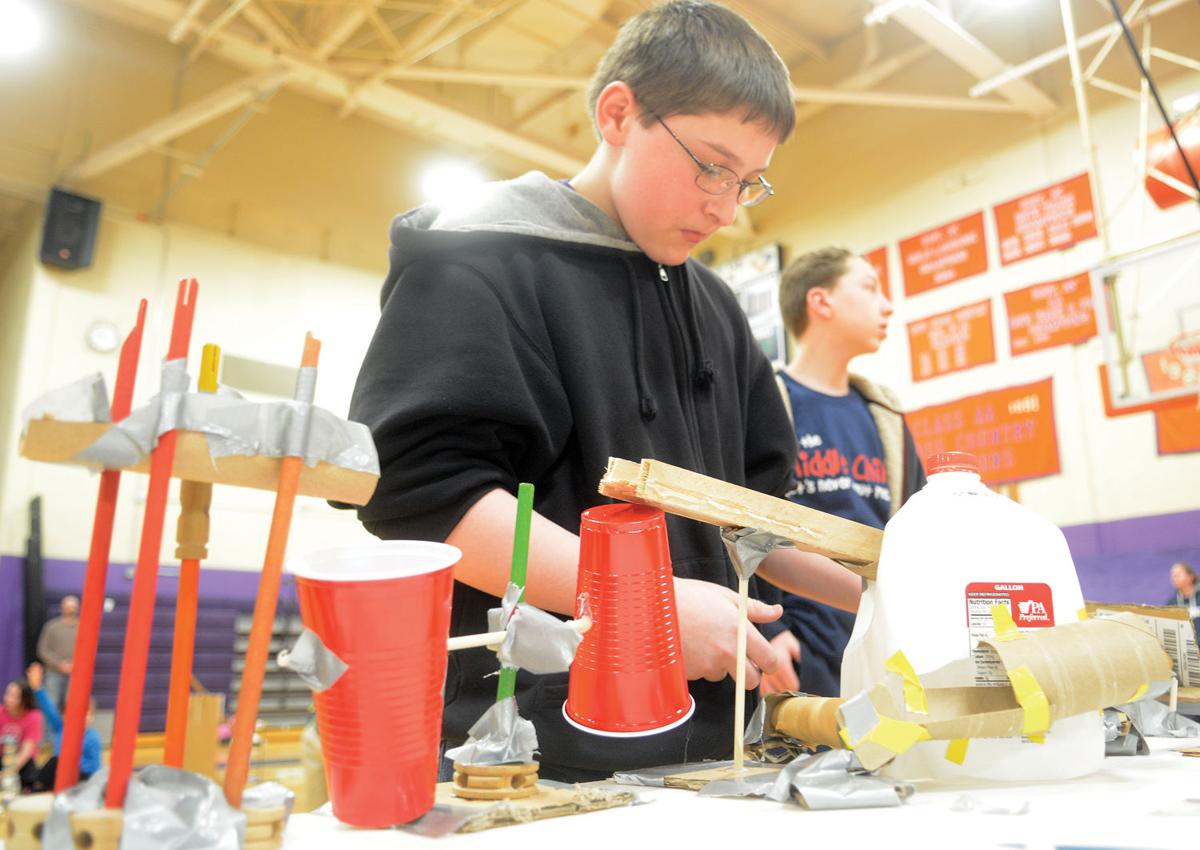 Aaron Wright, of the Danville Middle School team, puts the finishing touches on his team's machine during the Rube Goldberg Challenge on Saturday inside the Danville Area High School. 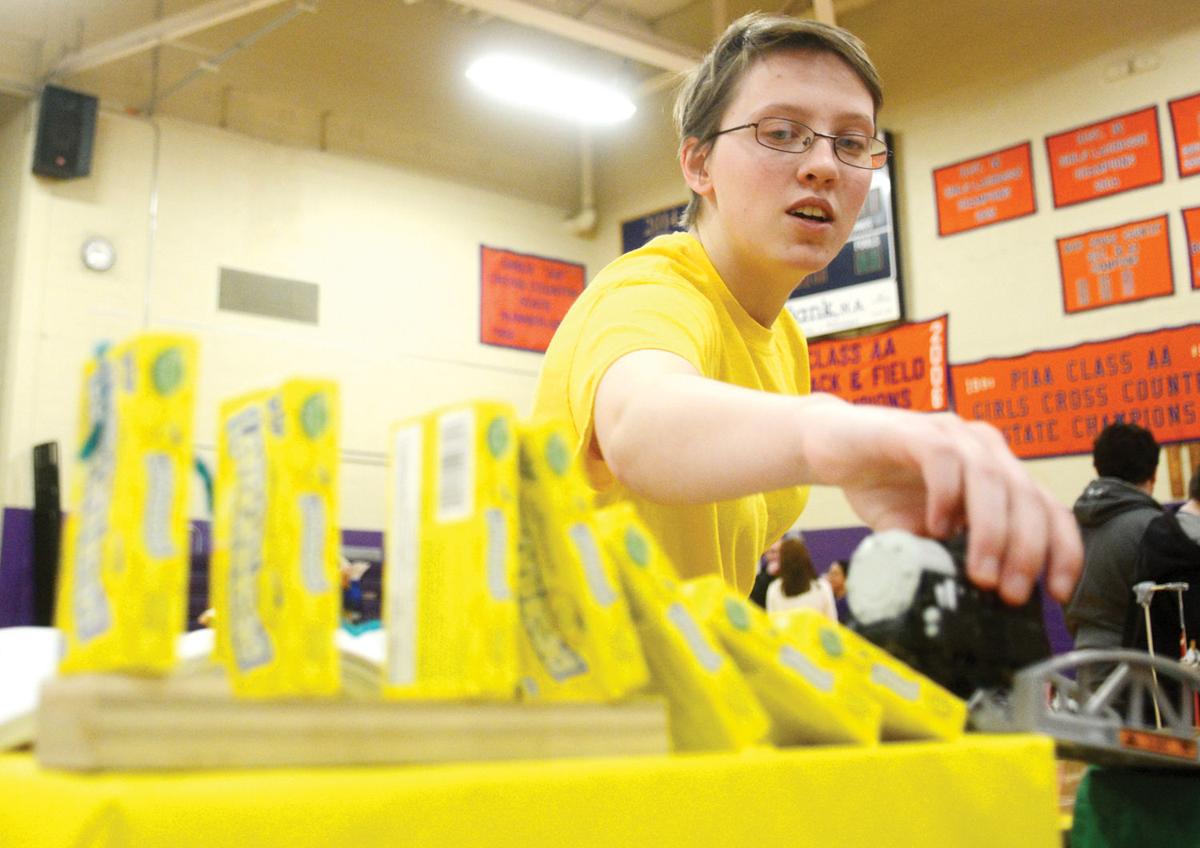 Emma Beiter, of the Danvilel Area High School team, stops a train before it prematurely sets off her team's Rube Goldberg machine on Saturday. 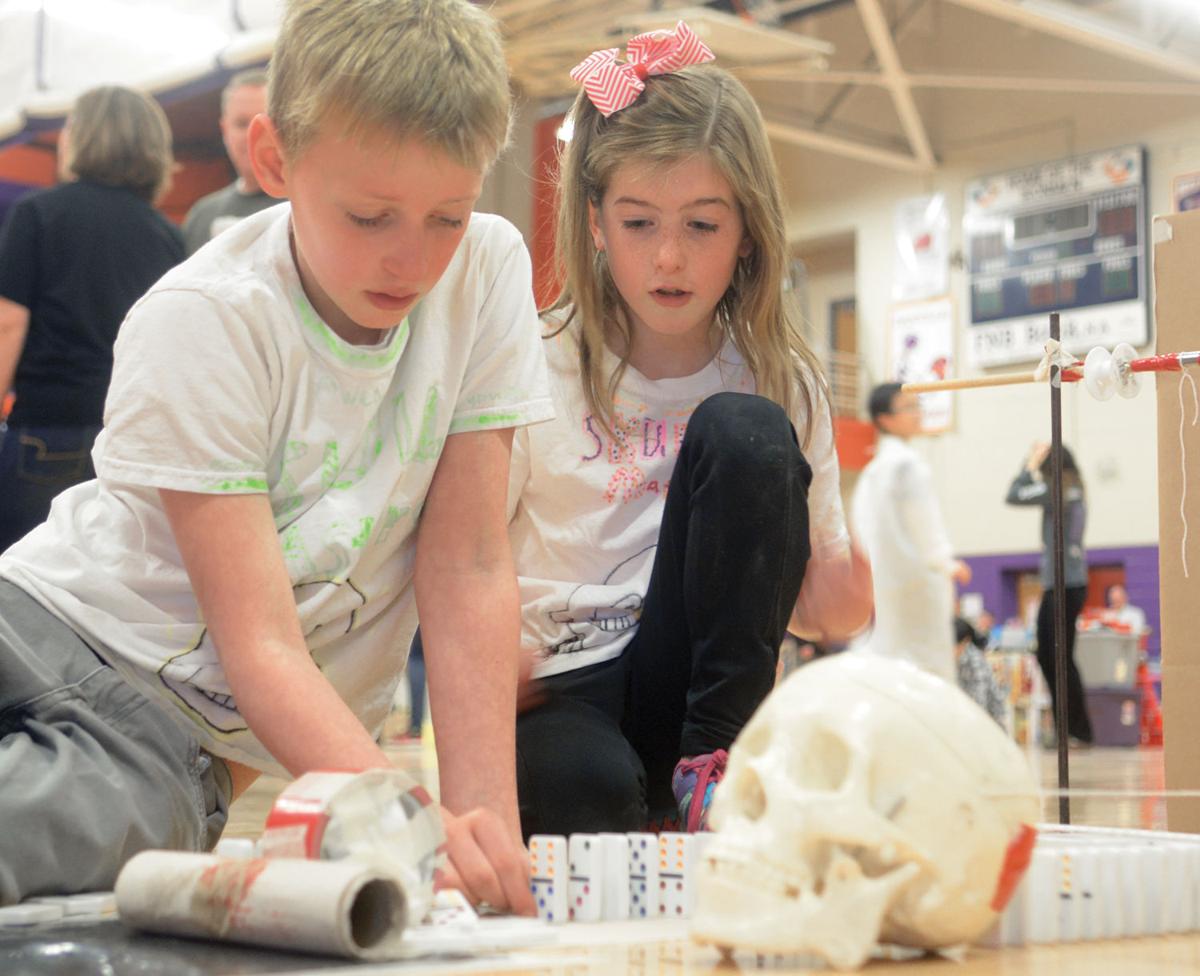 Aaron Wright, of the Danville Middle School team, puts the finishing touches on his team's machine during the Rube Goldberg Challenge on Saturday inside the Danville Area High School.

Emma Beiter, of the Danvilel Area High School team, stops a train before it prematurely sets off her team's Rube Goldberg machine on Saturday.

For the E-Lemon-Ators of Danville Area High School, one of 14 teams to compete in Saturday’s Rube Goldberg Challenge, it’s an 18-step process utilizing simple machines like inclines and levers in conjunction with a toy pig, plastic roller-coaster track and a battery-powered train.

"It starts with the car on the track," said Elizabeth Henning, a sophomore at Danville High, before nudging it down a curvy course, setting off a chain reaction using marbles and balloons and a pulley.

The Rube Goldberg Challenge tasks students, elementary-aged through high school, to engineer a complicated machine to perform a simple task. It’s modeled off the artwork of the iconic turn-of-the-20th-century cartoonist of the same name. Think of the board game "Mousetrap" or the "truffle shuffle" scene from the 1985 classic film "The Goonies."

It’s a STEAM assignment, incorporating the arts with science, technology, engineering and mathematics. Boys and girls team in groups of up to four members — 48 students in all on Saturday.

They work about one month creating unique machines in the buildup to the showcase, organized by the Columbia-Montour Council of the Boy Scouts of America. Students draw a diagram of the machine’s function, write a report and give an oral presentation before setting their contraption into motion as contest judges, fellow competitors and family look on.

Anne Poler, a member of the event committee, said the Challenge teaches methods of experimental procedure steeped in creativity, patience and basic physics.

"If this angle doesn’t work, angling it another way might work," Poler said, mimicking the thought processes of the young inventors.

Peter Engstrom, a contest judge, said he looks for creativity blended with complexity in function and design. Judge Erik Valentino was excited to see how teams were incorporating sand, electronic devices and wet paper towels.

"We’re gonna have to raise the bar next year," Engstrom said of the 12-step minimum for the high-schoolers.

"A ball will roll into a cup which works as a pulley, which will drop down," the fourth-grader said as her twin sister, Victoria, and team member Owen Crane looked on.

From there, a book is knocked to the ground, pulling back a strung tied on a model human skull and causing a chain reaction of dominoes to fall after being pushed by a lever. The final domino tumbles into a cardboard tube, unraveling a paper towel with a message on it: "Have a nice day." The towel then soaks up water droplets, which is the end task. All of which is to say it’s a very complex design to clean up a tiny spill.

Sonia Crane, Owen’s mother, says the Challenge teaches students trial and error, and how to handle frustration when met with failure. They experiment in science and refine writing skills, sure, but they’re also taught resolve.

"Life doesn’t always work out the way you want it," she said.

Back at the E-Lemon-Ators’ invention, marbles are rolling, books are falling and a toy train plows through a series of seven boxes for the Lemonhead candy, the last one falling and tugging a string attached to a book page.

The page turns over.

"And it worked for once!" Emma Beiter exclaimed.