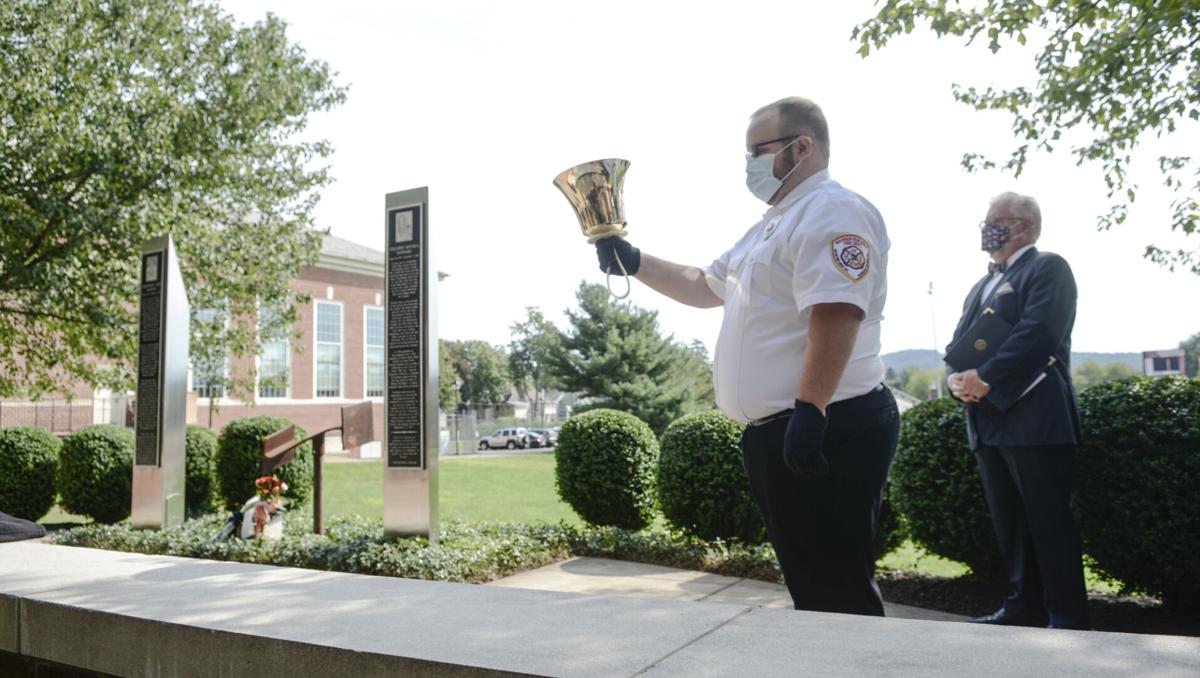 Jonathan Moser, Susquehanna University class of 2022 and Warrior Run volunteer firefighter, rings a bell as president Jonathan Green looks on during the university’s 9/11 memorial to mark a moment of silence during ceremony commemorating the 20th anniversary of the Sept. 11, 2001 attacks on Saturday. 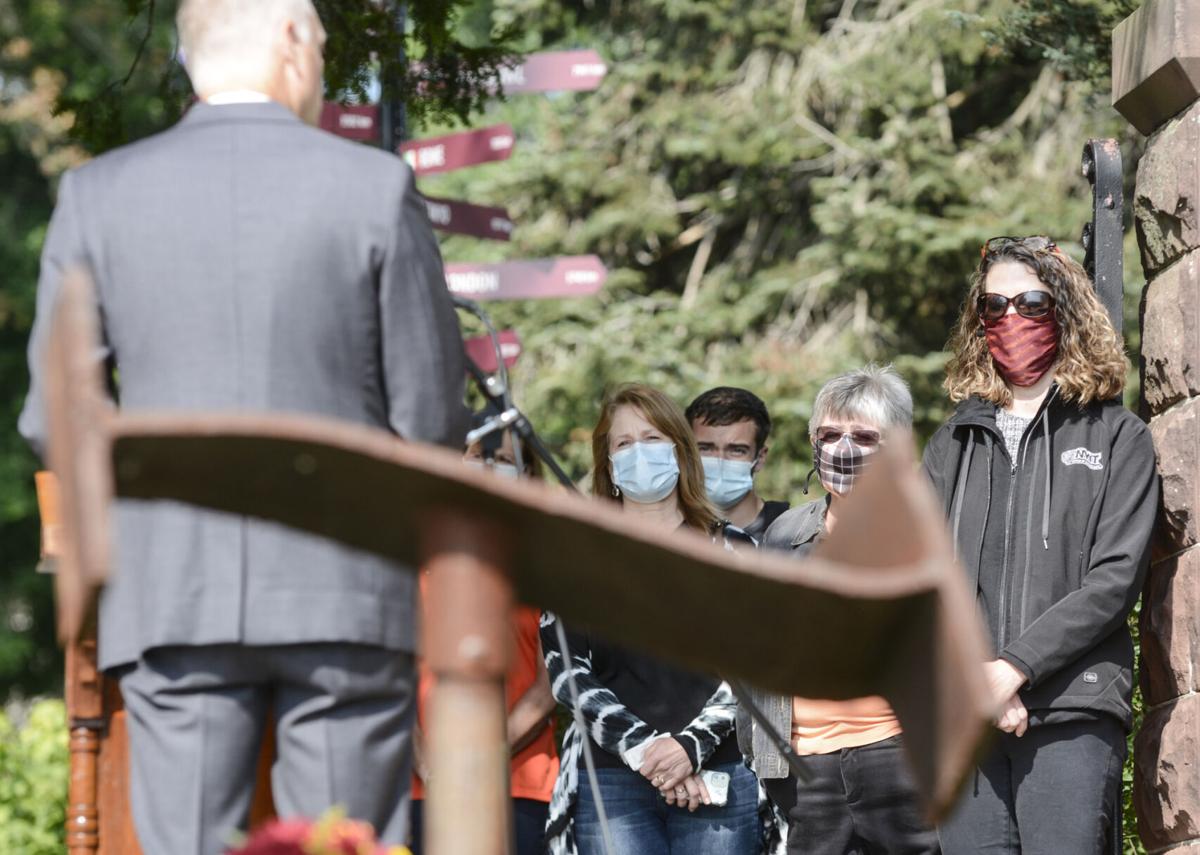 A small crowd of people marked the 20th anniversary of the Sept. 11 attacks with a ceremony on Saturday at Susquehanna University. 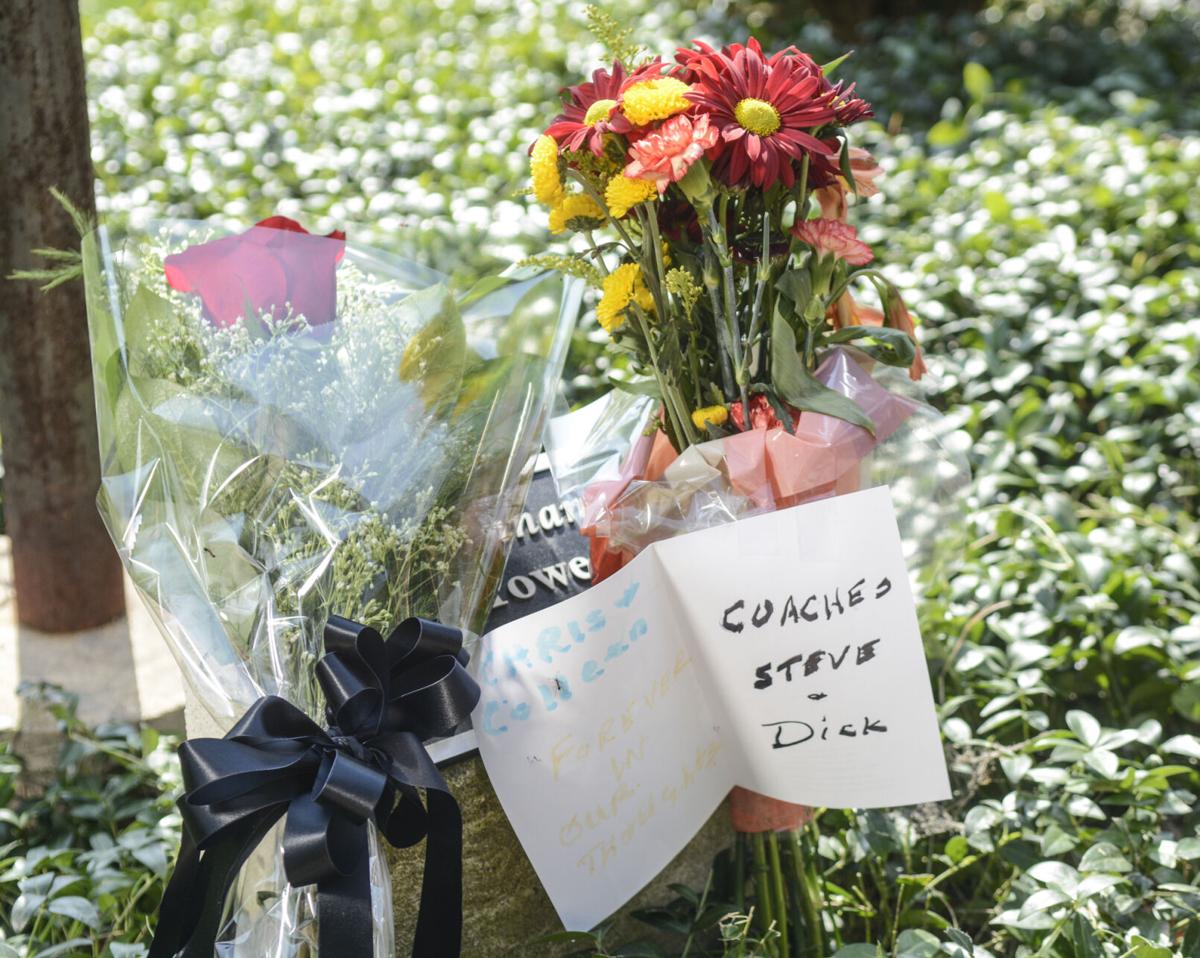 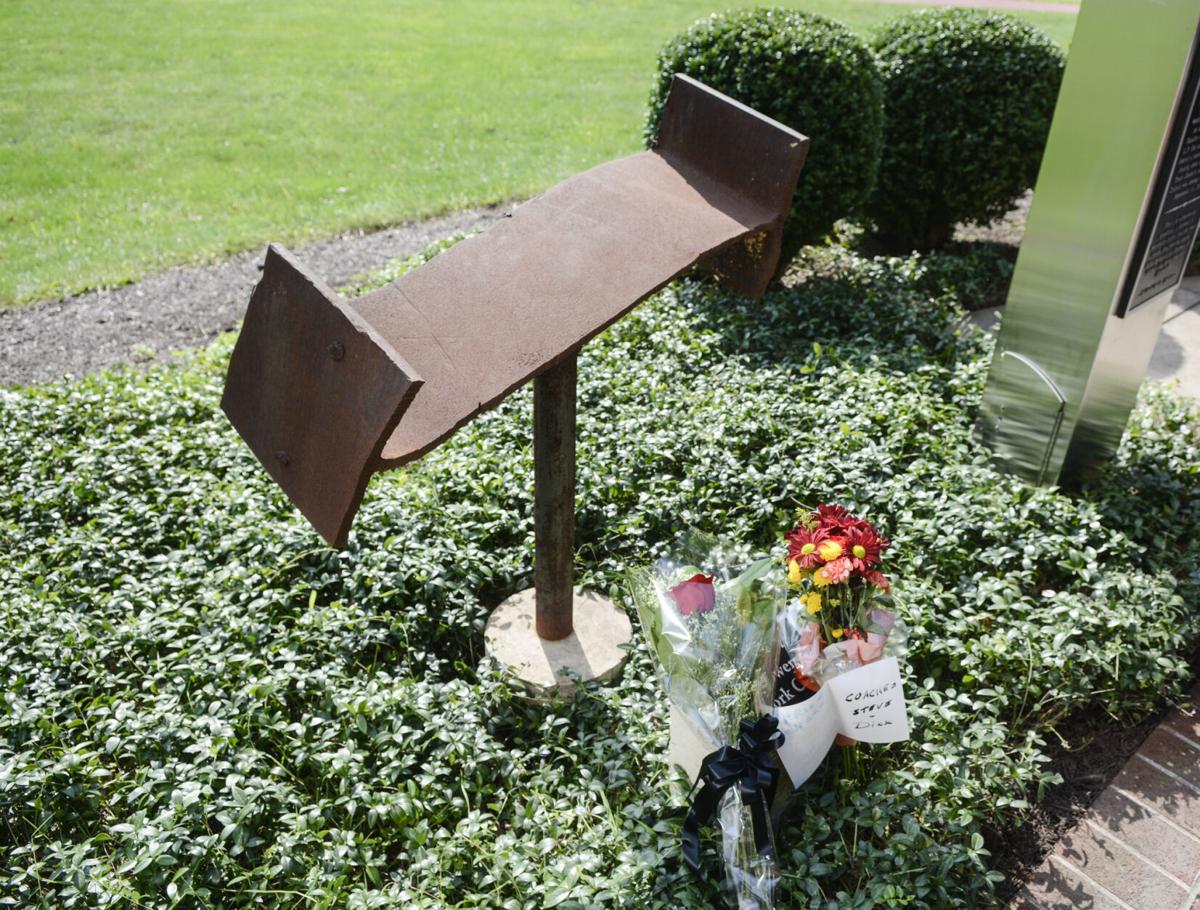 Jonathan Moser, Susquehanna University class of 2022 and Warrior Run volunteer firefighter, rings a bell as president Jonathan Green looks on during the university’s 9/11 memorial to mark a moment of silence during ceremony commemorating the 20th anniversary of the Sept. 11, 2001 attacks on Saturday.

A small crowd of people marked the 20th anniversary of the Sept. 11 attacks with a ceremony on Saturday at Susquehanna University.

Susquehanna University held a brief service to honor two alumni who died in the terrorist attacks against the United States on Sept. 11, 2001.

For the 20th anniversary of the attacks, the Rev. Scott M. Kershner honored Chris Vialonga, Class of ‘93, and Colleen Supinski, Class of ‘96, along with all of those lost on the morning of Sept. 11, 2001.

“Today, we remember Colleen and Chris and all who were killed that day,” said Rev. Kershner at the ceremony. “We pause to honor the sacredness of human life, to remember to reflect and to recommit ourselves to the daily work of making the world a better place.”

Supinski was an associate trader for Sandler O’Neill & Partners on the 104th floor of the South Tower, and Vialonga worked as a foreign exchange trader for Carr Futures on the 92nd floor of the North Tower.

The university’s 9/11 memorial sits over the football stadium and track to honor both alumni’s time as student-athletes for Susquehanna. Supinski was a member of the women’s track and cross-country teams and belonged to the Kappa Delta sorority. Vialonga was an offensive lineman on the football team, contributing to the 1991 South Region Championship group’s run to the National Division III semifinals.

After the service, Kershner said they hold this ceremony every year so that no one, particularly the generation too young to remember that day, forgets what happened.

“We want to be part of building a world where events like this don’t happen, and part of that is remembering and then recommitting ourselves to making the world,” Kershner said.

Susquehanna University President Jonathan Green also spoke at the event, agreeing with Kershner. He said that younger generations, without a personal connection to the events of 9/11, can still learn valuable lessons from the attacks.

“As we memorialize the victims of the September 11, attacks 20 years later, it is not part of the memory of our students, but their lives have certainly been shaped in the shadows of those tragic events. Even the recent tragedies in Afghanistan are echoes of 9/11,” said Green.

After the ceremony, Green said that the university has plans across its curriculum to educate its students about the events of 9/11.

Jonathan Moser, Class of 2022, was invited to speak toward the end of the ceremony.

He said that by serving as a third-generation volunteer firefighter, he can relate to the feelings and emotions held by many. During a late-night call once, a family friend of Moser’s was severely injured while responding to a bonfire in his hometown.

“The result of his injury changed his life forever and left him paralyzed from the waist down,” said Moser.

“The impact that had on the community was tremendous. There was grief,” continued Moser. “But the camaraderie outweighed the bad of the situation.”

Moser spoke of the community rallying to aid the injured fireman by building accessibility ramps in his home.

He linked this concept of community and compassion to the culture across the country following the attacks on New York, Washington, D.C., and Pennsylvania.

“The resilience of this nation in the days following is unlike anything else I have learned about. We have found ways to look into the lives of those who died that day, and have been carrying them with us every single day,” said Moser. “Our ability to pick up the pieces and rebuild has proven our strength and our courage. Our hope and beginning again, even 20 years later with all of the events in this world, remind me just how much an event as tragic as this has ways of bringing people back together.”