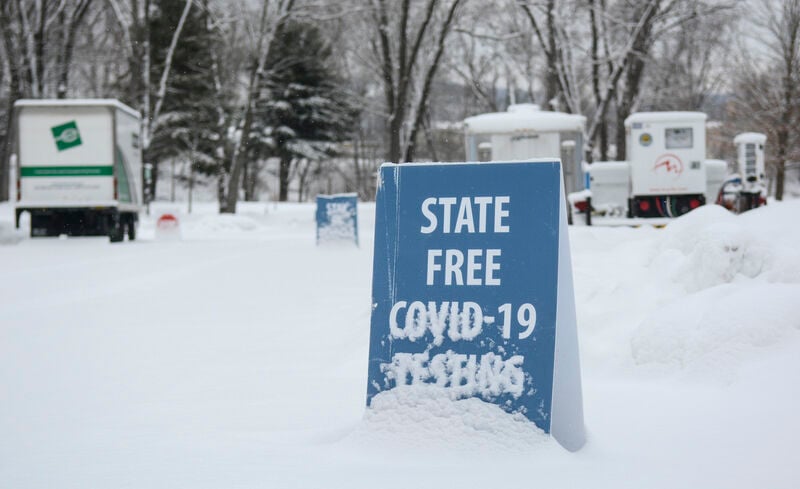 Robert Inglis/The Daily Item The free COVID-19 testing site at the Shikellamy State Park got snowed out on Monday.

Robert Inglis/The Daily Item The free COVID-19 testing site at the Shikellamy State Park got snowed out on Monday.

State officials will not add another day onto the drive-thru COVID-19 test site at the Shikellamy State Park after Monday's round of tests was canceled due to bad weather.

Monday's hours were called off Sunday night ahead of Monday's quick-moving storm. The site will reopen this morning and be open daily from 8 a.m. to 6 p.m. through Thursday.

Department of Health (DOH) Public Information Officer Amber Leggett said due to constraints on moving the program's schedule along, an additional day will not be added to the end of the schedule, consistent with other weather-related closures.

The Northumberland County EMA is working with the state Department of Health and AMI Expeditionary Healthcare (AMI) to set up the free testing site. The Shikellamy State Park testing site is located at the Marina Section, 236 Marina Road, Sunbury, Pa.

"An additional day will not be added due to the strict schedule that the AMI team has to keep in order to reach the 61 counties in the 12-week period under the contract," Leggett said. "There have been other sites that closed due to weather and there were no additional days for those closures either."

The state park location is the second drive-thru location in Northumberland County. Back in October, a testing site was open at Polar Tech site in Elysburg. Over the course of five test days — Oct. 16-20 — 639 people were tested, Liggett said.

Northumberland County Emergency management director Steve Jeffery said those getting tested at the state park will need to follow the signs to the testing area, fill out the paperwork and receive their tests. Test results should be returned in a few days.

Northumberland County's positive test rate has dropped three consecutive weeks and was at 7.5 percent for the seven-day period ending Friday. That rate is the lowest since the first week in November according to the state's early warning dashboard. The 211 new cases in the county last week were the lowest in the county since Nov. 13, but still put the county in the state's substantial growth category.

“While recent decreases in daily positive cases are promising, they don’t negate the need for testing,” Acting Secretary of Health Alison Beam said in a media release. “We encourage anyone who feels they need or want a test to take advantage of these free pop-up testing locations.”

Up to 450 patients can be tested per day. Mid-nasal passage swab PCR tests will be performed. Testing is on a first-come, first-serve basis and is completely free to all patients. Testing is also open to individuals who are not county residents. Patients must be ages three and older and are not required to show symptoms of COVID-19 in order to be tested. No appointment is necessary. Patients are encouraged to bring a photo ID or insurance card. Registration will also be completed on-site. The turnaround time for testing results is two to seven days after testing, according to DOH.