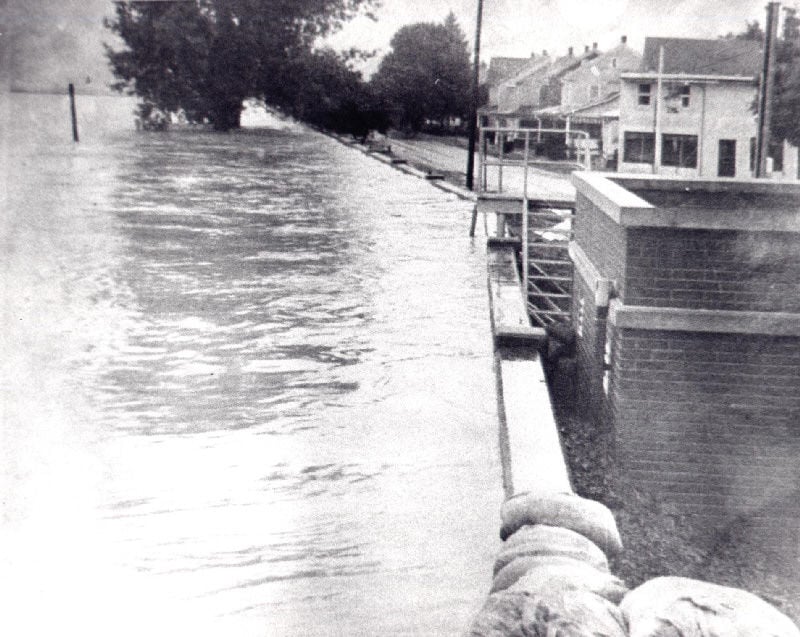 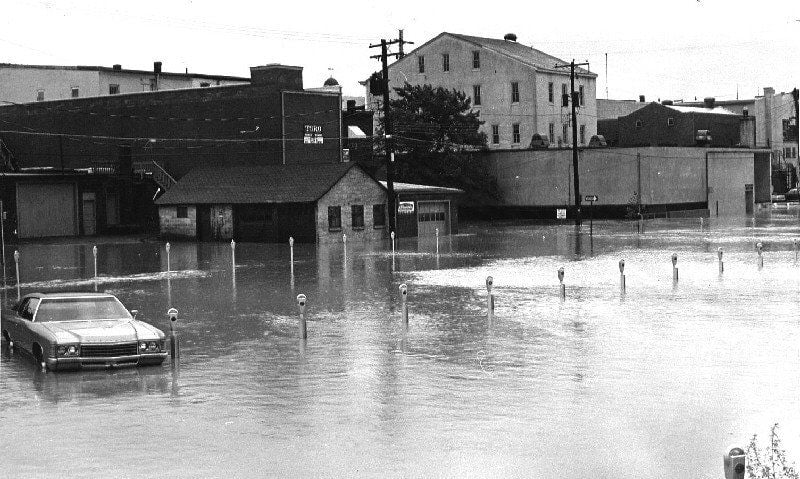 File PhotoThe municipal parking lot in Danville is inundated with water in June 1972. 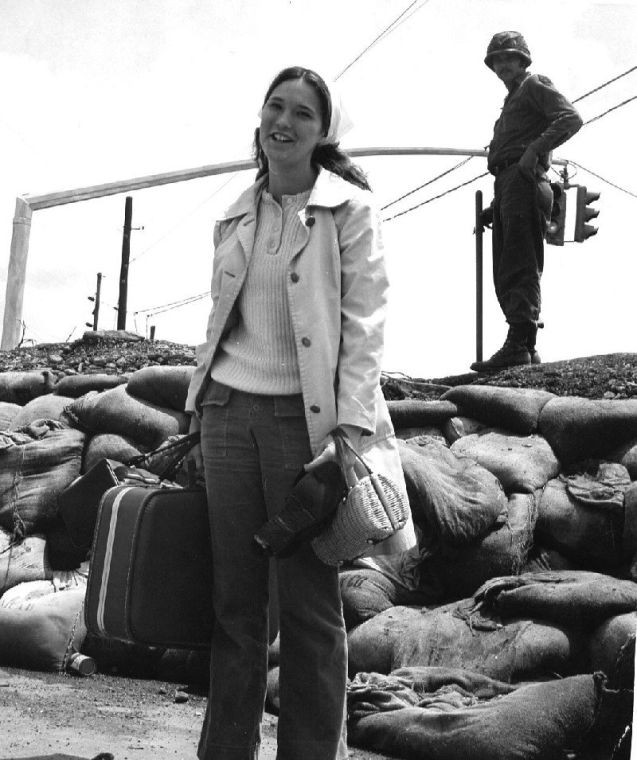 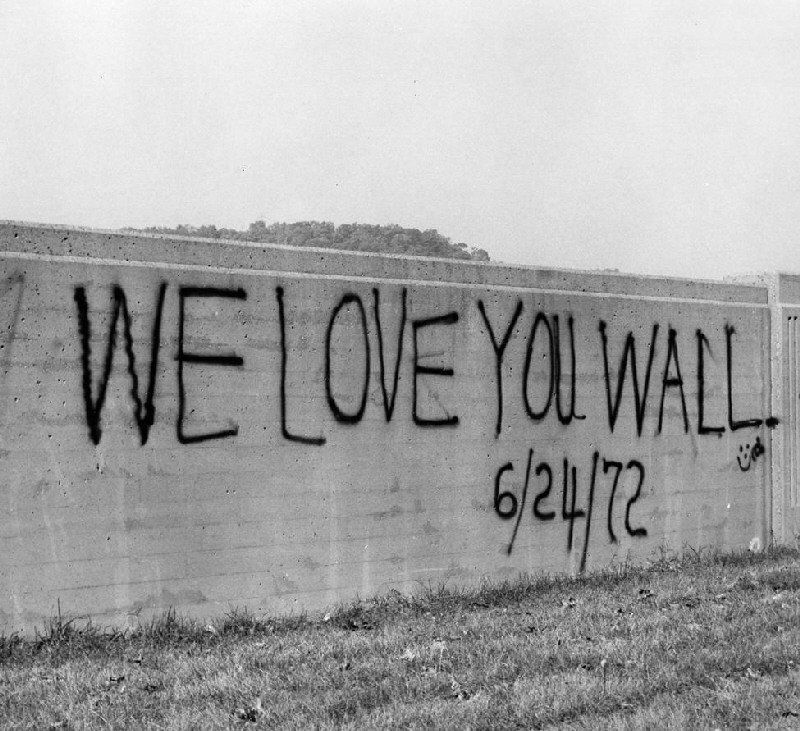 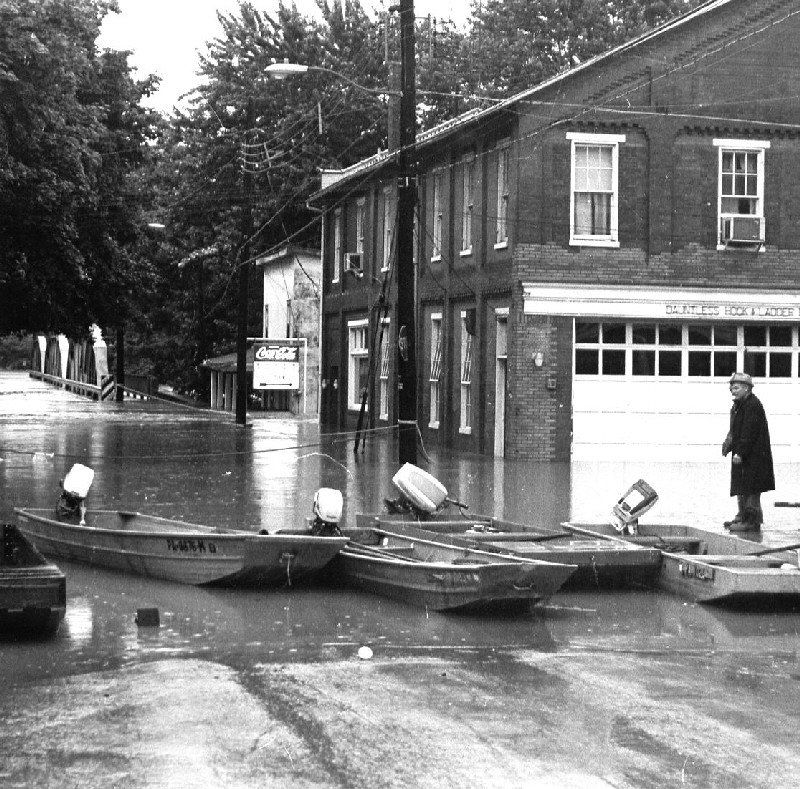 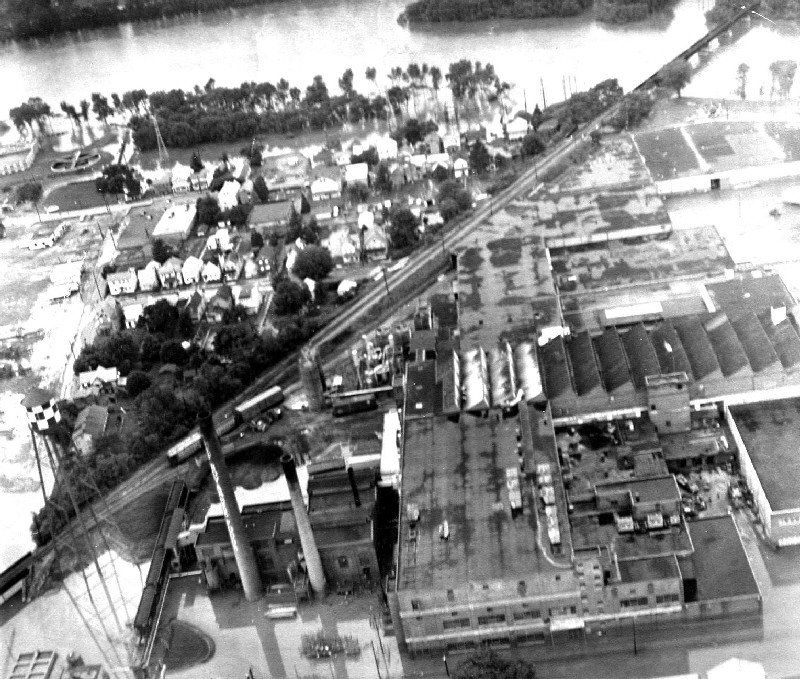 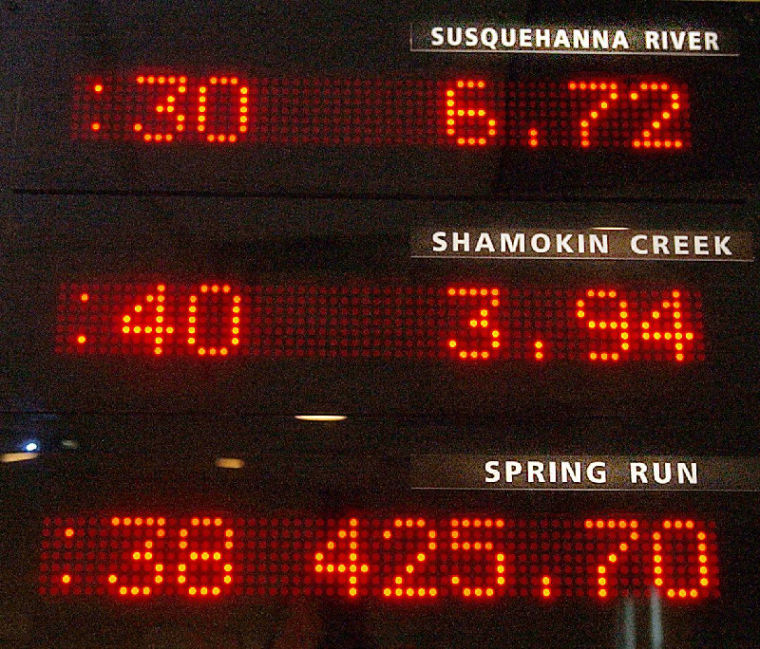 Telemetry devices installed in the Susquehanna River, Shamokin Creek and Spring Run since 1996 give the authority up-to-the-minute information on water elevation 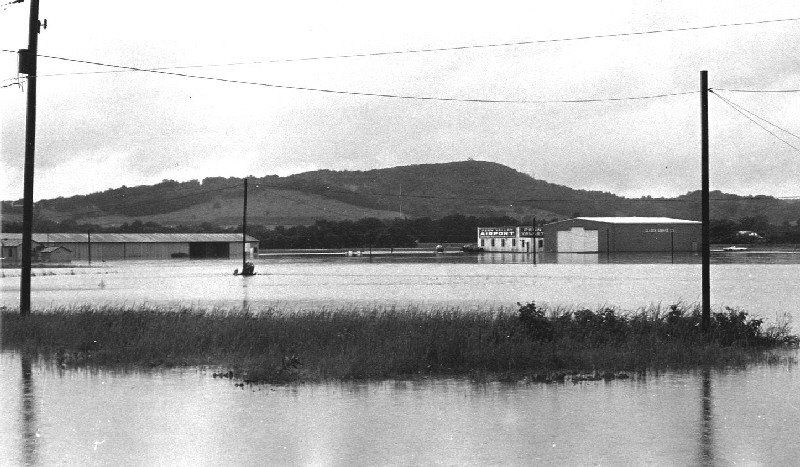 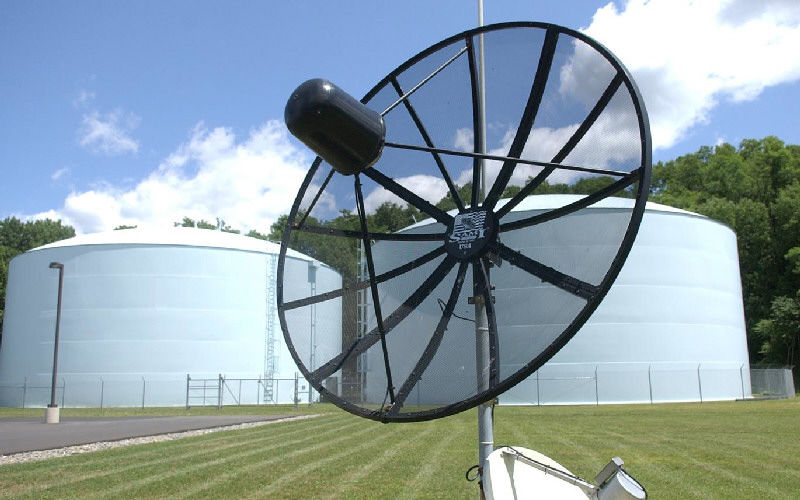 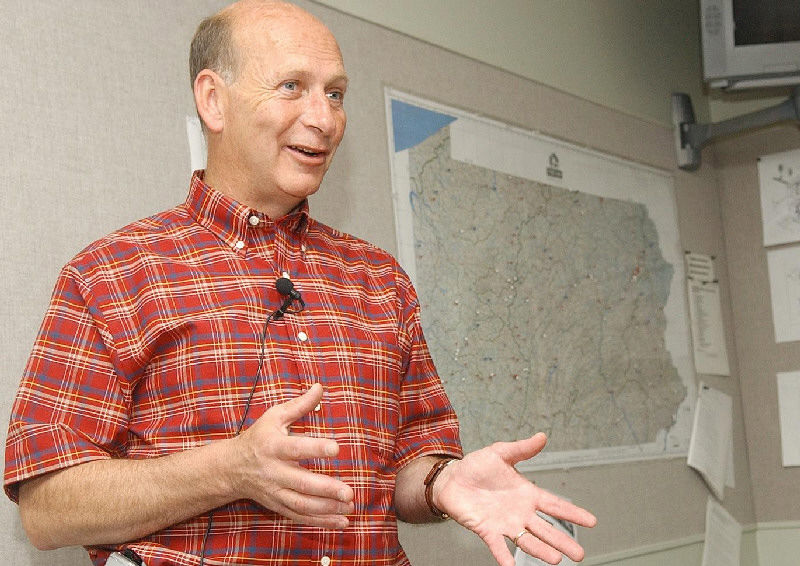 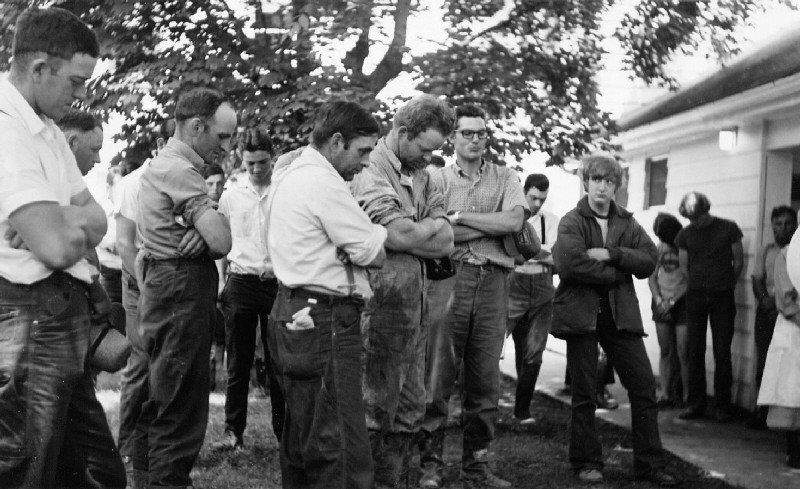 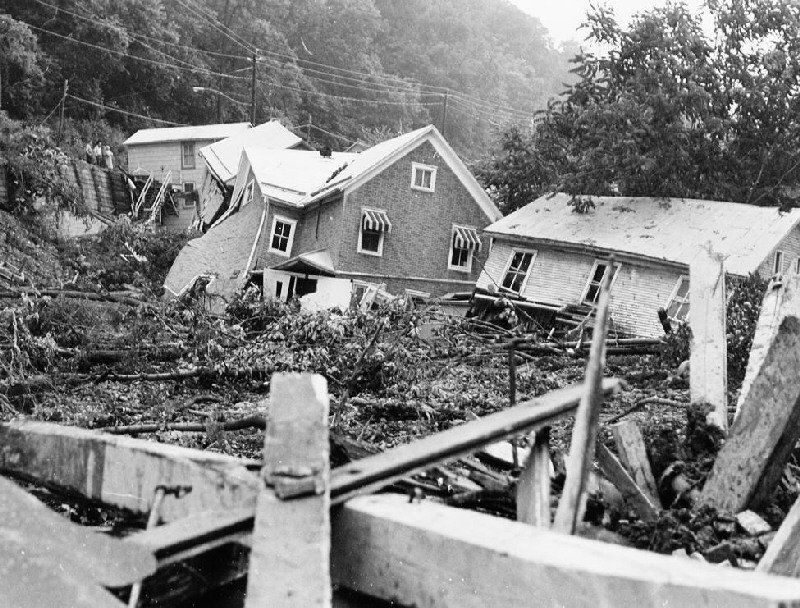 These houses in Herndon along Route 147 slid down the hill following the heavy rain from Tropical Storm Agnes.

File PhotoThe municipal parking lot in Danville is inundated with water in June 1972.

Telemetry devices installed in the Susquehanna River, Shamokin Creek and Spring Run since 1996 give the authority up-to-the-minute information on water elevation

These houses in Herndon along Route 147 slid down the hill following the heavy rain from Tropical Storm Agnes.

SUNBURY -- The low and gentle waters of the Susquehanna River today yield few clues of this waterway's violent past. Thirty-five years ago this week, the remnants of Hurricane Agnes caused the worst recorded flooding ever in the Central Susquehanna Valley. Milton, with no flood protection system, was the hardest-hit community, and P. Franklin Hartzel, then head of civil defense in the borough, was there through all of it. Now 88, Hartzel, a witness to 17 Milton floods beginning in 1936, calls Agnes the "granddaddy of them all." Flooding began in the borough's Fifth Ward, a result of Limestone Run. "And at two o'clock I was called out again, in the morning, and that was the last time I saw my bed in four days," he said. The remnants of Hurricane Agnes stalled over New York and Pennsylvania from June 21 through June 24, 1972, dumping between 10 and 16 inches of rain over the mountainous areas of Pennsylvania and western New York, with 6 to 10 inches common elsewhere. The storm caused the evacuation of hundreds of Miltonians from their homes, and nearly $30 million in property damage. All told, Agnes took 122 lives on the East Coast, 72 of them within the Susquehanna River basin. Four lives were lost in Northumberland County. The storm caused more than $12 billion in damage, $59 billion in today's dollars, making it the costliest natural disaster until that time. Properties within the Susquehanna River basin saw $2.8 billion in damage -- $14 billion in today's dollars, according to the Susquehanna River Basin Commission. According to Mr. Hartzel, poor weather forecasting gave homeowners little time to prepare. "I kept in direct contact with the weather bureau and FEMA and they kept telling me, 'By a certain time you're going to have X number of feet in Milton,' and I said, 'You're crazy, I already got that much. What am I going to have tomorrow?'" Mr. Hartzel said. "They were so far behind on the weather forecasting. At that time, we didn't have the capability of keeping up with it like we do now." Sunbury was spared major damage from Agnes, mainly for one, 2.5-mile reason: its floodwall. The floodwall's freeboard, an extra 3 feet of wall above the river's crest in 1936, was what saved the city as the Susquehanna crested at nearly 35 feet, just inches below the top of the wall. But Greg Wilt, manager of flood protection at the Sunbury Municipal Authority, said Agnes didn't spark much change in the city when it came to flood protection. "They were so overwhelmed and relieved, they didn't have the foresight to take advantage of the technology even available at that time," he said. By 1993, the city, in dire financial straights, turned the flood protection system over to the municipal authority. What the authority got, Mr. Wilt said, was a system so broken down and neglected it couldn't have withstood another flood. It was the winter flood of 1996 that really pushed the authority to make major changes to the way it handles flood protection, mainly when it comes to early warning and manpower. "We purchased a system that uplinks and downlinks from a satellite in space," he said. "We lock on to those two satellites and we download information from those satellites real-time." Telemetry devices installed in the Susquehanna River, Shamokin Creek and Spring Run since 1996 give the authority up-to-the-minute information on water elevation. All of this technology has the authority relying less on manpower. Upgrades of closure structures -- from sandbags to aluminum panels or stoplogs -- and automated gates further decreased the authority's dependence on volunteers. The operations center, the only one of its kind in the state, is equipped with beds and a kitchen so that employees need not return to their homes in the midst of a major flood event. And according to Mr. Wilt, that event is likely only a matter of time as floods become more frequent and increase in magnitude -- perhaps as a result of changing weather patterns or sprawl. "Are we 100 percent prepared? You're never 100 percent prepared," Mr. Wilt said. "Are we far better prepared than we were in '72? Yes. Light years." Milton and Sunbury are two communities with very different stories from Agnes. As Sunbury enhances its flood protection system, Milton remains without one. Mr. Hartzel still lives in the same home that flooded in 1972 while he helped so many others. He says he still thinks about those four sleepless days when Agnes came to the Valley. "Makes me wonder how I did it. Makes me wonder how I did it," he said. "But it went. It was the excitement of the job that kept me going, kept me going. And I was glad that I had the energy to do it." n E-mail comments to akeister@dailyitem.com.