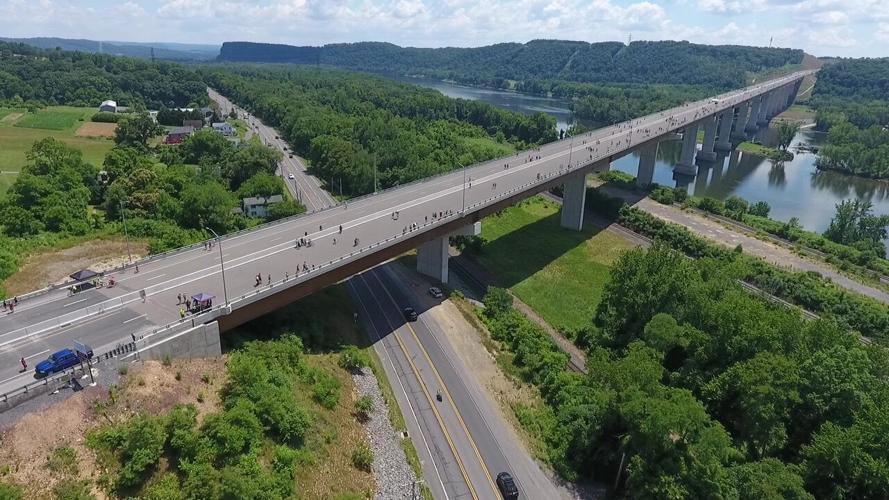 Pedestrians walk along the newly finished portion of the Central Susquehanna Valley Transportation project on June 25 before the bridge is open to vehicles. 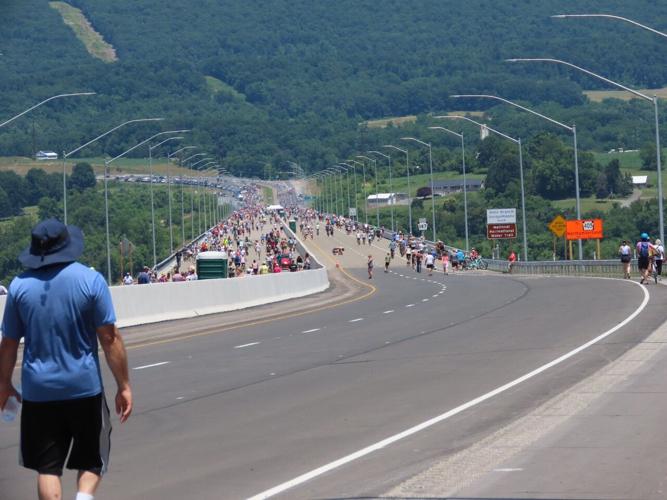 Pedestrians walk along the newly finished portion of the Central Susquehanna Valley Transportation project before the bridge is open to vehicles this month.

Pedestrians walk along the newly finished portion of the Central Susquehanna Valley Transportation project on June 25 before the bridge is open to vehicles.

Pedestrians walk along the newly finished portion of the Central Susquehanna Valley Transportation project before the bridge is open to vehicles this month.

NORTHUMBERLAND — The Pennsylvania Department of Transportation gave people the opportunity to be the first to use the new northern portion and river bridge of the Central Susquehanna Transportation project (CSVT) on June 25.

PennDOT said later that day approximately 6,000 people took them up on the offer, visiting the site on a warm and sunny Saturday morning and afternoon.

The $156 million bridge spans the Susquehanna River and is part of the $900 million thruway project.

Isaac and Mary Ramer, of Sunbury, said they came to walk in the project zone in order to be part of history.

“We wanted to be part of history and be part of the hey I walked over the bridge when it opened,” said Mary Ramer.

Mary Ramer said she likes to look at historical photos of Sunbury. She said the bypass is part of local history now and she wanted to be part of it.

“They did a nice job,” said Isaac Ramer.

Mary Ramer said views of the river look so different from a pedestrian standpoint.

“It is breathtaking,” she said.

Pedestrians and bicyclists were able to walk over the new bridge from 10 a.m. to 3 p.m.

Mark Lawrence, who does the morning news on WKOK, said he wanted to see the site for himself and said it was “spectacular.”

“This is really noteworthy,” Lawrence said.

Barb Gansel, of Williamsport, said the scene was beautiful.

She said she came to visit the project simply because it was there and she could. She said she saw the information on Facebook.

“Just to say I was there,” Gansel said.

She came for the “unobstructed view” and said she appreciated the long walk.

Michael Smith has lived in the Valley for 20 years. He referenced an ongoing joke about possibility of an overpass which long has been in discussion.

“That’ll happen when they put the bypass in,” Smith joked about certain scenarios.

According to PennDOT, The CSVT project has been in the works since the Route 15 corridor study was completed in 1959. The department said it wasn’t until the passage of Act 89 in 2013 that funding became available to complete the project. The CSVT Project is divided into the Northern and Southern Sections. The Northern Section connects Route 147 south of Montandon in Northumberland County to Route 15 south of Winfield in Union County. The Southern Section will connect with the Northern Section south of Winfield and proceeds to the existing Routes 11/15 interchange just north of Selinsgrove in Snyder County. The Southern Section also includes an interchange/connector to Route 61 (Veterans Memorial Bridge) and Routes 11/15 in Shamokin Dam. PennDOT expects to open the Northern portion to vehicle traffic in July, but an official date has not been released.

Smith said he is curious how the new project will affect traffic patterns and overall life in the region. He said he looks forward to seeing next steps to the project.

“This is monumentous,” Smith said about the overall project.