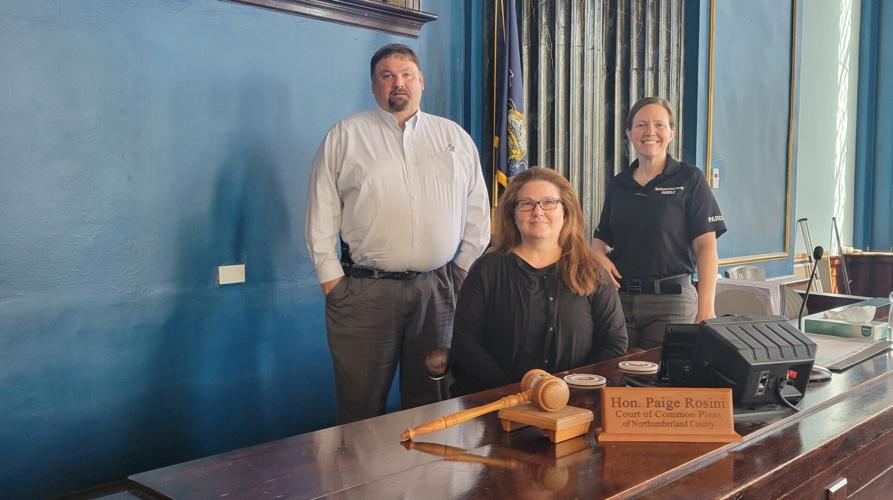 SUNBURY — The unique factors of veteran mental health led to the establishment of the Northumberland County Veteran Treatment Court in 2011.

“There are issues that are unique to veterans, especially issues that are service related, whether it’s mental health issues, addiction or PTSD (Post Traumatic Stress Disorder),” said Northumberland County Judge Paige Rosini, who oversees the county’s six treatment courts. “When they are arrested for certain things, we would rather treat them so they’re doing better as people and so there’s no recidivism. We’re trying to get away from throwing people in jail if we can help them or give them services.”

Treatment court cannot be mandated. Individuals are given the option or can request it themselves. Each individual is reviewed before being approved for the program. The nature and seriousness of the charges as well as victim input are considered in the application, the team said.

“Sometimes the victim is a family member, and the victim wants them to get treatment,” said Rosini.

They are intensely supervised throughout the course of the program. They must submit to Drug and Alcohol and mental health evaluations and must follow all recommendations. The overall sentence is usually three years; the treatment court portion of the sentence is usually completed within one year and participants remained under supervision until the balance of the overall sentence expires.

Adult Probation Supervisor Megan Kriner, the treatment court coordinator, said 31 veterans have graduated from the program. She said the change through the program is noticeable in the successful graduates.

“With a lot of people, you can see that change over time,” said Kriner. “They may be irritated they’re involved in the criminal justice system or under supervision. When they start out, they have a lot of negative feelings with being in the system. The folks who open up their mind and listen to what’s being taught to them, you can really see people relax and change for the better. They get their jobs back, they have better relationships with their families and loved ones.”

Veterans are also receiving guidance and support from fellow veterans who coach, guide and serve as role models for the participants. Volunteer veteran mentors may assist the participant to navigate through treatment, the court and Veterans Affairs system, but they do not assume the role of attorneys or treatment providers. Participants and mentors are matched as much as possible, by branch of service, by area of the county where they live.

“It’s another nice resource for the participants to have, to have someone who has been through a lot of similar experiences that they can talk to,” said Kriner. “Our mentors help our folks get to meetings or different medical appointments or treatment appointments. They’ve been a nice person to lean on for our vets.”

Mentor wanted to give back

Vietnam War-era veteran Buzz Meachum, 75, of Northumberland, has been a mentor with the program for 10 years. After hearing about the program in the media, he contacted Judge Saylor, his neighbor, and asked about being a part of it.

“I’ve been very fortunate in my past service life,” said Meachum, who served in the Navy. “This program looked like something I could do to give back to those who didn’t have my good fortune.”

In addition to Meachum, the following are also mentors in the program: Phil Rosko, Jim Kealy, Stacy Stancavage and Paul Leschiskie. Mike Balducci was also instrumental in the implementation of the program.

Meachum said he would meet with participants, call and talk whenever they needed someone, attend court sessions and encourage them. He said he especially likes when he never hears from a veteran again because it means they have moved on with their lives in a positive way.

“It’s been worthwhile,” he said. “We’re encouraging them and telling them there’s a better way to live.”

The program has been successful and probably saved lives, he said.

“Not everyone makes it through the program,” he said.

‘Help is out there’

Meachum said he is seeking physical and mental health services through the VA due to his exposure to Agent Orange. He now regularly sees a psychologist in Williamsport.

“I reached a point a year ago, I knew things weren’t right,” he said. “I was getting frustrated. My temper was getting shorter. It (therapy) has been a great help.”

Veterans are a unique group of people, he said.