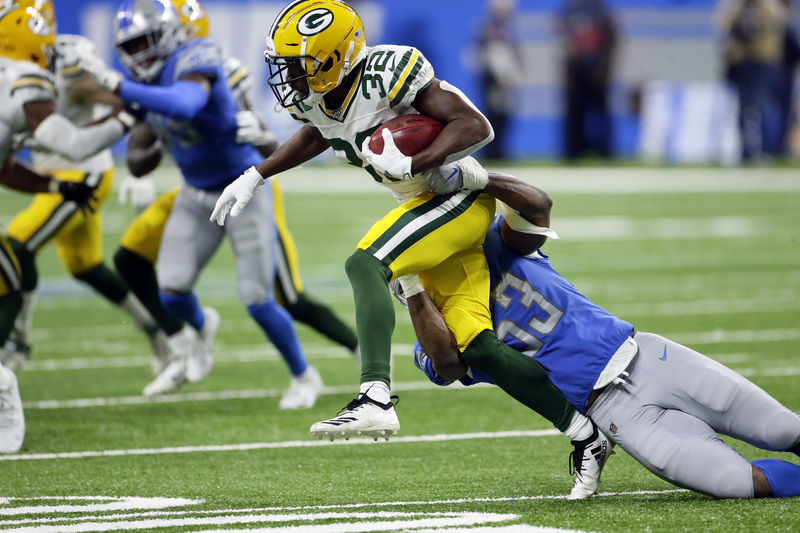 Green Bay Packers running back Tyler Ervin is tackled by Detroit Lions linebacker Jason Cabinda, rear, during a game in December. Cabinda, a former linebacker at Penn State, applauds the NCAA for its decision to allow athletes to make money off their own likeness. 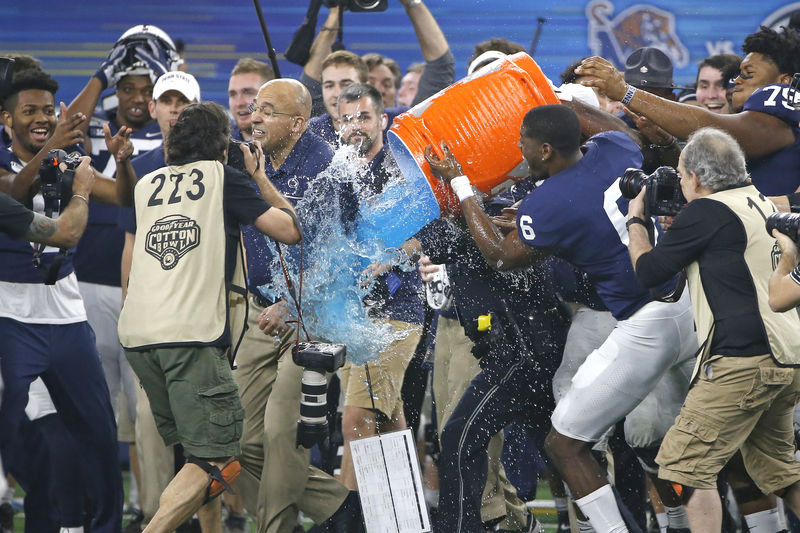 Penn State coach James Franklin is doused with Gatorade following a win over Memphis in the Cotton Bowl. Franklin supports the new collegiate reforms, but worries about rules enforcement. 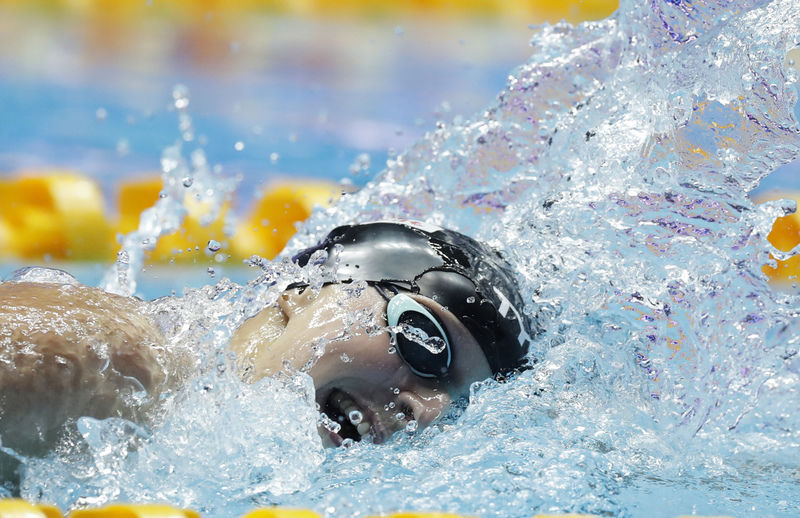 Katie Ledecky swims in the women’s 800-meter freestyle final at the World Swimming Championships in Gwangju, South Korea, last July. The new NCAA rules will allow Olympic athletes like Ledecky make money off their likeness while in college.

Green Bay Packers running back Tyler Ervin is tackled by Detroit Lions linebacker Jason Cabinda, rear, during a game in December. Cabinda, a former linebacker at Penn State, applauds the NCAA for its decision to allow athletes to make money off their own likeness.

Penn State coach James Franklin is doused with Gatorade following a win over Memphis in the Cotton Bowl. Franklin supports the new collegiate reforms, but worries about rules enforcement.

Katie Ledecky swims in the women’s 800-meter freestyle final at the World Swimming Championships in Gwangju, South Korea, last July. The new NCAA rules will allow Olympic athletes like Ledecky make money off their likeness while in college.

The NCAA’s Board of Governors last month voted historically to amend an NCAA rule, which will clear the way for NCAA student-athletes to receive compensation for their name, image and likeness.

The rule is expected to be in place in time for the 2021-22 sports seasons.

While colleges and universities will not be permitted to compensate their student-athletes, their players will be allowed to receive payment through third-party endorsements.

Student-athletes will not be penalized nor ruled ineligible by the NCAA or their schools for money received due to their status as athletes.

“Anything that’s going to be a positive for our student-athletes we’re supportive of,” Franklin said. “And to be honest with you, I think pretty much that’s the case all across the country.”

While Franklin said he’s in favor of any measure that will further enhance the experiences of student-athletes, he also mentioned there are some checks and balances that must be vetted to ensure ethical and unsullied practices — once the new rule takes effect.

“A lot of times I see that the NCAA — and they get beat up over things like this — but it’s a lot more complex than what is probably reported a lot of times or things that are discussed,” Franklin said. “The complexity of making sure that things are staying within the guidelines, I think that’s the challenge more than anything.”

Franklin added the Board of Governor’s ruling is a sign of the ever-changing nature of college athletics.

“The NCAA and the model of amateurism is evolving, and at Penn State, we’re going to be supportive of that like we always do within the guidelines for our student-athletes,” Franklin said. “But it’s going to be a transition, and it’s going to be tricky. I think there’s a lot of things that still need to be worked through. We embrace whatever the policies are and whatever the rules are for the NCAA and then try to put our student-athletes in the best position to be successful.”

Former Penn State linebacker Jason Cabinda played for the Nittany Lions from 2014-17 and earned third-team All-Big Ten honors following the 2016 regular season. Although he currently plays for the Detroit Lions, Cabinda was pleasantly surprised to see the NCAA make a step in the direction of the well-being of its student-athletes.

“My immediate reaction was, ‘Alright, man, it’s about time,’” Cabinda said. “It’s been very clear, especially in recent years, college football is a product. College football is a business. The players are the product. They are what make the fall exciting. The fans go to see their favorite players. There’s a certain aura about college football in general and rawness of the amateur athletics – quote, unquote – as they call them.”

While Cabinda is fortunate to be compensated for his football ability at the professional level – he also played for the Oakland Raiders – he said many currently in the college ranks will see their careers conclude once they exhaust their eligibility. Name, image and likeness will allow them to seize what might be their only opportunity to be compensated for their athletic talents.

“For him not to be able to take advantage of his own skills, his own product, his own work that has gotten him there, I think is kind of ridiculous,” Cabinda said. “A lot of dudes obviously don’t get the opportunity to go to the NFL after college. To be able to make that money, and it possibly be the only he gets to make out of football, is what they should be able to do. It obviously takes a ton of hard work to get to the Division I level or to even be able to play at the NCAA level.”

There likely will be more endorsements for stars of revenue-producing college sports — football and men’s basketball — but opportunities could evolve for non-revenue and women’s sports as well. In the past, Olympic swimmers such as Stanford’s Katie Ledecky and Indiana’s Lilly King were unable to cash in on product endorsements after winning gold medals during the 2016 Summer Games in Rio de Janeiro. Now, Olympic athletes will be able to generate third-party revenue as well.

The Board of Governors has identified gender equity as one of its guiding principles in crafting NIL guidelines.

“It will matter, and it will be a strategy,” Indiana women’s volleyball coach Steve Aird said. “I think some of the programs that have big followings, big crowds, lots of community support, I think it will matter. I don’t know what the framework from the NCAA is going to be, but I know that if you are an athletic department now, you better be aggressively thinking about how you are going to position yourself …

“We’re going to go as far as we can possibly go in that realm, and I think it’s exciting. We’ve been joking about kids on our roster about throwing them on billboards and doing shows and having their own cereal. We’ll be at the front end of that.”

Those opportunities, though, could be limited due to the coronavirus pandemic, which has left 36 million unemployed and companies scrambling for ways to cut costs. That has raised doubts from some administrators wondering if the timing is right for a change that will alter the college sports landscape.

“It sure feels like a ‘pause’ button would still be welcome,” Notre Dame athletic director Jack Swarbrick said. “It is so hard, in the current context, to have the sort of conversations that we ought to be having about the finer points of what will emerge as name, image and likeness. Plus the financial landscape is going to change so dramatically over the next 12 months that it’s a challenge to figure out how a concept that developed during what was a fundamentally different economic circumstance will play out going forward.”

The NCAA was pushed into NIL reform in part due to state legislation, beginning with California’s Fair Pay to Play Act. Similar laws are now being pursued in Florida, Pennsylvania, South Carolina and other states.

“My biggest concern is that we’re starting to see schools structure these NIL programs, and we’re even seeing that marketing consultants and marketing professionals are being hired by athletic departments to take on this cause,” Maguire said.

Maguire understands both the business side of college sports and the adversity student-athletes can face. After playing his freshman season at Saint Louis, Maguire, a 6-foot-5 shooting guard, transferred to then Division II Northern Kentucky in 2007 due to a coaching change from Brad Soderberg to Rick Majerus.

Then, after scoring 33 points in a preseason game against Louisville and leading all NCAA divisions in free throw shooting in his sophomore year at UNK, Maguire was diagnosed with testicular cancer. He beat the disease, earned his undergraduate degree and then got his law degree at the school while serving as a graduate assistant coach.

Maguire started a website — nameimagelikeness.com — which informs athletes of their rights and could serve as a future vehicle for student-athlete brand building.

Maguire said his main goal is making sure athletes know they have a voice in making their marketing decisions. The NCAA has already proposed guardrails that could limit endorsement opportunities, including group licensing, which will prevent the relaunch of the popular EA Sports college football and basketball games.

The video games were discontinued after Ed O’Bannon successfully sued the NCAA over profiting off his likeness with the product.

“Everybody wants their video games back,” Maguire said. “It’s really interesting to me that you see all these concerns thrown out about the recruiting advantages, the inequities within the program so the offensive linemen being jealous of the quarterback, all of these concerns being thrown out, but the easiest way to make sure that everyone is getting a piece would be to (allow) group licensing and that’s the piece that’s missing.”

Maguire views NCAA guardrails being put forth in the guise of recruiting fairness as short-sighted. More endorsement opportunities, he said, could lead to a more level playing field.

“How many four- or five-star recruits have gotten out of state?,” Maguire said. “They go to Duke. They go to Kansas. Why? Because the stage is brightest there. You get that opportunity to go to UK and be developed as a professional.

“If you can now capitalize on these four years and be Jayson Tatum and be the spokesman of Enos Pizza while playing at Saint Louis University, to me it’s a balancer because you are going to have these opportunities for the four- and five-star players to go to the smaller programs, smaller markets, because they are going to be not only celebrities on campus but celebrities in the entire town.”