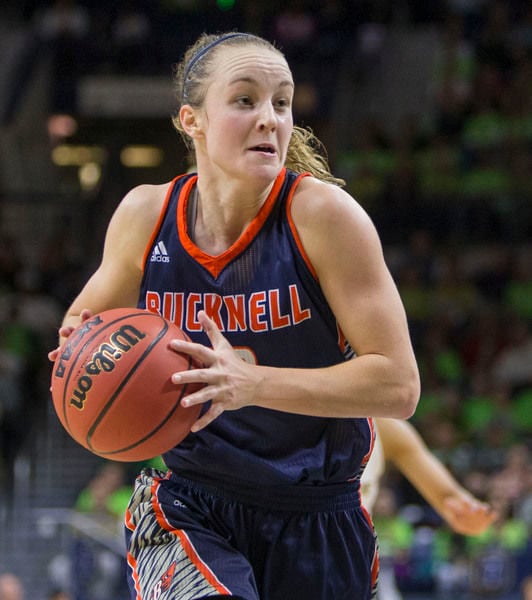 Bucknell’s Claire DeBoer drives to the basket against Notre Dame during a 2015 game in South Bend, Ind. 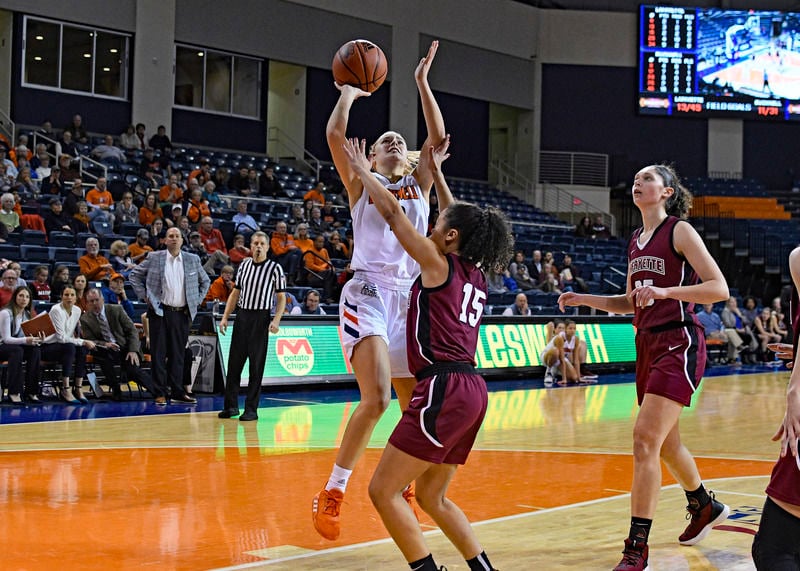 Bucknell’s Marly Walls takes a shot over Lafayette’s Nicole Johnson during a January game in Sojka Pavilion in Lewisburg.

Bucknell’s Claire DeBoer drives to the basket against Notre Dame during a 2015 game in South Bend, Ind.

Bucknell’s Marly Walls takes a shot over Lafayette’s Nicole Johnson during a January game in Sojka Pavilion in Lewisburg.

With some extra time on his hands due to the coronavirus pandemic, Bucknell women’s basketball coach Trevor Woodruff decided to delve into the program’s history.

Woodruff, who is preparing for his second season in charge of the Bison, spoke to 14 former players across five Zoom calls — one focused on each decade from the 1970s to the 2010s — about their experiences during and since their Bucknell playing careers.

“The main reason I did it was because when I was hired I was really thrown into the fire,” Woodruff said. “With not having a whole lot of time on the front end, I wanted to start connecting with people from the program’s past.”

“The people who laid the foundation for our program were really fantastic,” Woodruff said. “(This) was more of a get-to-know-you, reminisce thing, and for them to fill me in on the old stories.”

Woodruff had met some of the former players, but this was his first chance to have an in-depth conversation with them and to hear some of the highlights from the program’s best.

“Outside of really the teams from the last couple seasons, I didn’t have a strong knowledge of who the players were,” Woodruff said. “I’m hoping to connect people and pull everybody together under this umbrella of Bucknell women’s basketball.”

One of the often-repeated refrains from the former Bison in the Zoom conversations is something Woodruff said is familiar to his program.

“A common thread throughout was how quickly the college experience goes by,” Woodruff said. “That’s something we try to already stress.”

Not only does it go by quickly, but it’s also the last time many of the athletes play competitive basketball.

When Karin Wegener and Bobbi Castens were looking for a college to attend, the process was much different than it is today.

“I wasn’t recruited,” Wegener said. “I requested a catalog through the mail. I saw Bucknell had biology, basketball, lacrosse and field hockey, and those were the four things I was interested in. I never met the coaches, never met the players.”

Wegener and Castens — both of whom graduated in 1979, and were the first women inducted into the Bucknell Hall of Fame in 1989 — went 29-22 during their four years with the Bison. Their Bucknell teams played between 10 and 16 games, and did not play a game outside of Pennsylvania.

In addition, the Bucknell women’s basketball team didn’t have practice uniforms until a point during their careers.

“The men were allowed to practice twice as long as we were,” Wegener said. “I don’t know that I would have wanted to practice longer.”

Wegener and Castens were both three-sport athletes, and they signed up to play after arriving to campus.

“It was like a job fair,” Castens said. “There were tables set up with the coaches. That was recruiting.”

Marly Walls, who will be a junior for the Bison next year, said it was hard to believe the women played three sports while in college.

“It was interesting to have those conversations,” Woodruff said. “There are things we take for granted that players from the past didn’t have, such as practice uniforms. ... They signed up to play basketball, not were recruited. Things that are foreign to today, back then were normal.”

Women’s college basketball has changed a lot in five decades.

“When you compare the 70s to today, how far it has come is amazing,” Woodruff said. “It didn’t happen overnight. ... Where we are now is light years from where we were, and the benefits of Title IX can be seen today.”

Castens, who holds the single-game Bucknell rebounding record with 28, said if she played today she would be a slow guard at 5-foot-10.

“It’s really fun to watch the skill level of the players,” Wegener said. “I’m really glad that the women are getting the publicity. They’re so fun to watch. They’re really good players.”

Along with changes in recruiting, travel and quality of play, preparation for games and the season overall has changed significantly throughout the years.

“Back then weightlifting wasn’t even a thing for the girls,” Walls said.

“What we didn’t have in strength, we made up for in attitude,” said 1990 graduate Susie Hopper.

Hopper and the other players from the 1980s said they didn’t do much weight training — and what they did wasn’t done as seriously as it should have been — but noted that they had a lot of cardiovascular endurance.

“The focus now is to emphasize training and strength and conditioning, which were very foreign to the older teams,” Woodruff said.

KC Vlah, a 1996 graduate, said one of the things she remembered most vividly from her time at Bucknell was 5 a.m. ballet as training for basketball.

“That really sticks with me, the ballet,” Vlah said. “I don’t know that I got a lot out of it other than memories.”

“Training has changed over the years,” Woodruff said. “At points in my career, we’ve instituted team-wide yoga and other things. Dance has not been a part of it.

“Training is about helping the players be the best they can be, so you’ve got to take a look at different things.”

Woodruff said one of the impressive things was seeing the relationships the alumna forged.

“An unexpected byproduct is I think we may have reconnected people from the decades,” Woodruff said. “I feel this in my own life. If I haven’t talked to somebody in a couple months or a couple years, the conversation just picks up with high school or college friends, and that’s what I saw.”

Woodruff said he was hoping to foster more connections among different generations of former players.

“Through things like this, I’m hoping those connections will help the program,” Woodruff said. “We have a few folks who live in the Maryland area, so hopefully when we go to Navy we’ll see some of those folks.

“At a place like Bucknell, one of the greatest strengths is the network of people around you even after you leave. I know the alums are eager to connect with the current players, and help them professionally, personally. I’m already seeing benefits of those conversations.”

One such dialogue was immediately sparked by the video talks. Walls said she reached out to Hopper to ask about a career path she was interested in: pharmaceutical sales.

“I just wanted to get some advice on how to prepare myself for the future,” Walls said.

A similar situation happened organically as 2000 graduate Lori Houck and DeBoer both worked at ESPN at the same time. DeBoer has since moved on to the MLB Network.

“I really enjoyed connecting with someone I didn’t really know, but we had something in common,” Houck said.