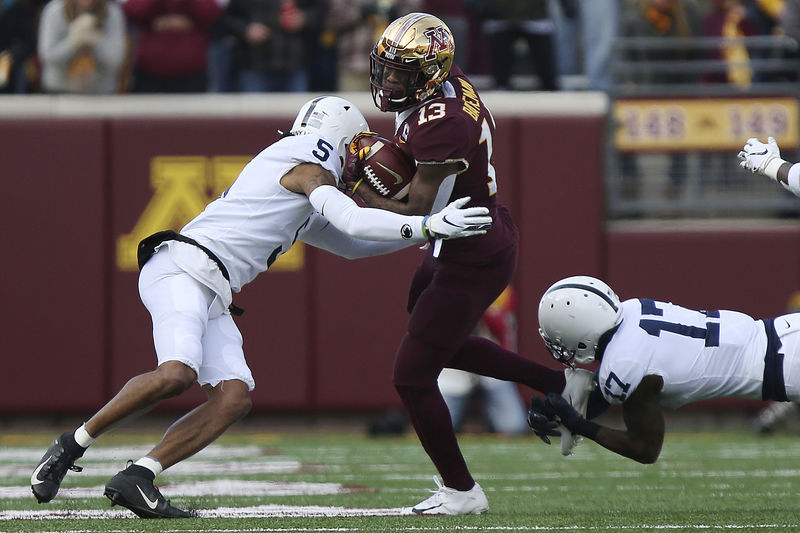 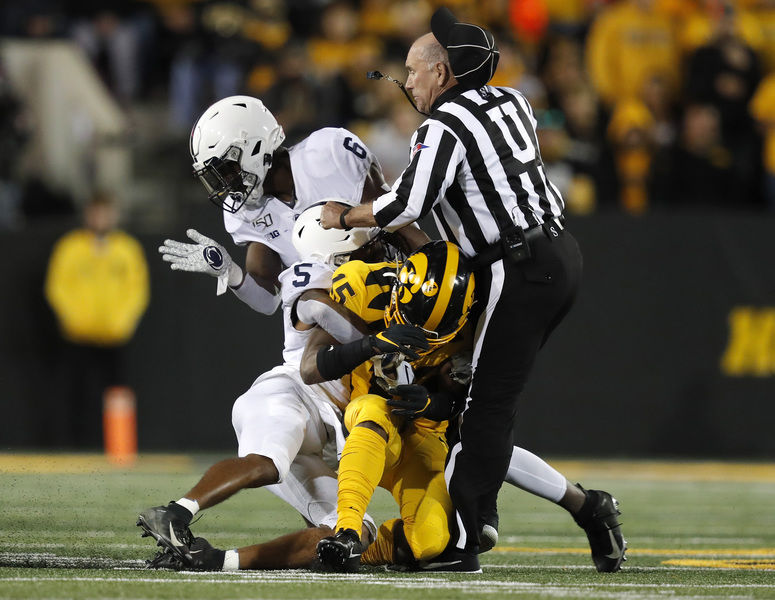 Penn State cornerback Tariq Castro-Fields, left, tackles Iowa running back Tyler Goodson causing an official to be knocked to the ground during an October game in Iowa City, Iowa.

Penn State cornerback Tariq Castro-Fields, left, tackles Iowa running back Tyler Goodson causing an official to be knocked to the ground during an October game in Iowa City, Iowa.

STATE COLLEGE — As Penn State’s seasoned leader at cornerback, Tariq Castro-Fields is fully aware of the expectations that accompany his role next season.

Rather than feel overwhelmed and burdened, the Nittany Lions’ senior defensive back said he’s ready to accept and embrace it head-on.

“I don’t really feel the pressure,” Castro-Fields said. “If that’s my role, then I’m just going to capitalize on it. I think I am ready for it. I really know the defense. I’m able to play the field and the boundaries.”

“He was a different player,” Penn State cornerbacks coach Terry Smith explained earlier this month. “He wasn’t as confident; he wasn’t as sure of himself because of the injury. Not to make an excuse, he knows and recognizes it. We’ve talked about it. It’s one of our offseason plans and goals for him, to make sure that he can be more consistent throughout the season.”

“It was a frustrating process, but the coaches had a plan for me, and I just tried to do the best I could (with) whatever they asked me to do,” Castro-Fields said. “Whatever my role was with the team, I wanted to do it to the best of my abilities. It was kind of frustrating, but Coach (James) Franklin kind of preaches how to do what you can control, so that was my main focus. I’m fully healthy (now). I’m ready to go.”

In analyzing the 2019 season, Castro-Fields said he’s taken inventory of points of the game and his position he can refine to become an even more effective lockdown corner in 2020.

“Just focus on my fundamentals more – switching from off the press, doing a lot of things that can help me maintain the fundamentals,” Castro-Fields said. “I think that’s the main thing I’ve gained from last year.”

Castro-Fields finished his junior season with 52 tackles, two interceptions and eight pass deflections. He pointed to a few aspects of his game last season that attributed to some of his success.

“I think I was just playing with a lot of confidence,” Castro-Fields said. “Just being physical. I thought I knew the defense really well, which allowed me to kind of play fast. I think my confidence was something that each game I was just showing myself what I could do, and it really helped.”

Penn State’s secondary next season will have to fill the void left by the departure of cornerback John Reid, who was selected by the Houston Texans in the fourth round of the 2020 NFL draft. In losing Reid, the Nittany Lions not only lost a player who had five years of experience, but also a cerebral defender who was one of the Big Ten’s most sound in terms of fundamentals.

While Reid is no longer a part of Penn State’s cornerback room, Castro-Fields said his influence will still be felt and it will have an impact on his plays and that of other members of the Nittany Lions’ secondary.

“I think the biggest I think I learned was (the importance of) film,” Castro-Fields said. “Everyone knows he’s a film junkie, so the film part was one of the things he showed me – how to break it down, what to look at. His competitiveness. When we did o-line tackle or press, he was the first one to jump out there. He goes 110% in whatever he’s doing, so he kind of showed me how to practice.”