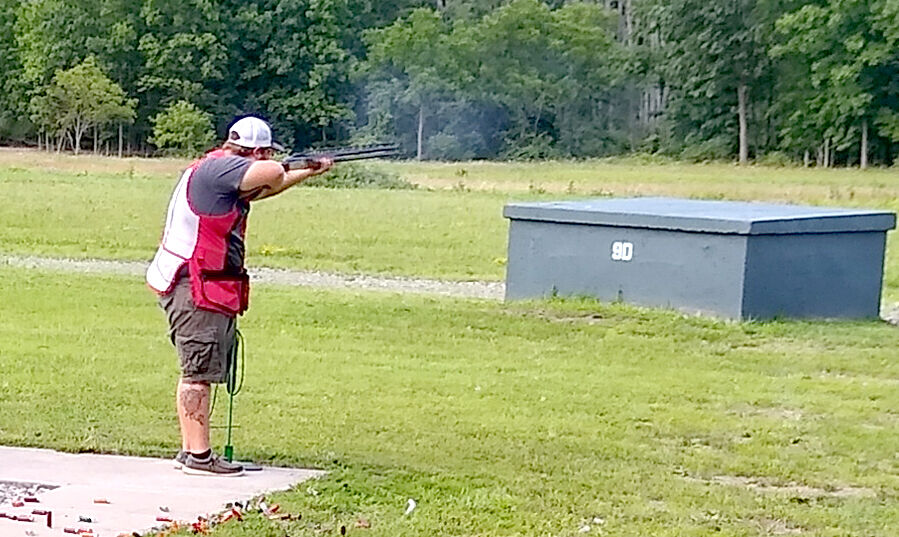 Wesley Beaver, of Danville, fires at a pair of clay targets from position five in last week’s Eastern Zone shoot at the Valley Gun and Country Club in Elysburg. 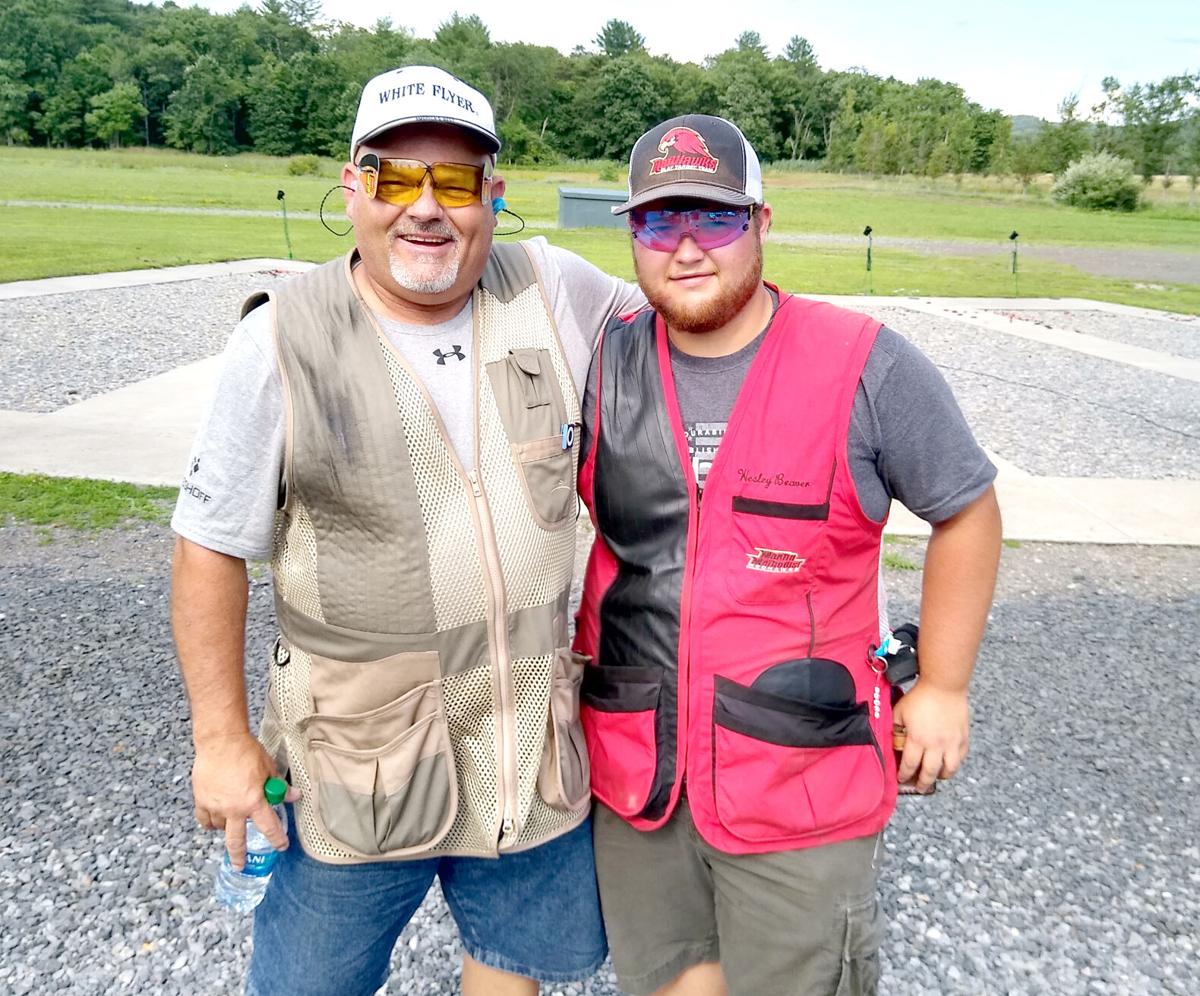 Brian James, of Bethlehem, left, poses with Danville’s Wesley Beaver, during a break in competition at the Eastern Zone Shoot last week at the Valley Gun and Country Club in Elysburg. The Danville High School graduate is the 2021 Pennsylvania Trapshooter of the Year, and a member of a national championship college clay target team.

Wesley Beaver, of Danville, fires at a pair of clay targets from position five in last week’s Eastern Zone shoot at the Valley Gun and Country Club in Elysburg.

Brian James, of Bethlehem, left, poses with Danville’s Wesley Beaver, during a break in competition at the Eastern Zone Shoot last week at the Valley Gun and Country Club in Elysburg. The Danville High School graduate is the 2021 Pennsylvania Trapshooter of the Year, and a member of a national championship college clay target team.

ELYSBURG — It started seven years ago with a candy bar.

Brian James’ first encounter with Danville’s Wesley Beaver happened in Elysburg at the Valley Gun and Country Club when Beaver was 12.

“This young man came up to me, and I asked his mom and dad (Wyatt and Tonya) if he could have a Hershey’s with almonds,” the veteran trapshooter from Bethlehem recalled last week between rounds of doubles at the Eastern Zone shoot.

“We went and got a candy bar, and later that afternoon he bought me one. The next thing I know he’s at my camper getting my gun, the same one I’m shooting nowadays,” James said, “and now he’s like my little brother.”

That chance meeting during a Pennsylvania State Shotgunning Association event has led to an enduring relationship and a whirlwind adventure for the now 19-year-old Beaver, who was introduced to the sport after joining the Montour County 4-H Club. He won a college national championship this year, and was named the Pennsylvania Trapshooter of the Year.

That was especially impressive, as life took an interesting turn for the 2020 Danville Area High School graduate.

The misfortune that struck Beaver as a junior would have been devastating for most high school athletes with aspirations of earning a college scholarship.

Beaver, who had wrestled since age 6 as a kindergartner, sustained a shoulder injury, which ended his career on the mat.

However, it didn’t end his dream of a college scholarship.

Beaver already had other plans. Buoyed by a four-year run of success as a trapshooter, he set his sights beyond the flying clay targets in front of him to also aiming for a college scholarship in clay target shooting.

On his second college visit, Beaver hit the target, earning that scholarship to the former Martin Methodist College in Pulaski, Tenn. The school has since been acquired by, and become a branch of, the University of Tennessee-Southern.

While visiting another school — Bethel University, also in Tennessee — Beaver got a text from high school friend Cody Kizis, a Martin student attending on a bowling scholarship. Kizis told Beaver that Martin had a shooting team, and he should come down to visit.

One visit to Pulaski and a meeting with Red Hawks coach Chad Whittenburg, who is now in Tokyo with the U.S. Olympic shooting team, was all it took. Whittenburg is now attending the Olympics as an official delegation member as the chairman and president of USA Shooting.

In March, as part of a year filled with enough highlights to fill a case of scrapbooks, Beaver became a national champion.

When the Redhawks left to return to campus, they were in first place, but second-place Angelo State (Texas) was still competing.

The team stopped at a Whataburger and while chowing down, Whittenburg was heard muttering something about getting on the bus and about national champions.

“We were all sitting there in suspense, and we were like, ‘What did he say?’ and he said, ‘Congratulations, you are the national champions.’ It was pretty neat,” Beaver said.

Winning the title as a freshman might leave nowhere to go but down, but Beaver strongly disagrees.

“We won one in the last year of the school, and now we want to win it in the first year of our new school,” he said, adding that they will now bump up to Division I (because of the additional number of students) which increases the challenge.

And if winning a national championship wasn’t enough for the former Ironman, he learned during his winter break that he had been named Pennsylvania Trapshooter of the Year. He was honored during the PSSA State shoot last month.

“To me, that’s a big deal, especially in Pennsylvania, which is a pretty tough state (for trapshooting),” Beaver said.” You look at some of the names of people who have won championships here, and you go out to the Grand National (in Sparta, Ill.), the biggest shoot there is, and you’ve got people from Pennsylvania who are right there (contending for championships).”

Beaver has been on several all-state and all-America teams, and has been captain of the state team the last three years.

He continues to pile up the trophies, including last week when, shooting on a squad with James, he won 10 more, including the singles championship with a 397 and resident high overall with a 967.

That’s no surprise to James.

“He’s an exceptional young man,” James said. “A lot of these kids will do very well, but once they don’t do well, they want to fly off into another direction or another sport.

“Each day he’s had a bad day he’s learned something from it that day and turned it into a positive.”

A glance at Beaver’s averages from his rookie year until now reveal a continued improvement.

He achieved the maximum 27-yard mark in handicap at the Great Lakes Grand in Michigan in 2016, the year that he said was his first big year as far as traveling and winning events. He has competed in shoots in states up and down the east coast as well as the Midwest.

Beaver, who will compete again next month in the Grand American, will return to school on Aug. 25 and continue to study in his major, criminal justice, and try to help his team win another title.

He gives much of the credit for what he has accomplished to his parents and to James, along with what he learned taking a class from Hall of Fame shooter Kay Ohye, of Florida.

“This game takes a lot of practice,” he said. “If you’re not practicing, you’re not going to be at the top of your game.”

His practice time suffered this year due to a national shortage of shotgun shells. Beaver had to often decide whether to compete (to keep his all-American status) or to practice. He chose the former and said, although practice would have helped, he has done well.

“I’m not saying I’ve had a tremendous year, but I’ve had a good year,’’ he said.

“It’s refreshing to see a young man of his caliber stick with it, and he’s courteous and kind to the older shooters,” James said. “I have a lot of respect for him, and he’s become like a son to me.

“Wesley has been real good for a while now, his name is well known and what he’s done has been amazing.”