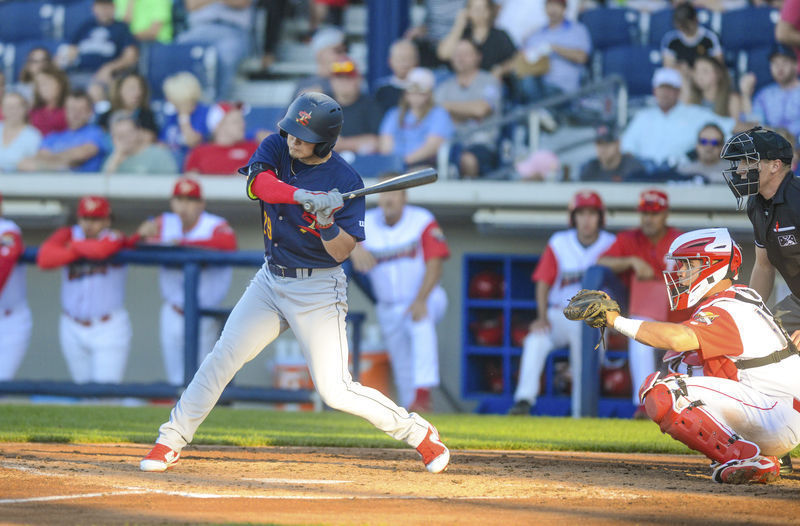 Shikellamy graduate Nick Dunn gets a hit for the State College Spikes against the Williamsport Crosscutters at Historic Bowman Field in game in 2018. The New York-Penn League announced that its season is indefintely postponed due to the COVID-19 pandemic. 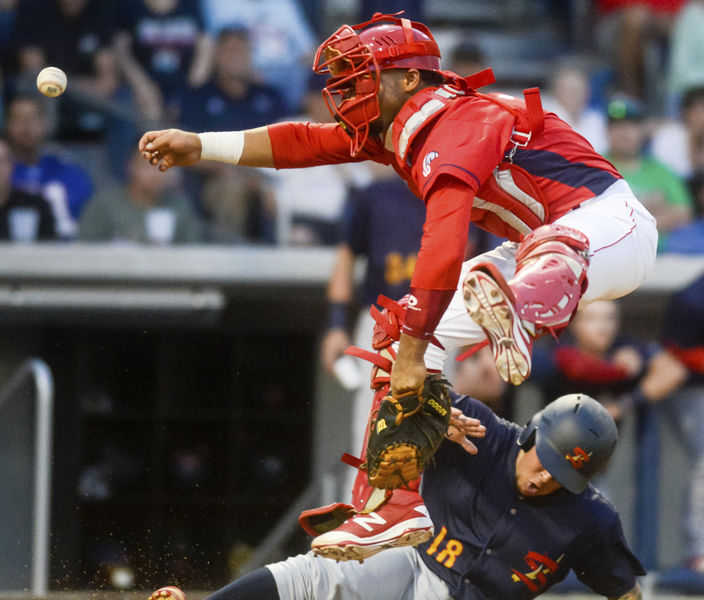 Williamsport’s Rodolfo Duran jumps for the ball as State College’s Joshua Lopez slides home during a 2017 game at BB&T Ballpark in Williamsport.

Shikellamy graduate Nick Dunn gets a hit for the State College Spikes against the Williamsport Crosscutters at Historic Bowman Field in game in 2018. The New York-Penn League announced that its season is indefintely postponed due to the COVID-19 pandemic.

Williamsport’s Rodolfo Duran jumps for the ball as State College’s Joshua Lopez slides home during a 2017 game at BB&T Ballpark in Williamsport.

Nick Dunn spent the last four months training as though he was on call, prepared to hop a plane and play baseball at the word "go."

The coronavirus outbreak had delayed his third season of professional ball but didn't otherwise affect Dunn's regimen. He worked out just as keenly in the months leading up March as he likely will for the next eight following Tuesday's announcement that there would be no Minor League Baseball season in 2020.

For now, though, the Shikellamy graduate can at least unpack.

"I've kind of been taking it a day at a time because it was very much an unknown if we'd get back or not," Dunn said. "I didn't hear too much, to be honest, and with how long it was taking the Major League stuff to get figured out, I wasn't very sure how good the outlook was for us. So I was pretty much treating it like we could go back any day because, realistically, that was the case.

"With things up in the air for the last four or five months, I was ready for anything at this point."

A week after Major League Baseball (MLB) revealed the timeline for its pandemic-shortened season, it declared "it will not be providing its affiliated Minor League teams with players for the 2020 season."

"These are unprecedented times for our country and our organization as this is the first time in our history that we've had a summer without Minor League baseball played," said Minor League Baseball President & CEO Pat O'Conner, who heads an association founded in 1901.

The Williamsport Crosscutters, a Class A short-season affiliate of the Philadelphia Phillies, are among the 261 Minor League Baseball teams affected by the decision. The club stated in a release that "the Crosscutters expect to again field a team under Major League Baseball's umbrella (in 2021)."

"While this difficult decision was not ours to make," Crosscutters Principal Owner Peter Freund said in the release, “we feel it was the right one, for players, coaches, front office staff, stadium workers and most importantly Minor League fans across the country.”

The framework of the upcoming MLB season provides for each team to field a 60-man roster during a training period (which begins today) ahead of Opening Day on July 23. That number will be trimmed to 30 players at the start of the season, reduced to 28 players after two weeks, and finish at 26 after four weeks.

The St. Louis Cardinals, who selected Dunn from the University of Maryland in the fifth round of the 2018 draft, have named 44 players who will train at Busch Stadium. The final 16 players are expected to train in Springfield, Missouri, home of the Cardinals' Class AA affiliate and Dunn's projected destination prior to the COVID-19 outbreak.

Though he didn't expect to be included on the 60-man roster, Dunn said he would likely receive instruction from the St. Louis organization in the coming days.

"When they cancelled spring training, I just picked up my offseason workouts where I'd left off," he said. "It was a little tough, a bit of a grind because I was working out for an unknown at that point. I was just looking at it as any day I could be called back.

"Every athlete is motivated by game days and game situations, but having self-motivation is a big plus — especially at a time like now when you're mostly working by yourself and holding yourself accountable."

Beyond running and lifting weights on his own, Dunn said he stayed game-ready with the help of family and friends. He spent hours in his home batting cage, in addition to hitting pitches from his father, John, and several area friends. John Dunn, a former Shamokin varsity baseball coach, also worked defensive drills with his second baseman son.

"It's a little challenging because it's hard to simulate real game speed," Nick Dunn said. "You can't simulate live at-bats. The only way to get work in like that is to have live at-bats."

Dunn hit .247 over 104 games last year for the Class A advanced Palm Beach Cardinals. He missed two weeks in the middle of the season due to injury, then rounded into form once healthy. He batted .295 over the final two months, and hiked his average 20 points with a .356 clip over the season's final two weeks.

In his first year of pro ball, Dunn hit .274 over 51 games for Class A short-season State College — where he was a New York-Penn League all-star — before closing the season with Class A Peoria.

"No matter where you're at in your career, you're always working to get to that next level. You have to be ready to prove yourself each year and figure out a way to progressing, keep improving," he said. "It's unfortunate that the season was cancelled, and this whole time has been pretty frustrating. At the same time, it's been nice to be able to spend more time with my family.

"I want to take the positives from it. I do what I love for a living every day. It could be a lot worse."