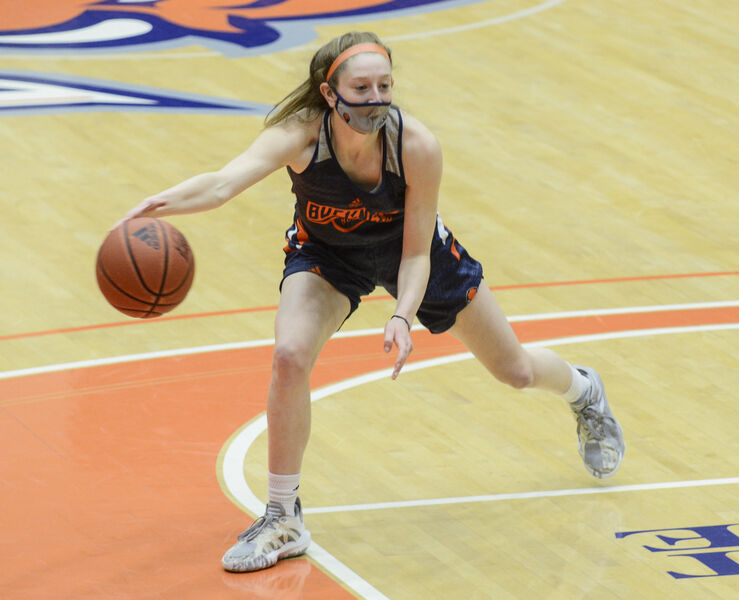 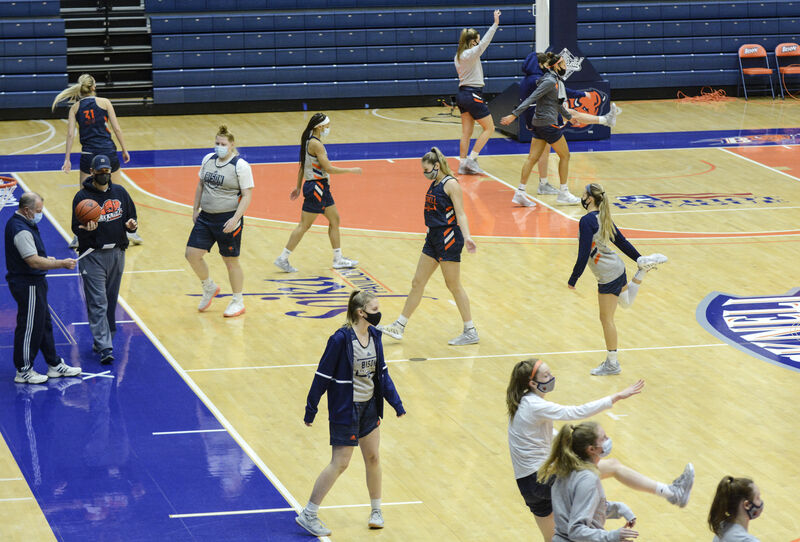 The Bucknell women’s basketball team warms up at the start of their practice on Wednesday. The Bison’s two-game set against Navy scheduled for the weekend was postponed Friday due to a positive COVID-19 test within the Navy program. 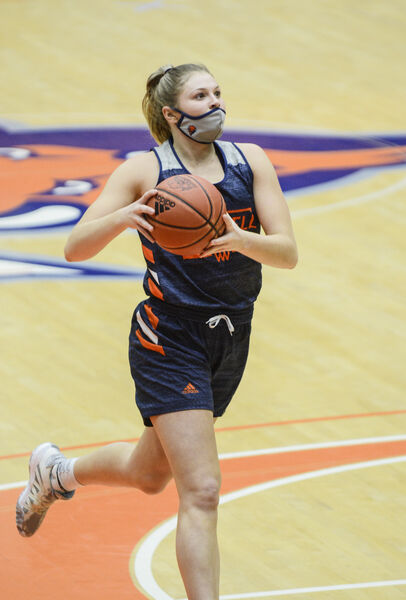 Bucknell’s Tessa Brugler eyes the basket on a drive during Wednesday’s practice. Brugler is one of four starters returning for the Bison this season.

The Bucknell women’s basketball team warms up at the start of their practice on Wednesday. The Bison’s two-game set against Navy scheduled for the weekend was postponed Friday due to a positive COVID-19 test within the Navy program.

Bucknell’s Tessa Brugler eyes the basket on a drive during Wednesday’s practice. Brugler is one of four starters returning for the Bison this season.

The end of last season was a whirlwind for the Bucknell women’s basketball team.

The Bison prepared to host a Patriot League tournament semifinal one March morning, then held a team meal to celebrate the end of the season that evening. Due to the coronavirus pandemic, the Patriot League and NCAA tournaments were canceled within hours of each other.

“There definitely is unfinished business,” senior Tessa Brugler said. “It’s something we don’t talk about much. We return four of five starters.”

Second-year Bucknell coach Trevor Woodruff said he wants his team focused solely on what’s ahead, which is a game against Navy to open a Patriot League-only regular season Saturday.

“In my opinion, if we have external motivations that push us to work harder than we normally would, we don’t work hard enough,” Woodruff said. “Last year was amazing, and the way it ended was heartbreaking. My goal as a coach is to get our brains where our feet are. Their feet aren’t waiting for Holy Cross in a semifinal; their feet are getting ready to play Navy.”

After earning the No. 1 seed in the Patriot League tournament each of the last two seasons, the Bison are once again Patriot League preseason favorites.

“We’re optimistic about our potential,” Woodruff said. “You look at what we have with talent and veterans returning; we believe we can be a really good product.”

That starts with Brugler and the rest of the senior class — Abby Kapp, Ally Johnson and Autumn Ceppi.

“A large amount of the burden falls to our senior group,” Woodruff said. “Those four seniors have been there, done that. They don’t just have experience, but championship-level experience. They’ve done it at a high level, seen it done, and know it’s their time. If that’s our starting point, we’re in pretty great shape.”

‘We have more options’

Kapp, who was named to the Patriot League preseason team, is the only returning Bison who averaged double-figure points last season. She scored 10.9 per game as a junior.

“Abby is just steady,” Woodruff said. “She’s talented, and she does a lot of things on the floor. You really get the same thing from Abby every day. As a coach and a teammate, you appreciate that. That consistency is what allows you to be really great.”

The biggest question mark for the Bison is how they will replace the production of Ellie Mack. Mack, who is now a graduate transfer at Oregon State, was named the Patriot League Player of the Year last season after averaging 15.0 points and 7.4 rebounds per game.

“We’ll do it by committee,” Woodruff said. “We don’t have another player with her mix of size, skill and athleticism. The players we put together can be a rough facsimile of Ellie. I think the returning players’ numbers will elevate. Taylor O’Brien’s numbers should elevate.

“I think (O’Brien is a) star that’s ready to blossom. I think she’s going to take up a lot of those numbers in terms of scoring and rebounding.”

Mack took more than 21% of Bucknell’s shots last season, but the Bison expect to be less predictable on offense this season.

“This year, we have more options,” junior Marly Walls said. “Coaches are going to be wondering who we’re going to. Last year, it was Ellie.”

The return of Walls will also benefit the Bison. She averaged 7.1 points through the first 15 games before a knee injury cut short her season.

“I’m cleared and ready to go,” Walls said. “I do have to wear the big, ugly, bulky brace, though.”

Woodruff said he’s been pleased with what he’s seen from Walls in the preseason.

“Marly looks like she did when she left,” Woodruff said. “She’s fearless. I have a history of having dealt with that type of injury before, and players are usually back physically well before they are mentally. The doctor says they’re ready to go, but there’s some trepidation because they remember the pain and the rehab.

“I didn’t notice that with her. The doctor said, ‘Go,’ and she went. She’s looked really good at times, and rusty at times. She’ll be a big piece for us at times this season.”

Woodruff said Ceppi is going to slide into the starting position vacated by Mack.

“Autumn might be the best defender we have,” Woodruff said. “We’ll slot her into the starting lineup, and we might be better defensively than we were last year.”

Behind the six juniors and seniors who have plenty of experience, the coach said he was expecting improvement from his group of three sophomores — Tai Johnson, Carly Krsul and Emma Shaffer.

“I would point to the entire sophomore class,” Woodruff said. “The old coaching cliche is that the biggest growth comes from your freshman to sophomore seasons. ... The whole sophomore group has taken a step forward. That gives us more depth than we had last year.”

One of the added challenges this season is starting the season with Patriot League play.

“It’s our first game, but it’s what can get us to the playoffs,” Brugler said. “Right off the bat, our first game goes into our seeding.”

Walls added she was a little nervous because the Bison haven’t had a chance to test themselves against any outside competition.

“Our out-of-conference games are usually tougher,” Walls said. “Opening against Virginia is different from opening against Navy. But there is pressure because it’s a Patriot League game and we do have a standard.

“We have a certain confidence coming in as Bucknell.”