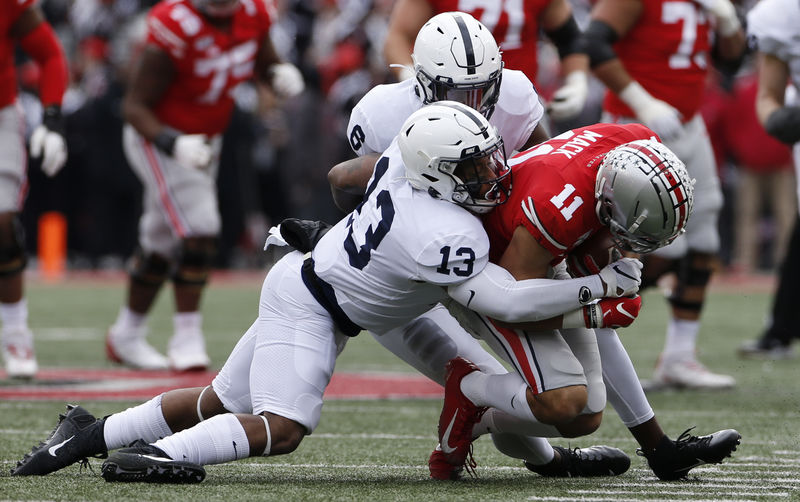 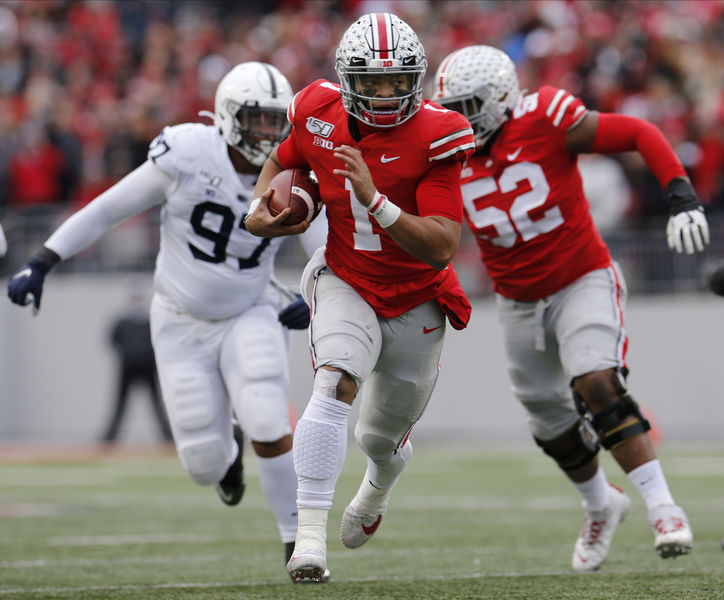 Ohio State quarterback Justin Fields, center, runs for a first down against Penn State on Saturday in Columbus, Ohio.

Ohio State quarterback Justin Fields, center, runs for a first down against Penn State on Saturday in Columbus, Ohio.

STATE COLLEGE — After finding itself in a 21-0 hole in the third quarter on Saturday, Penn State’s defense forced two turnovers that briefly swung momentum and allowed the Nittany Lions to trim the deficit to four points.

The Nittany Lions scored 14 points off those turnovers.

“It’s the mindset of the team and the culture we’ve built,” said Penn State linebacker Cam Brown, who recovered a fumble in the first quarter. “We know we’re not going to give up.”

“We feel like we played a great team,” Penn State defensive tackle PJ Mustipher said. “Great teams make plays, but what I think what we saw (Saturday) was we were able to make plays when we needed them, as well. Two huge turnovers to swing the momentum and give the offense the ball back, so I don’t think the defense was different at all.”

Buckeyes running back J.K. Dobbins ran for 157 yards rushing and two touchdowns. Dobbins had seven carries that resulted in gains of 10 or more yards.

Ohio State quarterback Justin Fields ran for a career-high 21 carries and tallied 68 yards. He was most effective on the quarterback draw, which accounted for six of his carries. Fields had four carries that resulted in 10 or more yards.

“You have to play a complete football game without any execution errors,” Mustipher said. “If we were perfect in every area, we would have won the ball game. But clearly we weren’t perfect, and we’ll have to take a look at it (Sunday) and see where we weren’t perfect at.”

Ohio State defensive end Chase Young returned to the field after a two-game suspension following an NCAA investigation for impermissible benefits. Young, who received widespread Heisman attention before his suspension, resumed his campaign in a big way.

“I thought early on we did a pretty good job of managing the impact,” Penn State coach James Franklin said. “Really probably up until the fourth quarter, whether it’s squeezing him with a back, whether it was sliding to him, whether it was mixing in the run game or throwing the quick game, but late in the game there where we were getting into third-and-long…I thought up until that point we had a pretty good job with that.”

Penn State hosts two-win Rutgers on Saturday for its regular-season finale and should conclude the regular season with a 10-2 record.

The Nittany Lions’ two losses appear to have disrupted their path to the Rose Bowl. However, an appearance in “The Granddaddy of Them All” could still be in play — but they’ll need some help.

Wisconsin and Minnesota play this week in what essentially amounts to a battle for the Big Ten West title and a berth in the Big Ten championship game.

A Minnesota win against Wisconsin and a loss to Ohio State in the Big Ten title game could be attractive enough to Rose Bowl representatives to offer the Golden Gophers and invitation to the Rose Bowl. Minnesota hasn’t played in the Rose Bowl in more than 50 years, and it holds the head-to-head advantage over Penn State.

A Wisconsin win against Minnesota followed by a loss to Ohio State in the conference championship game could also lure Rose Bowl representatives into inviting the Badgers out west for the holidays.

Should Minnesota or Wisconsin experience a blowout loss to Ohio State in the Big Ten championship game, the Nittany Lions could receive consideration from Rose Bowl representatives.

As of now, Penn State appears to be firmly in place to receive an invitation to the Outback Bowl on Jan. 1, where the Nittany Lions will likely face the SEC’s Texas A&M or Auburn. Depending on how the college football regular season unfolds, A New Year’s Six berth in either the Orange or Cotton bowls could be within the realm of possibility for Penn State.

The Nittany Lions have produced two Butkus Award winners. LaVar Arrington won the award in 1999, and Paul Posluszny claimed it in 2005.