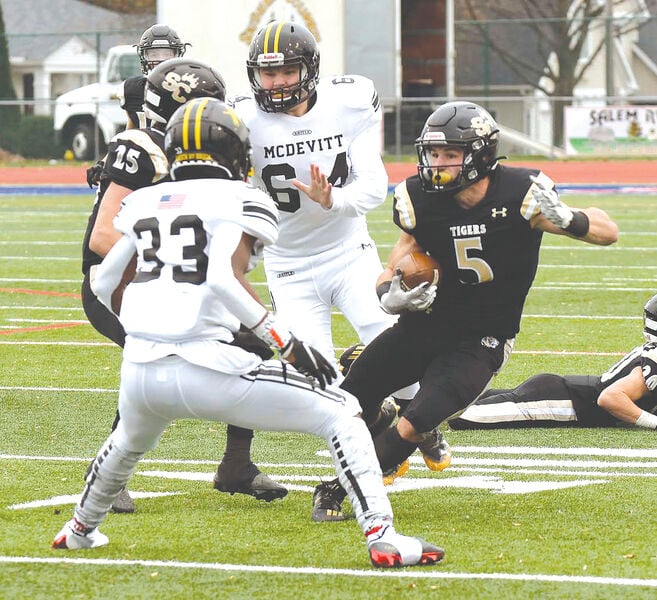 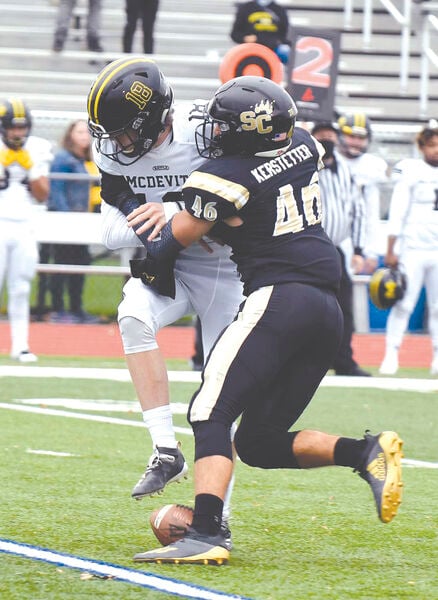 SELINSGROVE — While watching film to get a read on Bishop McDevitt’s quarterback, the Southern Columbia defense learned Nick Santo was accurate with plenty of weapons on the outside.

Two passes into Saturday’s state playoff game, Santo had 41 yards and a touchdown, and the Tigers were in a position they hadn’t been in all season — behind on the scoreboard.

“We knew we had to get pressure on him because he was an accurate quarterback,” Tigers linebacker Wade Kerstetter said. “We saw that throughout the playoffs last year, how important a pass rush was.”

Kerstetter and his defensive teammates may have had just two sacks, but their constant pressure turned a 70-percent passer into a 29-percent passer (9-of-31) in the Class 2A semifinal. Meanwhile, Southern Columbia junior Gavin Garcia ran for a career-high 204 yards and four touchdowns in a 42-14 win over the Lancers.

“One of our keys coming in was getting pressure on that quarterback. I think that was a big key for us,” Southern Columbia coach Jim Roth said. “We never let them drive the ball consistently.”

The Tigers (11-0), who won their 59th straight game, will face Wilmington in the PIAA Class 2A final for the third time in four seasons — all Southern Columbia victories. The game is tentatively set for 11 a.m. Saturday at HersheyPark Stadium.

Bishop McDevitt finished its season at 4-2, losing the final game in the program’s history. Bishop McDevitt found out Wednesday it will close at the end of the school year.

Corey Wright-Downing ripped off a 51-yard kick return to start the game for the Lancers. Santos hit Khyrie Isaac for a 28-yard pass on the first snap, a ball Tigers cornerback Jake Davis got his hands on before Isaac caught the tip. One play later, Emmanuel Sim caught a quick slant for a 13-yard score and a 6-0 Bishop McDevitt lead with 10:04 left in the first quarter.

Southern Columbia was forced to punt on its first possession despite Garcia’s 19-yard run on the first Tigers’ play from scrimmage. It looked like the Tigers were in for a fight.

“People say, ‘Hey, you’ve been to the state final four years in a row; this should be old hat.’ However, it’s much different to come in with us leading by a lot and playing in these types of games, to where we’re relying on you in a state semifinal,” Roth said. “I just think we were a little tight, a little nervous, early in the game.

“It was good for them to work through that.”

The Tigers’ defense settled in, forcing a Bishop McDevitt punt. Garcia’s second carry of the game resulted in a 58-yard TD run, and Isaac Carter’s PAT made it 7-6 with 5:47 left in the first quarter.

The Lancers’ defense provided some tough sledding for the Tigers. They relied on the big play early.

Garcia added another long TD run of 52 yards in the second quarter. Another score was set up by Jake Rose’s one-handed snatch of a pass out of the air for 33 yards, and Southern took a 21-6 lead at halftime.

“They were tough to run consistently against. They did so many things up front in addition to having eight or nine guys in the box,” Roth said. “They weren’t honoring the pass a whole lot.

“As the game went on, we did a better job of being consistent.”

Southern Columbia took control of the game with back-to-back touchdown drives to open the third quarter. Garcia raced for a 34-yard TD where he bounced off a tackle so hard, it pushed him outside and clear of the defense.

Davis then tied 2017 graduate Cam Young for the Southern Columbia school record with his 17th career interception, setting up Liam Klebon’s 41-yard TD pass to Braeden Wisloski to push the lead to 35-6 with 7:15 left in the third quarter.