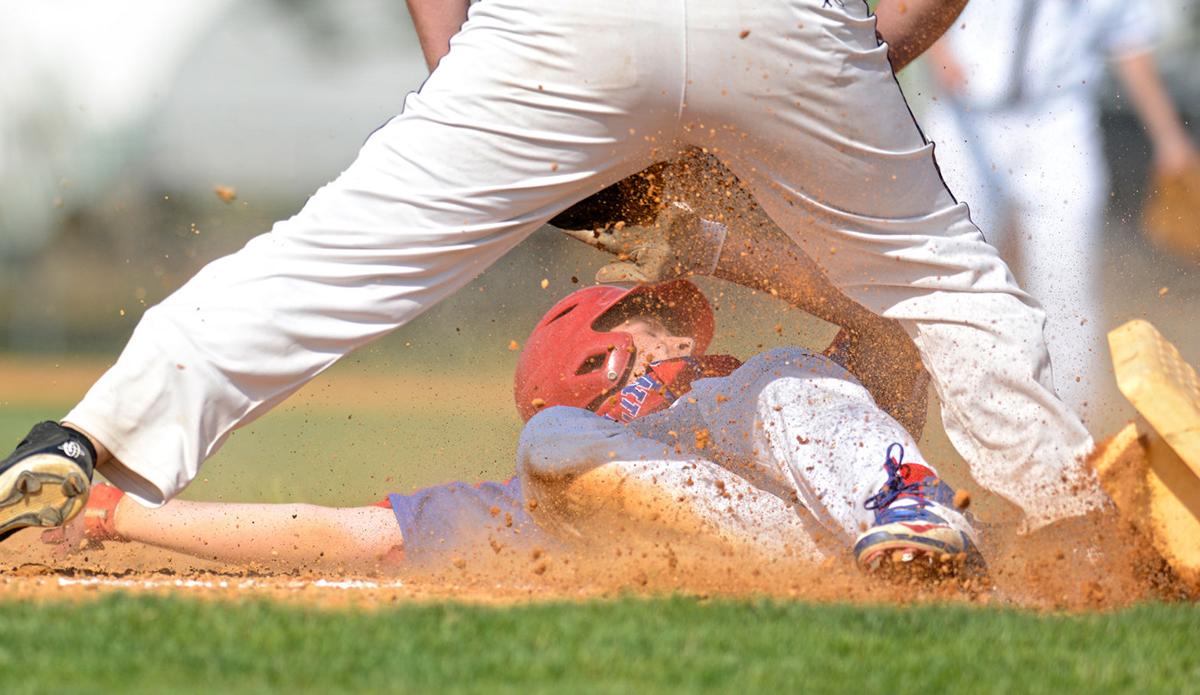 Selinsgrove's #46 gets tagged out at third base by Shikellamy's #23 during Tuesday's playoff game. 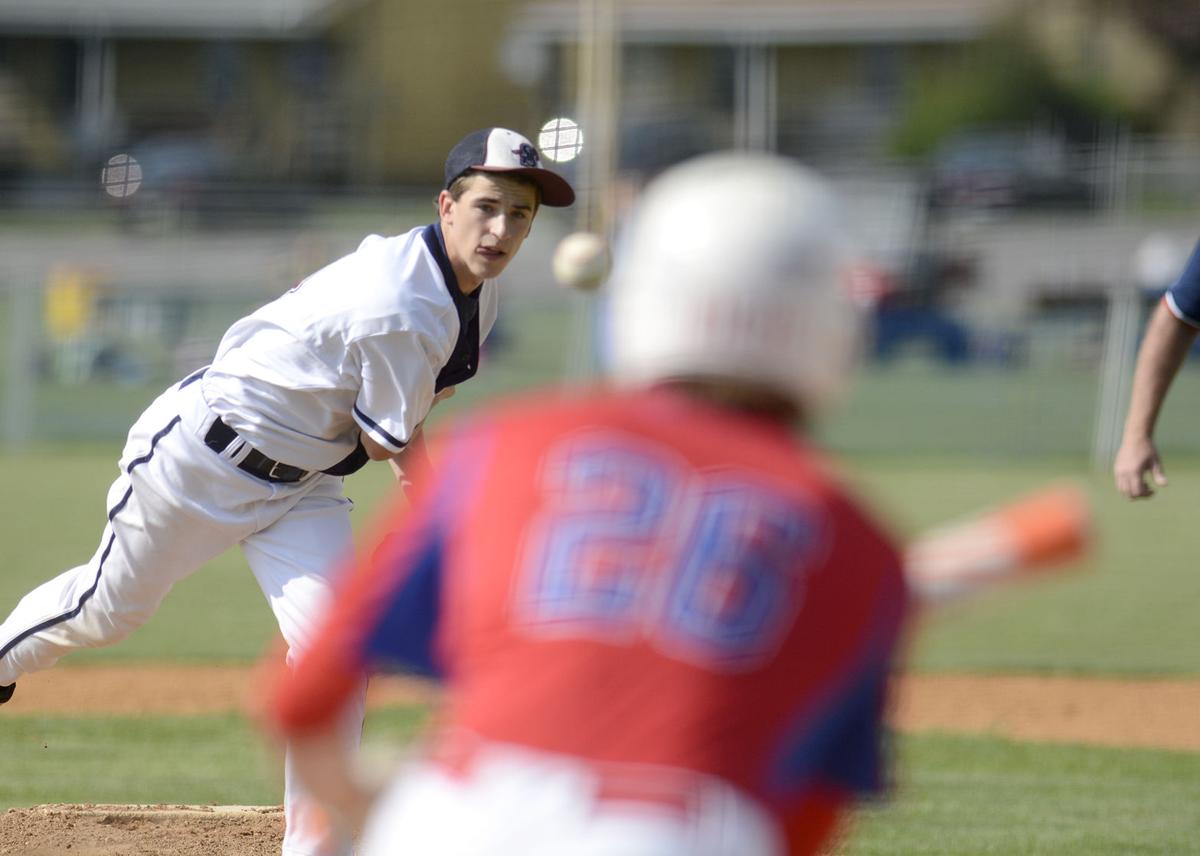 Shikellamy starting pitcher .... throws a pitch to Selinsgrove's #26 who was attempting a bunt during Tuesday's playoff game.

Selinsgrove's #46 gets tagged out at third base by Shikellamy's #23 during Tuesday's playoff game.

Shikellamy starting pitcher .... throws a pitch to Selinsgrove's #26 who was attempting a bunt during Tuesday's playoff game.

SUNBURY — Colby Lahr was stunned almost to the point of being numb.

Shikellamy was just two outs from its first district playoff win in five years when cross-river rival Selinsgrove made good on its last scoring threat.

Nine-hole hitter Ben Kuhns laced a two-run single past a drawn-in infield that vaulted the Seals into the lead very suddenly in the seventh inning.

“I was definitely stunned,” said Lahr, one of the Braves’ seven seniors, six of whom were on the field. “It was not a good feeling at all. It hit hard and came quick. I wasn’t expecting that to happen — not at all.”

The Braves had one shot to save the most successful varsity season in their careers and the tenure of head coach Bobby Felmy, and they got it done.

Matt Snyder singled to left field. Kyle Leitzel lofted a ball high to right that twisted in the wind and fell for an RBI double. Lahr then lined a hit to the outfield that scored the game-winner and triggered a flood of euphoric teammates.

“There was just a lot of poise in our guys in that seventh inning,” said Felmy. “We calmed down, stayed with it and just swung the bats. That’s the first time I’ve seen these guys battle their butts off like that, when down, especially in the seventh inning of such a big game. I’m just really proud of them.”

With the 3-2 win, Shikellamy advanced to Friday’s quarterfinal round at Bowman Field in Williamsport. The third-seeded Braves (15-6) play No. 2 Mifflinburg (15-4) at 4:30 p.m. for a berth in the District 4 Class AAA title game on May 27.

Selinsgrove, which was no-hit in two of its last three games and had the district’s bare-minimum qualifying mark, scared its archrival like not before in a six-game series losing streak.

“We’ve had some gutsy performances to beat some good teams this year, but that one’s at the top ... there’s no doubt,” said Selinsgrove coach Brent Beiler.

Seals junior righty Tyler Showers opened with three strong innings, working around a leadoff walk in the second and a two-out Snyder hit in the third with nothing but ground-ball outs.

In the home fourth, Shikellamy’s second look at him, Maryland recruit Nick Dunn shot a first-pitch fastball back through the middle and promptly stole second base. Dunn was running again when Blake Bettleyon ripped a single through the left side of the infield for a 1-0 lead.

Showers, though, got back-to-back strikeouts to strand two Braves in the fourth, then left a runner at third base in the fifth, and kept the bases loaded in the sixth.

Selinsgrove (10-11) also stranded a bushel of runners against Leitzel. The Seals got leadoff batter Isaiah Rapp to third base in the first inning; created a second-and-third jam with an infield error and Aaron Zechman ground-rule double with two outs in the third inning; and bunted Rapp to second following his leadoff hit in the sixth. Each time the Braves made good play to escape, including Dunn’s slick stop of a short-hop grounder up the middle that saved two runs in the third.

Trailing 1-0 in the seventh, Colin Hoke started the Seals’ rally with a one-out liner to left-center. Ian Weaver then hit a grounder to the right side that was good enough to advance Hoke. However, the ball was thrown past first base, moving both Seals into scoring position.

Felmy lifted Leitzel for his closer, Dunn, who was 3-0 with a 1.27 ERA against Selinsgrove over the last two seasons. He faced Kuhns, who reached on an error and struck out in two previous trips. After taking two balls, the junior jumped at a fastball and shot it through the Braves’ drawn-in infield.

“Nick’s a fantastic pitcher — throws hard and gets a lot of Ks; that is not the guy I wanted to see on the mound,” said Beiler. “I just wanted (Kuhns) to put the ball in play and see what happens. That’s all I wanted him to do. With his speed, they were going to have to throw him out. He did more than that, and that was just ... wow! It was awesome.”

Dunn rebounded to quickly end the inning and get the shell-shocked Braves to the plate.

“That was a rough inning,” said Felmy. “I’m glad they only scored two.”

Snyder worked some nine-hole magic of his own with a solid leadoff hit that shook the Braves from their stupor. Leitzel then launched a ball to deep right that turned around the fielder and dropped. Snyder scored on the play, and the throw back to the infield got away, allowing Leitzel to take third. Lahr followed with a bullet that clipped the outstretched glove of Rapp at shortstop on its way to the outfield grass.

“We did not want what happened there in the seventh to end our chance,” said Lahr. “So we were ready to get in there and hit, get the lead back and win it.

“When (Snyder) got on, I knew it was going to start rolling. That really got us going.”

“I’ve had a lot of playoff games, and there’s a couple that stand out, but I guarantee that this is the game that will stand out most as a loss,” said Beiler. “It stinks that it went down that way ... but I will cherish this game. For those guys to come together like that (in the seventh) says a lot. I’m very proud of our team.”