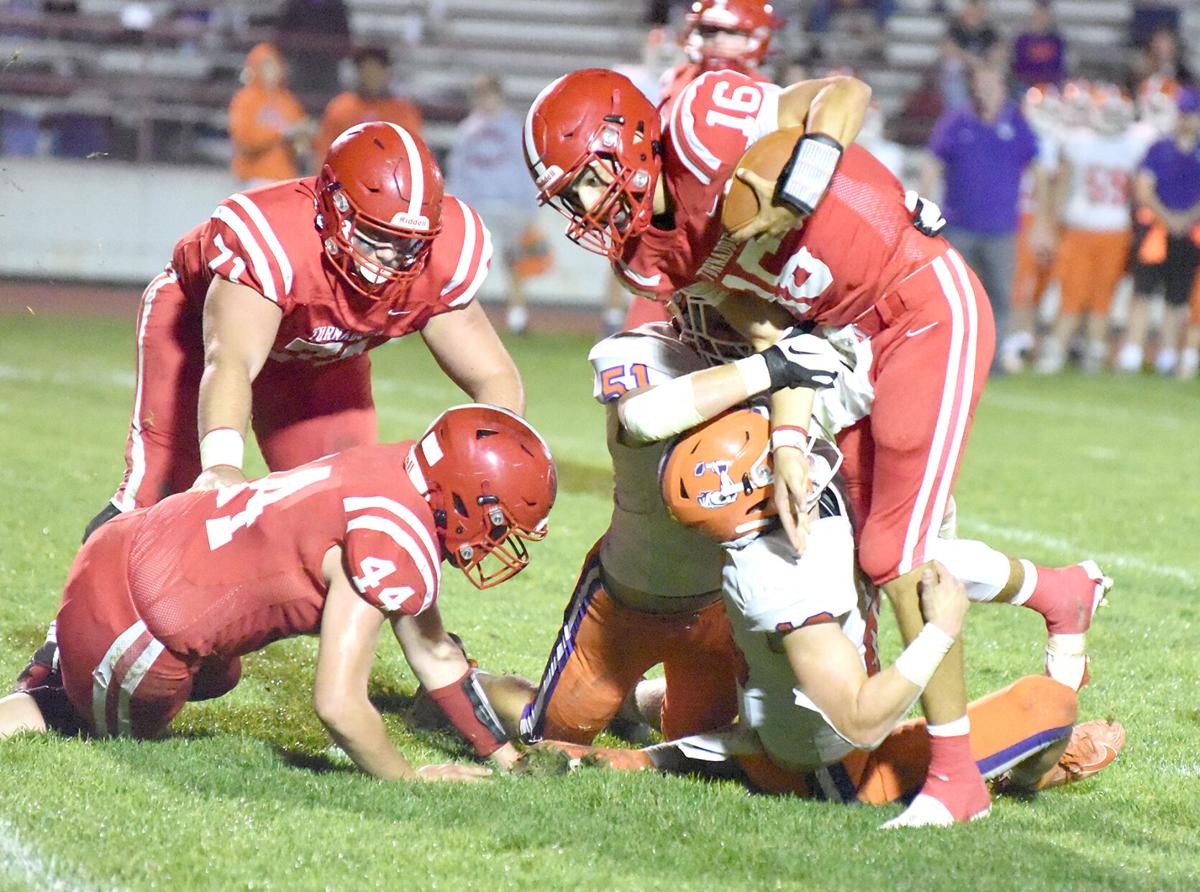 Mount Carmel quarterback Pedro Feliciano tries to run through a pair of Danville tacklers during the Red Tornadoes’ win Friday. 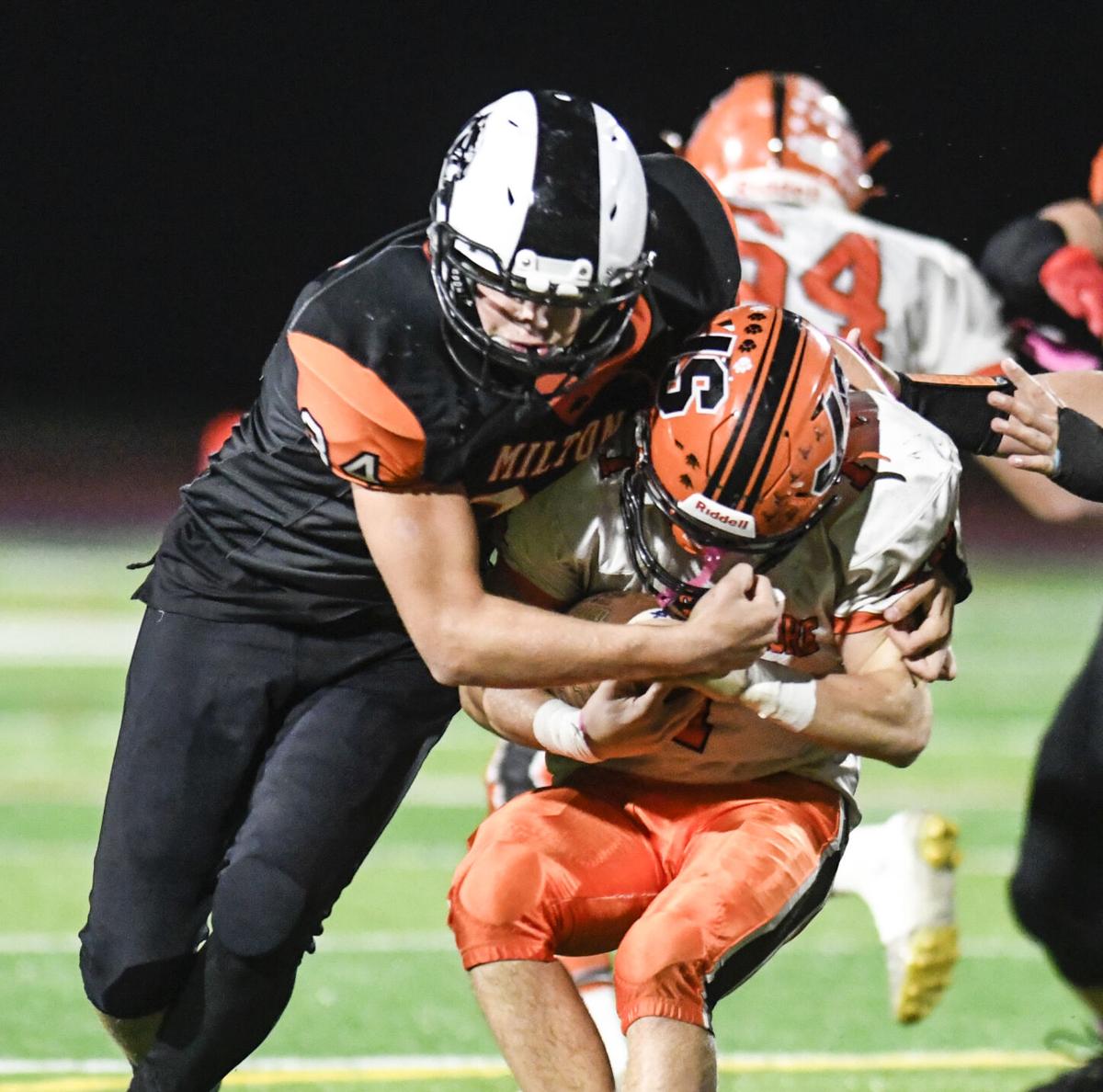 Mount Carmel quarterback Pedro Feliciano tries to run through a pair of Danville tacklers during the Red Tornadoes’ win Friday.

MOUNT CARMEL — Matt Kelley and his offensive line teammates were expected to be key to Mount Carmel’s success this season.

“Everybody was bummed that we missed (much of) the last year, but we wanted to come back and show what we are capable of,” Kelley said. “(Last season) didn’t leave a good taste in our mouths. This (season) is really important to us.”

Mount Carmel was 2-2 at this time last season, including a forfeit loss to Warrior Run, before it cancelled its final three games due to a hazing investigation.

On Friday night, a District 4 Class 3A title contender visited the Silver Bowl for the second time this year. Neither team had an answer for the Red Tornadoes’ offensive line and ball-control offense.

Montoursville visited on Sept. 17 and left with a 21-7 loss. Danville entered Friday’s contest 5-1, and left with a 34-21 loss to the Red Tornadoes, a game Mount Carmel led 28-7 at halftime.

Mount Carmel ran the ball 55 times for 301 yards in its most recent victory — the program’s state-record 873rd all-time — including running out the final 6:16 of game clock, after the Ironmen had clawed within two scores.

“All the hype around our team — the offeseason and all of the preseason — was about our offensive line. We have some dogs up front,” said Mount Carmel running back Julien Stellar, who ran 18 times for 125 yards and two scores Friday. “There are some big guys in front of me, and all credit to them. I couldn’t do anything without them.

“This is the best group I’ve ever run behind.”

In this age of spread offenses and lots of passing, Mount Carmel’s best play against the Ironmen was quite a throwback.

Ryan Weidner is a 6-foot-2, 220-pound fullback for the Mount Carmel, and he’s increasingly become part of the offense.

Weidner had just five carries on the season before Friday’s game, but he had 10 rushes for 64 yards against the Ironmen. All 10 carries came on a direct snap, where Weidner would follow Kelley (330 pounds) and Nestico (260 pounds).

That’s 810 total pounds rushing at a defense. Even when Danville defended it well, the Red Tornadoes gained 4 yards.

Speaking of Kelley, he had an eventful first half for the Red Tornadoes on Friday.

First, he had his first sack of the season on Danville’s first play from scrimmage.

The junior also had his first career interception when Nestico tipped a screen pass into his hands at the line of scrimmage. He rumbled 7 yards to the Danville 3 to set up a touchdown that made it 14-0.

“Nick opened it up for me with the deflection,” Kelley said. “I just had to grab it out of the air.”

The junior also had to take some ribbing from his teammates and coaches for not getting into the end zone.

“The coaches came in at halftime and asked me, ‘How could you not get 4 more yards?’”

Then, late in the first half, Kelley recovered a fumble on a drive that ended with a fake field goal for a touchdown with 10 seconds left that gave Mount Carmel a 28-7 lead.

Thomas Davitt carried 7 yards to the Danville 20 before fumbling the ball. Kelley was right there to hop on the ball and save the drive.

Jersey Shore made news earlier this season when it ran 91 offensive plays in a game. The Bulldogs had 60 snaps in Friday’s 62-7 win at Milton, which is still a robust clip of 15 per 12-minute quarter.

Still, Jersey Shore coach Tom Gravish would have liked to cut the amount of time his squad took between plays.

“We didn’t run it as fast as we normally do. They kind of scaled us back a little bit. We were in a position score-wise where we didn’t really want to get in a battle with the officials over it,” Gravish said. “We ran it five or six seconds slower here than we usually do. We think we’re in good shape as far as our physical conditioning is concerned. We practice at an even faster tempo than we play at.

“The guys are doing a good job with it. (Quarterback) Brady Jordan is doing a good job of picking up the signals, changing some plays and ad-libbing a few other plays. Our guys have been around each other for a while, and even though some of them are younger, we put in a lot of time this summer.”

Although Jersey Shore keyed on Doyle, limiting him to 20 yards on 14 carries, the Black Panthers were still able to generate 135 yards on the ground.

Ashton Canelo, a senior, led Milton with 56 yards and a touchdown on 10 carries, while quarterback Xzavier Minium gained 43 more on six runs.

Black Panthers coach Phil Davis said he plans to continue using Canelo as a second option in his backfield to compliment Doyle.

“We have two guys back there that we can really rely on,” Davis said.