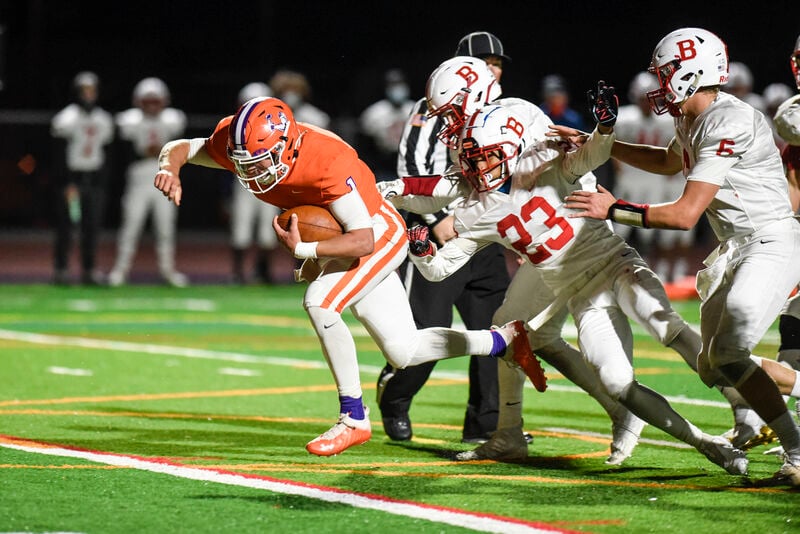 Danville’s K.J. Riley breaks through the Bloomsburg defense and scampers into the endzone for a touchdown during Friday’s game. 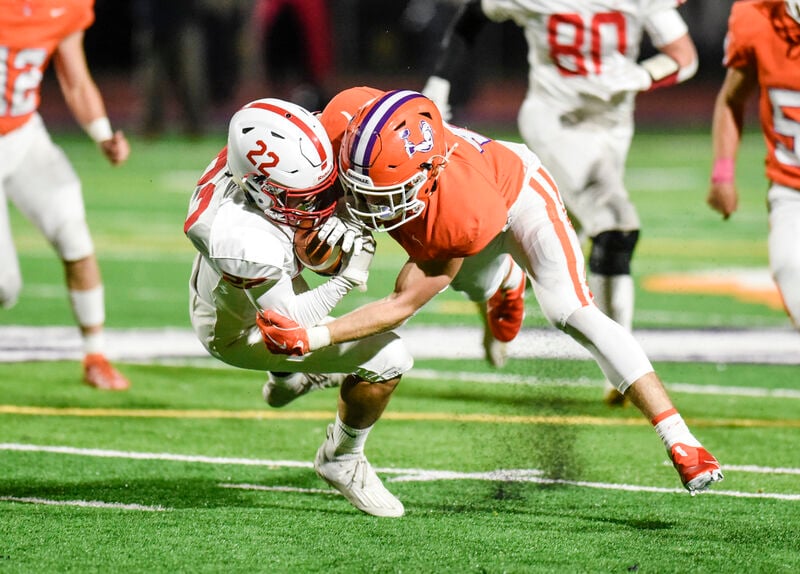 Danville’s Ian Persing lays a big hit on Bloomsburg’s Damon Rasmussen II for a loss on a reception during Friday’s game. 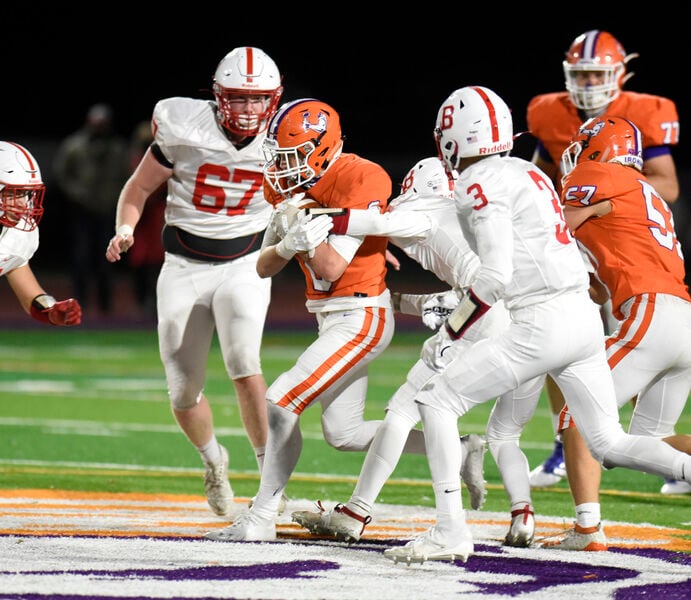 Danville’s K.J. Riley breaks through the Bloomsburg defense and scampers into the endzone for a touchdown during Friday’s game.

Danville’s Ian Persing lays a big hit on Bloomsburg’s Damon Rasmussen II for a loss on a reception during Friday’s game.

DANVILLE — K.J. Riley has had a wonderful senior season as Danville’s quarterback, but he’s human, and on Friday night, he needed a bit of help from his defense.

Riley’s first pass of the game against Bloomsburg was intercepted by Damon Rassmussen and returned to the Danville 1-yard line, giving the Panthers a golden opportunity to take an early lead and steal momentum from the Ironmen.

“We’ve got to make plays. We’ve got to back our teammate up. He made a mistake, but we’ve got to pick him up,” Danville defensive lineman Brady Hill said. “We have to do our thing.”

After stacking up the Bloomsburg quarterback on a sneak on first down, Hill stripped and recovered a fumble on his own 2-yard line to stymie the drive.

Danville’s defense was outstanding all night, limiting Bloomsburg to just 21 total yards and one first down as the Ironmen rolled to a 46-0 win, and possession of the Judy Price Trophy.

“The defense was outstanding. They were really, really good,” Danville coach Mike Brennan said. “We’re excited about our effort.”

“We have been dialed in (on defense),” Hill said. “We are all locked in together; we are one family.”

Danville’s defense never let the Panthers get on track. Bloomsburg’s longest rush — a 6-yard run on fourth-and-16 — came in the mercy-rule portion of the game during the fourth quarter, and the Panthers ran just 32 plays to Danville’s 67.

The Ironmen jumped on the Panthers quickly, scoring three first-quarter touchdowns, including a 98-yard drive for the first score of the game after Hill’s fumble recovery. It took just eight plays to cover 98 yards, the big play coming when Riley hooked up with Carson Persing for a 44-yard gain to the Bloomsburg 1. After the Panthers stuffed the first run, Riley scored on a quarterback draw for a 7-0 lead with 5:49 left.

Gabe Benjamin then recovered a Nasir Heard fumble on Bloomsburg’s next offensive play, and Riley and Jagger Dressler took advantage, hooking up for a 31-yard scoring strike with 3:25 left in the first quarter.

Following the score, Riley recovered his own onside kick and hit Carson Persing for a 37-yard gain, and a 15-yard pass for a touchdown. Neither PAT was good, but Danville took a 19-0 lead with 42.8 seconds left in the first quarter.

Bloomsburg picked up its lone first down on its next drive, but was forced to punt. The Ironmen went 75 yards in seven plays capped by Persing’s second touchdown catch of the first half, this time from 20 yards out on the first play of the second quarter. Persing had 10 catches for 178 yards in the first half, finishing the game with 11 grabs for 180 yards. The 11 catches is a career-high, topping the eight he had in last week’s win over Central Columbia.

“We knew coming into the game kind of what they were going to do. Coach Brennan and their coach (Mike Kogut) are really good friends, so we didn’t expect (Bloomsburg) to change much defensively,” Persing said. “We knew whatever (defense) they come out in, we had stuff put together that would work.”

Both Persing and Dressler took advantage of double moves to make themselves wide open. Dressler had five grabs for 69 yards and two scores. Riley finished with 280 yards passing and four touchdowns.

“I like running double moves, and I know Jag likes to run them too,” Persing said. “It gives us a shot to score.”

Riley added an 8-yard TD run to cap a drive that burnt 8:11 off the third-quarter clock, and his second touchdown pass to Dressler in the third quarter to put the game into the mercy rule. The Ironmen blocked a fourth-quarter punt to set up the game’s final score, a 1-yard TD plunge by freshman running back Aaron Johnson.