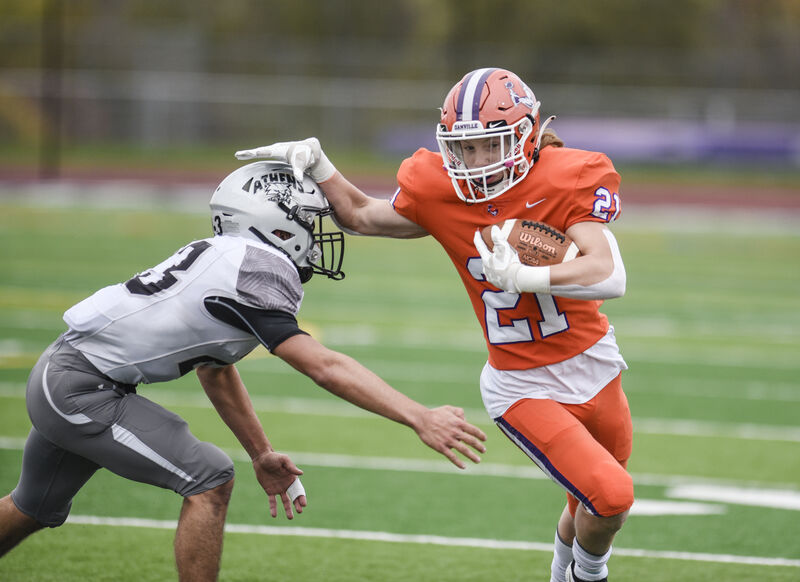 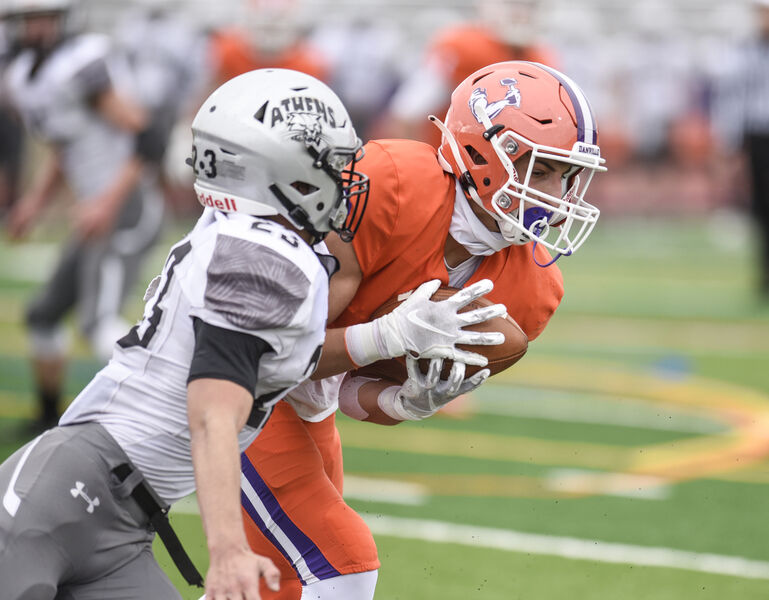 Danville’s Jagger Dressler makes a catch for a touchdown past Athens’ Shayne Reid on Saturday. 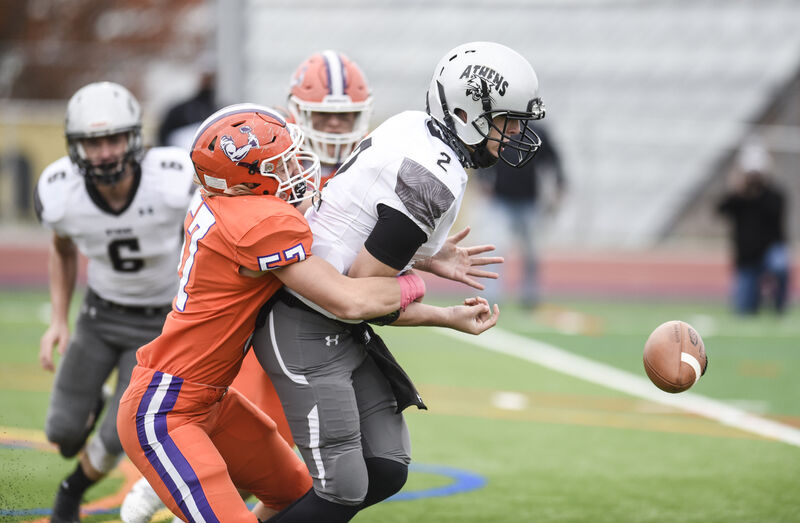 Danville’s Gabriel Benjamin strips the ball away from Athens quarterback Jim Lister in the backfield during Saturday’s game.

Danville’s Jagger Dressler makes a catch for a touchdown past Athens’ Shayne Reid on Saturday.

Danville’s Gabriel Benjamin strips the ball away from Athens quarterback Jim Lister in the backfield during Saturday’s game.

DANVILLE — A week off and an early afternoon start seemed to have all the ingredients for a slow start for Danville on Saturday in a District 4 Class 3A semifinal against Athens.

Nor should he been.

K.J. Riley hit a wide-open Carson Persing for a 61-yard TD on the first play from scrimmage, and the Ironmen had their second straight shutout as Danville knocked off Athens, 43-0, at Ironmen Stadium.

“We knew we had to come out of the blocks fast,” Riley said. “We had to get out offense going and our defense going.”

Danville (7-1) advances to the District 4 Class 3A championship game against Montoursville (8-0), a 57-28 winner over Loyalsock in the other semifinal. The Warriors dealt the Ironmen their lone loss of the season, 42-28, on October 2. Athens finishes its season at 5-2.

The Wildcats’ plan for Persing was evident on the first play, trying to double cover the sophomore standout. However, he got 5 yards behind the double coverage. One perfectly thrown Riley pass later, the Ironmen led 6-0, just 19 seconds into the game after a bad snap on the extra point.

“It’s awesome to see (Carson) open all the time,” Riley said. “It’s hard for teams to cover him. They are throwing two and sometimes three guys toward him, but he always seems to be open.”

Things didn’t get much better for Athens as Gabe Benjamin came free from Athens’ quarterback Mason Lister’s blindside. Benjamin’s strip sack led to Brady Hill’s fumble recovery at the Athens 16. The Wildcats held Danville to 2 yards on the drive, and Riley’s 31-yard field goal made it 9-0 with 10:43 left in the first quarter.

A quick three-and-out by Athensgave the ball back to Danville. The Ironmen went on a five-play, 62-yard drive capped by Riley’s 20-yard touchdown pass to Persing. Danville led 16-0 five minutes into the contest.

On the next Athens offensive series, Ian Persing had a tackle for a loss, and batted a pass down on a blitz to help the Ironmen force another three-and-out. This time it took the Danville offense five plays to score. Riley threw a 5-yard touchdown pass to Jagger Dressler to make 23-0 with 3:49 left in the opening quarter.

“We’re starting to really get comfortable in our roles (on the defense),” Danville middle linebacker Mason Raup said. “Two shutouts in a row is great momentum for the championship game.”

Athens finally got a first down on its next possession, but Dressler sacked Lister on third-and-1 for a 7-yard loss to force a punt. Danville took over on its own 13. It took them just three plays — a 34-yard completion to Persing, a 21-yard run by freshman Aaron Gordon and a 19-yard completion to Dressler — for the Ironmen to get to the Athens 13. Freshman Hayden Winn caught his first career TD pass from Riley with 10:30 left in the second quarter to make it 30-0.

Danville added another touchdown less than 30 seconds later. Zach Gordon picked off a Lister pass to set up an 8-yard connection from Riley to Ian Persing — Riley’s fifth touchdown pass — to make the score 37-0.

The Ironmen defense never let Athens get on track. Danville limited Athens to48 yards in the first half, and 137 for the game. Danville had four sacks of Lister, including two by Benjamin. The Ironmen have allowed seven points in their last 12 quarters of action.

The only touchdown of the second half came late in the third quarter. Raup blocked his second punt of the game, and C.J. Outt plucked it out of the air at the 15 and returned it for a touchdown.