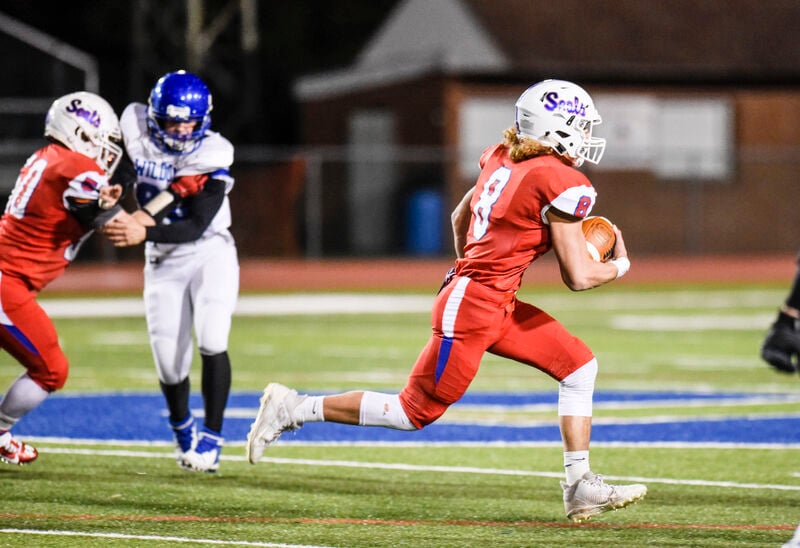 Selinsgrove’s Coy Bastian heads to the right side of the defense on his way to a touchdown in the first half of Friday’s game against Central Mountain. 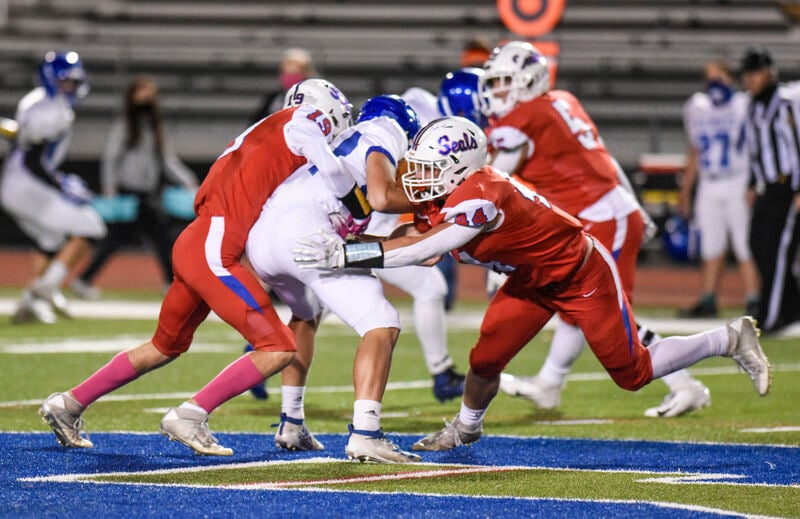 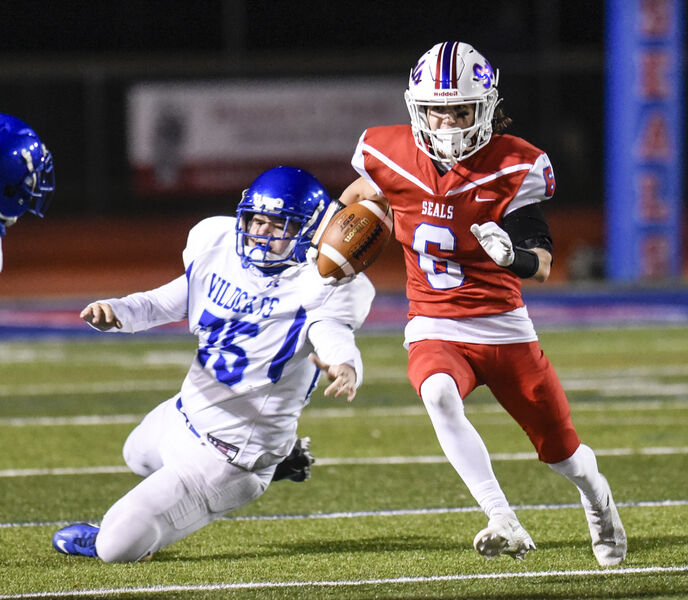 Selinsgrove’s Brett Foor gets by Central Mountain’s Garrett Hendricks on a kick return during Friday’s game.

Selinsgrove’s Coy Bastian heads to the right side of the defense on his way to a touchdown in the first half of Friday’s game against Central Mountain.

Selinsgrove’s Brett Foor gets by Central Mountain’s Garrett Hendricks on a kick return during Friday’s game.

SELINSGROVE — Something about the way Central Mountain opened the second half Friday suggested Selinsgrove was in deep trouble.

The Wildcats marched 68 yards on 10 plays, facing only one third-down situation, to score the go-ahead touchdown. It was a matter-of-fact drive behind a large offensive line capable of taking over the game.

So when the Seals missed a field goal late in the third quarter, Central Mountain had an opportunity to score the knockout.

Brandon Hile beat the Wildcats to the punch.

Selinsgrove’s junior outside linebacker had three key tackles for loss in the fourth quarter, including a pair of sacks, to jolt the visitors off-kilter. That allowed Kyle Ruhl’s 22-yard field goal with 5:36 left to be the difference in the Seals’ 9-7 win that avenged a loss one month earlier.

“The thing I was most proud of was their effort. Those guys battled,” said Selinsgrove coach Derek Hicks. “It would have been so easy to fold when they came out after halftime, (and) put together a seven-, eight-minute drive. They scored, but nobody hung their heads. The offense came out, kept fighting and got into field-goal range.

“And credit to Kyle — he missed one early but didn’t let it get to him and made the one that counted.”

The Seals (3-3) were beaten at Central Mountain, 7-3, on Sept. 18. The rematch at Bolig Stadium, brought about by COVID-19 restrictions mandating Heartland Athletic Conference opponents, did not count in the Division I standings headed by Jersey Shore.

Selinsgrove won its second consecutive game — and firmed up its District 4 Class 4A playoff standing — with defense. The Seals limited Central Mountain junior Ryan Pentz to 70 rushing yards (41 less than his per-game average) on 21 carries, and they allowed one score or less for the fourth time in six games.

Senior lineman Nate Schon’s return from a knee injury was a significant boost, as he keyed an aggressive front that got consistent penetration and pressure from between the tackles. Late in the game, though, Hile did all his damage blitzing off the edge.

“Nate Schon played a huge role in that. He got pressure off that tackle, and I just came right off the edge,” Hile said. “One of my coaches was telling me the whole time, ‘Get up field and go in.’ I started doing that and it worked.”

It started with a tackle of Pentz for no gain early in the fourth quarter with Central Mountain leading 7-6. The Wildcats triggered second-and-4 from their 36 when Hile fired off the right side and bolted down the line of scrimmage to drop Pentz. The Wildcats committed consecutive procedure penalties to fall into third-and-14 before Hile leveled quarterback Brett Gerlach, again off the right edge, for a 7-yard loss that forced a punt to midfield.

Selinsgrove responded with a drive to the 5-yard line, and Ruhl belted the go-ahead 22-yard field goal from the left hash on fourth-and-1.

Central Mountain (4-2) had more than five minutes to answer, and a miss-kick on a squib kickoff gave the Wildcats the ball near midfield. They drove to the Seals 38 — fortunate to recover a fumbled snap on second down — when Hile recorded his second sack. Hile darted off the left edge and fought through fullback Micah Walizer, who tried to slow him by wrapping an arm around his neck, before looping back to drop Gerlach behind the line.

“It was just a huge game, coming down to the end, and I knew I had to make a play,” said Hile. “I got off (Walizer’s block), kept my balance and made a good play. It hurts (a penalty) wasn’t called, but I made a good play out of it and I’m happy about it.”

“Brandon’s having a heckuva year,” Hicks added. “He’s an athlete, he understands the game, and he’s a competitor. With something like that play, when he knows he’s a got a shot at a sack, he’s going to battle through it. That’s just him.”

The Wildcats converted with a perfect slant pass into coverage for 13 yards on fourth-and-8. Seals safety Teague Hoover later knocked Pentz out of bounds a yard shy of a first down, and Central Mountain’s Tyler Weaver pulled a 34-yard field goal attempt wide with 48 seconds to play.

At the start of the game, Selinsgrove forced three first-quarter punts ahead of quarterback Coy Bastian’s 67-yard touchdown run on the final snap of the period. The senior kept the ball to the left side of the formation, cut toward the middle of the field, and then made his way to the sideline without a defender laying a finger on him.

Bastian’s game-high 102 rushing yards were 1 off his season total entering the game.

“I think it all started with the line,” Bastian said of the TD. “Our center blocked a kid 10, 15 yards downfield, and I saw a hole for a cutback and then everybody — all the way down the field to the 5-yard line — was blocking. So that was huge early in the game to get the energy flowing. That’s what we needed.”