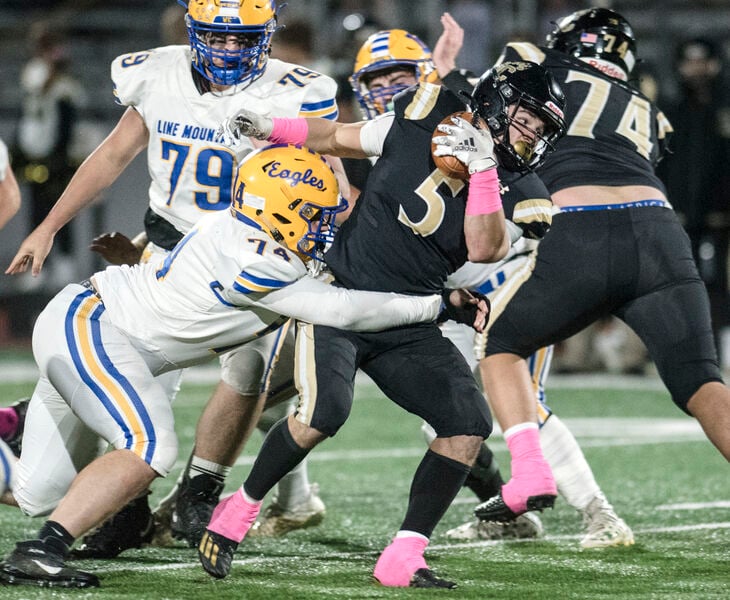 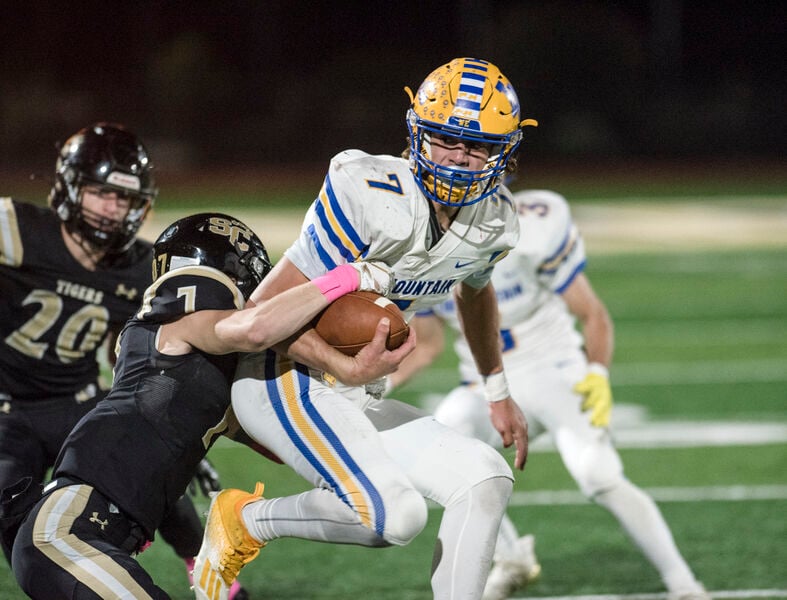 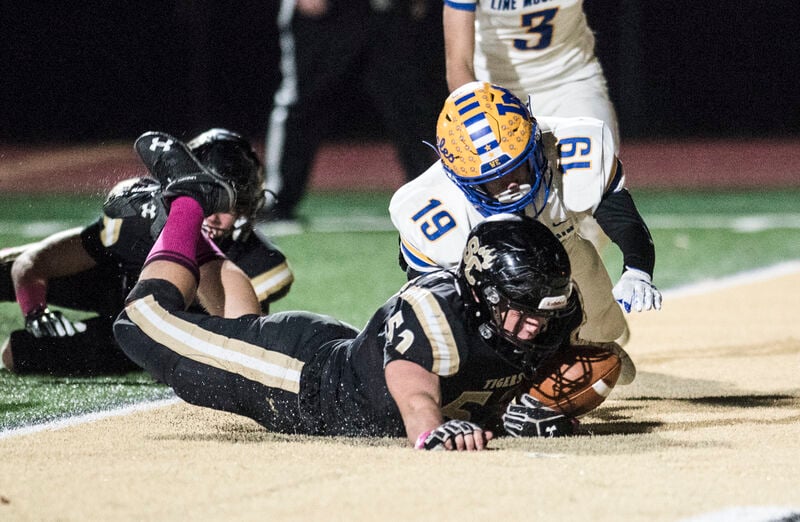 Southern Columbia’s Jaxson Purnell jumps on a loose ball in the endzone for a touchdown before Line Mountain’s Connor Finlan could pounce on it during Friday’s game.

Southern Columbia’s Jaxson Purnell jumps on a loose ball in the endzone for a touchdown before Line Mountain’s Connor Finlan could pounce on it during Friday’s game.

CATAWISSA — Gavin Garcia has put some mind-blowing numbers up this season, averaging more than 20 yards everytime he touches the ball.

So with just 133 yards on in Friday night’s District 4 Class 2A semifinal with Line Mountain, one would think the Eagles might have given the Tigers a run at Jim Roth Field at Tigers Stadium.

However, add his three touchdowns, and another strong defensive effort, the Tigers rolled to their 56th straight victory, this time a 49-7 victory over Line Mountain.

With the win, Southern Columbia (8-0) looks for a sixth straight district title next week against South Williamsport, a 35-18 winner on the road over No. 2-seed Troy.

Garcia scored two of his three touchdowns in the first quarter as Southern built a 28-0 lead in the opening quarter, scoring on its first four possessions.

The Tigers scored on three of their first seven plays, while the defense forced a pair of three-and-outs, and a turnover by the Eagles.

That was the beginning of a dominating performance for the Tiger defense, as it held Line Mountain to just 134 yards, all on the ground, including just 37 in the first half, and forced four turnovers.

While the defense carried the night, as Southern’s offense settled down a bit after the quick start.

“We jumped out early, but they didn’t quit, they responded and they came back and gave us some problems. We didn’t have the consistent gains and big runs for a lot of the second quarter like we have been having all season,” said Southern coach Jim Roth. “We felt we lost a little intensity after getting the early lead, and had a letdown in focus on execution. But the most pleasing thing about the win was the defense.”

Liam Klebon hit Jake Rose for a 45-yard touchdown pass on the second play from scrimmage, and then on Southern’s next drive, he hit Colin Sharrow for a 49-yard reception from the Tigers’ own 19 to flip the field, and two plays later, Garcia went in from 27 yards for his first touchdown.

Braeden Wisloski then ripped off a 32-yard run, and Garcia later found the end zone again from 12 yards to make it 28-0.

But from that point, Southern lost a fumble on its next drive and then the Eagles forced the Tigers to punt on back-to-back drives, and Line Mountain recorded three tackles for loss in the second quarter, including two on Garcia, as the Eagles tackled better against the Tigers than most teams have in recent years, just not enough to make a difference.

“Just not well enough. We had a blown coverage, we missed a tackle on the first touchdown and use didn’t play well enough and that’s the simple fact of the matter,” said Line Mountain coach Brandon Carson. “We knew we had to be pretty much mistake free, especially on special teams and with turnovers, and we weren’t. Hopefully, we can fix some things and keep playing and get a few more wins.”

Cut coming up empty on back-to-back possession didn’t faze the Tigers. They got their own turnover on an interception by Ian Yoder, who picked off two of the three passes that Line Mountain quarterback Jacob Feese threw on the night, and Garcia later scored his third touchdown just before halftime when he took it 56 yards on a halfback sweep on which no defenders came close to tackling him.

With a running clock for the entire second half, Line Mountain managed to drive it into Southern territory on its first possession of the second half that took up over seven minutes, but the drive ended when Yoder picked off Feese for the second time on the evening. Southern capitalized by scoring on its ensuing drive, capped when offensive lineman Jaxson Purnell recovered a fumble in the end zone after Wes Barnes lost it at the 1-yard line.

Yoder then capped Southern’s scoring when he ran it in for a 23-yard touchdown following Line Mountain fumbling the ensuing kickoff following the Tigers’ previous score.

Line Mountain would get on the board with a 23-yard touchdown run by Garret Laudenslager midway through the fourth quarter.