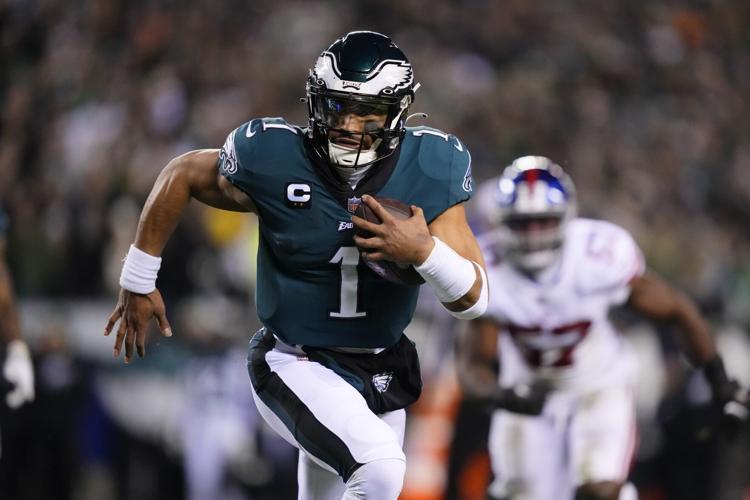 Philadelphia Eagles quarterback Jalen Hurts runs for a touchdown against the New York Giants during the first half of an NFL divisional round playoff football game, Saturday, Jan. 21, 2023, in Philadelphia. (AP Photo/Matt Rourke) 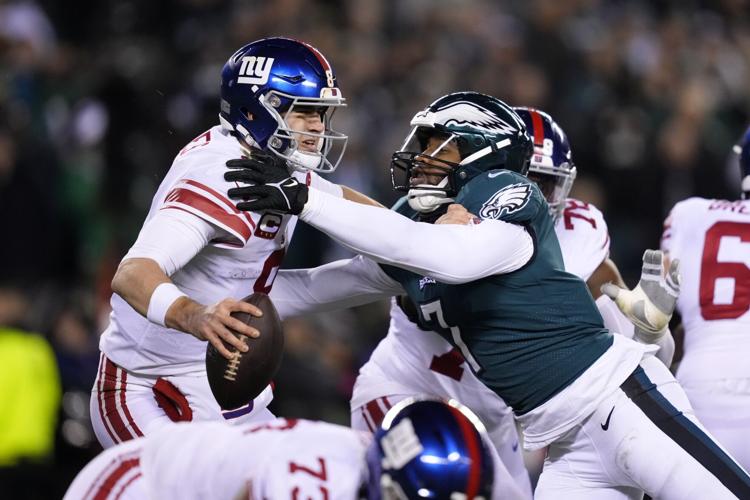 Philadelphia Eagles quarterback Jalen Hurts runs for a touchdown against the New York Giants during the first half of an NFL divisional round playoff football game, Saturday, Jan. 21, 2023, in Philadelphia. (AP Photo/Matt Rourke)

PHILADELPHIA — Jalen Hurts erased lingering doubts about the state of his right shoulder by throwing two touchdown passes and running for a score during a dominant first half, and the Philadelphia Eagles overwhelmed the New York Giants 38-7 on Saturday night in an NFC divisional playoff game.

Hurts is back, and so are the Eagles as a Super Bowl threat. Top-seeded Philadelphia will host the NFC championship game next Sunday against either Dallas or San Francisco.

Hurts missed two late-season losses with a sprained right shoulder and then showed the Giants nothing in the season finale when the Eagles ran a vanilla offense designed to protect the Pro Bowl QB.

Under bright postseason lights at the Linc, the Eagles unleashed an offense designed to clobber the Giants. Hurts dazzled early with his arm and Philadelphia’s offensive line opened big holes for Miles Sanders and Kenneth Gainwell as the Eagles finished with 268 yards on the ground. Hurts finished 16 of 24 for 154 yards.

“I think we were just starving, eager for an opportunity to come out here and play,” Hurts said. “We just wanted to come out and play our best ball. I think we chose the right time to do that. We were very efficient on both sides of the ball, we scored early and often. We just want to keep it going and be consistent.”

Hurts showed he was fine when he aired out a pass on the second play of the game and hit DeVonta Smith in stride for a 40-yard reception. The fun was just starting in Philly.

Hurts was flawless on the drive, completing passes of 9 yards, 5 yards, and then — boom — a 16-yard TD pass on a one-handed grab by tight end Dallas Goedert.

Second drive, more of the same. Hurts had completions of 12 yards and 9 yards en route to a 9-yard TD pass to Smith.

It was 14-0 in the first quarter and the Giants already needed a standing eight count. New York turned the ball over on downs on its first possession, and Daniel Jones was intercepted by James Bradberry on its second.

The Linc was bonkers with full-throated chants of “E-A-G-L-E-S!” filling the air and coach Nick Sirianni went wild chest-bumping assistants on the sideline.

Hurts’ shoulder may not have been 100 percent.

But his passing was: He went 7-of-7 for 89 yards in the first quarter.

“Yeah like they were saying. Anybody would look great at QB for the Eagles.. yeah ooook. HATERS MAN!! Jalen Hurts is SPECIAL,” Lakers star LeBron James tweeted.

Even when the calls were obvious for the Eagles, the Giants were helpless to stop them. Case in point: The Eagles had the ball on the New York 3. Give the ball to Boston Scott? Yes they did. Scott scored his 11th touchdown against the Giants for a 21-0 lead. He has only 19 TDs in his career. Giants defensive coordinator Wink Martindale riled up Philly fans this week when he insisted Scott wasn’t a “Giant killer.”

Hard to argue against that point now.

Hurts wrapped the half with a 5-yard touchdown run — he bobbled the shotgun snap but still coasted untouched into the end zone — for a 28-0 lead. There have been only four more lopsided first-half playoff shutouts in NFL history.

Gainwell finished with 112 yards on 12 carries, including a late 35-yard touchdown. Sanders had 17 rushes for 90 yards.

Coach Brian Daboll’s Giants were discombobulated from the start and looked nothing like the team that beat the Minnesota Vikings 31-24 last week for their first postseason win since their Super Bowl victory under Tom Coughlin 11 years ago.

Matt Brieda had an 8-yard TD run for the Giants in the third quarter. Daniel Jones was 15 of 27 for 135 yards and a pick.

Hurts ran, threw and directed the offense with the same authority as he did when he led the Eagles to a 14-1 start and won over a city that still wasn’t so sure about him in the preseason. In last year’s playoff loss to Tampa Bay, Hurts threw two interceptions and was just 23 of 43 for 258 yards.