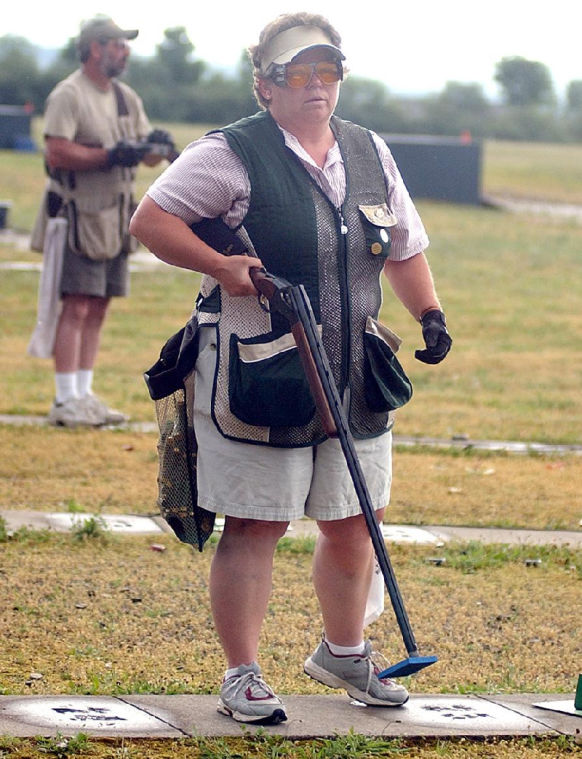 Janice Feaga, of Marriottsville, Md., moves to a different shooting stations between rounds at Tuesday's State Trapshoot in Elysburg 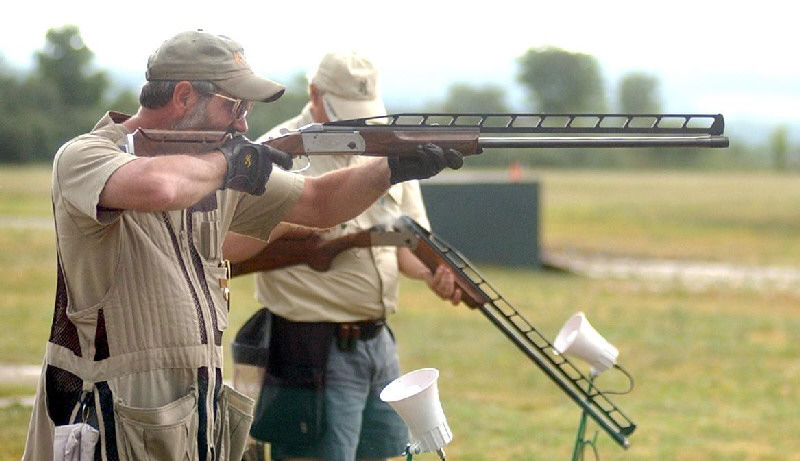 Calvin Hess, of Mertztown, shoots a perfect round during Tuesday's Pennsylvania Trapshoot in Elysburg. This is Mr. Hess's second year at the Trapshoot

Janice Feaga, of Marriottsville, Md., moves to a different shooting stations between rounds at Tuesday's State Trapshoot in Elysburg

Calvin Hess, of Mertztown, shoots a perfect round during Tuesday's Pennsylvania Trapshoot in Elysburg. This is Mr. Hess's second year at the Trapshoot

ELYSBURG -- The tink, tink, tink of hammer to metal each morning from the tiny, white trailer is all the vendors on the upper level at the Valley Gun and Country Club need to hear to know that it's 7 a.m. and Bill Mains is on the job. In fact, for the entire schedule of this year's 116th Pennsylvania State Shoot, you could set your watch by listening for the tap, tap tap as he goes about his job. Mains hails from Indiana and has been coming to the Pennsylvania shoot for five years. But, if you had to pick him out of the crowd, forget it. He barely gets outside of his workplace as the demand for his work is that high that he's lucky if he gets the time to enjoy lunch. But he wouldn't have it any other way and neither would his customers. "I love what I'm doing and don't look at my 7 a.m. to 8 p.m. days as being anything but what I want to do," Main said. "I don't go to work but just do what I like and people pay me to do it." What Mains does is high-grade shotgun engraving. But that's not to say you won't find his world-renowned handiwork on grip caps, barrel hangers, pistols, floor plates, trigger guards and just about anything associated with metal engraving. "I think I might be the only person in the world that still does personalized grip caps for customers," Mains said. "There are between eight and 10 popular models of shotguns and I personalize them to give the guns their own character. So, along with the small jobs, I also do the big jobs as well." And the list of clients that Mains has worked for over the years would be nothing short of a "Who's Who" in Celebrity Land. "I did an engraving on a gold watch for Dean Martin he bought for Sammy Davis Jr. on his 50th birthday and also designed one of Liberace's piano rings along with boxing rings for George Foreman, the Spinks Brothers and Mike Tyson," Mains said. "I also had the honor of designing the gold Lucille' pendent that B.B. King wears around his neck." Mains, 71, attended Bowman Technical School in Lancaster, which was one of only two jewelry engraving schools in the country, when he was 18. In 1959, he invented the rotary engraving foot wheel and by the 1960's was the main engraver for Colt. He started engraving full time in 1963 and for 27 years was the "hand engraver" for the city of Las Vegas. "Hand engraving is the most demanding of the fine arts and you need plenty of patience and a steady set of hands," Mains said. "It took me about eight years to master my craft but I can't think of anything else I'd rather be doing. I'm an artist that doesn't work for money though what I get paid for doing is great, but the praise from my customers is greater." In addition to doing engravings on pistols for luminaries such as Elvis Presley and Buddy Hackett, Mains was once late for a gun shoot in Southern California because he had to finish work on a 5-shot, .22-Magnum for Oliver North and basic scroll engraving on a rifle for Roger Smith, chairman of the board of General Motors. Steven Spielberg commissioned Mains to do a "Jaws" motif on his Perrazzi and the Great White's teeth were done with pure platinum. "Spielberg's gun was tough because I was having problems finding pictures of great white sharks, so he send 8-by-10 glossy photos of the mechanical shark they used in the movie," Mains said. "One of the hardest jobs I had was doing an engraving for porn star Marilyn Chambers because it was so hard finding any pictures of her with clothes on, but we did." With a world-wide customer base, why come to Elysburg? "It's true I haven't seen much shooting, if any, in the five years I've been here," Mains said. "But I love the area and used to own property along the Pennsylvania-New York border, plus this is the biggest shoot in the country and I can service many of my customers from the East while being here. "I wouldn't know what to do if I was retired and enjoy doing a job that brings plenty of satisfaction to the people who purchase the service."