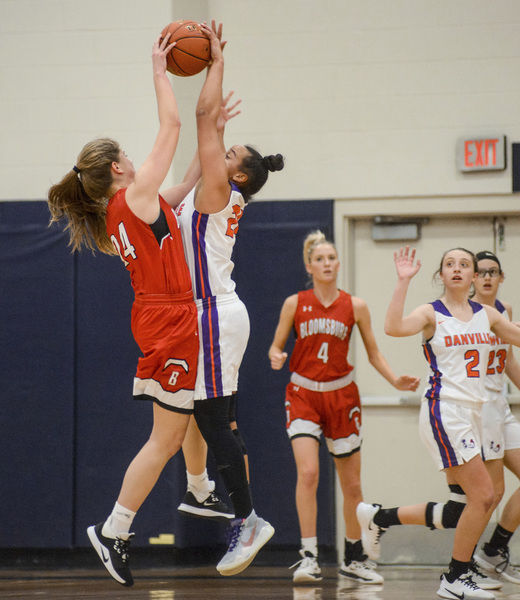 Danville's Linae Williams jumps and grabs the ball away from Bloomsburg's Kelsey Widom during the Pennsylvania Heartland Athletic Conference semifinal on Thursday night. 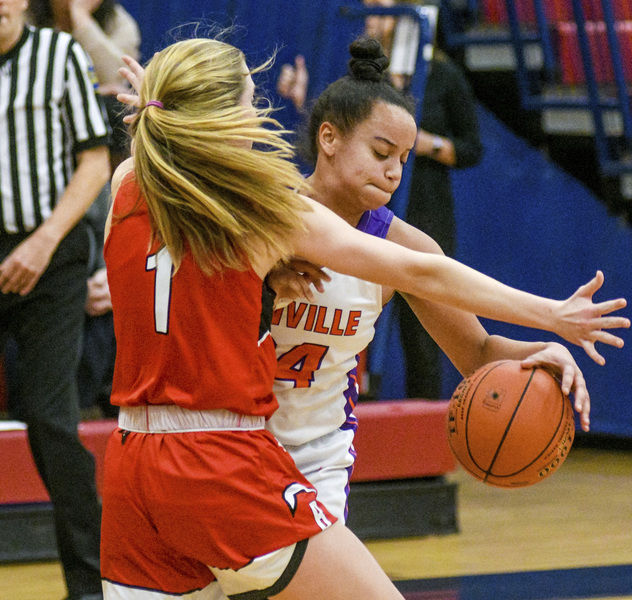 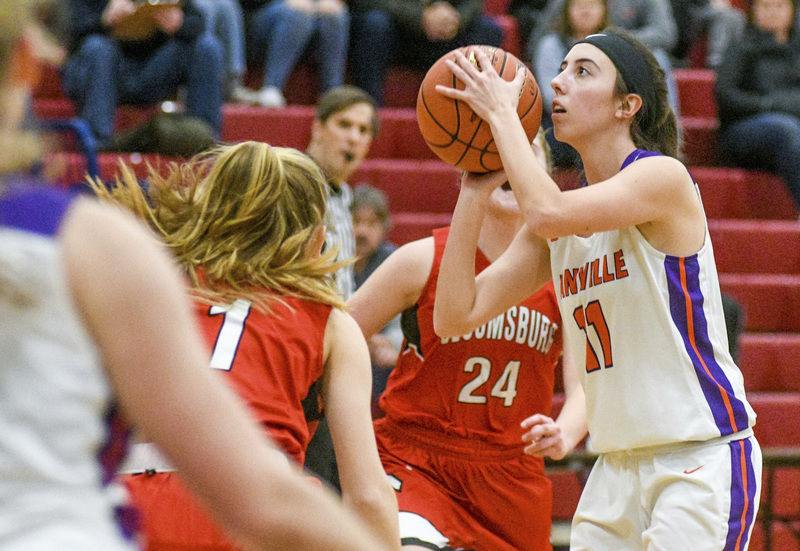 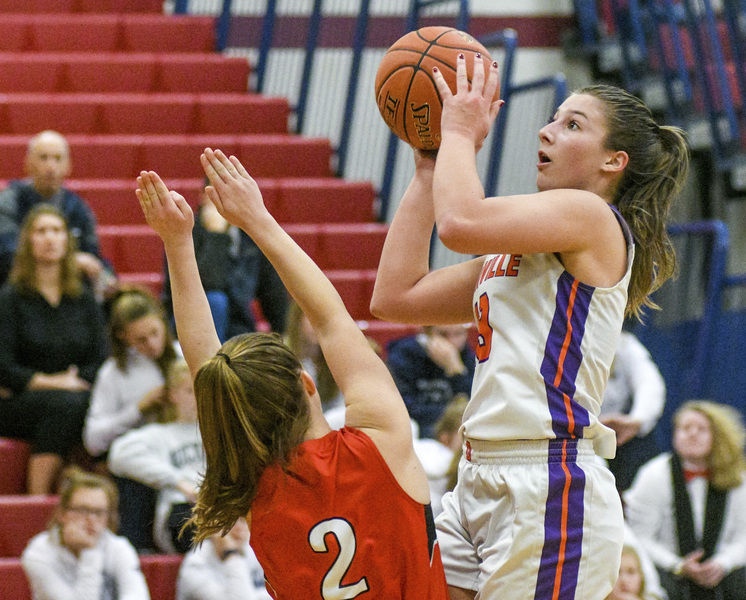 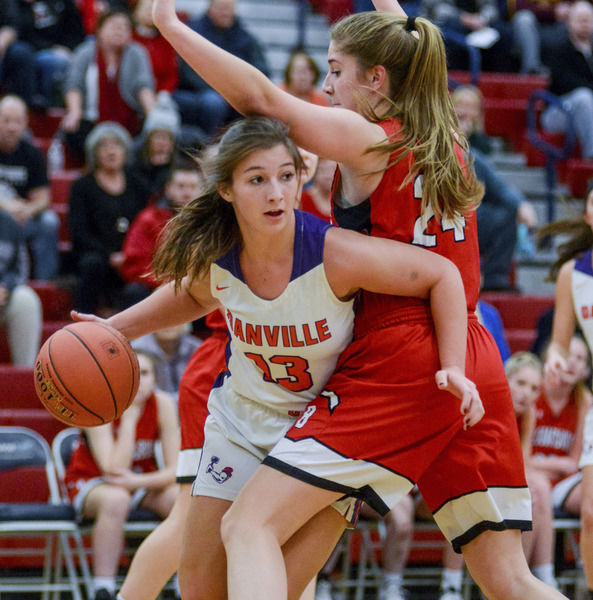 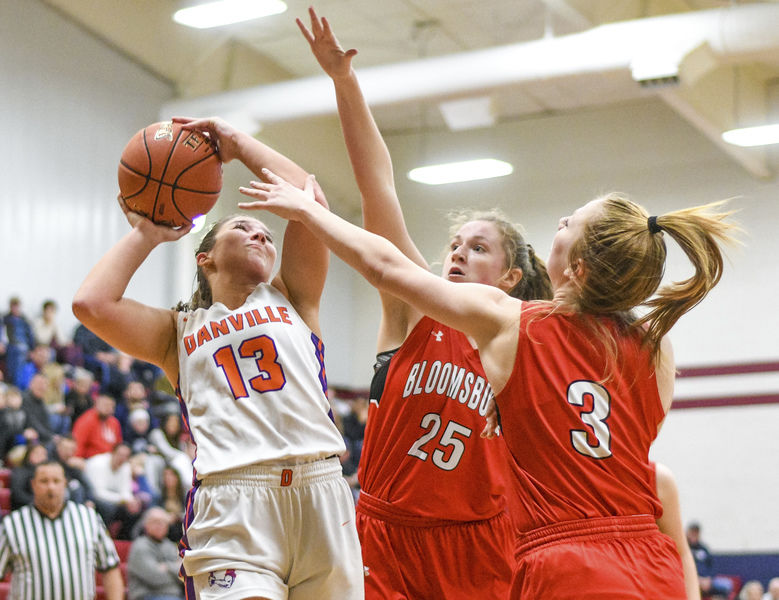 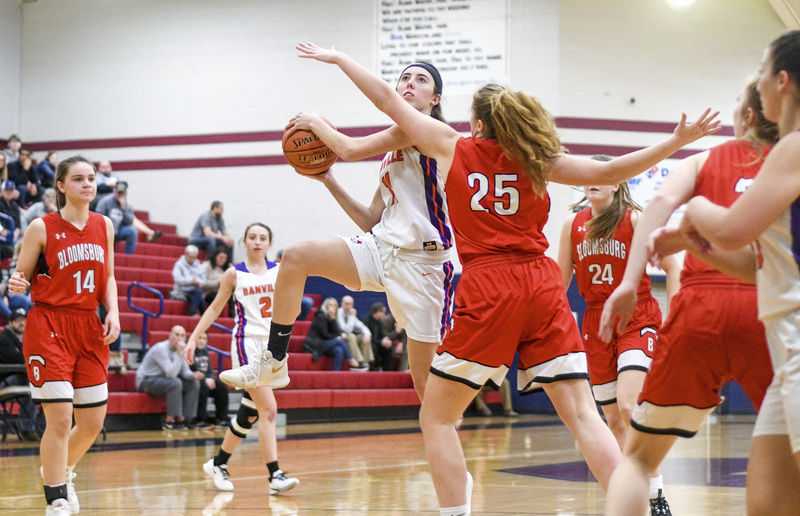 Danville's Linae Williams jumps and grabs the ball away from Bloomsburg's Kelsey Widom during the Pennsylvania Heartland Athletic Conference semifinal on Thursday night.

SUNBURY — Corinna Petrus made a steal on the opening possession of the Heartland Athletic Conference girls basketball tournament Thursday.

Not midway through the first quarter, Danville’s defense had caused so much havoc that it changed the complexion of the league playoff.

Bloomsburg, rushed on offense, missed a slew of high-percentage shots and fell too far behind to challenge the HAC-I champion Ironmen in a 49-23 game at Shikellamy’s Lockcuff Memorial Gymnasium.

“We want the gold medal, absolutely,” said Petrus, who posted game-highs of 18 points and 14 rebounds. “Last year — after losing to Mifflinburg in the final — left a sour taste in our mouths. We want it.”

It would make for a mini-revenge tour after Bloomsburg, the tournament wild card, and Loyalsock authored two of Danville’s three losses.

The HAC-III runner-up Panthers (18-5) won a holiday tournament matchup when Ironmen dynamo Williams was sidelined by a knee injury. On Thursday, Williams made an immediate impact with five rebounds and two steals in the first quarter. Petrus added four boards and pick in the period as Bloomsburg shot 2-for-10 and committed nine total turnovers to trail 12-4.

“They were hurrying their shots and had a lot of traveling violations as a result (of our defense),” said Danville coach Steve Moser, who posted his fifth 20-win season in his 14th and final year. “We stressed helping Corinna inside because they have a definite size advantage. I’m not sure, but very seldom did they have a one-on-one inside. We helped very, very well.”

The Panthers’ shooting woes continued well into the second quarter to a 2-for-18 clip and a 19-4 deficit. Playing just a half-RPM faster seemingly threw off every bunny, duck and peep they shot.

“That certainly contributed; it certainly helped Danville get ahead. I just think we didn’t finish,” said Bloomsburg coach John Wittman. “We’ve been sped up before; we faced that kind of pressure before and finished typically. I think what really hurt us is when we missed a few of those bunnies early, we really started getting frustrated with ourselves and really started to press. Then we seemed to miss more.”

“I know they have bigs, but I know how me and Kylee (Cush) get as our posts,” said Petrus. “If someone wants to fight, we’re not going to roll over. We’re going to fight them right back.”

The Panthers extended their zone to midcourt late in the first half, creating some chaos that fed an 8-4 closing run. However, even with Petrus somewhat shackled in the third quarter, the Ironmen extended their lead to 35-18. Williams drilled a 3-pointer early in the period, and Cush worked free for seven of her 11 points (just two off her career-best) — including a three-point play from a Petrus find, and a transition bucket off her own steal.

Williams had 10 points and nine boards, while Outt added seven and five.

“(Petrus) made the difference the first half, then Kylee and Olivia and they all picked it up,” said Moser. “We moved the ball extremely well in the second half.”

Danville pushed its lead beyond 20 points with two Petrus free throws at 5:55 to play, then cleared the bench with 2:20 to go.

“Obviously as a competitor, which we all are, it’s a setback,” said Wittman. “We want to win every game, but sometimes you have nights like this when it doesn’t go your way. We have a lot to play for yet. It’s a great opportunity for us to learn from this.”