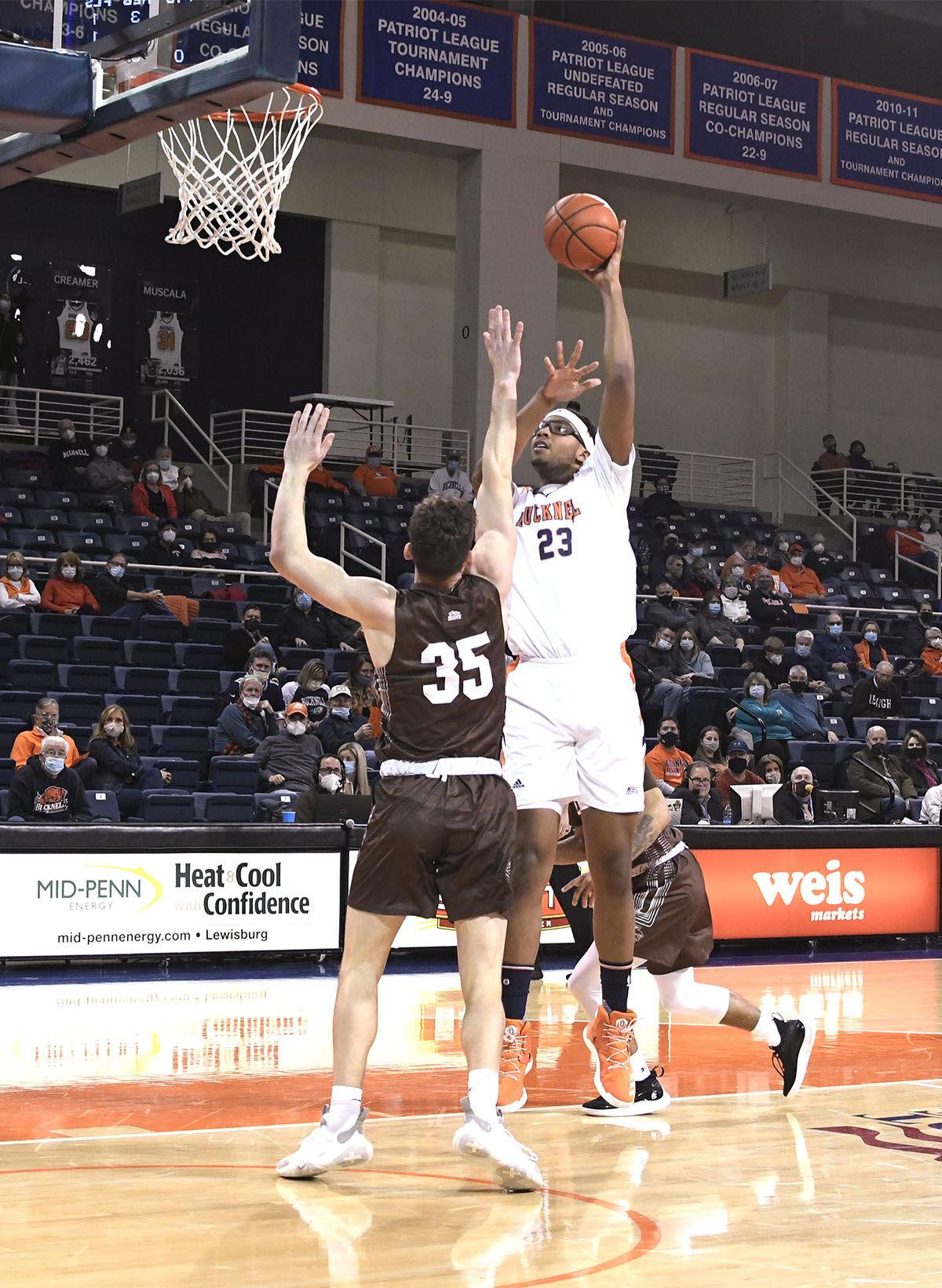 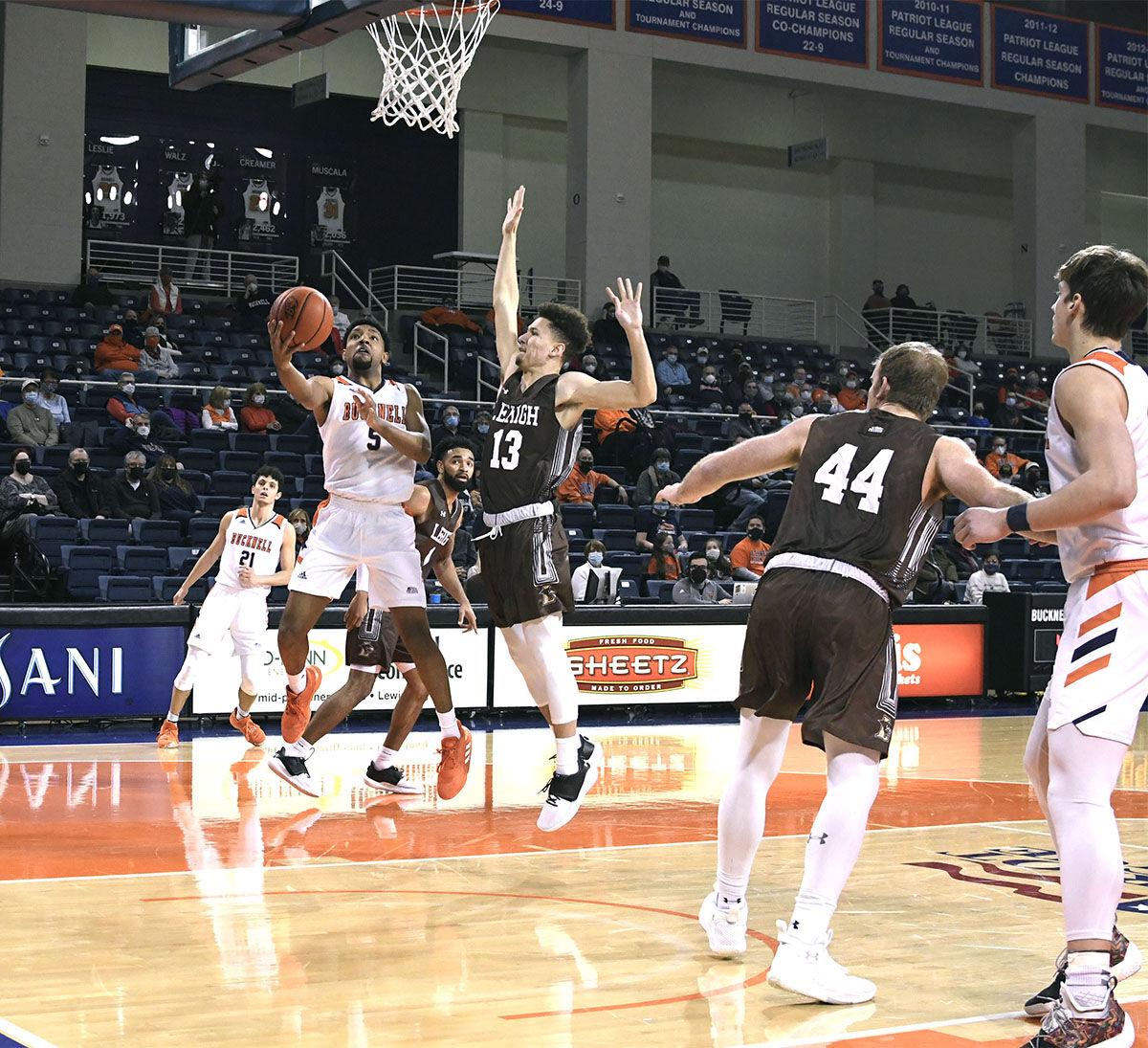 LEWISBURG — Keith Higgins Jr. made a lot of shots Thursday night, but the biggest play the Lehigh freshman made might have been a pass late in the first half.

Xander Rice hit a 3-pointer with 10 seconds left to seemingly give Bucknell some momentum heading into halftime. Higgins threw a long pass ahead to Evan Taylor, who hit a corner 3 at the buzzer to send the Mountain Hawks into the break with the lead and momentum.

"I thought a big sequence was the end of the half," Bucknell coach Nathan Davis said. "We got down the first half and fought back. We hit a 3 to cut it to eight, and gave up a 3 right away. Instead of going into half down eight, you're down 11. They come out and hit two shots, and next thing you know, you're down 15.

"With the way our year has been going, I thought we'd have a hard time coming back from that."

Lehigh dominated the second half on its way to a 97-64 win over the Bison in Patriot League men's basketball.

Higgins had career- and game-highs of 26 points and nine assists to lead the Mountain Hawks (6-11, 4-1). It was the sixth straight game Higgins scored in double figures. He scored just 27 total points in his first 10 games.

"I've adjusted to the speed (of college basketball) more than anything," Higgins said. "Initially, I was just moving a little bit too fast. I've had good talks with all my coaches. They told me to slow down, see the game and make the right reads. I think the move to the point guard position has really helped that."

Early on Thursday, it was Higgins' shooting that helped Lehigh stay in a close game. He scored 16 of Lehigh's first 18 points on 6-of-7 shooting to start the game.

"After I made the first two, I was feeling really good," Higgins said. "Coach (Brett) Reed was calling great plays. My teammates were making great passes, great screens, getting me the ball in the right spots. It was a fun half."

Despite the fact that Higgins was shooting so well, Bucknell (3-14, 0-5) got five straight points from Andre Screen to pull to within 22-20 just more than nine minutes into the game.

"We were getting quality shots early on and we were scoring the ball," Reed said. "Bucknell was playing great offensively, as well — making tough shots and knocking down open opportunities."

The Mountain Hawks outscored the Bison 19-7 over the next 7:30 to take a 41-27 lead with three minutes to play in the first half.

"Defensively, we really locked in," Higgins said. "We were hitting a lot of shots, obviously, but when we started getting stops is when the momentum really comes."

That's when Bucknell tried to make a push right before halftime. Screen, who scored a team-high 17 points, hit three free throws, and Rice drilled a 3-pointer for a 6-0 run.

However, Taylor's 3-pointer at the buzzer switched the momentum right back.

"It was good awareness from our guys to get the ball inbounds after a made field goal and push it hard," Reed said. "Keith Higgins had the ball. He had his eyes up, and he delivered the ball to Evan with just enough time. Evan had a very clean look at it. I'm glad that could be a positive-momentum play."

Higgins scored seven points in the second half and added five of his nine assists as the Mountain Hawks shot 10-of-16 from beyond the arc after halftime.

"I was seeing a lot of different coverages," Higgins said. "They started to pack the paint, so I was able to kick it out. My teammates made a lot of 3s."

"You've got to give Lehigh credit for executing and playing a great game," Davis said. "I've got to find a way to get us more aggressive defensively. I think we're way on our heels too much and people get comfortable. That will be the mission going forward.

"They were comfortable in what they were doing. We've got to get people playing faster and doing things they don't want to do."

"I give the young man a lot of credit," Davis said. "I can only imagine what he's going through, and his father. It's been a tough day for them; it's been a tough day for everybody around here. They're wonderful people, that family. They were at every game, and were tremendously supportive of our program, our entire team, our players.

"There's nothing you can say to describe how you feel for him and his father, Phil. He insisted on playing and being around. This is a team where he's got to do — and his family has got to do — what's best for him. It's an unprecedented situation, and they have our total support moving forward."